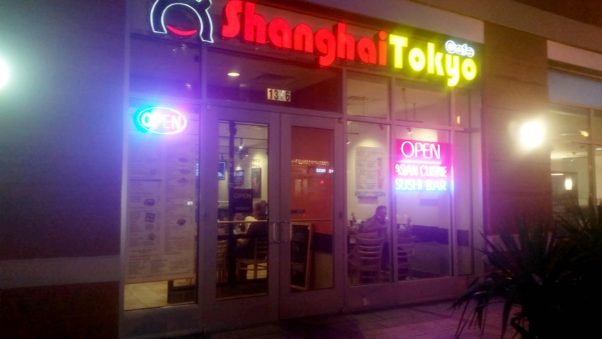 Shanghai Tokyo Cafe in Columbia Heights tries to serve all food Asian, but does not of it well. (Photo: Mark Heckathorn/DC on Heels)

Joe Chen opened the original restaurant at 8300 Baltimore Ave., College Park, in 2011 and added the Columbia Heights location in the summer of 2015. The College Park location has a slightly larger menu with tempura dishes as well as Udon noodle soup that isn’t available in D.C.

But a look at the menu and it seems like the restaurant doesn’t know what it wants to be. There’s sushi from Japan, Hunan chicken from China, rice bowls from Korea and green curry from Thailand. This is a restaurant having an identity crisis. Just look at the noodles options alone: Lo mein egg noodles, mei fun thin rice noodles, chow fun flat noodles, pad thai rice noodles and pa mi mao drunken noodles. 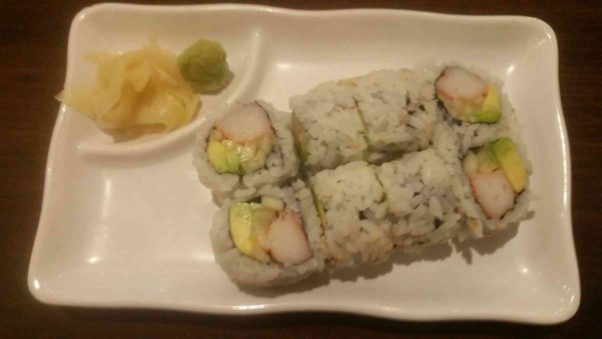 Unfortunately, this lack of clear identity leads to inconsistency in the food. The sushi I sampled over four visits was always fresh and tasty including the California rolls and the tempura shrimp rolls. In fact, the restaurant has a sushi counter where two people make the sushi fresh. However even though the menu says the sushi rolls have eight pieces, that only applies to the smaller, less expensive rolls with rice on the outside. The larger, more expensive rolls wrapped in seaweed actually only come with six pieces (and one of those pieces only had shrimp tails, no meat). Sushi runs from $5.25 for two pieces of sashimi or nigari to $15.95 for a sashimi bowl to $58.95 for a party tray of sushi. 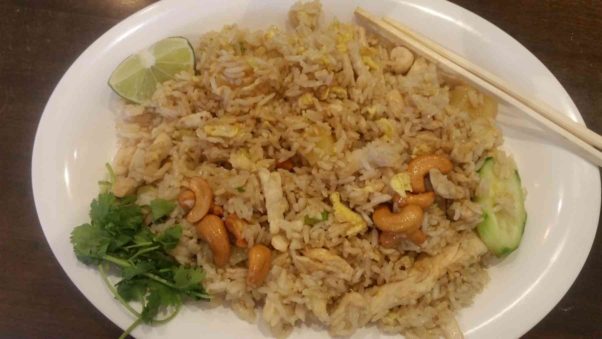 Look deep down under the rice for pineapple in the pineapple fried rice. (Photo: Mark Heckathorn/DC on Heels)

The kitchen puts out hit-or-miss dishes. The Thai pineapple fried rice with chicken on my first visit tasted like the cook just opened a can of Dole pineapple and mixed it into the regular chicken fried rice. Little, identically cut chunks of pineapple were underneath the rice. On that same visit, the gyoza, pan-fried pork dumplings were a big disappointment. I’ve had better and tastier dumplings from the frozen section of the Asian market.

But the drunken noodles with chicken were delicious. There was a good amount of chicken in the noodles and the heat level was just right. The serving size was adequate for the $9.25 price as well. But on my most recent visit, the chicken teriyaki bento box was tiny for $10.95. The chicken itself was tasty, though small. Also, while the menu said it included a California roll, it only came with four pieces, not the usual order of eight. The four fried shumai shrimp dumplings were microscopic and the “salad” consisted of some iceberg lettuce, one slice of cucumber and one slice of tomato, although the unidentifiable dressing was tasty. 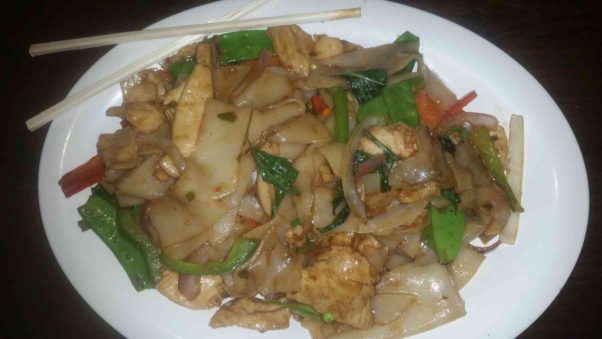 Drunken noodles is one of the better entrees at Shanghai Tokyo Cafe. (Photo: Mark Heckathorn/DC on Heels)

Service is also hit-or-miss. Sometimes the cashier is friendly and helpful. Other times, like when questioned about why there are only six pieces of tempura shrimp sushi when the menu says eight, she says not everything is printed on the menu and walks away. Or, when the busboy clears your table when you go to refill your soda despite still having food. Then when you tell him you weren’t done, he takes it out of the dish pan with the other dirty plates and garbage and sets it back on your table.

Credit card users beware. While the sign on the door indicates that the restaurant accepts all forms of credit cards, a tiny handwritten sign on the bottom of the cash register indicates an $8 minimum.

If you are in the neighborhood and hungry for a quick Asian bite to eat, Shanghai Tokyo can be ok, if you find a dish you like and stick with it. But it isn’t really worth the trip if you live farther than a few block walk, since I’m sure you can find better Asian cuisine at your corner Chinese restaurant or Panda Express.