Philadelphia-based Honeygrow opens the first of its two locations in the DMV today. The restaurant, the chainlet’s ninth location, is opening at 1100 S. Hayes St., Arlington, in the newly developed facade at the Fashion Centre at Pentagon City beside Shake Shack and clothing retailer Zara. 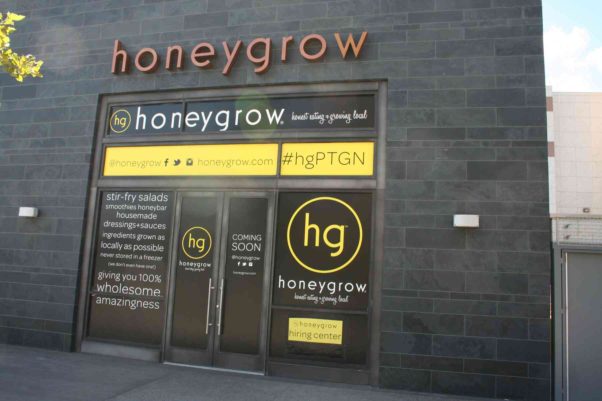 Honeygrow, the fast-casual stir-fry and salad restaurant, opens today in the addition to the Fashion Centre at Pentagon City.
(Photo: Mark Heckathorn/DC on Heels)

The fast-casual Honeygrow will open a second area location at 716 Seventh St. NW in Chinatown in the former Comfort One Shoes location across from the Gallery Place in late-fall or early-winter. It will also open two locations in Baltimore – one in Charles Village near Johns Hopkins Hospital and another in the new Harbor Point development between Harbor East and Fells Point. Both Baltimore locations are slated to open late this year.

“From Philly, we’ve watched a lot of concepts start in D.C. and then head elsewhere in the U.S., so I’m proud to be doing the reverse commute and bring something from Philadelphia to the D.C. fast-casual restaurant scene,” said Justin Rosenberg, founder and CEO, in a press release. The first Honeygrow opened in Philadelphia in 2012.

Upon entering the 24-seat restaurant, diners will not be greeted by cashiers, but find 24-inch touchscreens that allow them to customize stir-fries, salads, smoothies and Honeybar deserts, cups of fresh fruit topped with honey or maple syrup and other toppings like coconut flakes, dark chocolate chips and granola. There are currently six stir-fries and six salads on the menu or diners can create their own from the fresh ingredients (there are no freezers).

Each location is decorated with local photos on the walls and the touchscreens’ screensavers commissioned from area photographers. Pentagon City, which was designed by New York-based Jennifer Carpenter Architects and D.C.-based Streetsense, features concreate floors, an exposed ceiling, white subway tiles on the walls and dark wood accents. There is seating for 14 at tables and another 10 on stools at a counter along the wall. 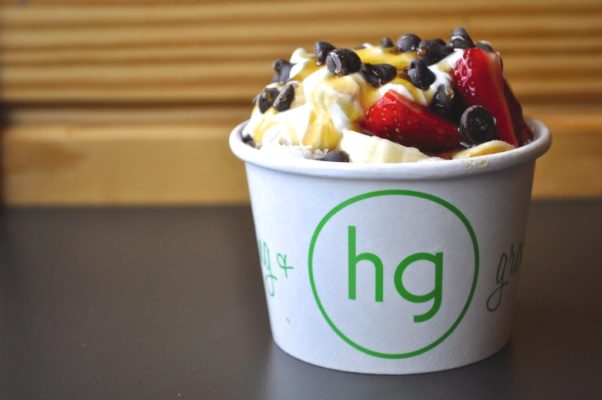 The menu from culinary director David Katz includes spicy garlic, sour cherry BBQ, sesame garlic, sweet soy five spice, red coconut curry and Philly roast pork stir-frys made with local, seasonal ingredients including freshly made egg white, whole wheat or rice noodles, brown rice, house-made dressings and sauces, and proteins that include Creekstone Farms beef, FreeBird chicken, turkey, pork, shrimp and tofu. Other local ingredients, most of which come from Pennsylvania, are listed on a board near the touchscreens each month.

In Pentagon City, stir-fry comes in Chinese to-go boxes and salad in clear plastic bowls. Brand manager Jen Denis explained this is because the store is small and meant to get diners in and out quickly.

Honeygrow is open from 11 a.m.-10 p.m. daily. Entrance is from the outside on Hayes Street. There is no access from inside the mall.