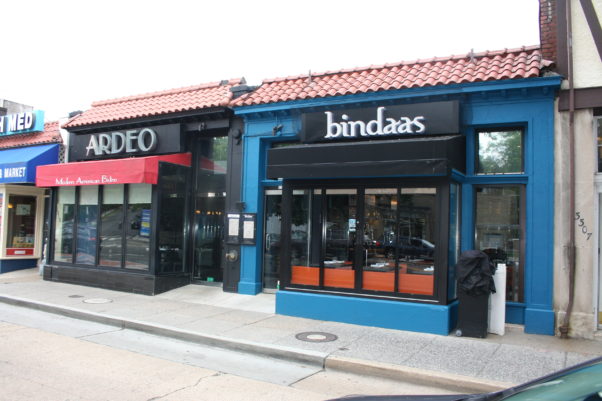 The restaurant replaces Bardeo, which has been incorporated into Bajaj’s Ardeo next door. (Ardeo and Bindaas are actually connected inside sharing a two-sided bar, kitchen prep space, restrooms and storage.) 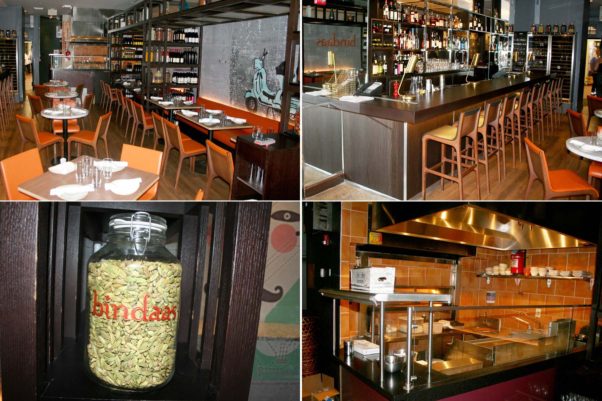 Martin Vahtra of Projects Design Associates of New York is responsible for the décor, which got a complete makeover with new flooring, acoustical tiles and furnishings. Perhaps the most noticeable change is the new Indian silk teal color on the exterior. The foyer features a wood wall of rustic reclaimed beams influenced by Indian screens and shutters dividing Bindaas from Ardeo.

On the opposite feature wall, there is a custom mural that represents Indian graffiti and street life framed by wood shelves stocked with jars of the 27 spices used most frequently in the kitchen and oils reminiscent of Indian market stalls. The interior is dark woods with slate gray walls with pops of orange on the chairs and banquettes. Custom pendant lights made from baskets hang from the ceiling, another nod to India’s food markets. New bar top lights create intimacy and the back bar has been redesigned with new display shelves to divide it from the Ardeo side, which will have its own bartender. 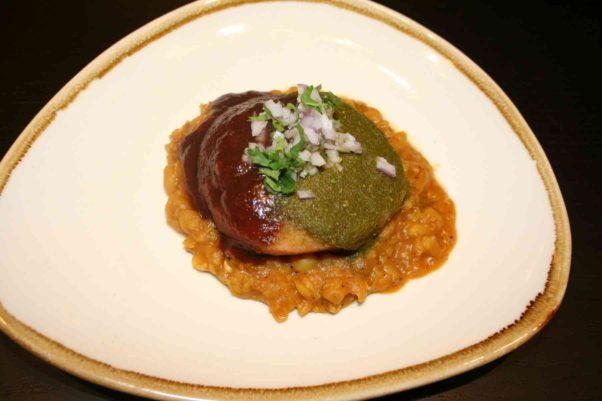 A tiny open kitchen allows executive sous chef Sunil Singh to create everyday Indian “delicacies.” While the kitchen does not have a tandoori oven, naan is being cooked in Bardeo’s pizza oven, which Nepomuceno said is working surprisingly well, although the naan has more of a flatbread shape than the traditional barrel shape.

Dinners can order small dishes priced at $15 or less. The menu does not have any curries but includes chaat, savory snacks such as ragda pattice, a spiced potato slice served on yellow peas with cilantro chutney and red onion; bhel puri, a seaside snack from Bombay with raw mangoes, lentils and puffed rice which is sweet and savory; and crab idiyappam, Southern-style rice noodles with fresh crab, coconut milk and curry leaf. Other dishes include chicken, lamb, salmon and cauliflower kebabs; a fish of the day; vegetable sides; uttapam rice pancakes; and four kinds of naan. There are also kathi rolls, warm wraps that come in flavors like Goan pork, chicken tikka masala, South Indian lamb and vegetarian pao bhaji. 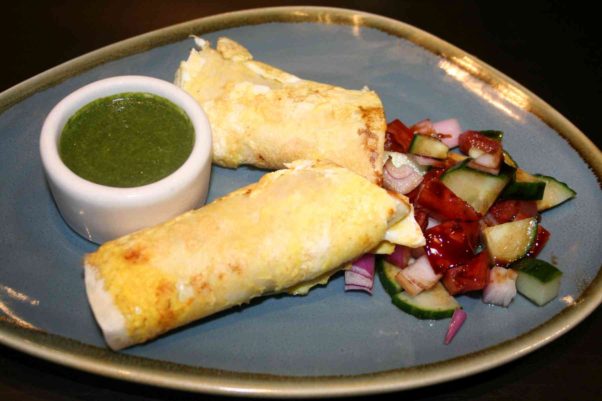 The drink menu includes mocktails and cocktails that incorporate Indian spices such as the Mumbai with Bulliet rye, house-spiced sweet vermouth and bitters; the Curried Away with gin, house-made tonic, lemon, ginger and egg foam; or The Silk Road with Old Monk rum, spiced mango puree and lime. There are also Indian beers and whiskey, 18 wines by the glass and even more by the bottle.