Paramount Pictures’ Star Trek Beyond had the lowest opening weekend of any film in the rebooted franchise, but still took first place last weekend (July 22-24) with $59.25 million. That was enough to knock Universal Pictures’ The Secret Life of Pets off after two weeks on top, as it fell 41.8 percent to $29.60 million and second place. The science fiction sequel starring Chris Pine, Zachary Quinto, Zoe Saldana and Idris Elba topped the box office, ending the five week mini-streak of animated films in first place. 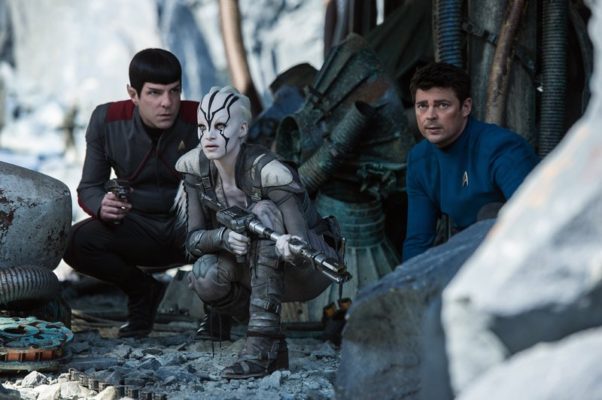 Star Trek Beyond, the third installment in the rebooted Star Trek franchise, opened 15.0 percent below the opening of 2013’s Star Trek Into Darkness and 20.7 percent below the opening of 2009’s Star Trek. It also opened slightly below the $60.1 million inflation-adjusted opening weekend of 1998’s Star Trek: First Contact. Still, with a first place finish far ahead of any its competitors, it should still be considered a solid win for Beyond. The film was a bit more front-loaded than its predecessors and may not hold up as well in subsequent weeks.

Twentieth Century Fox’s animated sequel Ice Age: Collision Course opened in fourth place with $21.37 million, far below the openings of any of the previous four installments in the animated Ice Age series. The opening was 54.9 percent behind that of 2012’s Ice Age: Continental Drift and 49.6 percent behind 2009’s Ice Age: Dawn of the Dinosaurs. The previous four installments had opened in either first or second, so Collision Course opening in fourth place can only be described as a disaster, especially when two of the four films beating it were holdovers instead of new releases.

Sony Pictures’ Ghostbusters fell 53.3 percent in its second weekend to fifth place, about in line with what was expected given the inflated buzz for its opening weekend and its mixed reviews. The science fiction comedy reboot has earned $86.27 million through 10 days, which is 11.9 percent behind the inflation-adjusted gross of 1984’s original Ghostbusters and 32.2 percent behind 1989’s Ghostbusters II through the same points.

Walt Disney Stuidos’ Finding Dory slipped 35.9 percent to $7.23 million and sixth place in its sixth weekend. It has earned $460.21 million through 38 days, further extending its lead as the highest grossing domestic film of the year, and is running 21.2 percent ahead of Toy Story 3 and 15.6 percent ahead of predecessor Finding Nemo’s inflation-adjusted gross through the same period.

Quality Flix’s conservative documentary Hillary’s America: The Secret History of the Democratic Party opened with $3.33 million in ninth place in its first weekend of wide release. Documentaries rarely crack the weekend top 10, not least during the crowded summer movie season, but positive reviews among Republicans and an election season unlike any other in memory combined to help the movie reach that rare threshold.

Rounding out the top 10 was Broad Green Pictures’ The Infiltrator starring Bryan Cranston. It fell 36.0 percent from its open the previous weekend to $3.39 million, taking in $12.27 million in 10 days.