Universal Pictures’ The Secret Life of Pets held onto the top spot at the box office last weekend (July 15-17) with $50.83 million, edging out the anticipated all-female Ghostbusters remake from Sony Pictures, which debuted with $46.01 million. Pets fell 51.2 percent from its massive opening weekend. It’s now earned $203.43 million through 10 days, placing it 9.7 percent ahead of Inside Out, 2.6 percent ahead of Despicable Me 2 and 5.8 percent behind Minions through the same period. 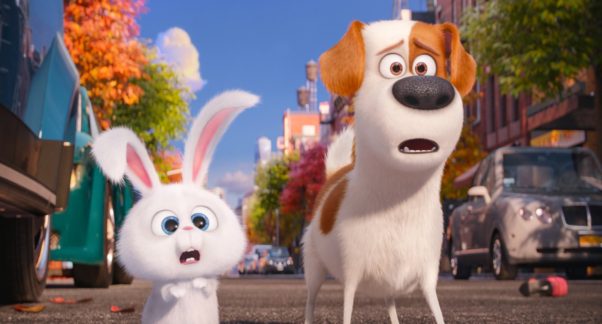 The Secret Life of Pets held onto the top spot at the box office last weekend with $50.83 million, edging out the anticipated all-female Ghostbusters remake. (Photo: Universal Pictures)

Sony’s much-anticipated Ghostbusters remake rode the buzz surrounding its all-female lead cast. The science-fiction action comedy starring Melissa McCarthy, Kristen Wiig, Kate McKinnon, Leslie Jones, and Chris Hemsworth rebooted the 1984 classic and notched the highest opening for a live-action comedy in more than a year. It also beat both the opening weekend and improved second weekend for the original 1984 film when adjusted for inflation by about 32.6 percent and 19.3 percent respectively, and came about 27.7 percent below the $63.69 million opening weekend for 1989’s Ghostbusters II when adjusted for inflation. With mixed reviews and high anticipation likely leading to a high opening weekend, expect the film to drop pretty significantly next weekend.

Warner Bros. Pictures’ The Legend of Tarzan dropped 45.5 percent to $11.44 million and third place. With $103.37 million through 17 days, it is running 7.2 percent behind the gross of 1999’s animated Tarzan through the same point, even without adjusting the original’s gross for inflation.

Walt Disney Studios’ Finding Dory became the highest-grossing animated film domestically of all time with $11.28 million, overtaking 2004’s Shrek 2 without adjusting for inflation while slipping 45.8 percent from the previous weekend. Finding Dory is running 81.0 percent ahead of predecessor Finding Nemo through the same point, or about 23.2 percent ahead when adjusting Finding Nemo for inflation. With $445.75 million to date through five weekends, Finding Dory is the sixth-highest animated film, behind The Lion King, Shrek 2, Finding Nemo, Aladdin and Toy Story 3, although it’s poised to pass the latter two films within the next few days.

Twentieth Century Fox’s Mike and Dave Need Wedding Dates fell 53.9 percent to fifth place with $7.68 million, for $31.48 million through 10 days. Universal’s The Purge: Election Year dropped 50.0 percent to sixth place with $6.81 million for $71.11 million through three weekends. It is running 12.2 percent ahead of second installment The Purge: Anarchy and 19.1 percent ahead of the original The Purge through the same periods. Warner Bros.’ Central Intelligence slipped 33.1 percent — the smallest drop of any of the top films last weekend — to $5.37 million and seventh place, for $117.58 million through five weekends.

Broad Green Pictures’ The Infiltrator proved a dud with a $5.30 million debut, although its relatively low theater count may have hampered its potential. The drama thriller starring Bryan Cranston got an early jump on the weekend by opening last Wednesday and has earned $6.77 million to date. With mixed reviews and a crowded summer schedule, this movie looks to fade fast and seems a poor follow-up to Cranston’s Oscar nomination last year.