Universal Pictures’ The Secret Life of Pets had one of the most impressive opening weekends for an original film with $104.35 million weekend (July 8-10), exceeding the cumulative weekend grosses of the next 10 highest films combined. The animated family film about pets who escape from their owners and starring the voices of Louis C.K., Kevin Hart and Eric Stonestreet scored one of the highest opening weekends ever for an original concept film, excluding sequels and adaptations. Playing on 4,370 screens, the film also had the seventh-widest release of all time and the widest release of any film in the past four years, since The Dark Knight Rises in 2012. 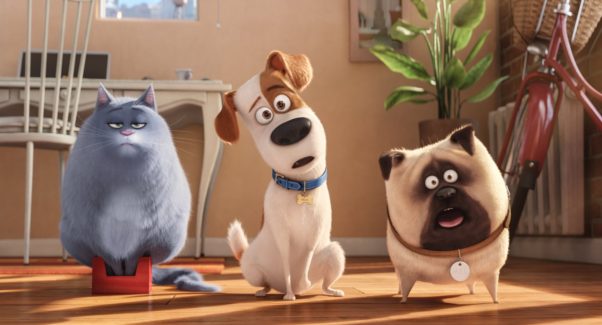 The Secret Life of Pets debuted in first place over the weekend with $104.35 million. (Photo: Universal Pictures)

With only one family-friendly animated film opening in the next five weeks — Ice Age: Collision Course two weeks from now — Pets should experience only mild declines in the month ahead and seems likely to end up as one of the highest-grossing films of the year.

Warner Bros. Pictures’ The Legend of Tarzan fell 46.6 percent to hold on to second place for a second week with $21.01 million. The period action film held onto its runner-up position at the box office. The movie has earned $81.80 million through 10 days, yet it still seems certain not to recoup its $180 million production budget. It’s running only 5.5 percent ahead of the $77.57 10-day start of 1999’s animated Tarzan, the last major film featuring the character, although when adjusted for ticket price inflation the animated version is running about 60 percent ahead through the same point.

The real story was third-place, where Walt Disney Studios’ Finding Dory dropped from first place, which it had held the previous three weekends. However, it did become the highest grossing movie of 2016. With $20.82 million last weekend, it reached $423.05 million total and overtook Disney’s follow release Captain America: Civil War, which has earned $406.24 million to date. Civil War is still selling tickets, but is clearly at the tail end of its theatrical run, unlikely to pass $410 million total. Dory‘s 59.5 percent decline to $20.82 million was clearly impacted by the release of Pets, as Dory had dropped a smaller 46.0 and 42.7 percent the previous two weekends with no real animated competition. Dory is running 85.1 percent above the $228.54 million 24-day start of predecessor Finding Nemo, and is still running about 30 percent ahead after adjusting Nemo’s 2003 numbers for inflation.

Universal’s horror sequel The Purge: Election Year took fifth place with a 65.7 percent drop to $12.39 million. Though it’s the highest percentage decline of any film in the top 10 last weekend, the number is in line with many horror films and is actually less than the 75.6 percent second-weekend decline of predecessor The Purge and just slightly more than the and 64.8 percent fall of The Purge: Anarchy. The third installment is now performing better than its two predecessors, after opening similarly the previous weekend, with its $58.80 million through 10 days running 13.4 percent ahead of the $51.85 million 10-day take of Anarchy and 13.2 percent ahead of the $51.96 million 10-day take of the original Purge.

Warner Bros.’ Central Intelligence slipped 47.89 percent to $8.03 million and sixth place, for $108.23 million total through 24 days. Steven Spielberg’s Disney release The BFG lost 65.6 percent in its second weekend to take in $7.81 million and seventh place, for $38.94 million total. That represents a virtually unheard-of second weekend drop for a family film, and cements this as one of the lowest grossing movies of Spielberg’s career. Twentieth Century Fox’s Independence Day: Resurgence dropped 64.1 percent to $7.78 million and eighth place, for $91.58 million total through 17 days. It’s running 54.0 percent behind the $199.00 million 17-day start of the original Independence Day, even though that film came out all the way back in 1996. Last weekend also took a 54.4 percent bite out of Sony Pictures’ The Shallows, which made $4.80 million in ninth place and has earned $45.83 million through 17 days.

Rounding out the top 10 is a perhaps-surprising entry: the Hindi-language movie Sultan. The Yash Raj Films production with Indian movie star Salman Khan had perfect timing with its story centered around both the athletic and personal life of a Indian wrestler training for the Olympics, which take place next month. The film opened in 283 theaters, about a tenth the reach of any other film in this weekend’s top 10, yet still managed to crack the top tier through positive word of mouth. Though largely unknown in the U.S., Khan has a huge international presence and is the 65th-most followed user worldwide on Twitter according to Twitter Counter.