Declare Your Independence from Boredom

If you are staying in the DMV for the long Fourth of July weekend or if you are visiting, you’re in luck. There is plenty to fill your weekend before Monday night’s fireworks from outdoor movies to an indoor concert and cool museum exhibits.

The second phase of Metro’s SafeTrack maintenance program wraps up this weekend. Red, Yellow and Green Line trains will operate on normal weekend schedules. Potomac Avenue and Stadium-Armory stations remain closed through Sunday. Orange Line trains will run every 15 minutes between Vienna and Eastern Market and between Minnesota Avenue and New Carrollton. Silver Line trains will run every 15 minutes between Wiehle-Reston East and Eastern Market and between Benning Road and Largo Town Center. Blue Line trains will operate every 12-15 minutes from Franconia to Arlington Cemetery from 7 a.m.-10 p.m. and every 20 minutes from Franconia to the Pentagon from 10 p.m.-midnight. On July 4, all stations will be open again and trains will run on a Saturday schedule until 2 p.m. then ramp up to rush-hour service for the fireworks. The Silver Line will only run from Wiehle-Reston East and Stadium-Armory, and the Yellow Line will only operate between Huntington and Mount Vernon Square. The third phase begins Tuesday with the section of track between National Airport and Braddock Road closed from 8 p.m. Tuesday through closing July 11. Blue and Yellow Line trains will operate in two segments. 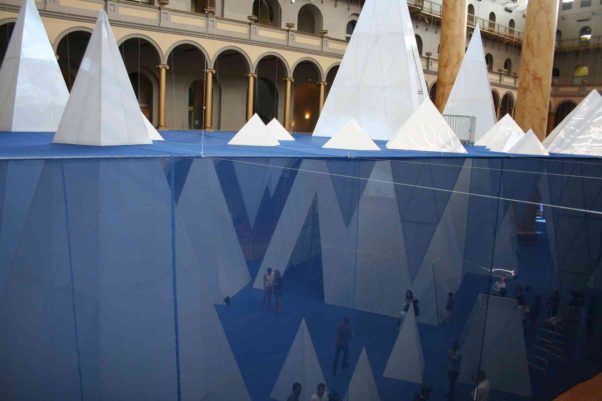 Explore the underwater world of a glacial ice field that fills the Great Hall of the National Building Museum this summer. Designed by James Corner Field Operations, which also designed New York’s High Line and Chicago’s Navy Pier, Icebergs has more than 30 prismatic triangular pentahedrons and octahedrons made from re-useable translucent polycarbonate panels ranging from 16- to 56-feet tall. Some are suspended from the ceiling and appear to float in the sea, represented by thin blue mesh that vertically bisects the exhibit. The tallest berg has a viewing area that visitors can reach from stairs inside it. To exit, you can slide down two “ice chutes.” kakigori shaved ice from Daikaya is for sale for $7, which museum-goers can eat while relaxing on one of the many iceberg shaped bean bags. This isn’t as fun or interactive as last year’s Beach display or 2014’s Maze, but from 6-10 p.m. every Wednesday night is Family Night with additional activities including related craft project, scavenger hunts, food vendors, music and dance performances. 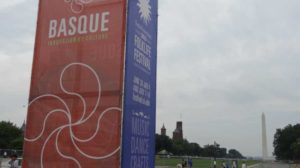 The annual Smithsonian Folklife Festival includes daily and evening music and dance performances, crafts and cooking demonstrations, storytelling and discussions of cultural issues. The theme of the 2016 program is Basque, the Sounds of California and On the Move: Migration and Immigration Today. This year, the Marketplace is located in the Smithsonian Arts and Industries Building, 900 Jefferson Dr. SW and open from 10 a.m.-5:30 p.m.

Through July 4 and July 7-10 from 11 a.m.-5 p.m. with special events including concerts at 6:30 p.m. every evening but July 4 on the National Mall between Fourth and Sixth Streets NW, north of the National Air and Space Museum. The nearest Metro station is L’Enfant Plaza. Admission is FREE! 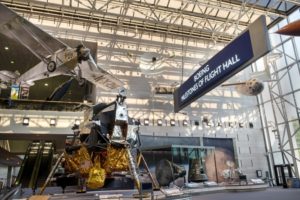 The Apollo Lunar Module displayed as a centerpiece below the “Spirit of St. Louis” in the newly renovated Milestones of Flight Hall. (Photo: Mark Avino/National Air and Space Museum)

The renovated Milestones of Flight Hall at the Air and Space Museum officially reopens today, adding a car-size 1964 Starship Enterprise model from the Star Trek television series, as well as an Apollo lunar module just like the one that landed on the moon in 1969. Another new display is “Go Flight,” a interactive video wall. Ceremonies to reintroduce and celebrate the hall will last all Friday night, into Saturday morning with All Night at the Museum featuring music, tours, a film festival, a scavenger hunt and more activities. The opening ceremony will begin at 8:30 p.m. on the museum’s North Terrace followed by the film festival staring at 9:30 p.m. playing air- and space-themed films including Le Voyage dans la Lune (A Trip to the Moon), Destination Moon, Galaxy Quest, 2001: A Space Odyssey, Top Gun and Hugo. Food trucks will be parked outside all night long for a midnight snack.

July 1 at 10 a.m. at the National Air and Space Museum, Independence Avenue at Sixth St. SW. Admission to the museum is FREE, although there may be a charge for some activities! 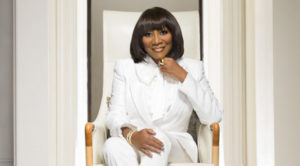 Patti Labelle plays tonight at Strathmore, with the 72-year-old diva belting out songs that span her career, from the disco-era Lady Marmalade to New Attitude and a handful of covers, such as Sam Smith’s Stay with Me. 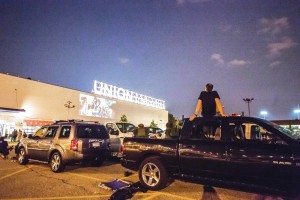 Union Market will show movies the first Friday of the month from July-October. (Photo: Joy Asico)

The Union Market Drive-In season is back the first Friday of every month through October and gets underway with the 1986 Tom Cruise classic Top Gun being screened on the big white wall outside the market. Other screenings include Ratatouille on Aug. 5, Grease on Sept. 2 and Ghostbusters on Oct. 7. 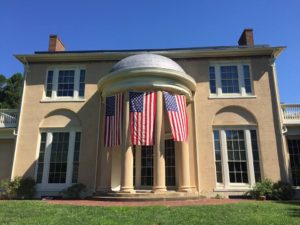 Tudor Place Historic House and Garden celebrates its Bicentennial Birthday with a party. Partygoers can play traditional American outdoor games, plant an heirloom seed to take home, make a patriotic fan, write a thank-you postcard to America’s servicemen and women and of course, enjoy a piece of the giant Tudor Place birthday cake from Dog Take Bakery while it lasts.

Fourth of July Celebration at the National Archives 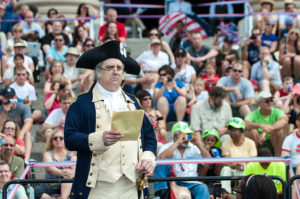 The Fourth of July Celebration at the National Archives is your chance to see the document that started it all, the Declaration of Independence. A dramatic reading, from actors portraying Thomas Jefferson, Benjamin Franklin, John and Abigail Adams and others starts at 10 a.m. outside. From 8-9:30 a.m., visitors can sign a facsimile of the Declaration of Independents then watch live performance on the Constitution Avenue stage from 9-9:45 p.m. Inside the museum from 11 a.m.-4 p.m. family-friendly activities including collecting autographs, making cockades, stories, making colonial-style wigs and dressing in period clothing, writing with a quill pen and setting your name in type. There will be American Heritage Chocolate tasting in the Visitor Orientation Plaza from 11 a.m.-4 p.m. and at 11:45 p.m. the National Independence Day Parade goes by. (See below.) 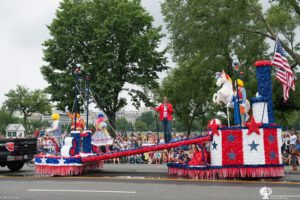 July 4 from 11:45 a.m.-2 p.m. along Constitution Avenue NW between Seventh and 17th Streets. Admission is FREE! Seating is available on the steps of the National Archives Building. 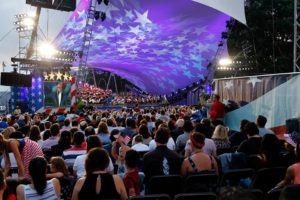 PBS’ A Capitol Fourth puts viewers front and center for the greatest display of fireworks in the nation. Broadcast live from the West Lawn before a live audience, this year’s concert is hosted by TV personality Tom Bergeron. Headliners include Grammy Award winning singer-songwriter Smokey Robinson and Grammy Award-winner Kenny Loggins. Other performers include Gavin DeGraw, Casadee Pope, Amber Riley, Jackie Evancho, Sutton Foster, Christopher Jackson, Yolanda Adams, the cast of On Your Feet and the National Symphony Orchestra. Season 10 winner of The Voice, Alisan Porter, will open the show singing the National Anthem. Local performers include the Choral Arts Society of Washington, Patrick Lundy & the Minister of Music, the U.S. Army Herald Trumpeters and the U.S. Army Ceremonial Band. Scott Hamilton and Gen. Colin Powell will also participate. The U.S. Army Presidential Salute Battery will perform Tchaikovsky’s 1812 Overture as the fireworks light the sky. (See below.)

July 4 from 8-9:30 p.m. on the West Lawn of the U.S. Capitol. Gates at the southwest corner of the Capitol grounds open at 3 p.m. Admission is FREE!

Fireworks on the National Mall 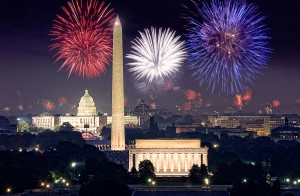 Fireworks light up the night sky over the monuments.
(Photo: Capitol Concerts)

Fireworks will light the sky over the National Mall on Independence Day. The display lasts 17 1/2 minutes. If you want to watch the fireworks from the National Mall, plan to arrive early to stake your spot and pass through security checkpoints. Remember to pack water and sunscreen. In addition to the Mall, other view areas include the U.S. Capitol, the FDR Memorial, Jefferson Memorial, White House Ellipse, West Potomac, East Potomac and Anacostia parks, the U.S. Marine Corps War Memorial (Iwo Jima) in Arlington, Gravelly Point, the George Washington Memorial Parkway, the Air Force Memorial on Columbia Pike, rooftop bars in the District or aboard a cruise on the Potomac River.

July 4 beginning at 9:09 p.m. at the Lincoln Memorial’s Reflecting Pool. Access to the National Mall begins at 10 a.m. Admission is FREE!