The Conjuring 2 Spooks Other New Releases

Warner Bros. Pictures’ The Conjuring 2 topped the box office with $40.40 million last weekend (June 10-12), the first time a horror flick took first place since the family-friendly horror Goosebumps last October and arguably the first “true” horror first-place finisher since Ouija in October 2014. The period horror sequel opened 3.4 percent behind the $41.85 million opening weekend of its predecessor The Conjuring in July 2013, and 8.8 percent above the $37.13 million opening weekend of its spinoff Annabelle in October 2014. With tough horror competition from The Purge: Election Year arriving in three weeks, it is difficult to tell whether The Conjuring 2 will match the impressive $137.40 million haul of its predecessor or end up closer to the $84.27 million take of Annabelle. 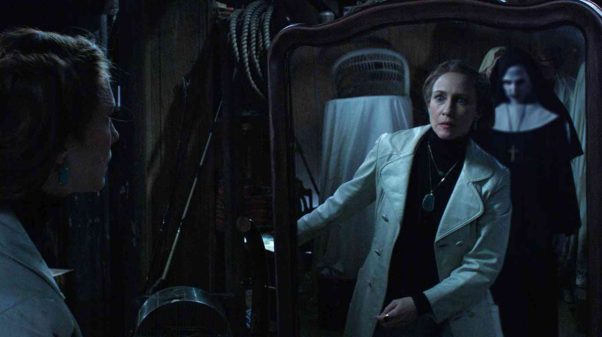 Universal Pictures’ Warcraft was unable to translate the popularity of its source video game into box office success, taking second place with $24.16 million. That was disappointing considering its high budget. The fantasy video game adaptation was released perhaps several years later than was optimal, considering that subscriptions to the game peaked in 2010 and are currently at less than half their peak, according to numbers from Forbes. Compared to some other recent fantasy game adaptations, Warcraft started 36.7 percent behind the $38.15 million opening of The Angry Birds Movie in May and 19.7 percent below the $30.09 million start of 2010’s Prince of Persia: The Sands of Time. Yet Warcraft has been performing significantly better overseas, even by modern standards where most blockbusters make the majority of their revenue outside the U.S.

Lionsgate’s Now You See Me 2 opened in third with $22.38 million. The thriller sequel with an all-star cast including Morgan Freeman, Mark Ruffalo, Daniel Radcliffe, Jesse Eisenberg and Michael Caine opened 23.7 percent below the $29.35 million opening of the original Now You See Me in May 2013. Don’t expect it to reach the $117.72 million cumulative total of the original.

The previous top finisher, Paramount Pictures’Teenage Mutant Ninja Turtles: Out of the Shadows, fell 59.3 percent in its second weekend to fourth place at $14.39 million. This was slightly lower than the 56.5 percent second-weekend drop of the previous Teenage Mutant Ninja Turtles in 2014. The sequel has grossed $60.63 million through 10 days, 48.5 percent behind the $117.76 million 10-day start of its predecessor, though it is running 30.1 percent ahead of the $46.60 million 10-day beginning of 2007’s reboot TMNT.