Walt Disney Studios’ tremendous year at the box office continued last weekend (May 6-8) as Captain America: Civil War debuted with a $179.14 million take. The blockbuster superhero sequel starring Chris Evans and Robert Downey Jr. registered the fifth largest opening weekend performance of all-time without adjusting for inflation. The film also claimed the third largest May debut ever, opening behind only 2012’s Marvel’s The Avengers and last year’s Avengers: Age of Ultron. Captain America: Civil War opened just 5 percent below the $191.27 million start of Age of Ultron and 4 percent ahead of the $174.14 million debut of 2013’s Iron Man 3. Marvel is responsible for the third (The Avengers), fourth (Age of Ultron), fifth (Civil War) and sixth (Iron Man 3) largest debuts of all-time. 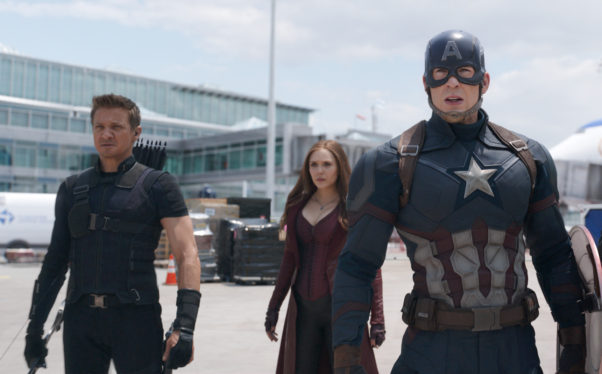 Due in part to strong reviews by critics and massive online pre-sales, Captain America: Civil War had been expected to open ahead of Avengers: Age of Ultron. While it didn’t quite reach the opening weekend heights of Age of Ultron, it is expected to display stronger holding power going forward. The movie also opened 9.5 percent ahead of the recent $166.01 million debut of Batman v Superman: Dawn of Justice and a very impressive 91 percent ahead of the $95.02 million launch of 2014’s Captain America: The Winter Soldier.

Disney also claimed second place last weekend as The Jungle Book took in $24.49 million. The blockbuster live-action computer animated hybrid dropped 44 percent from the previous weekend, as the film took an obvious hit from the launch of Captain America: Civil War. The Jungle Book will likely stabilize next weekend thanks to its strong word of mouth and not much being expected from either of next weekend’s two wide releases – Sony Pictures’ Money Monster and High Top’s The Darkness. The Jungle Book has grossed $287.60 million through 24 days of release.

On the heels of its modest debut, Open Road’s Mother’s Day held up well to place in third with $11.09 million. The ensemble comedy featuring Jennifer Aniston and Julia Roberts was up 32 percent over the previous weekend. Mother’s Day clearly received a boost from the Mother’s Day holiday last weekend and the film also appears to be going over far better with moviegoers than it has with critics. Its 10-day total stands at $20.81 million, which places the film 16 percent behind the $24.72 million 10-day start of 2011’s New Year’s Eve, which was also from director Garry Marshall. Whether Mother’s Day will be able to continue to hold up well after the Mother’s Day holiday remains to be seen.