10 Things to Do in the DMV This Weekend

Unfortunately the weather forecast calls for drizzle and a high of only 59 degrees on Friday, cloudy and a high of 63 degrees on Saturday and a high of 73 degrees on Sunday, but a 60 percent chance of thundershowers. But if you are able to spend some time outdoors this weekend, there is plenty to do including the Kingman Island Bluegrass & Folk Festival, Arbor Day festivities at the National Arboretum, the Georgetown French Market, Revolutionary War re-enactments at Mount Vernon and a Draft Day party at FedEx Field. There are a few indoor activities if Mother Nature doesn’t cooperate like the debut of the Raise/Raze exhibit at the D.C. Underground, Funk Academy at Lisner Auditorium and a Washington Chorus concert at the Kennedy Center. 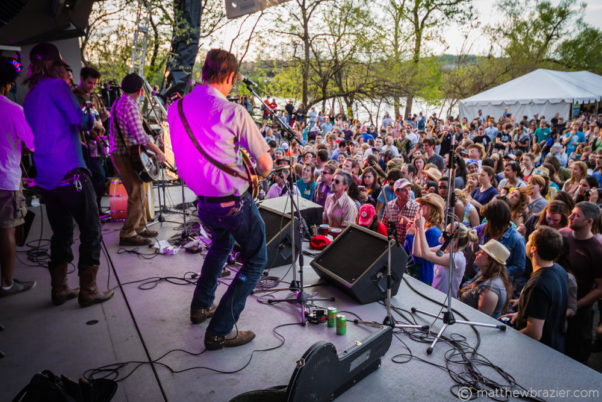 April 30 from noon-8 p.m. on Kingman Island, 575 Oklahoma Ave. NE (of RFK Stadium Lot 6 on the Anacostia River). Visitors can get there by taking the D.C. Street car to the Oklahoma and Benning Road stop or Metro to the Stadium-Armory Station then boarding a free shuttle. Admission is $25 in advance until midnight Friday and $35 at the gate. 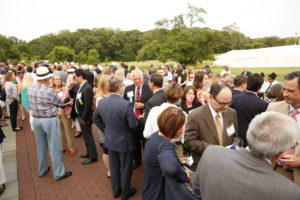 There’s no better place for Arbor Day Fest than the National Arboretum in Northeast Washington. A full day of events at the 412-acre “living museum” includes panel discussions on urban parks and cleaning up the Anacostia River; healthy cooking demonstrations; farmers Olympics; yoga; and an evening reception in the National Herb Garden with local jazz performers the Freddie Dunn Trio at 5:30 p.m., bossa nova artists the Rose Moraes Trio at 6:30 p.m. and R&B performers the Lauren White Band at 7:30 p.m., beer, cocktails and food from Cava Grill. Proceeds benefit the Washington Youth Garden. 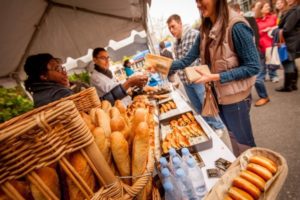 Celebrate the return of spring with the Georgetown French Market, now in its 13th year. The Book Hill neighborhood opens its more than 35 shops and cafes to visitors, offering sidewalk sales up to 75 percent off and French fare. Saturday’s events include live music from Swing Guitars D.C. from 11 a.m.-1 p.m., the Bitter Dose Combo from 1-4 p.m. and Mary Alouette and the Crew from 11 a.m.-4 p.m. and family activities from noon-3 p.m. including face painting, a caricature artist, a juggling unicyclist and a walkabout mime. There’s even a Parisian pup photo booth from 11 a.m.-4 p.m. On Sunday, live music will be from Laissez Foure from noon-3 p.m. with face painting and a caricature artist and live screen printing from noon-3 p.m.

April 29 and 30 from 10 a.m.-5 p.m. and May 1 from noon-5 p.m. in the Book Hill section of Georgetown along upper Wisconsin Avenue between P Street and Reservoir Road. Admission is FREE! D.C. Circulator rides are free on Saturday from the K Street and Wisconsin Avenue stops to Book Hill. 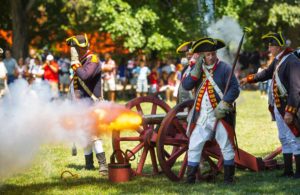 Step back in time and meet more than 700 reenactors during Mount Vernon’s Revolutionary War Weekend. This action-packed weekend is complete with cannons, cavalry, family activities and more. Learn about life in the 18th Century, discuss military techniques and watch re-enactments. Other events include a youth muster on the bowling green, military medicine, artillery, textile and dancing demonstrations and greeting “Lady Washington” and “General Lafayette.”

Celebrate the newest Redskins at the team’s Draft Day Party. There will be appearance by the Redskins 2016 draft picks including first-round pick Josh Doctson and the fourth and fifth round draft picks will be announced live from FedEx Field. Scandal’s Bellamy Young will be there. Players Pierre Garcon, Ricky Jean Francois, Preston Smith, Chris Baker and Josh Norman are scheduled to appear along with Redskins alumni Charlie Brown, Clinton Portis, Dexter Manley, Darryl Grant, Santana Moss and Rich Millot. Get autographs, visit the locker room, see the debut of the 2016 Redskins cheerleaders, watch a performance by the Redskins drumline, take photos with the Redskins’ Super Bowl trophies, test your passing and field goal kicking skills, dress like a Redskins player and more.

April 30 from 11 a.m.-4 p.m. at FedEx Field. Parking lots open at 10 a.m., gates open at 11 a.m. Enter at the Comcast Sportsnet Gate H. Admission and parking are FREE! Pre-registration is required. Access the stadium via Redskins Road or Garret A. Morgan Boulevard. Arena Drive will be closed. 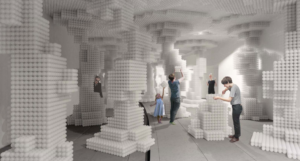 The more than 650,000 translucent plastic balls that filled the National Building Museum’s The Beach exhibition last summer have found new life this weekend at Raise/Raze in the Dupont Underground. The interactive architectural installation allows you to move around some of the balls, which are attached with Velcro. Hou de Sousa’s design reconsiders the concept of recycling by creating a dynamic, re-usable system that is activated by the visitor. Raise/Raze is like sand in a massive sandbox. Occupancy is limited to 49 people at a time. 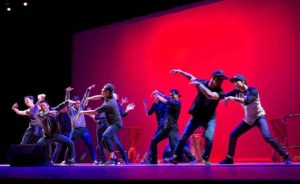 Capital Funk’s ninth annual hip-hop showcase, the Funk Academy, brings together rappers, dancers and dance crews, beatboxers, singers, spoken word and more from across the DMV, with groups such as Future Shock D.C., Culture Shock D.C., Phunktions and many more taking the stage. 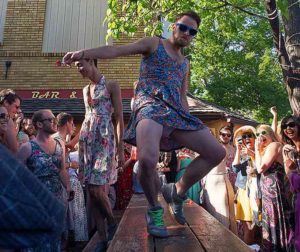 Hey guys: If you’ve ever looked at your wife or girlfriend’s sundress and thought, “Man, that looks comfortable,” here’s your chance to find out. The Wonderland Ballroom’s 12th annual Sundress Fest is about donning summer dresses for a good cause. The Columbia Heights bar shuts down Kenyon Street for a block party with a beer garden, live music, food trucks and the all-important Mr. and Miss Sundress Fest pageant. Anyone in a sundress gets all-day happy hour prices. Wear your own sundress or borrow one there. Proceeds from this year’s event benefit D.C. Central Kitchen.

Running of the Chihuahuas — Postponed due to weather!

Chihuahuas dash for the finish line at last year’s Running of the Chihuahuas. (Photo: On Tap Magazine)

The fifth annual Running of the Chihuahuas returns to the southwest waterfront this weekend with 96 Chihuahuas racing in groups of eight on a 60 foot race track for $500 in cash and prizes, food trucks from Sol Mexican, Red Hook Lobster Truck and Captain Cookie, beer stands, all-breed dog contests for best dressed dog and best trick and live music from Sly 45. The cost to enter a dog in the races is $25 per dog. Proceeds benefit Rural Dog Rescue. 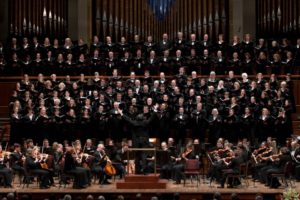 The Washington Chorus presents its Parisian Spring concert with a French repertoire including At the Lighting of the Lamps written by the chorus’ music director Julian Wachner. The program showcases the Requiem of Maurice Durufle. The concert features the Kennedy Center Concert Hall’s Rubenstein Family Organ with French organist Thierry Escaich, Durufles’ successor at Saint-Etienne-du-Mont church in Paris. The Washington National Cathedral Choir of Boys and Girls will join the chorus.