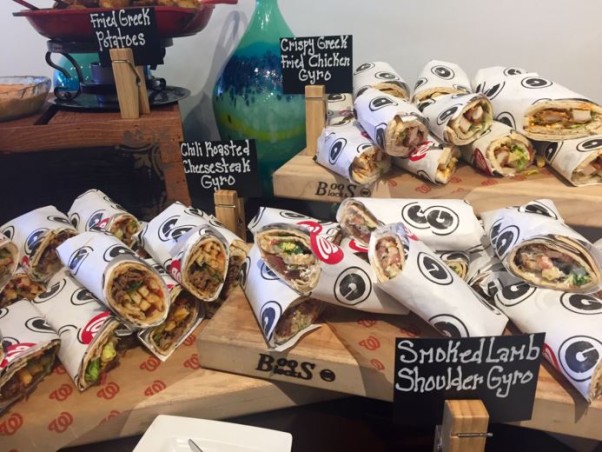 Mike Isabella will open two new stands at Nationals Park including Kapnos in the Park, which will serve gyros. (Photo: WTOP)

Kapnos at the Park will be a spin-off of his Greek restaurants serving gyro sandwiches, while Catchfly Kitchen offers Southern-style fried chicken and St. Louis-style ribs. The two will be located side-by-side on the Gallery Level, behind Section 301. Isabella already operates a location of G, his Italian sandwich shop, at Nationals Park on the Main Concourse behind Section 136.

The menu at the newest addition to the Kapnos family will include takes on Greek gyros. Pita will be stuffed with marinated lamb, chili-roasted steak, falafel and crispy Greek fried chicken. Hummus and tzatziki will be available as side orders, along with fried potatoes dusted with Aleppo pepper and served with Greek island sauce.

Catchfly Kitchen, a brand-new concept, will serve a menu led by fried chicken sandwiches and St. Louis-style barbecue ribs. Catchfly is named for a flower that is found throughout the South, with a nod toward one of the most common plays in baseball. Additional menu items include popcorn chicken, fried pickles and banana pudding.

Each stand will also offer a signature cocktail on tap. Kapnos at the Park will offer the watermelon lemonade cocktail that’s been a staple on 14th Street since the original Kapnos opened. Catchfly will serve draft mint juleps.

Suburbia, Gina Chersevani’s 1967 Airstream trailer that has been transformed into a mobile cocktail bar, opened for its fourth season on April 1 outside of Union Market, 1309 Fifth St. NE. 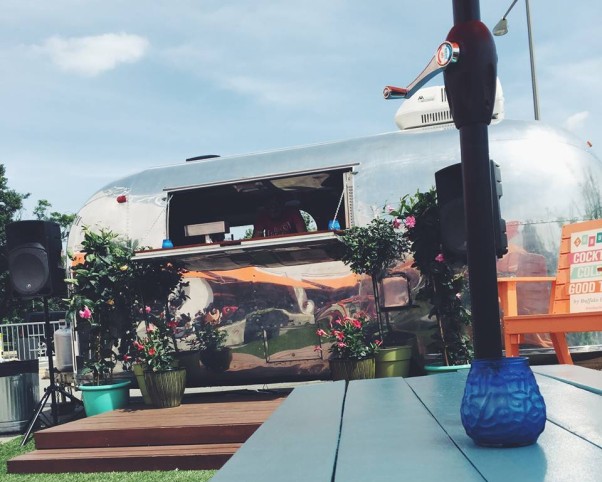 Suburbia, the bar in an Airstream trailer, has opened for the season outside Union Market.
(Photo: Union Market/Facebook)

New features this year include a white picket fence so the area in front of the service window is more defined and suburban. Also new this year is a four-tap lemonade stand that will serve non-alcoholic citrus-ades starting at $4. Another new feature is “Pinkies Out,” a special menu of five rotating bottles of rosé priced from $25-$72. There will also be monthly guest bartender nights with friends in the industry creating their own frozen and draft cocktail menus.

Suburbia serves 10 tap beers, two tap cocktails and six frozen drinks. It will be open from 3 p.m.-close from Wednesday to Sunday through the fall.

The Kitchen by Wolfgang Puck opens at Dulles

Chef and restaurateur Wolfgang Puck opened The Kitchen by Wolfgang Puck at Dulles International Airport. The original Kitchen is in Grand Rapids, Mich. The restaurant opened as part of the concessions overhaul by the Metropolitan Washington Airports Authority. 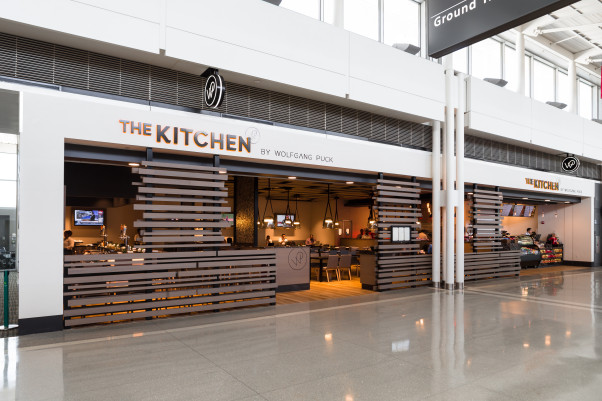 “I’m excited to introduce my newest concept to Dulles International and to the many visitors to the D.C. area,” Puck said in a press release. “Similar to our restaurant The Source in Penn Quarter, we will be using only the best ingredients for our menus.”

Travelers at Dulles can now order from a selection of seasonally focused, signature dishes and new items created with travelers in mind, such as house-made waffles and French-style omelets for breakfast, Chesapeake Bay crab cakes with basil aioli and a variety of artisanal pizzas. Diners can also choose from a selection of small plates, seasonal salads and entrée items such as brick chicken with Calabrian chilies and pesto, and pesto shrimp spaghetti with plum tomatoes.

Featuring a full-service restaurant, bar and to-go counter, The Kitchen is located along Concourse A at Gate A22 and is open for breakfast, lunch and dinner from 7 a.m.–9 p.m.

For a $30 donation, all of which goes to the non-profit that provides healthy meals and housing services to the homeless in the District, guests can enjoy $2 cocktails from 9 p.m.-2 a.m. on Sunday, April 3, along with free nibbles.

Chef Michael Mina is coming to town to present a pop-up dinner experience from his Mina Test Kitchen at Bourbon Steak at the Four Seasons Hotel, 2800 Pennsylvania, on Tuesday, April 5, with seating at 6 and 8:30 p.m. Cost of the dinner is $65. Wine pairings from Greece and Italy are an additional $55.

For the dinner, Mark Chaikowski Design will transform a private dining room into another world across the sea with warm blues, whites, tans, sands and textiles. 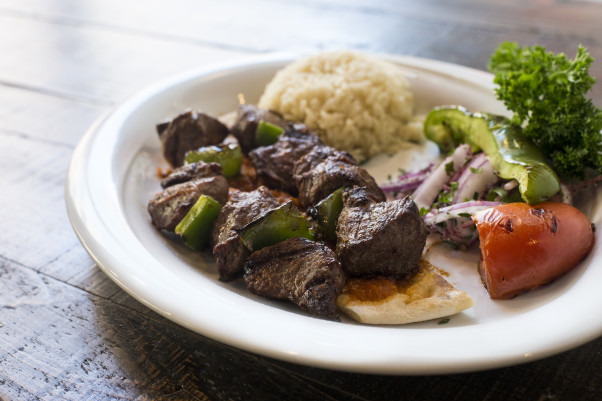 A meyhane is a Turkish communal celebration of food, drink and music. Diners will enjoy a traditional meyhane style dinner featuring the meze, salads and fish dishes enjoyed throughout the region as well as regional wine and raki. Tables will be grouped in long rows, emulating the communal, sharing environment of a meyhane. Roaming musicians will play traditional music.

The first course is meze followed by the hot meze, salads and the main course. The meal concludes with fruit, baklava and Turkish coffee. Guests will choose a glass of Turkish wine or raki, a Turkish liquor. They also choose their entrée from a selection of grilled fish, chicken or lamb kebabs or a vegetarian option. There will be no menu, so diners are served whatever meze the kitchen sends out.

Cost is $80 per person for the multi-course meal that includes hot and cold meze, entrée, dessert, coffee, wine or raki. Reservations can be made online. 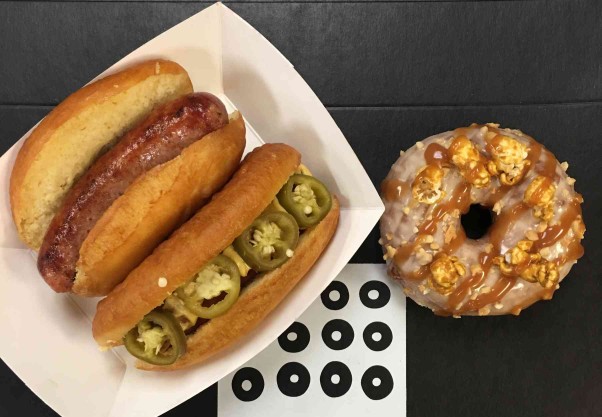 Astro has partnered up with local sausage maker, Meats & Foods, to serve a half smoke in between a hotdog shaped doughnut bun ($6.75) served with Gordy’s pickled jalapeños and mustard. A “Peanuts & Cracker Jack” doughnut ($2.65), made with caramel glaze, peanuts, Fishers Popcorn from Ocean City and topped with a caramel drizzle, will also be available. A doughnut and sandwich are available for $9. 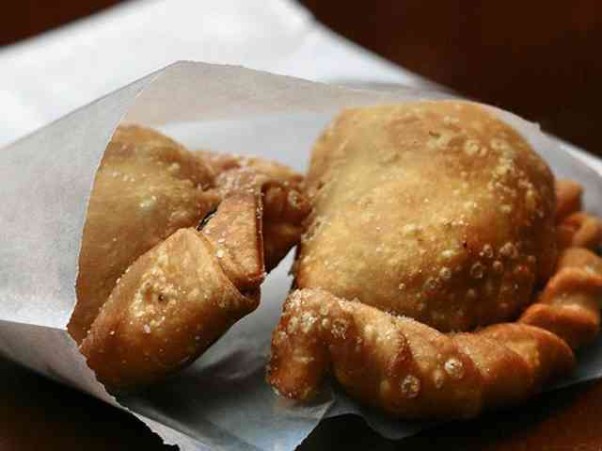 RPM Italian, the restaurant from co-owners Bill and Giuliana Rancic coming to 601 Massachusetts Ave. NW in May, has hired Gabe Thompson as its executive chef. 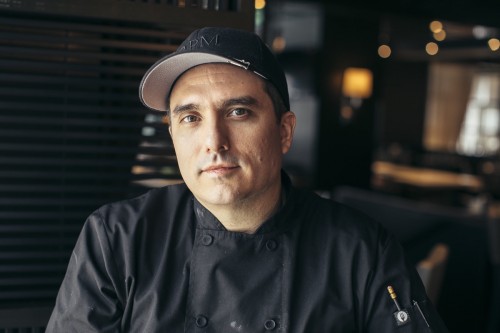 Gabe Thompson has been tapped as the head chef at the new RPM Italian, set to open in May. (Photo: RPM Italian)

Thompson comes to D.C. from New York, where he is a partner with the restaurant group that owns Italian restaurant Dell’Anima, L’Artusi, and L’Apicio. He says he’s still a partner but not actively involved in operations anymore. Thompson’s wife is from Arlington.

Recently, Thompson has spent time learning the ropes at the Chicago location. Unlike Chicago, the D.C. location will offer lunch. It bakes its own bread that Thompson will use for sandwiches in addition to pizzas, pasta and other entrees. Signature dinner dishes include house-made pastas.