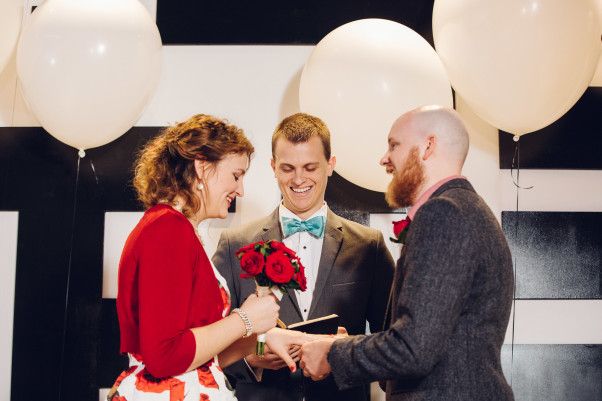 A couple exchanges vows during their wedding at &pizza in Columbia Heights.
(Photo: Rachel Couch for Pop! Wed Co.)

The pizzeria, which just opened a week ago at 1375 Kenyon St. NW, was transformed into a pop-up wedding chapel Monday. The shop was filled with flowers and guests were treated to a special menu for the ultimate pizza lovers’ wedding. There was also a licensed officiant on hand to make the vows legit. The only thing the couples had to provide was the D.C. marriage license.

Last year, Katie Hendrickson and Michael Moyer were the first to have an &wedding at &pizza’s U Street location. This year, four couples got married, two couples had commitment ceremonies and five couples renewed their vows, according to an &pizza spokeswoman.

Jennifer Bester and Jon Julio were one couple who got married. The couple, who met on Match.com, has been together for a year a half. They both attended George Washington University as graduate students, but didn’t know each other there.

“We’re able to have a little bit of tradition, but in a totally non-traditional setting,” Bester told the GW Hatchet.

They both graduated from GW in 2007; Bester with a degree in forensic science and Julio with a degree in engineering management. They both ended up working at Booz Allen Hamilton. She is a senior lead IT technologist and he is an associate.

They both love sports and often went running, ending at the &pizza in Dupont. It was Bester who first heard about the promotion. “I saw the pictures and it looked like any venue – very classy – and we were like ‘deal sealed,'” she said. 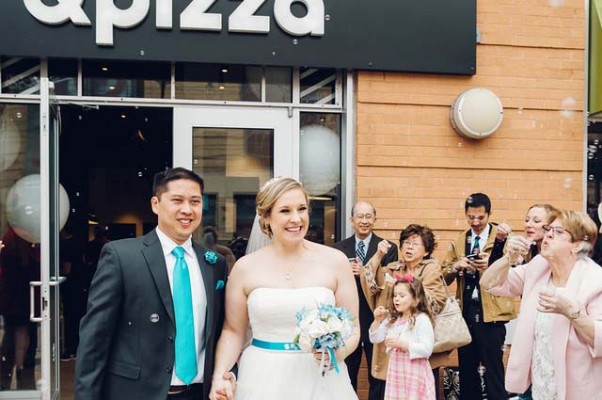 The mathematically inclined couple told the newspaper they first dreamed of a wedding on Pi Day since they ran the Baltimore Shamrock 5K in specially-ordered green Pi Day shirts last year.

“Pi goes on for infinity, like love. It has so much in common with it,” Bester said.

Although it may be unconventional, Bester said the low-key profile of a pizza shop wedding was exactly what they were looking for. “After a certain age you don’t want pomp and circumstance.”

Although &pizza and Pop! Wedding Co. also supplied a professional photographer as well as food for the reception, each couple was encouraged to add their own touches. Bester’s father gave her away and the couple added meaningful Bible verses and quotes. Another couple added the Jewish tradition of breaking a glass after the ceremony.

Steven Gauden, co-founder of Pop! Wedding Co., was the officiant. The couples also received a gift box with a bottle of red and white wine and &pizza t-shirts.