Come the summer of 2017, chef Mike Isabella hopes to open Isabella Eatery in the Tysons Galleria mall. The 10-concept food hall with full-service, fast-casual and retail options will include some familiar brands like Yona and Pepita along with some new ones. 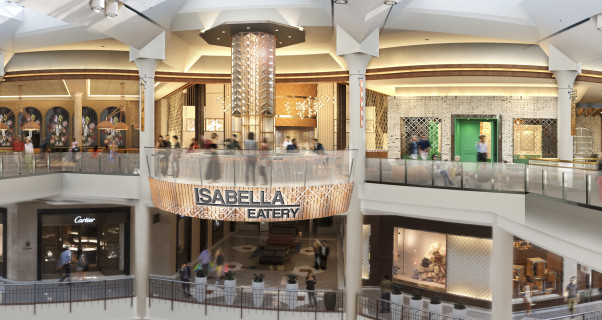 The 41,000-square foot, 600 seat food hall will take over the former Piazza di Giorgio at 2001 International Dr., McLean, and surrounding space on the mall’s third floor.

“This is by far the biggest project we’ve ever taken on,” Isabella said. “But I think we are uniquely positioned to succeed here. All our great Mike Isabella Concepts chefs are on board and bringing their individual perspectives and flavors to Isabella Eatery. Each of our other openings and events have paved the way for this.”

Made up of nine distinct eateries and a cocktail bar, Isabella Eatery will include returning Mike Isabella Concepts brands like Yona and Pepita, as well as brand-new concepts such as a gourmet coffee shop and a classic ice cream parlor. 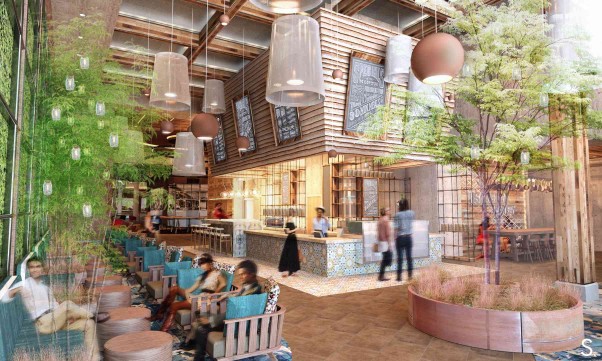 Five of the concepts will share common dining space, while two others will be enclosed.
(Rendering: Streetsense)

Isabella Eatery will include nine restaurants and a cocktail bar including:

Arroz, the first Spanish concept from Isabella will include a menu of tapas, paella and cured meats.

Graffiato, based on Isabella’s flagship Italian restaurant in Chinatown, won’t have a wood-burning over, but will serve a selection of Graffiato favorites along with paninis and a thick-crust style of pizza similar to Sicilian pies.

Kapnos Marketa, a spinoff of the restaurants on 14th Street NW and Clarendon, will offer spit-roasted meats by the pound, Greek spreads, salads phyllo pies and other fare to go only.

Non-Fiction Coffee will feature beans from artisan roasters along with sandwiches, soups, salads, pastries and fresh juices in a lounge-like setting.

Octagon Bar, located near the center of the dining area, will overhang the mall’s lower level and serve an extensive list of prohibition-style classic cocktails.

Pepita, a sister to the original cantina in Clarendon, will serve Mexican dishes like tacos, nachos and quesadillas. The full-service bar will also offer a small Mexican beer selection along with classic and frozen margaritas.

Requin Raw Bar, based on the Merrifield pop-up slated to move to the new Wharf Development on the Southeast Waterfront, will serve a variety of oysters, seafood cocktails and crab cakes along with a selection of Champagnes and white wines. Caviar and cured fish will also be available for retail purchase.

Retro Creamery will be a modern take on old-fashioned soda shops with egg creams, floats and ice cream by the scoop. Ice cream will also available in pre-packed cartons to go.

Trim is a self-contained restaurant that will serve Mediterranean small plates and grilled meats. (Trim was originally designed as an American chophouse, but was too similar to Wildfire, which is location on the same level of the mall.)

Yona, a sister to the original location in Clarendon, the Japanese/Korean noodle bar will focus on quick and easy meals including ramen, poke and donburri rice bowls.

Arroz, the Octagon Bar, Pepita, Requin Raw Bar and Yona will share a 300-seat common area, where diners will be able to order from any of the five menus. Graffiato and Trim will each have dedicated seating, while Kapnos Marketa will be packaged food to take home.

An executive chef and general manager, both yet to be named, will oversee the high-end food emporium’s 10 concepts and 10,000-square-foot kitchen. The food hall will be open from 9 a.m.-10 p.m., except for Non-Fiction Coffee, which will open at 6 a.m. 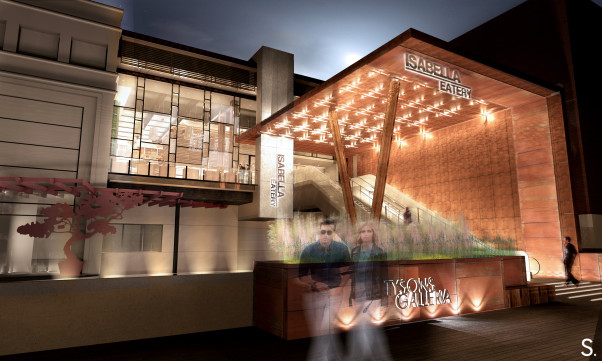 The new food hall will have a dedicated exterior escalator leading to it. (Rendering: Streetsense)

The new space is being designed by Streetsense and will include a top-to-bottom renovation of the old food court and third floor. Each concept will have its own look. Exterior changes include an escalator that leads guests into an atrium where Non-Fiction Coffee will be. One 10,000-square foot kitchen led by an as-of-yet-to-be-named executive chef will serve all the Isabella Eatery concepts.

The atrium-like will have a green wall and trees with a Washington-area map painted by a local artist over exposed brick. Natural wood and complementary geometric patterns inspired by classic D.C. architecture are unifying elements of the design, while each area will have different seating.