Kung Fu Panda 3 continued to lead the box office with $21.24 million last weekend (Feb. 5-7). The 3D computer animated sequel from 20th Century Fox and DreamWorks Animation was down 49 percent from its previous weekend’s debut. Without adjusting for inflation, Kung Fu Panda 3 had the ninth largest Super Bowl weekend performance of all-time. The movie has grossed $69.29 million in 10 days. With no new family films entering theaters next weekend, Kung Fu Panda 3 is likely to hold up very well over the Presidents Day holiday. 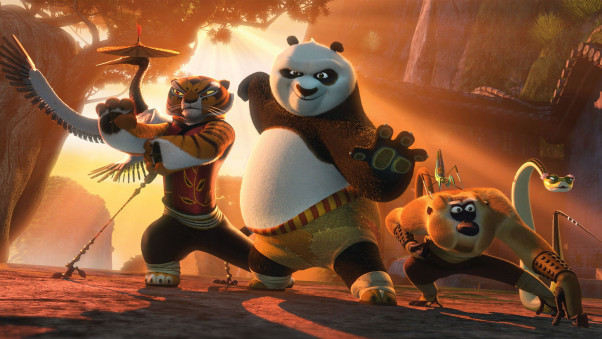 Kung Fun Panda 3 was number 1 at the box office for the second weekend in a row.
(Photo: DreamWorks Animation)

Universal Pictures’ Hail, Caesar! debuted in second place with $11.36 million. The Coen Brothers directed film featuring Josh Brolin and George Clooney opened in line with expectations, which were kept in check a bit by the film’s relatively modest number of screens and its Super Bowl weekend launch. Compared Coen Brothers and Clooney collaborations, Hail, Caesar! debuted 41 percent below the $19.13 million opening of 2008’s Burn After Reading and more in line with the $12.53 million start of 2003’s Intolerable Cruelty. Normally the movie would be a prime candidate for strong holding power after opening against the Super Bowl, but that may not be the case given its low ratings by critics and audiences.

Disney Entertainment’s Star Wars: The Force Awakens finished in third with $6.97 million. The seventh chapter of the Star Wars franchise has surpassed the $900 million domestic mark, making it the first film ever to do so without taking inflation into account. The 52-day total for The Force Awakens stands at $906.04 million. When adjusting for inflation, it ranks as the ninth highest grossing film on the all-time adjusted domestic list. The Force Awakens was down 37 percent from the previous weekend, which represented the strongest hold among wide releases. The movie also passed the $2 billion global mark last weekend, making it the third film ever to do so joining 2009’s Avatar and 1997’s Titanic.

Twentieth Century Fox’s The Revenant claimed fourth place with $6.94 million. The Alejandro González Iñárritu directed western starring Leonardo DiCaprio fell 46 percent from the previous weekend and trailed The Force Awakens by a slim $33,521 for the weekend. The Revenant is on the verge of crossing the $150 million mark with $149.54 million after 31 days of wide release and an additional two weeks of limited release.

Pride and Prejudice and Zombies followed in sixth place with a more disappointing debut of $5.32 million. The horror romance hybrid from Sony Pictures and Screen Gems had been widely expected to get off to a stronger start thanks in part to the fanbase of the 2009 Seth Grahame-Smith novel the film was adapted from. But audiences clearly weren’t interested, as Pride and Prejudice and Zombies opened an underwhelming 67 percent below the $16.31 million start of 2012’s Abraham Lincoln: Vampire Hunter, which was also adapted from a Seth Grahame-Smith novel.