Who’s at Risk for the Zika Virus?

If you hadn’t heard of the Zika virus, chances are that has changed with recent reports of outbreaks of the mosquito-borne illness in South and Central America and the Caribbean and possible cases in the United States – including three people in the DMV, one a pregnant woman. 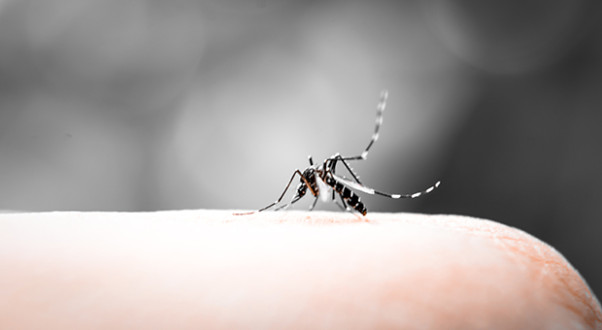 Three cases of the Zika virus have been reported in D.C. — one in 2015 and two this year after people visited infected countries. (Photo: Thinkstock)

According to the D.C. Department of Health, one of the individuals contracted the illness in 2015 while traveling in South America. The other two cases occurred in 2016, with the pregnant woman picking up the virus in South America and a man contracting it in Central America. Another case was confirmed in Virginia, according to the Centers for Disease Control and Prevention. No cases have been found in Maryland yet.

The Zika virus has been found in 23 countries, prompting the World Health Organization to declare a global health emergency. On Monday, President Obama asked Congress for $1.8 billion in emergency funding to combat the virus through mosquito control programs, vaccine research, education and improving health care for low-income pregnant women. The request comes as the CDC announced that its emergency operations center has been put on a “Level 1” status — its highest level of activation — because of the Zika outbreak. The CDC has only put its operations center at Level 1 three times in the past: during the Ebola outbreak in 2014; during the H1N1 pandemic in in 2009; and after Hurricane Katrina in 2005.

“It’s one of those exotic viruses you never think you’d hear about,” said Wallace Greene, director of the Diagnostic Virology Laboratory at Penn State Hershey Medical Center. “It’s not exactly a big threat” Only one in five of those who become infected ever develop symptoms, which can include headache, rash, light fever, joint pain and conjunctivitis, or red eye. Many times, people don’t even realize they are infected.

The problem is that the virus has been linked to microcephaly, a condition that prevents the brain of a fetus from growing to full size and can produce damaging calcium deposits in the brain.

Greene said research is ongoing to learn more about the lifecycle of the Aedes species of mosquito that spreads the disease and whether or not the virus could be of concern for immunosuppressed patients.

Dr. George McSherry, chief of Pediatric Infectious Disease at Penn State Hershey Children’s Hospital, said there isn’t much reason to worry that an outbreak would come to the Mid-Atlantic region because the Aedes mosquito doesn’t like the climate here. “It needs a place where it is warm all the time,” he said.

Even though those traveling to areas with Zika outbreaks could become infected, McSherry said the principal concern is for pregnant women: “If you’re going on vacation while pregnant or if you are planning to become pregnant while you are there, take all the precautions about insect repellent.”

However, the CDC warned last week that in addition to mosquito transmission in affected areas, patients can contract the virus through sex. One patient was infected in Dallas by having sex with someone who had traveled in Venezuela, the CDC said. 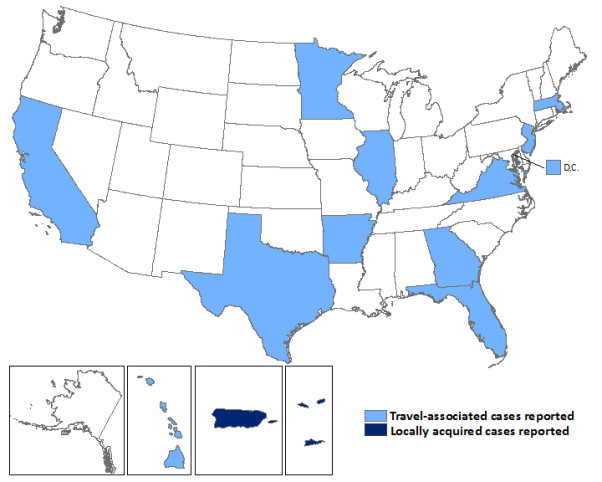 U.S. states and territories where the Zika cases have been confirmed. All were contracted outside the U.S. (Graphic: Centers for Disease Control and Prevention)

The Aedes mosquito feeds mainly on humans and feeds both during the day and at night, so it’s best to stay in accommodations with screens on the windows and doors, and to wear long-sleeved shirts and pants when on outdoor excursions. Those who return home infected with the virus likely won’t even know it unless they develop mild symptoms.

Zika belongs to the same family of viruses as yellow fever, for which a vaccine exists, and dengue, chikungunya and West Nile, the last of which has already been found in the area during the summer months.

“I’d worry about those other viruses before I worry about this one,” Greene said. “When you get dengue or chikungunya, you’re really hurting.”

Any pregnant woman who has traveled internationally and has symptoms of the illness can have blood drawn by their health-care provider and have the sample sent to the CDC for testing for free.

To read the latest developments with the virus, including travel advisories, visit www.cdc.gov/zika.