Lena’s Wood-Fired Pizza & Tap, 401 E. Braddock Road, Alexandria, opened in late October less than a block from the Braddock Road Metro station, a welcome addition to the area with only Dos Amigos and a 7-Eleven nearby. 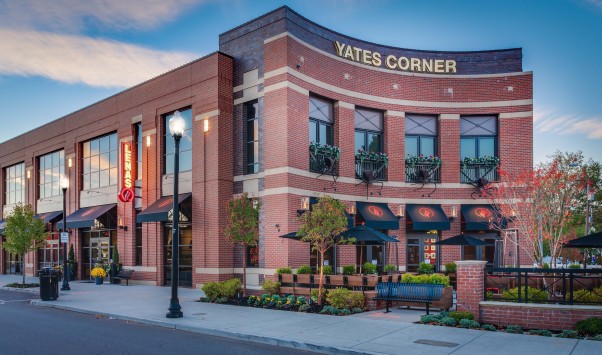 The restaurant is owned by Jason Yates and operated by Alexandria Restaurant Partners, who also own or operate Virtue Feed & Grain, Majestic Café and the forthcoming Palette 22 in Shirlington.

Corporate executive chef Graham Duncan is behind the menu that includes appetizers, salads, paninis, pasta and desserts in addition to the Neapolitan pizza in its name. But I must say those pizzas – available in 10-inch and 14-inch pies and well as 10-inch gluten-free pies made with chickpea flour– were some of the best I’ve had in a while. Lena’s makes all of its dough in-house every day using Caputo Blue 00 flour from Italy and pure spring water. The dough is topped with San Marzano tomato sauce and mozzarella pulled in house daily. In fact, the pizza and dough room, which has its own heating and cooling system as well as a sound system so the employees can plug in their iPhones, is at the front of the restaurant and enclosed in glass so passersby can watch. You can taste the freshness from the first bite. The pizza is baked only about 2.5 minutes in the 900-degree wood burning over from Marra Forni in Beltsville.

My friend and I ordered the sausage and peppers pizza ($12/$16) with mild Italian sausage, caramelized onions, roasted red peppers and smoked provolone and the Korean BBQ ($14/$18) with BBQ short ribs, gochujang, scallions, mozzarella and pickled vegetables. I really liked the dough that, while thin, was just a bit thicker than most places in the DMV serve. I prefer my crust to hold up under the toppings and not become a floppy mess than you have to fold in half or eat with a fork. 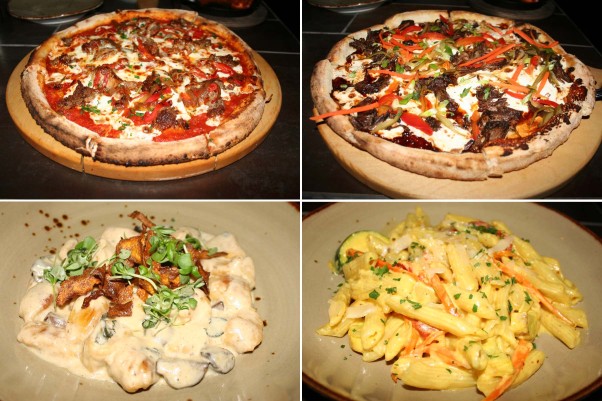 I enjoyed the sausage and pepper pizza a lot. The sausage was mild enough that everyone can enjoy it, although I wouldn’t have minded a bit more heat. My friend, who is Korean, like the Korean BBQ pizza, but declared the meat wasn’t Korean BBQ and that he couldn’t taste the gochujang – a spicy, red chile paste. While Korean BBQ is usually cut up chunks of marinated meat cooked on a grill, the short rib on the pizza was more like dry pulled pork. A manger told us the meat was marinated in the gochujang before cooking, but had to be toned down for most diners’ palates. Still, I thought it was very good and had an Asian flavor, as long as you don’t literally expect authentic Korean BBQ and the spicy gochujang sauce flavors.

We also ordered pasta, which is house-made daily with durum semolina wheat flour. I ordered the penne alla arlecchino ($13), house-made penne and fresh local vegetables in a saffron cream sauce. My friend ordered the butternut squash ricotta gnocchi ($13) with wild mushroom-red wine ragu, brown butter sage cream sauce and parmesan. These were the best pastas I’ve had in the DMV. You could tell the pastas were fresh and not dry pasta from a box. They were light and cooked to perfection. And the sauces didn’t overpower the pastas. 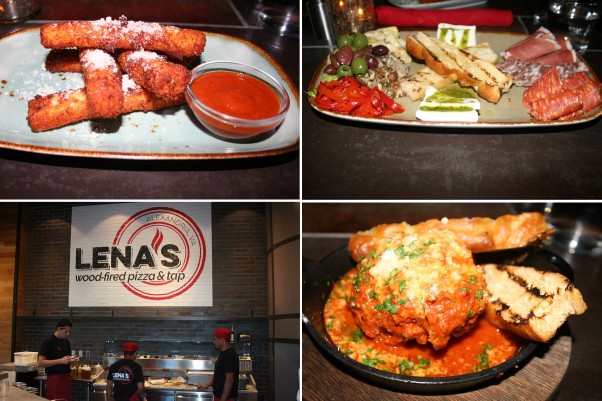 Starters include the polenta fries (clockwise from top left), charcuterie board and a giant meatball. (Photos: Mark Heckathorn/DC on Heels)

We started our meal with the polenta fries ($6), which are fried parmesan-polenta plans served with a roasted garlic-tomato dipping sauce and Lena’s charcuterie board ($16), which includes prosciutto di parma, sopressata salami, marinated olives, wood-roasted mushrooms, roasted red peppers, marinated artichokes, fresh mozzarella and grilled focaccia. Duncan also sent out one of Lena’s giant meatballs ($12), a 10-ounce house-made meatball stuffed with fresh mozzarella, marinara sauce and grilled focaccia. All were good. The meatball, which was the size of a baseball, was just your average meatball only bigger. It was good, but not wow worthy. The charcuterie was delicious, except for the sopressata, which had an odd taste that neither of us liked, so we didn’t finish it. My favorite was the polenta fries, which were similar to mozzarella sticks but with polenta instead.

Finally, with most of the pizza boxed up to go, it was time for dessert (all $6). I had spotted a Nutella pizza on the menu when we arrived and knew that was what I wanted. My guest went traditional with tiramisu. The Nutella pizza was dough covered in Nutella with dark and which chocolate chips and chopped hazelnuts. When it arrived, however, I was very let down. The crust was thinner than the regular pizzas and burnt. Now, I know it is normal to get charred areas on the crust from the super hot oven, and on the regular pizza that just adds a smoky taste to the pizza. But on the super sweet dessert pizza, it overpowered the taste of the other ingredients. Needless to say, after we both tried one slice, the other four slices were added to the pizza being taken home. The tiramisu with house-made lady fingers, espresso, marsala, mascarpone and cocoa was fine, but again not stellar. 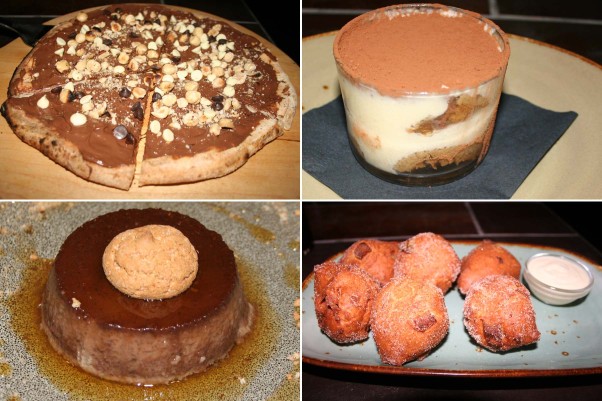 Our server, seeing my disappointment in the Nutella pizza, insisted on bring an order of six house-made apple donuts dusted in cinnamon sugar, which was his original dessert recommendation. And he was right. This was definitely the star of Lena’s dessert menu with a piece of apple in each warm, fluffy donut. He had also recommend the bunet, a chocolate terrine with amaretti cookes. I guess I’ll have to order that next time I visit Lena’s, and there definitely will be a next time.