Halloween Activities Arrive in the DMV

Halloween may be next weekend, but there are many Halloween events going on this weekend including haunted houses, cemetery tours, Boo at the Zoo, a zombie walk and pumpkin carving contests. There are also a few fall festivals going on and the Washington International Horse Show is back at the Verizon Center. 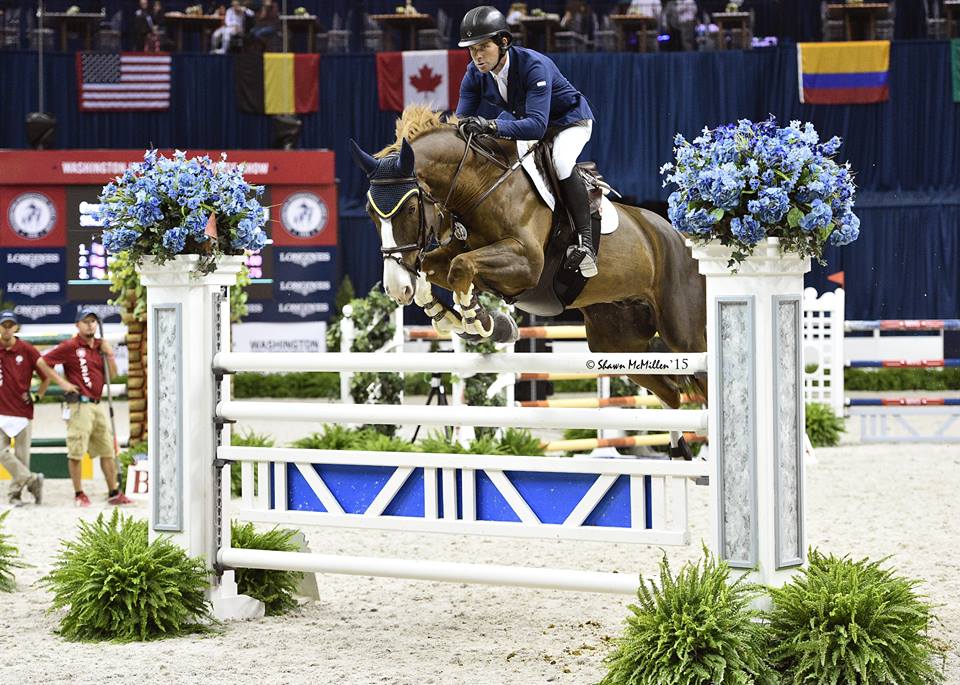 The Washington International Horse Show continues this weekend with junior and amateur events during the day and the higher-profile events hitting the ring during the evening. Of note: tonight night’s $25,000 International Jumper Puissance, which is the equine equivalent of the high jump. Saturday from 10 a.m.-2 p.m. is Kids’ Day, a free, fun, family-friendly event. Children participate in more than a dozen hands-on educational and fun activities, including pony rides, the Animal Planet Horseless Horse Show, the Horse Stars Hall of Fame interactive exhibit, horseshoe painting, face painting, pony brushing lessons, plus giveaways. There’s even a pony kissing booth with Mosley, the mini pony! Outdoor activities will be held in front of the Hotel Monaco at 700 F St. NW (the street will be closed for the event) and face painting and other events will be held on the Verizon Center concourse. 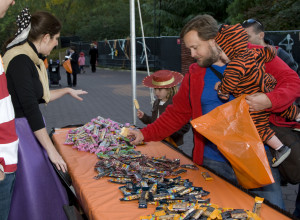 Children get candy from one of 40 stations during Boo at the Zoo. (Photo: National Zoo)

You can expect treats from more than 40 stations (with a heavy emphasis on Mars candy, which sponsors the event) and tricks from a handful of the animals at Boo at the Zoo, the National Zoo’s annual family-friendly not-so-spooky event. There will also be a stage with magicians, jugglers and, new this year, a DJ spinning spooky tracks. There’ also a hay bale maze, scarecrow field, animal demonstrations and keeper chats. 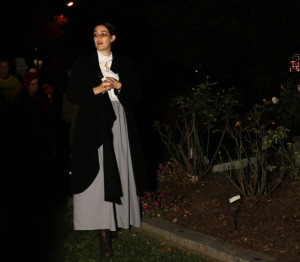 If you’re going to creep yourself out before Halloween, there’s nowhere better than a cemetery. Congressional Cemetery’s Soul Strolls feature costumed actors telling the stories of some of the 65,000 people buried on the banks of the Anacostia. Each tour takes about an hour; beer, wine and cider are available before and after. The cemetery suggests bringing your own flashlight. 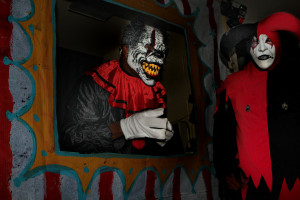 Looking for some spine tingling fun this weekend? Head out to the Bradley Farm Haunted House. The all-volunteer, community event raised funds to help Herndon-Reston FISH provide emergency help to folks in the community. This year’s theme is “The Haunted Coal Mine.” Journey into the damp, darkness of the Bradley Coal Mine with only the light of your lantern to guide you! There’s a non-scary version from 1-5 p.m. on Saturday for children that includes trick-or-treating inside the haunted house and face painting for children 10 and younger. After your walk through the haunted house, there are food vendors, caramel apples, hot cider, musical acts, dancers and magicians including illusionist Mario Orsini and The Franklin Project. 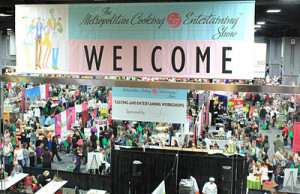 Oct. 24 from 10 a.m.-6 p.m. and Oct. 25 from 10 a.m.-5 p.m. at the Walter E. Washington Convention Center, 801 Mount Vernon Place NW. Admission is $18 per day for adults and $10 for children ages 4-12. Beer garden tickets are $20 and include a commemorative glass and tasting of beer, wines and spirits. Tickets to celebrity meet and greets and book signings are extra. 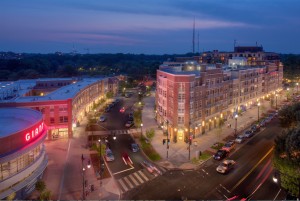 Cathedral Commons, the new mixed-use development located on Wisconsin Avenue NW, will host the first annual Cathedral Heights Fall Festival & Craft Beer Showcase. The community event includes live entertaining including a class with specialty fitness center PureBarre, dance demonstrations from The Washington Ballet, music performances from local community groups and a performance from The Remainders from 4-6 p.m. Free children’s activities include a pumpkin patch, petting zoo, inflatable slide and fall crafts. Food will be provided by Barcelona Restaurant & Wine Bar, Raku, Cactus Cantina, Deluxe Café, Grilled Oyster Co. and Giant Foods.Several restaurants will provide samples while others will offer food for purchase. There will also be fall craft beer tastings. Get a Fall Festival beer tasting glass and samples from Jailbreak Brewery, Capital Eagle and more. Proceeds from the tasting will be donated to The Washington Ballet, which will open a studio at Cathedral Commons this fall. 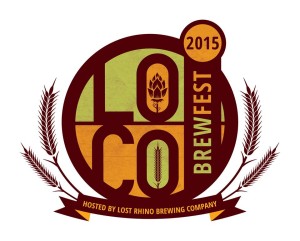 Oct. 24 from 1-6 p.m. at Lost Rhino Brewing Co., 21730 Red Rum Dr., Ashburn. Admission is $20 and include five drink and a souvenir tasting glass. Additional tokens are $2 each. Non-drinkers and designated drivers are $10, which includes unlimited root beer. 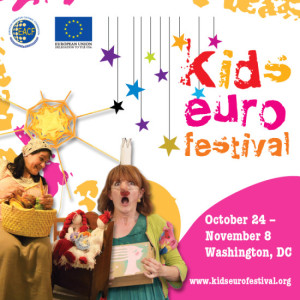 The Kid Euro Festival, which starts this weekend, gives parents an opportunity to give their kids a taste of life across the pond without getting a passport or converting dollars to euros. The 28 European Union countries present more than 150 free activities including music, dance, storytelling, film, arts and crafts, plays and more over two weeks.

Through Nov. 8 at various times and locations acros the DMV. All events are FREE, although some require pre=registration. 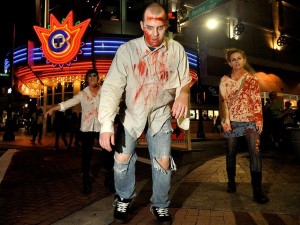 Zombies will take over the streets of Silver Spring on Saturday. (Photo: Visit Montgomery)

Get an early start on Halloween by dressing up in your gory, undead best and joining the annual Silver Spring Zombie Walk. The fun starts with costume contests and an outdoor dance party, with the walk starting outside Jackie’s at 9 p.m. and staggering north on Georgia Avenue. The walk ends where AFI Silver’s “Halloween on Screen” series begins: with the 10 p.m. showing of George Romero’s Day of the Dead. The scary movie event also will feature such classics as Frankenstein and Dracula from 1931, as well as Nosferatu: A Symphony of Horror from 1922. (The film festival run through Nov. 7. Tickets are $7-$12 and can be purchased online). 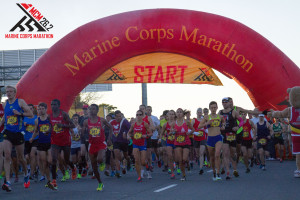 Take part in the Marine Corps Marathon the way running is meant to be enjoyed: by watching others do it. The Marine Corps Marathon, now in its 40th year, starts and ends on Route 110, near Arlington National Cemetery and the Marine Corps War Memorial, while also zipping past some of the District’s most beautiful landmarks. Pick a spot or try to hit a few while following your runner, if you’re an interested party. The 14th Street Bridge entrance and anywhere along the National Mall or around the Tidal Basin are good bets. If going, Metro will open at 5 a.m., but the Arlington Cemetery Station will not open until 8:30 a.m.

Oct. 25 starting at 7:55 a.m. on Route 110 between the Pentagon and the Marine Corps Memorial. It ends at the memorial. The race is FREE to watch. 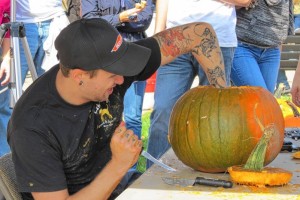 The best pumpkin carver at Eat the Rich’s contest will win a $100 gift certificate. (Photo: Ledger-Transcript)

First time carvers are welcome at Eat the Rich’s second-annual pumpkin carving contest, as are children. The Shaw oyster bar will provide pumpkins, carving tools and even patterns for guests who RSVP. The best work wins a $100 gift certificate to the restaurant. There will be a special on pumpkin punch along with cookies and candy.

Carve a pumpkin while you sip beer or shots at Red Derby in Columbia Heights. (Photo: Ben Starr)

The Red Derby’s annual pumpkin-carving contest is always a good time: Groups take over the tables at the neighborhood bar and carve away while sipping canned beers and shots. The bar provides pumpkins to the first 10 customers, so you may want to BYO, though no pre-carving is allowed. Kid-safe carving tools are available.