Melanoma? There’s an iPhone App for That

A Bethesda man has developed a new iPhone application that enables users to measure and track their moles by comparing their potential trouble spots over time. 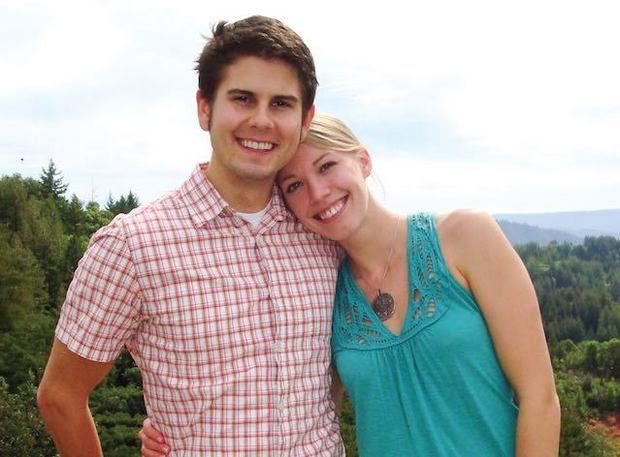 Dan Webster (left), a 31-year-old cancer biologist, invented an app in his spare time to allow his wife, Courtney, to track her moles. Her family has a history of melanoma. Mole Mapper has now become a research project that could lead to medical breakthroughs.
(Family Photo)

Dan E. Webster, a research fellow and cancer biologist at the National Cancer Institute in Bethesda since January 2014 who studies Diffuse Large B Cell Lymphoma, created the Mole Mapper app to help monitor his wife Courtney’s moles between visits to the dermatologist. Webster got his Phd from Stanford University.

Webster, who worried about Courtney developing melanoma, came up with the app in his spare time to track the growth of her moles. He put it on the app store in 2014, and a few hundred people downloaded it.

“My wife has a variety of risk factors for developing melanoma, and we would keep track of her moles by taking pictures” Webster said. “It’s amazing to think this app — something I created in my spare time — now has the capacity to involve so many people in the fight against melanoma. Tracking your moles on your phone now gives you the opportunity to contribute to cancer research.”

Then at a conference earlier this year, he had a conversation about it that led to a collaboration with Oregon Health & Science University and Sage Bionetworks, a large non-profit research institute in Seattle. It is Webster’s first app.

On Oct. 15, OHSU released the updated iPhone app designed to advance melanoma research by giving users the ability to accurately measure and monitor moles, and contribute photos of how their potential trouble spots evolve over time. Mole Mapper is free to download from the iTunes App Store and was developed using Apple’s open source ResearchKit platform. 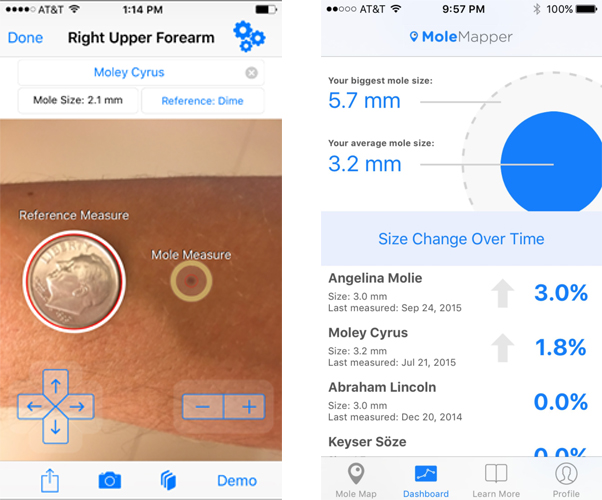 Mole Mapper users photograph their moles (left) with a reference object like a coin every month. The app than tracks any growth in the moles (right), which must be named and mapped on the users body. (Photos: Oregon Health & Science University)

Using the app, individuals can use their iPhone cameras to chronicle subtle changes in spots on their skin and measure mole sizes relative to a common reference object, like a coin over time. Users need to take photos of their moles, name them and then “re-map” them every month. Mole Mapper analyzes the digital photos of moles and other skin conditions and enables participants to track the appearance, size, shape and location of their moles to help catch early signs of melanoma.

“Next time you go to the doctor, you don’t just have a single image, you can see three, six and nine months ago. It’s like six doctors visits in one,” Webster said.

Users can share the photos with their dermatologists or, after signing an electronic consent form, join OHSU’s Melanoma Community Registry to share the photos with researchers and learn more about current research and educational opportunities. With enough photos collected, the hope is to develop a diagnostic algorithm. A significant advantage of crowd-sourcing data for science is that a massive amount can be collected quickly and cheaply.

In addition to providing a more accurate method for tracking, the app gives individuals the opportunity to contribute to melanoma research. By comparing the photos, scientists hope to discover telltale skin changes that lead to melanoma. The anonymous data will help efforts in melanoma research.

Although a rare form of skin cancer, melanoma is the most deadly by far. The earlier it is detected, the more likely it can be treated or even cured. The data collected with Mole Mapper will help research into the types of changes in skin that are the most meaningful in detecting lethal forms of the disease. The data will complement other efforts underway at OHSU to better understand the biological drivers of melanoma so the disease can be more effectively detected and treated.

Dr. Sancy Leachman, chair of the Department of Dermatology in the OHSU’s School of Medicine and director of the OHSU Knight Cancer Institute’s Melanoma Research Program who teamed with Webster on the project, said melanoma hits young and healthy patients, and it is essential to catch it early to ensure survival. The lucky thing about melanoma is that because they’re visible on the skin, many cases are caught before the cancer has spread. However, 30 percent still fall through the cracks.

“We should be catching them,” said Leachman “There’s no reason we can’t catch virtually every one. And this kind of app helps us pay attention. Our hypothesis is that digital images taken by members of the public on cell phones could one day be used to develop diagnostic algorithms for melanoma. To test this theory, we need a large number of images, and that’s where our partnership with Apple and Sage Bionetworks is key.”

“This is just the beginning of the War on Melanoma,” Leachman added. “We now have the unprecedented opportunity to bring in more data than ever to fuel research. This can be another tool to empower patients to take charge of their health monitoring. It also gives health care providers additional data to inform patient recommendations and diagnoses.”

Citizen science is an old tradition, especially in observing wildlife and the environment, and apps that allow hobbyists to contribute to scientific research have exploded. Now, the field is becoming professionalized, with citizen science associations being formed in the U.S., Australia and Europe just in the past couple of years. The White House also recently endorsed the benefits of citizen science in a memorandum, which encouraged agencies to use citizen science and set forth principles and goals to follow.

Mole Mapper can may be downloaded for free from the iTunes App Store here.