Guy Fieri, host of the Food Network’s Diners, Drive-Ins and Dives, was in town yesterday filming an episode of his show. 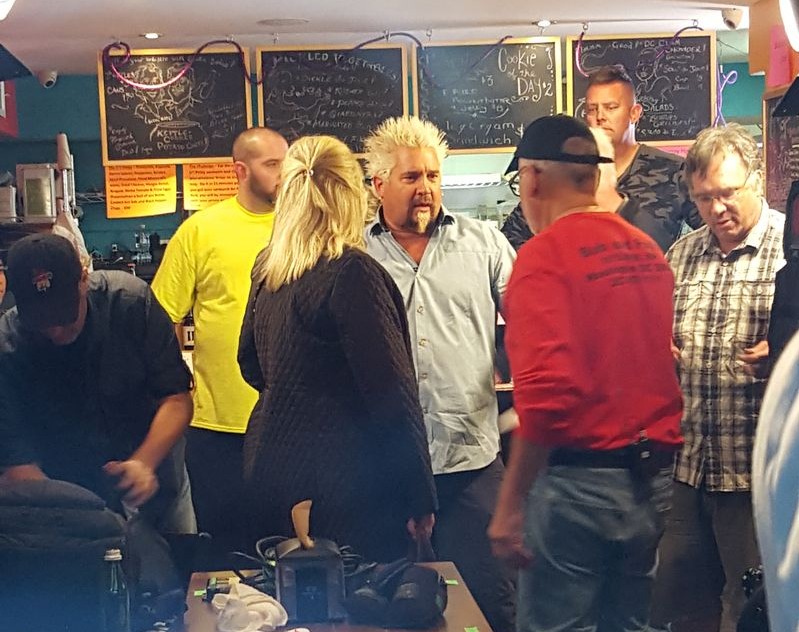 @Eater_DC The car is here at Bub & Pops. Waiting on Guy… pic.twitter.com/IAsjhapFX4

The sandwich shop fits right in with other restaurants featured on the show. Bub and Pop’s specializes in hoagies, homemade chips and pickles. And diners can take the Lil’ Petey challenge: eat the entire Lil’ Petey – prosciutto, capicola, Genoa salami, pepperoni, brisket, aged provolone, fried mozzarella sticks, fried chicken, potato chips, hoagie relish, arugula, Roma tomato and fried eggs — whatever drops on the tray and the potato chips within 15 minutes and the sandwich is free. You also get your photo on the Wall of Fame. Fail, and your pay $50 for the 5 pound sandwich.

Although no one from the restaurant or Food Network would confirm Fieri’s visit to Bub and Pop’s, chef Jose Andres welcomed the bleached blond host to D.C., and the Golden Triangle Business District tweeted that he was on his way to the restaurant at 1:41 p.m.

So excited that @guyfieri is on his way to @bubandpops here in the Golden Triangle! pic.twitter.com/eeCJoqZDtt

Before heading to Bub and Pop’s, Fieri’s signature red convertible was parked outside Toki Underground, 1234 H St. NE. Although it isn’t a diner, drive-in or dive, the restaurant posted on Facebook and Twitter that it was opening late on Friday for lunch. Twitter users also reported seeing him at The Carving Room, 300 Massachusetts Ave. NW, before going to Bub and Pop’s. There is no word on if Fieri was just visiting there or filming at those restaurants.

We are opening later this afternoon for lunch and regular dinner hours! Thank you 🌞

Fieri has featured other D.C. restaurants on his show including Tune Inn, Oohh’s & Aahh’s and Comet Ping Pong. Last night, Fieri visited Andres at Barmini, 855 E St. NW, and tweeted photos of him with the local chef and staff.

Fieri sometimes visits several restaurants in a city for different episodes, so keep your eyes peeled for his red Camero this weekend. Or maybe he’ll be spotted in Baltimore visiting his Guy Fieri’s Baltimore Kitchen + Bar at the Horseshoe Casino downtown.

Dacha Beer Garden, 1600 Seventh St. NW, is for sale and half the staff are being laid off in a battle between owner Dmitri Chkaldin and Ilya Alter and the Advisory Neighborhood Commission over the beer garden’s capacity. 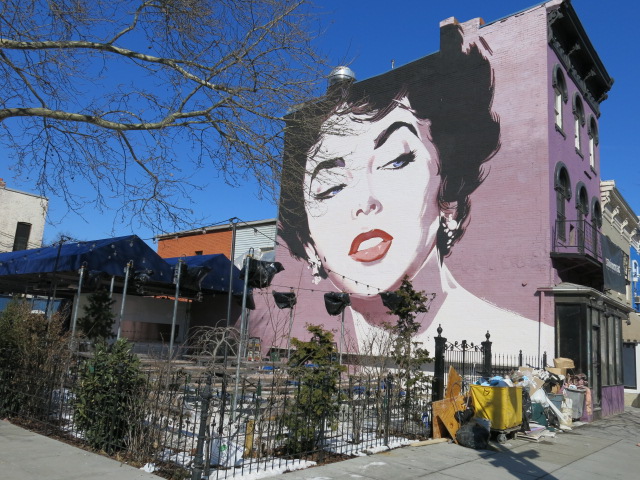 Dacha Beer Garden’s owner laid off 20 employees and are looking to sell in a dispute with neighbors over its city-set capacity. (Photo: Popville)

The bar is permitted to have 126 people. Over the summer, Chekaldin and Alter took over the building next door and asked the Alcoholic Beverage Regulation Administration to increase occupancy to 600 with 250 inside and 350 outside. The ANC protested after an ongoing fight over noise from the beer garden, which has been citied by ABRA many times for having too many people.

The owners say they are being singled out, with ANC members visiting every weekend. But records show Dacha has been cited for crowds exceeding 300. The neighbors complain that the noise inside their houses is much more with 300 bar patrons than they 126 they bargained for. Dacha has tried to abate the noise by bringing in an sound engineer and adding fencing and other soundproofing.

But Chekaldin told the Washington City Paper on Friday that the bar will abide by the 126-person limit, but must lay off 20 of its 46-person staff. He also warned there will be a huge line outside and angry people.

He also said they are in negotiation to sell the business to a big German beer brand that he wouldn’t name. However, he did say it has plan for several beer gardens in the U.S.

Neighbors say that if Dacha has to lay off staff, it is their own fault for hiring people to serve a capacity they weren’t authorized to have.

ABRA has scheduled an evidentiary protest hearing for Nov. 4. In the meantime, Dacha plans to post signs urging customers to tweet the mayor, council and ANC representatives with photos of the line and urging them to increase Dacha’s capacity to 350.

Partners Ryan Seelbach and Eric Lund, who also own The Huxley, are planning to open Takoda, a 120-seat contemporary American restaurant and beer garden at 715 Florida Ave. NW in the former Federal Life Insurance building in early December. Takoda is a Native American name meaning “Friend to Everyone.” 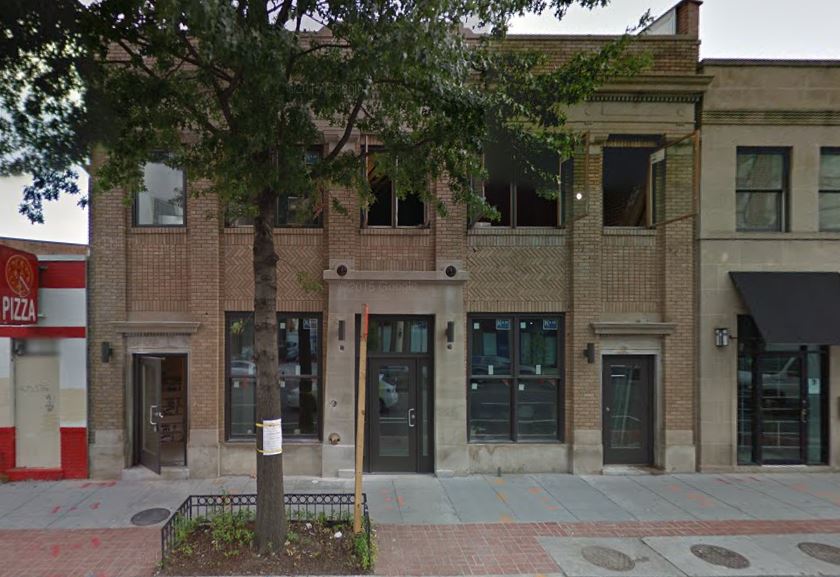 Chef Damian Brown, who earned a culinary degree from the Lincoln Culinary Institute in Columbia, Md., and began his culinary career as a baker at Zola Wine & Kitchen, a private event and test kitchen concept from the owners of the now shuttered Zola restaurant, will lead the kitchen. Brown previously worked at 8407 Kitchen + Bar in Silver Spring, as sous chef/tournant at Vidalia in Washington, as junior sous chef at Occidental Grill & Seafood and lead prep cook at Blue Duck Tavern. Most recently he was chef de cuisine at Stanton & Greene before accepting the job at Takoda.

Diners can expect creative takes on American classics. Dishes will include small plates of rosemary parmesan tots, brisket siders and four types of wings including chef’s specialty PB&J BBQ wings. Other dishes include a grilled romaine Caesar and a cranberry kale salad; chicken and sweet potato waffle; brisket with fresh mozzarella, grilled onions and BBQ aioli served on a house-made crust; shrimp and grits with a Tasso ham and pepper sauce topped with a sunny side up egg; a bacon-infused beef burger with bacon blue cheese, sliced bacon and a sunny side up egg served on a pretzel pun; and pan-seared salmon cakes. House-made desserts include molten chocolate s’mores and fried Oreos. Prices range from $5-$9 for small plates, $5-$8 for salads, $12-$19 for entrées and $4-$8 for desserts.

Takoda’s bar program will offer more than 24 American draft beers including local favorites such as D.C. Brau, perennial favorites such as Bell’s Brewery and a variety of seasonal options priced from $6-$10. There will also be a collection of more than 50 American whiskeys including Bulleit bourbon, Knob Creek bourbon whiskey, Buffalo Trace Distillery, Copper Fox Distillery, Jefferson’s Reserve bourbon and a monthly rare acquisition priced from $7-$35.

Edit Lab at Streetsense is designing the 4,600-square-foot space, which spans two floors and includes a rooftop beer garden. Takoda will feature original brick walls and wood ceiling beams with booths and crushed velvet drapes surrounding a solid oak bar in the main room. The roof deck will be accented with hanging and potted plants around an island bar overlooking Florida Avenue and featuring a canopy and operable windows that allow for year-round eating and drinking.

It looks like Columbia Heights may be getting an &Pizza early next year. 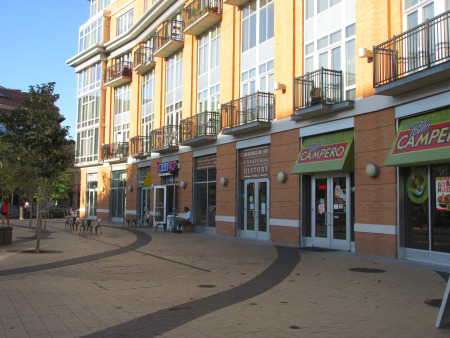 &Pizza will open a restaurant in Columbia Heights in the space that formerly housed the Museum of Unnatural History. (Photo: Park View D.C.)

Representatives of the local pizza chain told community members at the ANC 1A meeting Thursday night that they plan to op where the former Museum of Unnatural History had been at 3333 14th St. NW, according to ANC 1A Commissioner Kent Boese’s blog, Park View, D.C.

The representatives said they hope to open in the first quarter of 2016. The restaurant will have 40-60 seats, Boese wrote, with outdoor seating as well. They also said they would be applying for a liquor license.

Oyamel holds its annual Day of the Dead Festival

Oyamel, 401 Seventh St. NW, will hold its annual Day of the Dead festival Oct. 19-Nov. 1, 2015 in celebration of the Mexican holiday, Día de los Muertos, where the people of Mexico celebrate lost loved ones and honor the living. 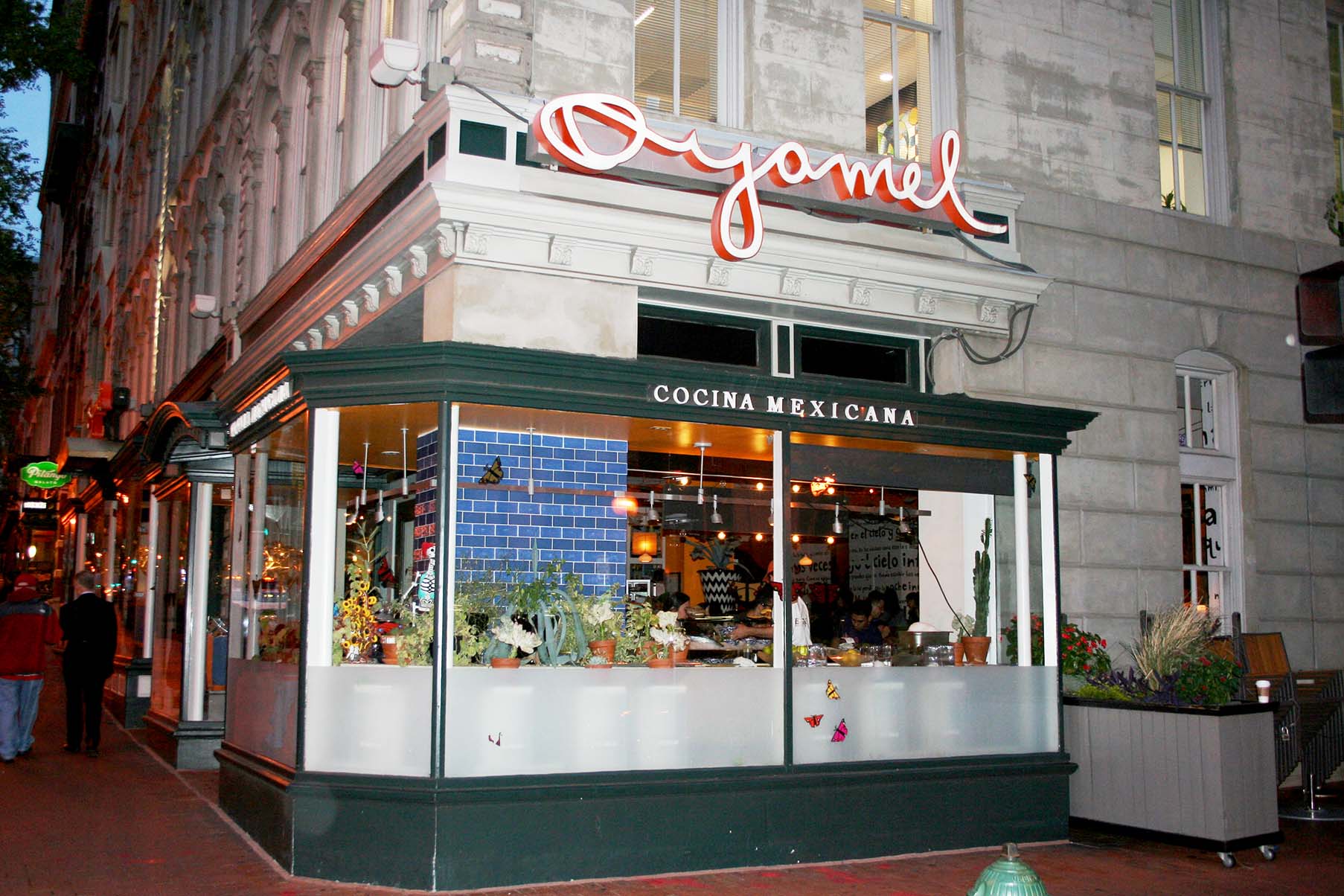 Oyamel will hold its annual Day of the Dead festival from Oct. 19-Nov. 1. (Photo: Mark Heckathorn/DC on Heels)

The festival will begin with a kick-off party from 6-9 p.m. on Monday, Oct. 19, where guests will enjoy small bites, tequila tastings, specialty cocktails, live music and face painting for $49 per person. Tickets can be purchased online. Use promo code dconheels for $5 off.

This year’s festival menu reflects Mexico’s culinary heritage combined with the current urban fare of Mexico City. This year, the festival will feature cocktails inspired by Mexican singer, actor and cultural icon, Pedro Infante. His films will be projected during the kick-off event and guests are encouraged to wear their favorite Infante inspired clothing.

Drink specials include “The Soldier” inspired by the first song Infante ever recorded. The drink features onion-infused honey with Milagro blanco tequila, Aperol and grapefruit juice garnished with lime peel and traditional marigold flower. The other featured drink is “Funeral at Yucatán,” a celebratory farewell cocktail made with Milagro blanco tequila, Ancho Reyes liqueur, espresso, egg white and lemon juice topped with cava and garnished with basil leaf and grated coriander seeds. Both are priced at $12. Food spcials include Cordoniz en Pipian, quail with langoniza over pipian priced at $15, and Conejo en Calabaza Rojo, rabbit saddle with a red purée of fall squash for $14.

The Majestic Café, 911 King St. in Old Town, will partner with Ox-Eye Vineyards from Staunton, Va., to host a special wine dinner on Wednesday, Oct. 21. Priced at $59 per person, the menu will consist of five courses. Each course will be paired with wines from Ox-Eye’s 100-acre vineyard. 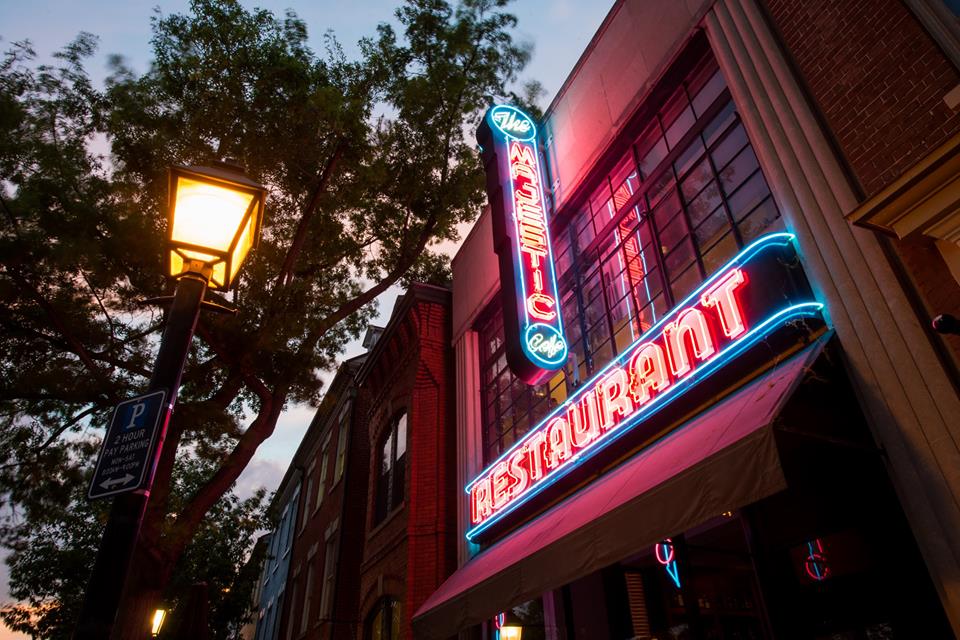 The first course will be farmstead pate made with Fields of Athenry Farm chicken liver and served with drunken cherry compote, stone ground beer mustard, pickled vegetables and grilled baguette paired with Scale House Reserve Riesling 2014. The second course is roasted bone marrow with Virginia whiskey barrel smoke and parsley lemon sea salt served with grilled baguette paired with Lemberger 2012. Next is house-made kabocha ravioli with toasted hazelnut sauce paired with Chardonnay 2014. The main course is Cheerwine braised short ribs with cornbread puree and roasted baby vegetables paird with Cabernet Franc 2012. For dessert, there will be seasonal local cheese and fruit with local honeycomb and nuts paired with Gewürztraminer. 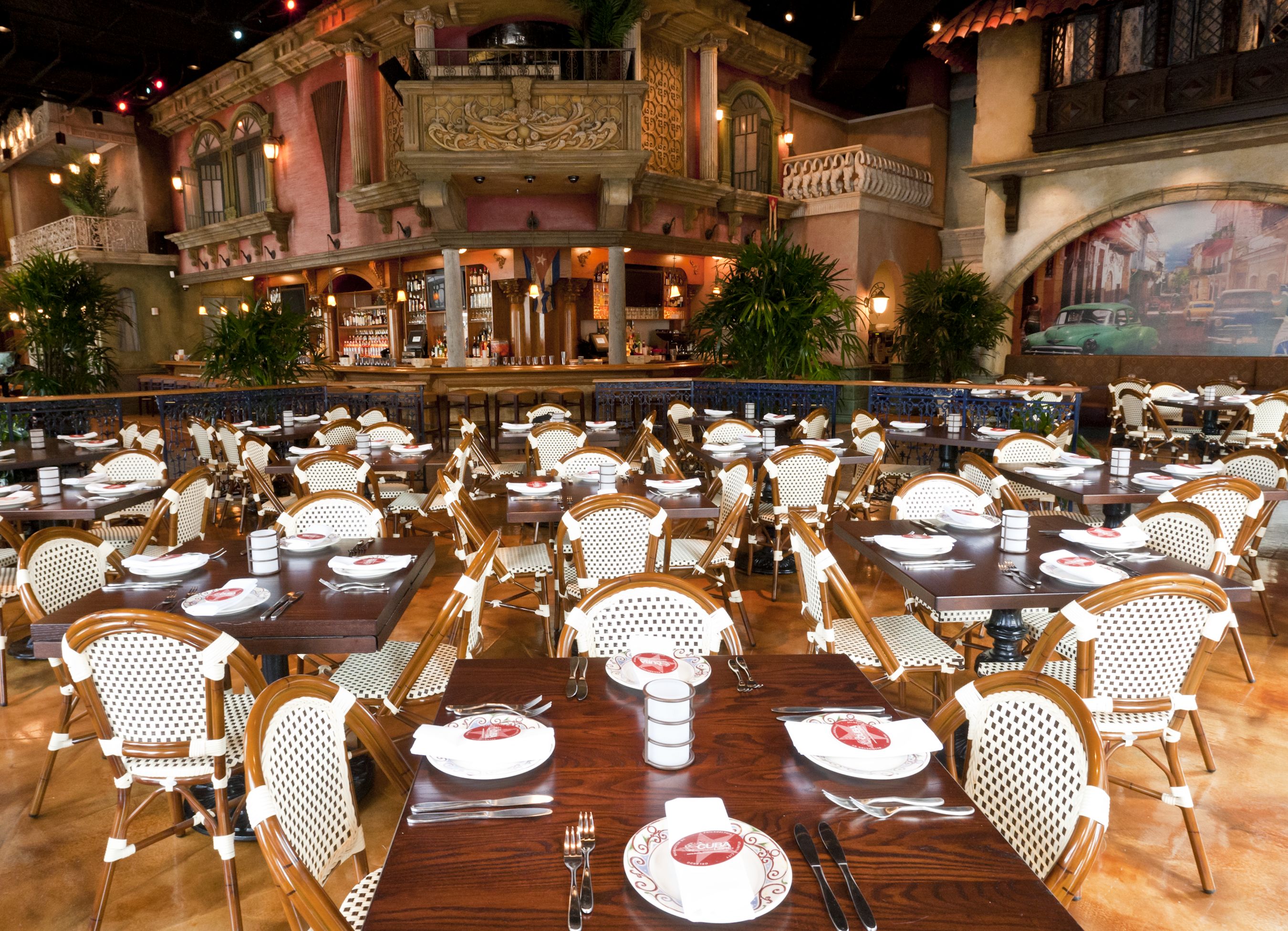 Live entertainment will be provided by Joe Falero and his Cuba Trio Ensemble. There will also be a celebratory champagne toast and door prizes.

Legal Sea Foods introduced new cocktails just in time to toast Halloween and the holiday season on its Raising the Bar menu. The cocktails are priced from $9-$12. 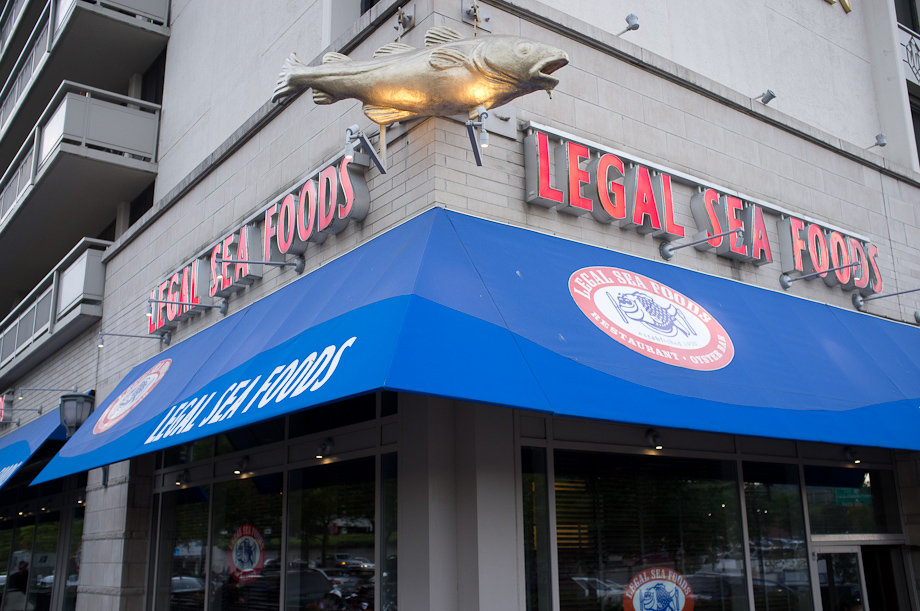 Legal Sea Foods, including this one in Crystal City, has a new Raising the Bar cocktail menu. (Photo: Dave Powell/Shoot Tokyo)