Bulgaria is a Balkan nation with diverse terrain encompassing the Black Sea coastline, rivers including the Danube and a mountainous interior. The country has a long history of grape growing and wine production, dating back to the times of Alexander the Great. Its rich fertile valley was occupied by the Greeks, Romans, Byzantines and Ottomans for a period of more than 2,000 years. One of the reasons so many empires coveted the territory was the quality and quantity of the wines it produced.

A samplings of Bulgarian wines. (Photo: Mark Heckathorn/DC on Heels)

While Bulgaria has been making wine for at least 7,000 years, it’s still not widely known in the U.S., although it is becoming better known for its quality, value and variety. Last week, the Bethesda-based G&B Importers invited sommeliers, wine buyers and the press to sample some Bulgarian wines and learn more about it.

Founded in 2011, G&B is a direct importer and distributor of wines from Bulgaria and other emerging markets. The company contracts with family-owned and operated wineries to produce wines under their proprietary labels as well as to import wine under their partners’ labels.

Bulgaria is finding its identity as a modern wine-producing nation, discovering new terroirs, grape varieties and styles. It produces varietals such as Sauvignon, Merlot, Chardonnay, Riesling and Muscat — French varieties were brought to Bulgaria in the 1960s at the height of communist rule — although the country still produces traditional varieties such as as Kadarka Gamza, Mavrud and Melnik.

Bulgria is divided into five wine producing regions, which produce 22 million liters of wine each year: the Danube Plain in the north and Black Sea region in the east are the mainstay of Bulgarian viticulture, although the Thracian Lowlands in the south, sub-Balkan Rose Valley and Struma Valley in the southwest also generate a respectable quantity of wine. 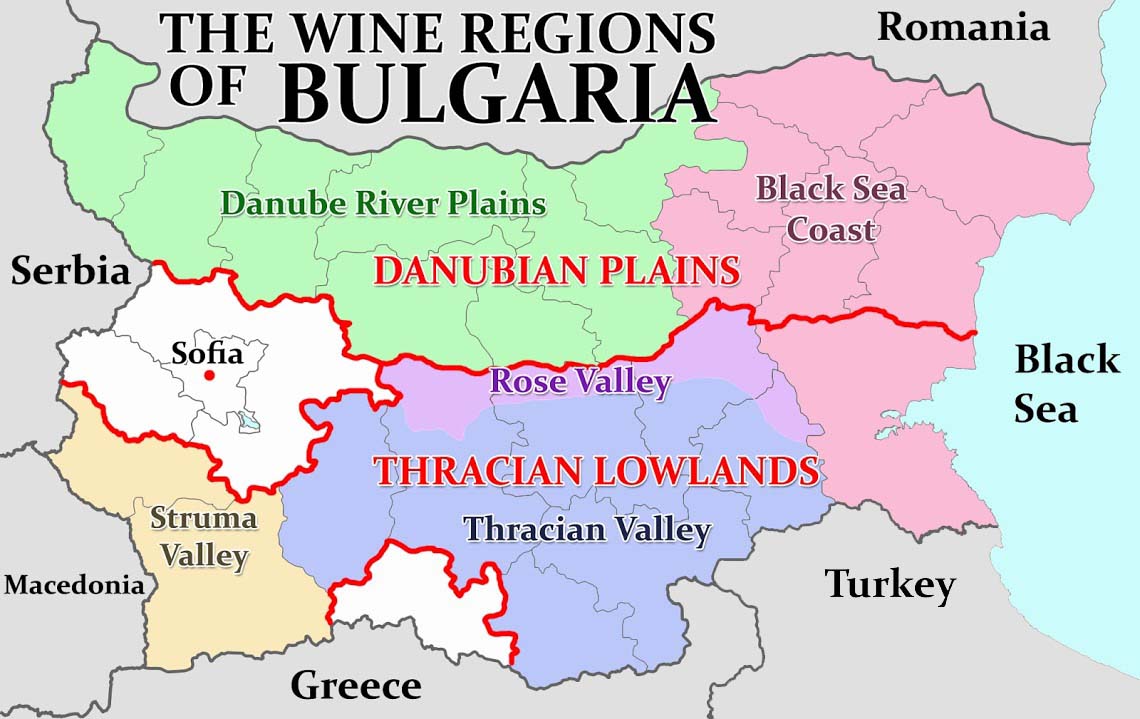 The history of wine-making in Bulgaria began with the ancient Thracians, who use wine not only for drink, but for many of their religious rituals. They traded what was then a dense, sweet wine called Zelus made from wild grapes and sweetened with honey to the Greeks. But under Soviet rule, Russia pushed the country’s winemakers to produce wine in quantity, not quality, according to Jeff Jensen and Mike DeSimone, who are known as the World Wine Guys and are entertaining and wine editors for Wine Enthusiast Magazine. “But they have gone back.”

The major markets for Bulgarian wine are western European countries such as Britain, the Netherlands and Germany. But from 1946 to 1989 as part of the Eastern Bloc, most of Bulgaria’s wine was sent to Russia.

Today high quality wines from Bulgarian wineries can be found all over the world including many liquor stores such as Calvert Woodley, Rodman’s and D’Vines, and restaurants in the DMV including Chef Geoff’s, Ambar, Blacks Bar & Kitchen and Blue Duck Tavern. (Find a more detailed list here.)

“The world is looking at wine in different ways,” said Bulgarian Ambassador Elena Poptodorova. “A happy day has come when good Bulgarian wine can be appreciated so far away from home.”