Skip the Steak, Go for the Fried Rice & Sushi

Kabu Japanese Steakhouse, 14601 Baltimore Ave., Laurel, Md. in the Boulevard Shoppes along Route 1, opened last April in the space that formerly housed Sake Japanese Steakhouse without much change to the décor. Before Sake, which closed a couple years ago, the space had been a Chili’s restaurant.

Upon entering, you see the bar. To the left is table service and the lounge, to the right is the hibachi area. 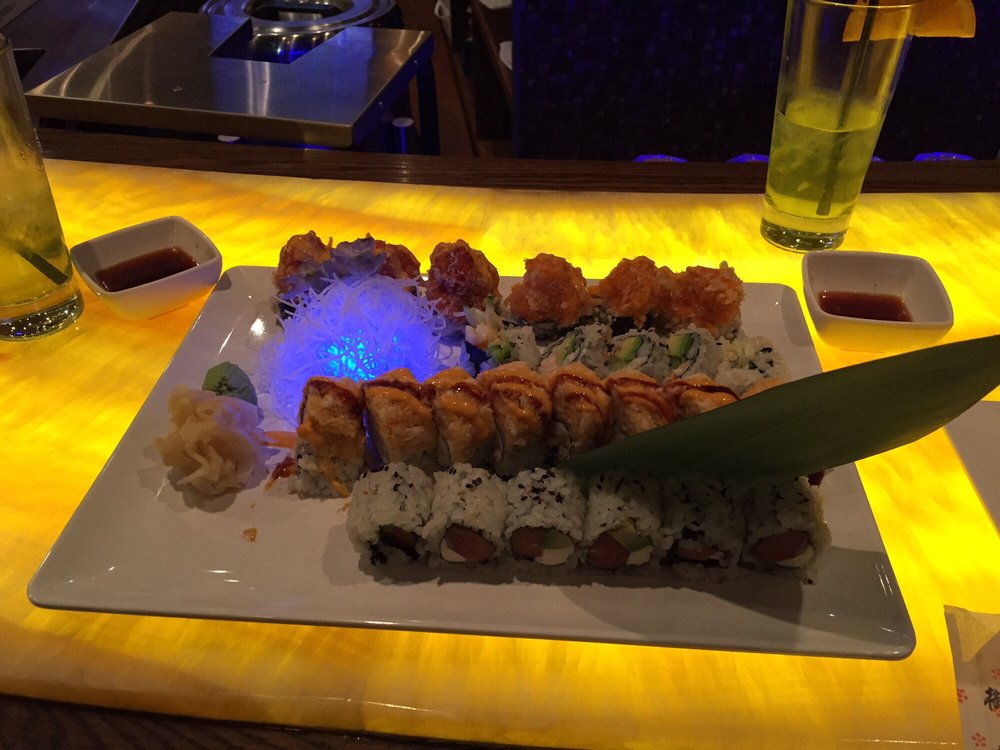 But on a recent visit for a friend’s birthday, we had the hibachi. All dinners come with the miso mushroom soup, a house salad, hibachi noodles, flaming shrimp appetizer, friend rice and hibachi grilled vegetables. The miso soup with a few slices of mushroom is pretty good, but the house salad is just iceberg lettuce with lumpy dressing that tasted like thousand island with ginger added.

Entrees include vegetable (without the shrimp), chicken, New York strip steak, filet mignon, shrimp, scallops, salmon or lobster. Entrees range from $13-$31. You can also combine two smaller servings of the steak, chicken, shrimp or salmon for $20 or scallop or filet mignon for $23. Other combinations include filet and scallops, filet and lobster, shrimp and lobster, the Emperor’s Feast with filet, shrimp and scallops, Seafood Delight with lobster, shrimp and scallop and the Kabu dinner with filet, lobster tail and scallops. Combos range from $24-$32. There’s also a Lovers Dinner for two that include filet, lobster, scallops and chicken for $62. 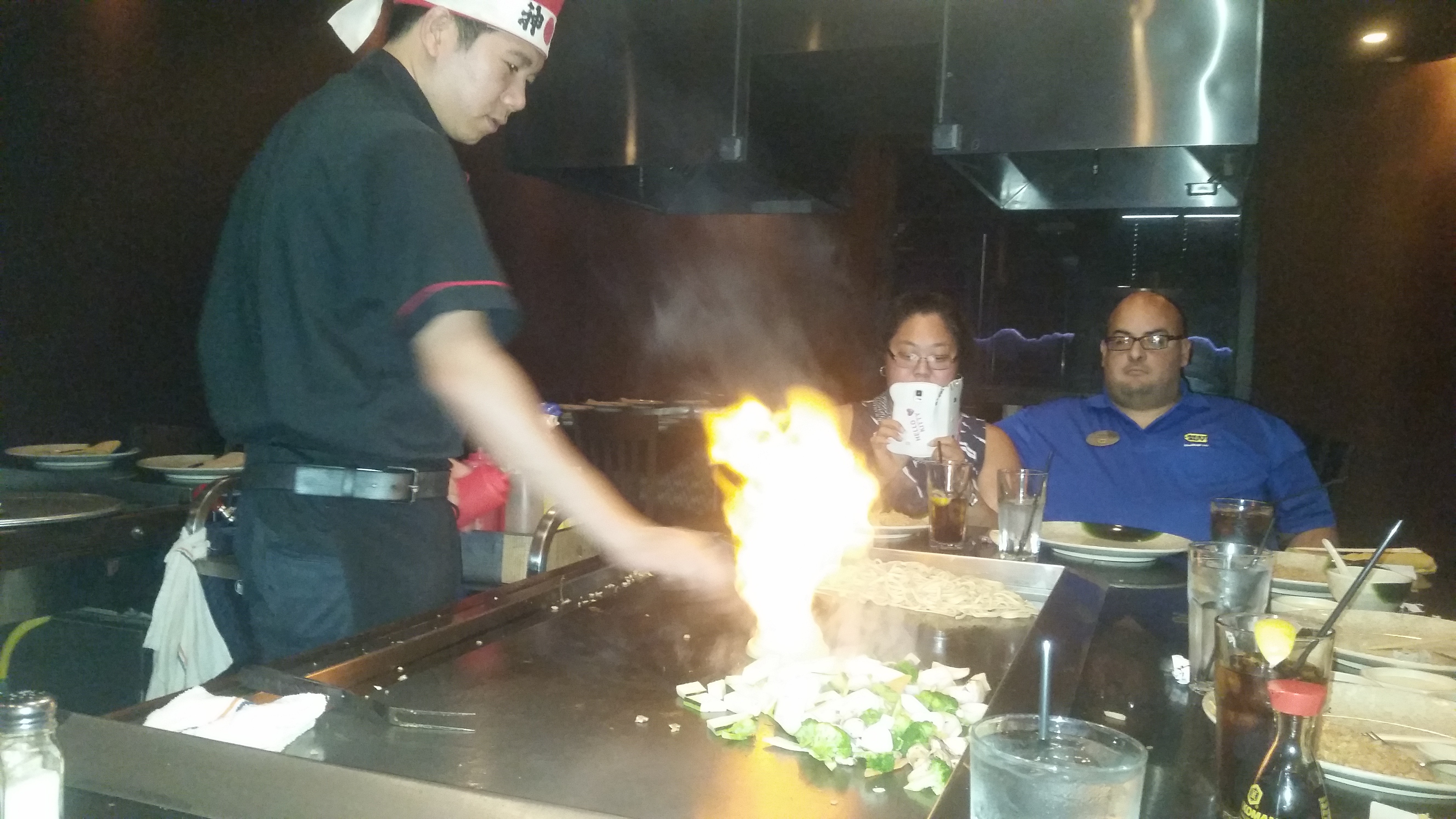 The hibachi chef entertains with an onion volcano. (Photo: Mark Heckathorn/DC on Heels)

Once you’ve finished your soup and salad, the hibachi chef comes out and performs a show while preparing your meals. The chef twirls his utensils, spins eggs, chops vegetables and makes an onion volcano, which he sets on fire with sake. He’ll also offer diners over 21 a squirt of the sake right out of the bottle. The chef will also try to flip a piece of fried vegetable into each diner’s mouth. Our chef wasn’t such a great aim and only made one out of 10 attempts –the others landed on the floor, our laps and in our eyes.

How entertaining the show is depends on the chef. In our case, our chef went through the routine he was taught, but didn’t put much effort into it. The chef at the table across from us, however, was much more lively and entertaining. 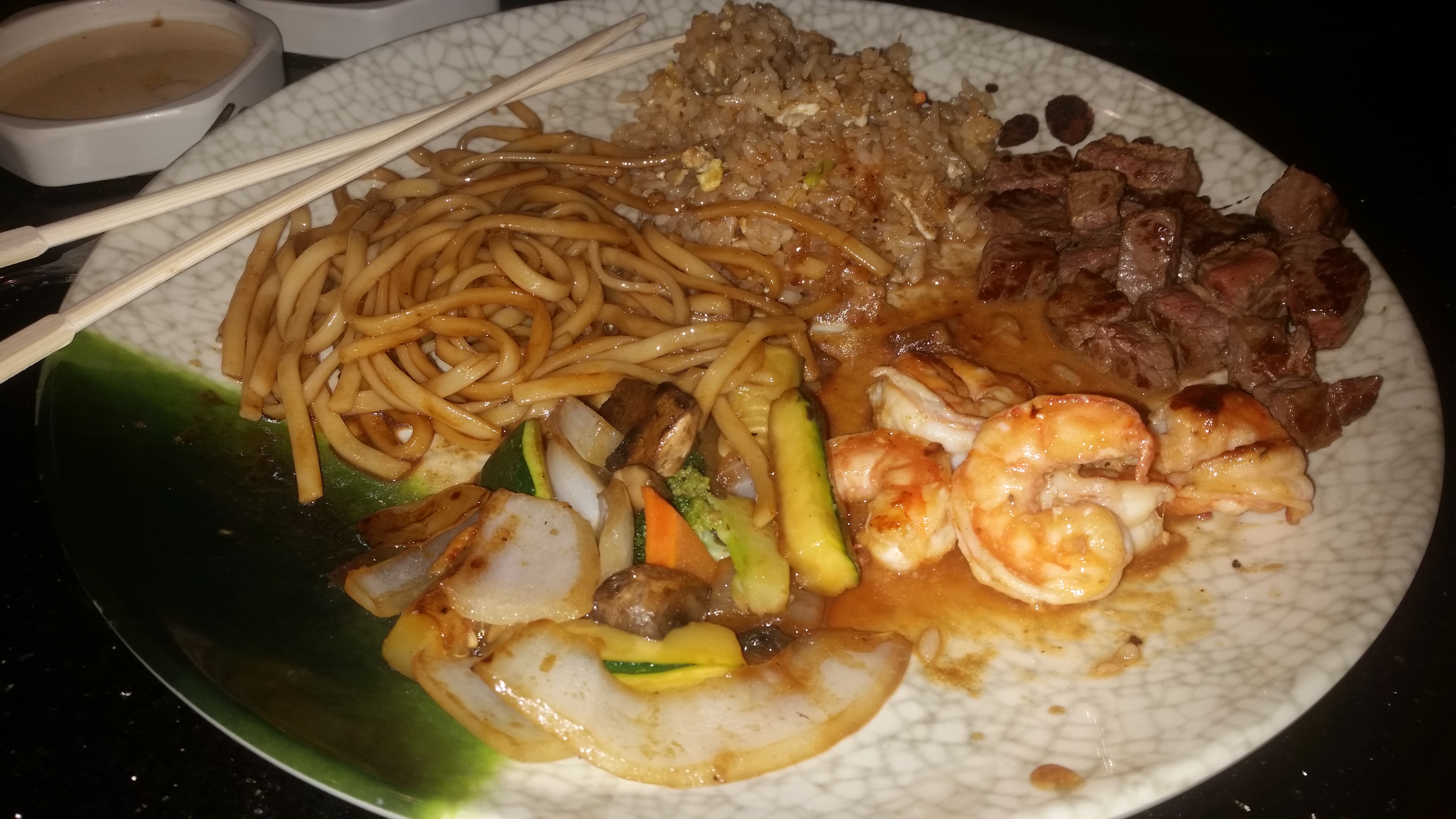 Next comes the shrimp appetizer – two shrimp per person – which is flambeed, followed by the meat or fish, fried rice, fried noodles and grilled vegetables. The shrimp was the best of the proteins we sampled, although none were stellar or memorable. The yum yum sauce made the shrimp even tastier and was good on the chicken as well. The steak, while tender, was bland and tasteless, even when dipped in the brown soy-teriyaki sauce. In fact, none of the proteins we chose were seasoned except for the oil, butter and salt the chef sprinkled on it while cooking on the hibachi.

The side dishes, however, were the star of the meal. The fried rice was the best, and I could have eaten a whole plate of it. It started out at white rice the chef cooked in oil then added fresh eggs cooked on the hibachi, butter and soy sauce. The noodles were also cooked on the hibachi with oil and soy sauce and the fresh vegetables were lightly seasoned and grilled.

During our visit, one person ordered some sushi, which they thought was good, and another opted for the yaki udon, pan fried Japanese noodles with shrimp, crab sticks, fish cake and seasonal vegetables.

If you are in the area, Kabu is a good alternative to the chain eateries that populate Laurel, but I’d stick with the vegetarian hibachi, which has all the good dishes without wasting extra money on just so-so proteins. Use the extra money to buy some sushi, which is priced from $3-$6 during happy hour, or a $5 happy hour drink.