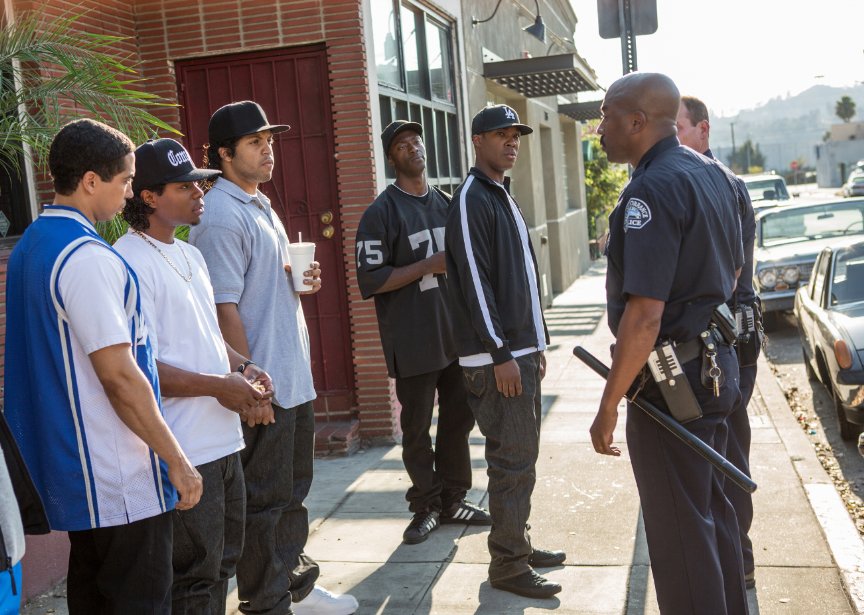 Straight Outta Compton, the N.W. A. biopic, was topped the box office for the third weekend in a row.
(Photo: Jaimie Trueblood/Universal Pictures)

Sony Pictures’ War Room was off to a nice start with a second place debut of $11.35 million. The low-budget Kendrick Brothers produced faith based film from TriStar Pictures and AFFIRM Films exceeded its modest expectations heading into the weekend. Making the film’s performance even more impressive was that the film was only playing in 1,135 locations last weekend. That gave War Room a strong per-location average of $10,001 for the frame. War Room was aided by an effective grass-roots marketing campaign and by the pre-established fanbase for the Kendrick Brothers. Previous Kendrick Brothers films, Fireproof and Courageous both displayed strong holding power during their respective runs. War Room will likely display strong holding power of its own going forward.

The Weinstein Company’s No Escape debuted in fourth with $8.11 million. The action thriller starring Owen Wilson, Pierce Brosnan and Lake Bell opened in line with its modest pre-release expectations. Since its debut on Wednesday, No Escape has grossed $10.17 million in its first five days of release. While No Escape received mixed reviews from critics, the film appears to be going over better with moviegoers. No Escape will hope to hold up well next weekend with the aid of both positive word of mouth and the Labor Day holiday.

Upon receiving a re-expansion last weekend that included a return to IMAX locations, Jurassic World took ninth place with $3.01 million. The 3D blockbuster sequel from Universal expanded into an additional 665 locations last weekend and was up 218 percent over the previous weekend. Without taking into account inflation, Jurassic World remains the third highest grossing film of all-time domestically with a current total gross of $642.98 million.

Meanwhile, Warner Bros.’ We Are Your Friends was off to an anemic start with $1.77 million. That placed the low-budget Zac Efron led drama all the way down in 14th place. We Are Your Friends opened significantly below expectations and potential for the film was ultimately limited by the film’s low-profile advertising push. We Are Your Friends debuted 80 percent below the $8.74 million start of last year’s That Awkward Moment. We Are Your Friends certainly marks a poor first post-Neighbors performance for Efron, but the actor is likely to rebound in a big way next year with Dirty Grandpa , Neighbors 2 and Mike & Dave Need Wedding Dates all scheduled to open in 2016.