Universal Pictures’ Straight Outta Compton was strong straight out of the gate last weekend (Aug. 14-16) with a first place debut of $60.20 million. The modestly budgeted F. Gary Gray directed N.W.A biopic outpaced lofty expectations, which rose rapidly due in part to high levels of online buzz surrounding the film and strong early reviews. Without adjusting for inflation, Straight Outta Compton registered the fifth largest opening weekend performance ever in August. Making the film’s debut even more impressive was that it didn’t have higher priced 3D or IMAX admissions to boost its gross. The film also opened in a relatively modest 2,757 locations. While Straight Outta Compton was somewhat front-loaded, it has a good chance of stabilizing going forward thanks in part to strong reviews, early word of mouth and the relatively soft new competition the film faces as summer winds down. The movie is another very impressive performer for Universal this year, joining a list of box office successes that includes Jurassic World, Furious 7, Minions, Pitch Perfect 2, Fifty Shades of Grey and Trainwreck. 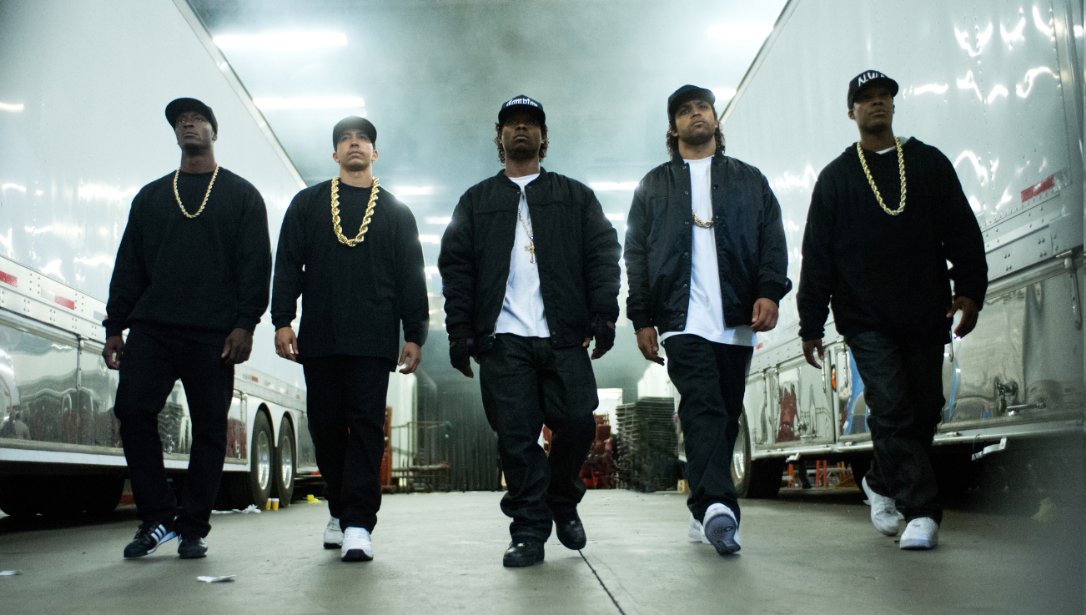 Straight Outta Compton, which opened at the top of the weekend box office, is the story of N.W.A., a gangsta rap group.
(Photo: Universal Pictures)

Warner Bros. Studios’ The Man from U.N.C.L.E. was off to a soft start with a third place take of $13.42 million. The Guy Ritchie directed spy comedy starring Henry Cavill and Armie Hammer opened below expectations and didn’t perform well with its price tag in mind. Opening against Straight Outta Compton and so soon after Mission: Impossible – Rogue Nation clearly took a toll on the movie. While it wasn’t expected to do so, The Man from U.N.C.L.E. was unable to duplicate the success of Kingsman: The Secret Service earlier this year, opening 63 percent below the $36.21 million debut of Kingsman.

The bad news continued for Fantastic Four as 20th Century Fox’s attempt to relaunch the superhero franchise was down two spots to place fourth with $8.17 million. Fantastic Four was down a massive 68 percent from its already disappointing start. The sharp second weekend decline for Fantastic Four didn’t come as a surprise given the film’s poor word of mouth, the competition it faced from Straight Outta Compton and the Fantastic Four franchise being naturally front-loaded to begin with. Fantastic Four has managed just $42.13 million in 10 days. The film is currently running 57 percent behind the $97.46 million 10-day gross of 2007’s Fantastic Four: Rise of the Silver Surfer.

STX Entertainment’s The Gift held up far better with a fifth place take of $6.51 million. The Joel Edgerton directed thriller starring Jason Bateman, Rebecca Hall and Edgerton was down two spots and a 45 percent from the previous weekend. The Gift continues to exceed expectations with a 10-day take of $23.59 million and is performing nicely with its reported production budget of just $5 million in mind. The film is running nearly on par with the $23.80 million 10-day start of last year’s The Giver, which fell 48 percent in its second weekend to gross $6.43 million.