Trump Old Post Office, Donald Trump’s luxury hotel being built inside the Old Post Office Building at 1100 Pennsylvania Ave. NW, filed a breach of contract lawsuit Friday against ThinkFoodGroup and Topo Atrio, presumably the restaurant group’s planned flagship restaurant in the forthcoming hotel, after chef José Andrés backed out of the deal July 8. The suit filed in the U.S. District Court for the District of Columbia seeks $10 million in lost rent and other damages. 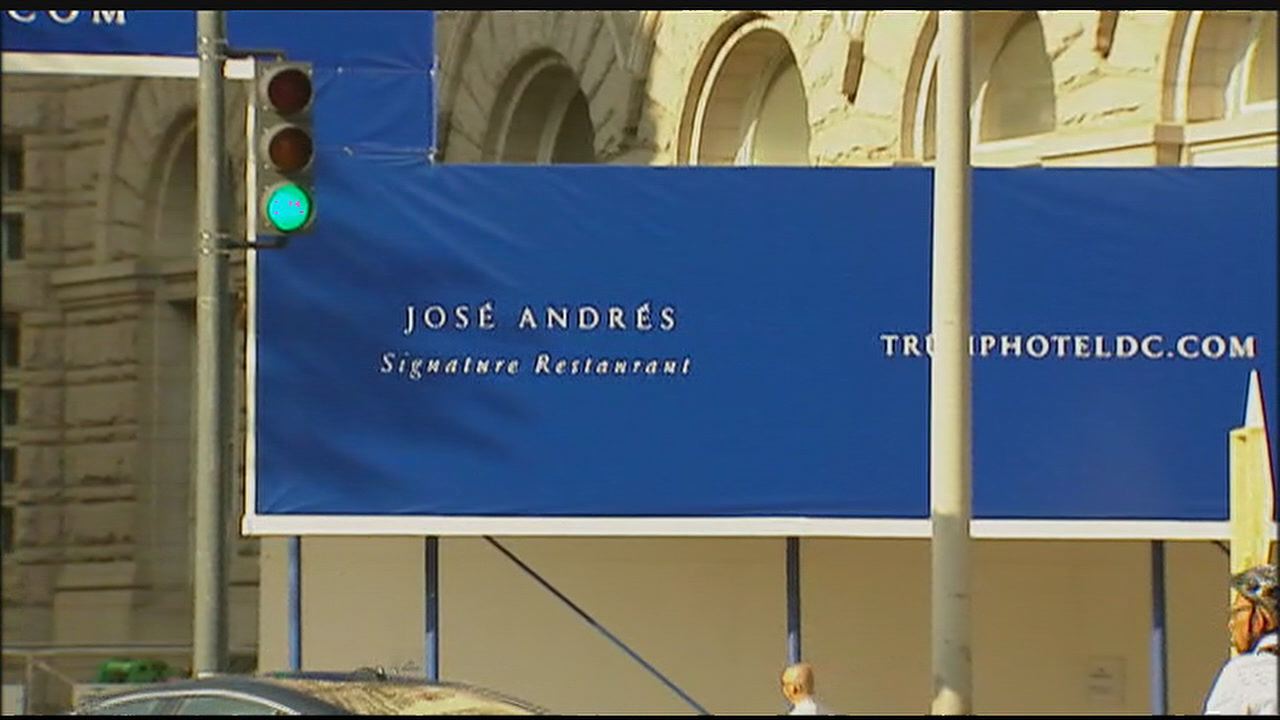 Donald Trump has sued José Andrés’ ThinkFoodGroup for backing out of opening the flagship restaurant in its new hotel in the Old Post Office building. (Photo: AP)

Andrés and Iron Chef Geoffrey Zakarian both dropped plans for restaurants in the hotel after Trump, a Republican who is running for president, called Mexican immigrants drug peddlers and rapists in a campaign speech on June 16. Zakarian was not included in Friday’s lawsuit.

“Donald Trump’s recent statements disparaging immigrants make it impossible for my company and I to move forward with opening a successful Spanish restaurant in Trump International’s upcoming hotel in Washington, D.C,” Andrés said at the time. “More than half of my team is Hispanic, as are many of our guests. And, as a proud Spanish immigrant and recently naturalized American citizen myself, I believe that every human being deserves respect, regardless of immigration status.” Andrés became a U.S. citizen in 2013.

“Mr. Andrés ‘ stated refusal to proceed with his obligations under the Lease were allegedly based on his personal offense to statements made by Mr. Trump with respects to illegal immigration during his June 16, 2015 presidential campaign announcement speech,” the lawsuit says. “Mr. Andrés’ offense is curious in light of the fact that Mr. Trump’s publicly shared views on immigration have remained consistent for many years, and Mr. Trump’s willingness to frankly share his opinions is widely known.”

It also says that Andres praised Trump in a January press release, issued when the deal was announced, for his business “acumen” and said he was “proud to partner with him.”

According to the lawsuit, ThinkFoodGroup sent a notice on July 17 alleging that, as a result of the content of Trump’s speech, the landlord had “constructively evicted” them and “violated the covenants of quiet enjoyment and good faith and fair dealing.” It also says ThinkFoodGroup demanded that Trump recant his opinions and ensure they weren’t repeated, restated or further disseminated.

The lawsuit says there are no provisions in the sublease or any other document that allow the tenant to terminate the agreement based on “personal offense with respect to comments made by the landlord, its principals or affiliates, including Mr. Trump.”

According to the document, ThinkFoodGroup was obligated to deliver 90 percent of construction documents by June 29, but did not.

The Trump organization claims not having the restaurant open or undergoing construction as will now be required will harm the hotel.

The lawsuit says the hotel has had to hire a new architect to prepare designs and plans for its flagship restaurant, and if a new tenant can’t be found, will be forced to design and develop the restaurant itself at “significant cost.”

To help take the edge off this summer’s heat, pastry chef and RareSweets owner Meredith Tomason is celebrating Christmas in July from July 29-Aug. 1. The bakery, located at 963 Palmer Alley NW in CityCenterDC, will be festively decorated and playing holiday music. 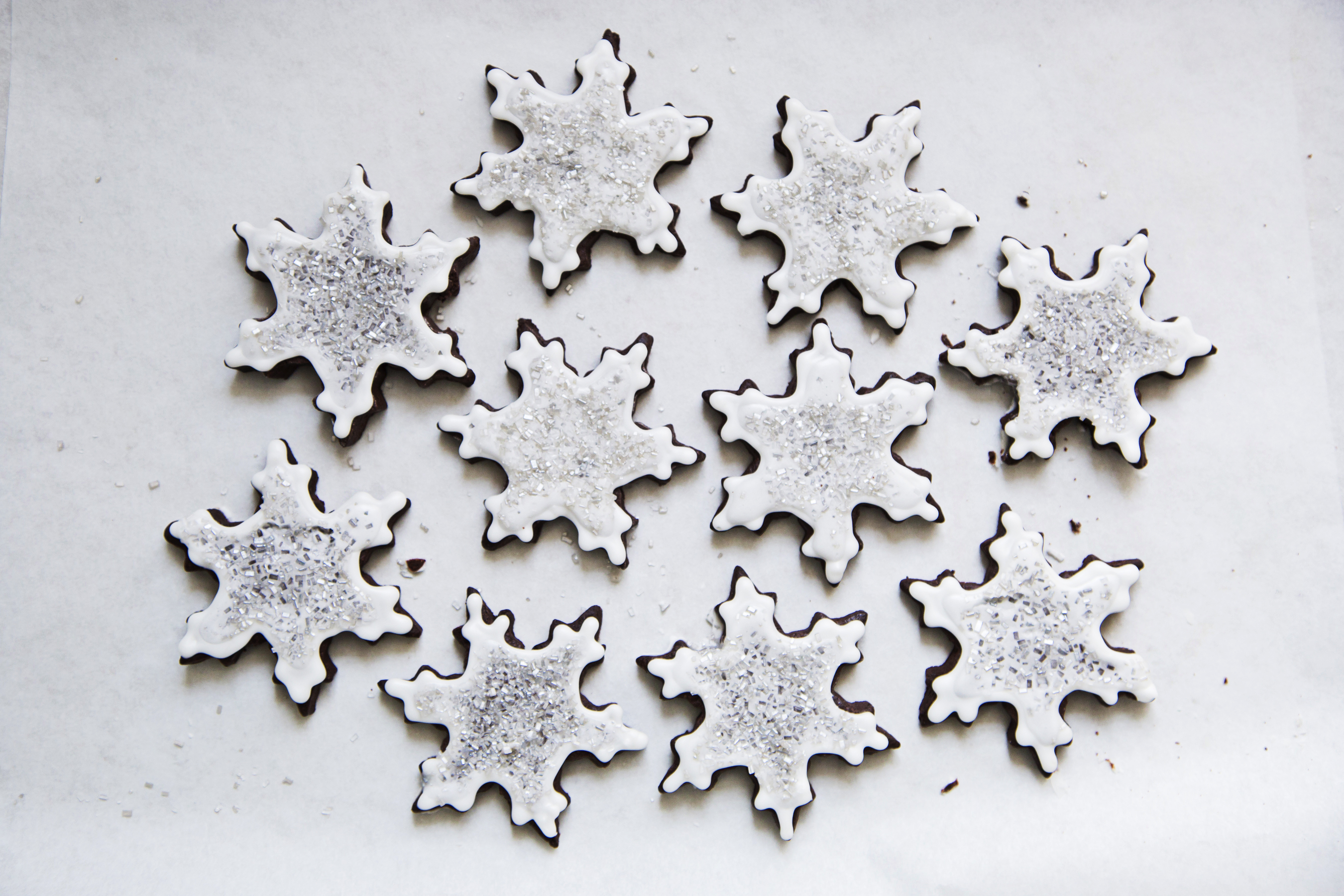 The holiday items are only available in the store. 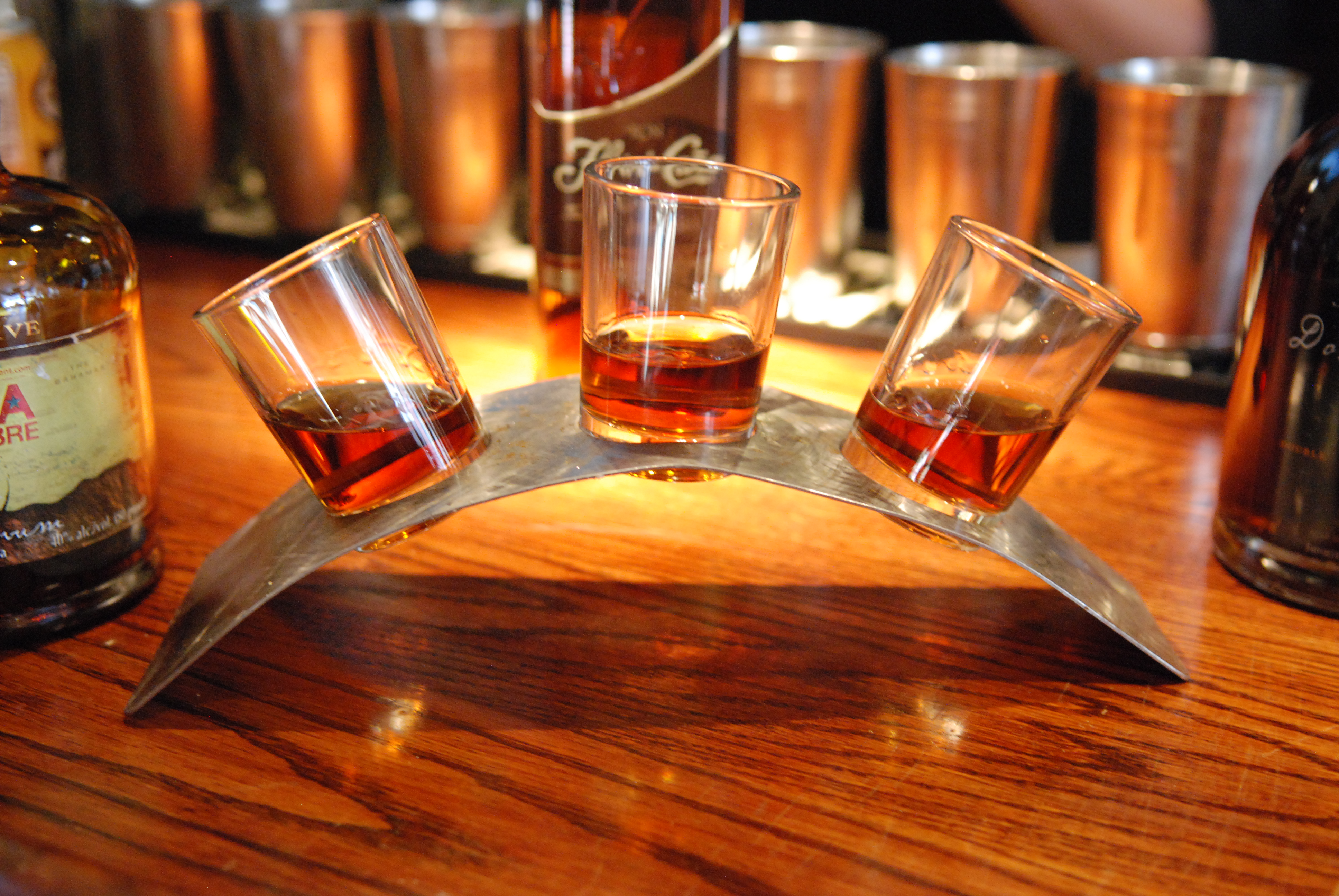 The Cuba Libre Flight includes the “Original” Cuba Libre made with Bacardi Gold Rum, Coca-Cola and lime; the Cherry Cuba Libre with Bacardi Torched Cherry, Coca-Cola and lime; and the Coconut Spiced Cuba Libre with Blue Chair Bay Coconut Spiced Rum, Coca-Cola and lime. The Rum Room Favorites flight includes Pyrat XO from the West Indies made with an amber rum blended in Guyana with Demerara and other Caribbean sugars; Flor de Caña 7 Year from Nicaragua with notes of almond, smoke, brown sugar, coffee and vanilla with a mild cinnamon spice; and El Dorado 15 Year from Guyana with a blend of aged rums at least 15 years old. The Whiskey Lovers flight includes Ron Matusalem 15 from the Dominican Republic; Cruzan Single Barrel from the U.S. Virgin Islands; and Zaya Gran Reserva 12 Year from Trinidad, a blend of three to five rums sourced from Trinidad and Tobago.

On Sunday, Aug. 16, Cuba Libre will host a Rum Day Sunday Funday with half-pride rums. The special offering will be available only in the bar and lounge during happy hour from 5-7 p.m. Cuba Libre’s has over 90 premium and flavored varieties from Guyana, Haiti, Nicaragua and Tortola. Rums are priced between $8 and $84 per shot.

In conjunction with National Farmers’ Market Week, which is Aug. 2-8, Chipotle Mexican Grill and ShopHouse, Chipotle’s Southeast Asian concept, are teaming up with farmers’ markets in the DMV to support the efforts of local farms. 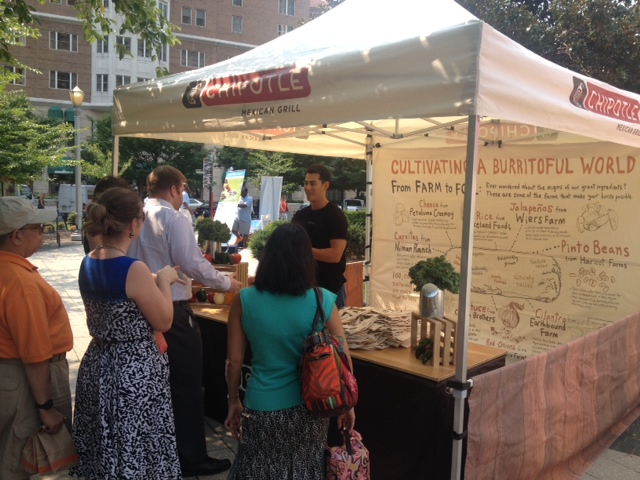 Chipotle and ShopHouse will be at area farmers’ markets this week passing out $5 tokens. (Photo: Chipotle)

On Aug. 2 Chipotle will host a tent at the Dupont farmers’ market at 20th Street NW between Massachusetts Avenue and Hillyer Place from 8:30 a.m.-1:30 p.m. To encourage shoppers to support their community’s farmers’ market, Chipotle will be offering free tokens redeemable for $5 worth of fresh ingredients at the market on a first-come, first-served basis.

Chipotle will also be on-site offering additional $5 vouchers at the Crystal City farmers’ market on I Street NW between 10th and 11th Streets on Aug. 4 from 3-7 p.m.; at rhe Foggy Bottom farmers’ market at 23rd and I Streets NW on Aug. 5 from 3-7 p.m.; and at the Silver Spring farmer’s market at Ellsworth Drive between Fenton Street and Georgia Avenue on Aug. 8 from 9 a.m.-1 p.m.

ShopHouse with join Chipotle at the Foggy Bottom market from 3-7 p.m. on Aug. 5 giving out coupons for free bowls, and will be at the Penn Quarter farmer’s market on Aug. 6 from 3-7 p.m. giving out the $5 vouchers.

The Latin-Asian inspired Zengo, 781 7th St. NW, 20001, has launched a new summer lunch special. Throughout August, guests who dine at the restaurant four times will receive their fifth meal free with the new loyalty card program. The special applies only to the bento box lunch, which offers four different bento box options. 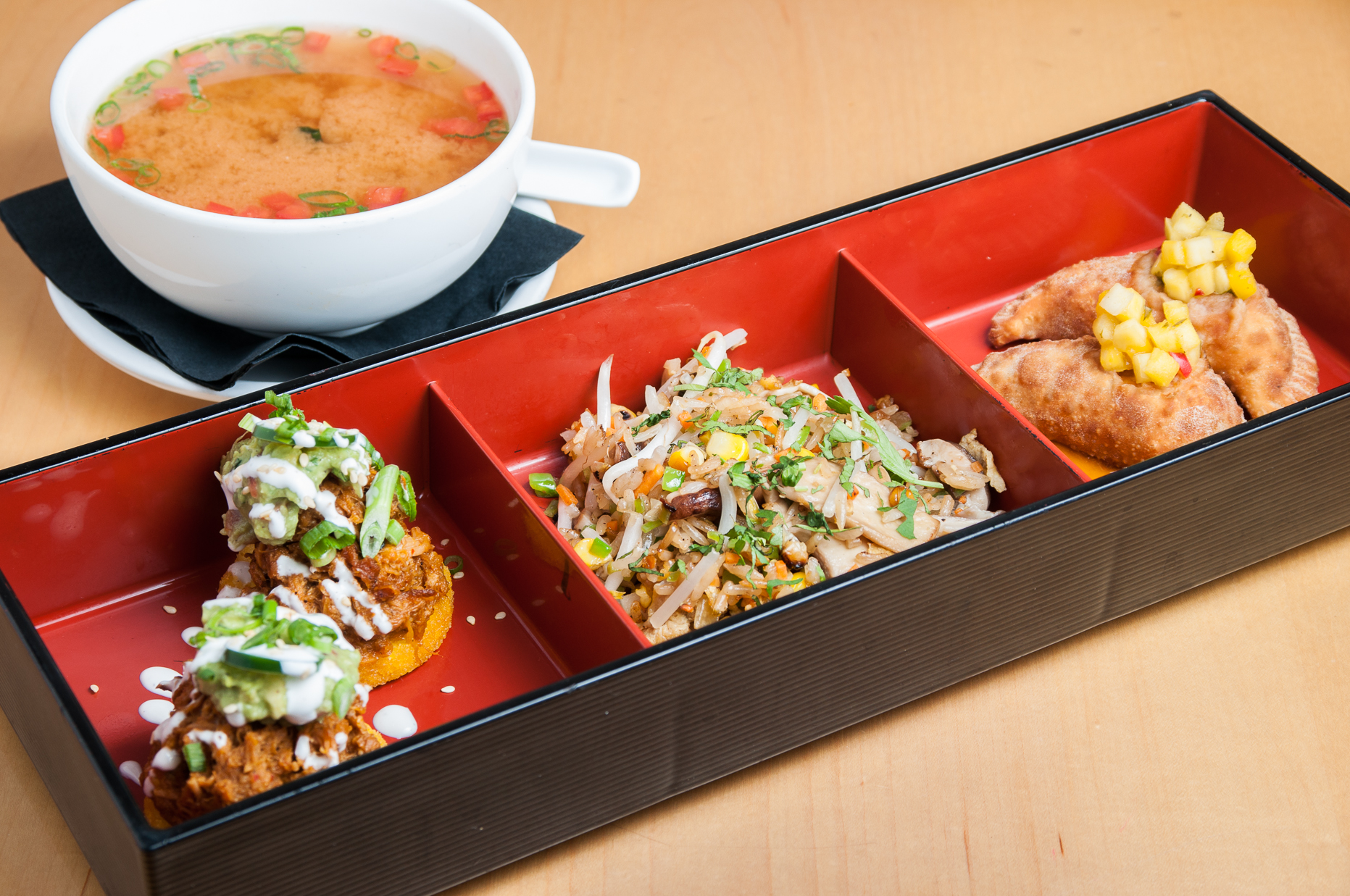 Buy four of Zengo’s bento boxes this month and get the fifth free, including the dim sum bento box. (Photo: Zengo)

The boxes are available from 11:30 a.m.-2:30 p.m. Monday through Friday. Bento boxes are also available for delivery in Washington, D.C., through the Caviar delivery service.