Deep Dish Any Chicagoan Would Love

If you are tired of the thin, cardboard crust that is the standard for most pizzas in the DMV, you’ll want to check out the deep-dish pies at Pi Pizzeria, 910 F St. NW. 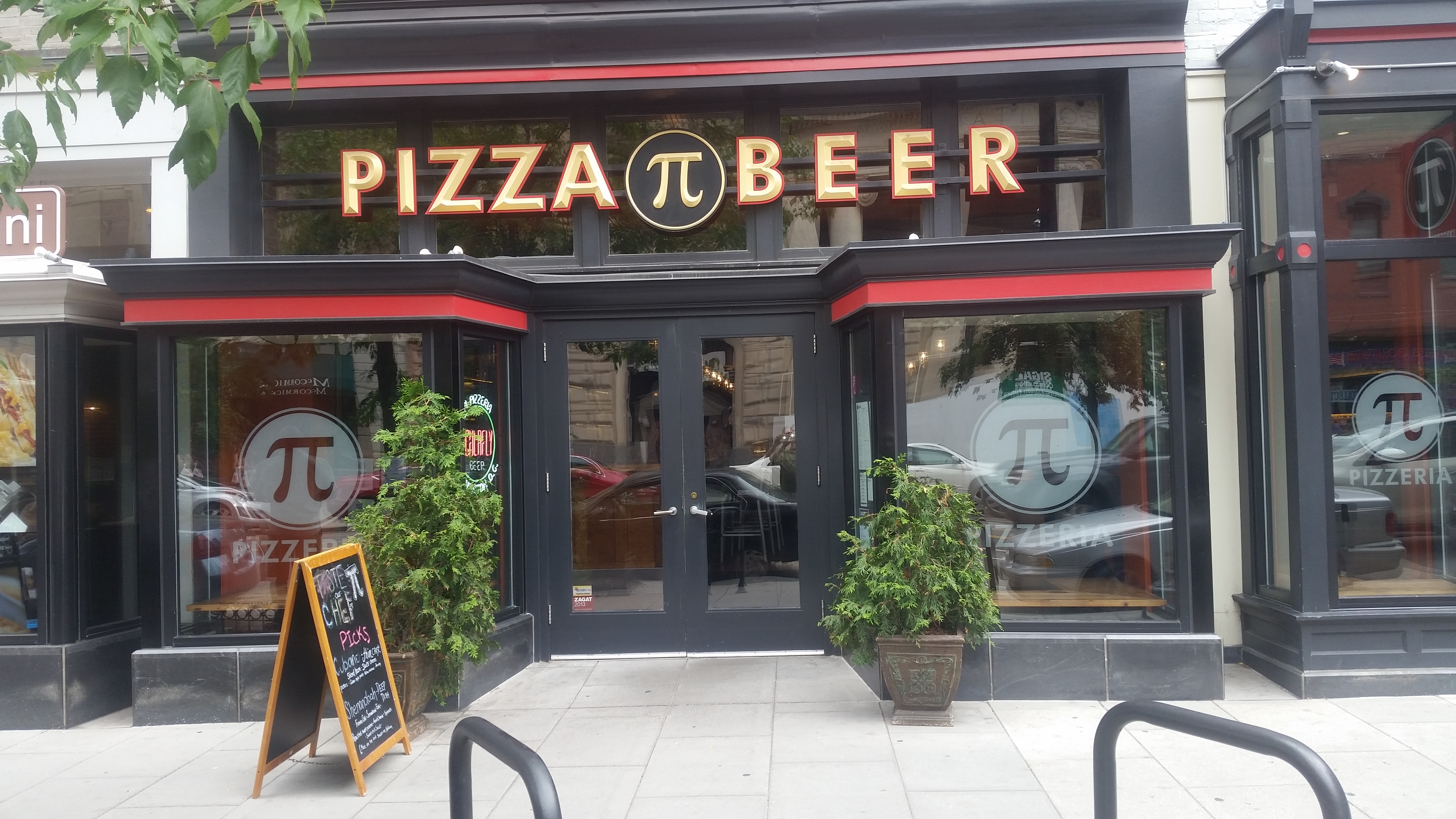 The chain, which began as St. Louis’s first food truck then moved into a brick-and-mortar location, turned seven this year. Now it has five locations in St. Louis as well as locations in Cincinnati, Ohio and Miami Beach, Fla. and Penn Quarter.

Pi is also President Barack Obama’s favorite pizza, which he first tasted on the campaign trail in St. Louis. The D.C. shop — nicknamed District of Pi — opened in 2011 and was the first restaurant to cook at the White House.

The pizza isn’t quite Chicago-style — Pi adds a lot of cornmeal to the crust, which is less buttery than the Windy City version, so you can pick up a slice and eat it fairly neatly with your hands, rather than the fork and knife casserole Chicago version. And it definitely isn’t St. Louis style, which is a thin, almost cracker-like crust.

Pi uses only fresh ingredients, make the meatballs from scratch, have the sausage locally made by an artisanal salumeria and do all the right things. They also have thin crust wood fired pizza with lots of interesting toppings, but Pi’s interpretation of deep dish is the best pizza at Pi. 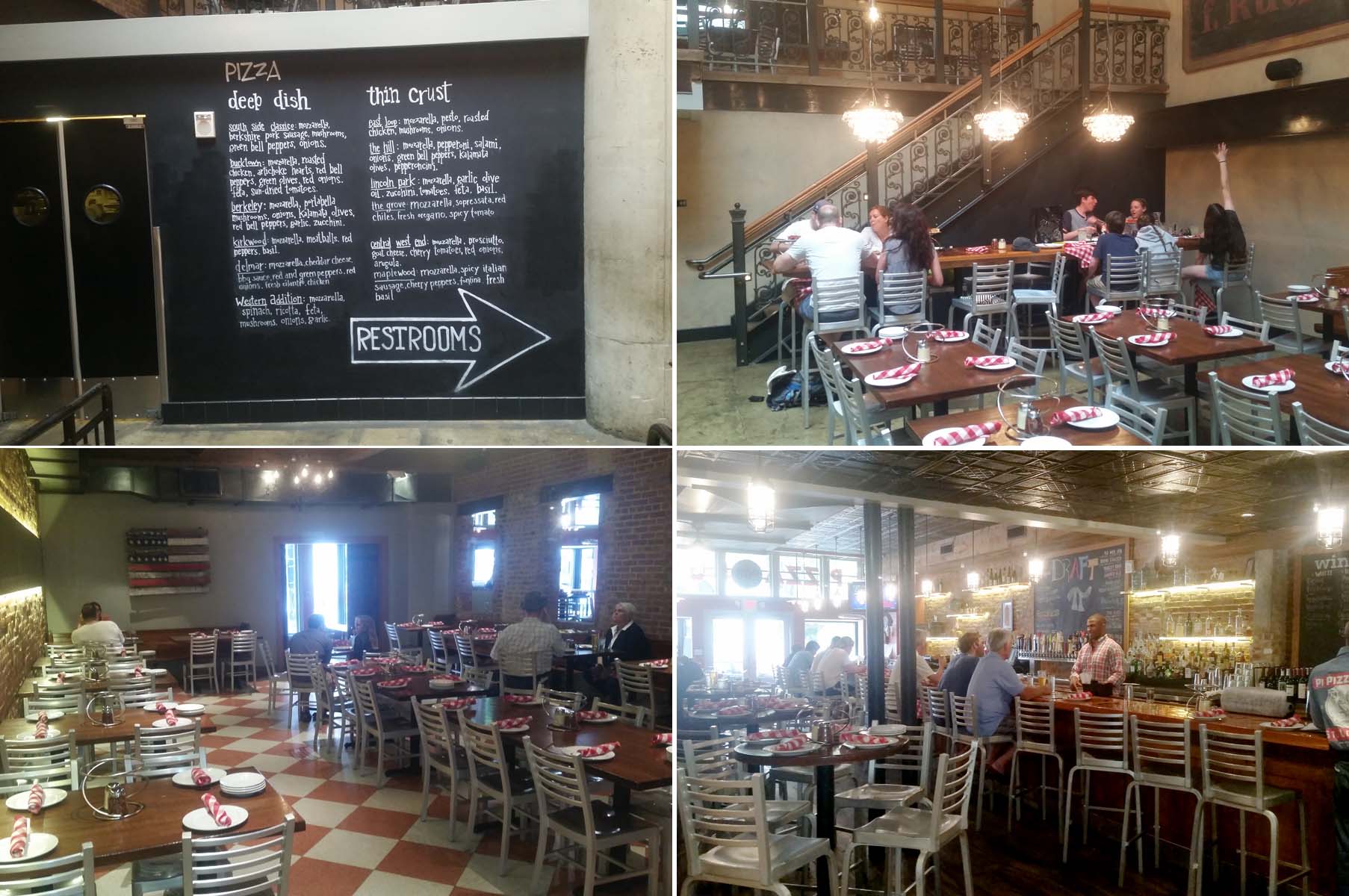 The menu wall (clockwise from top left), the back dining room, the bar and the front dining room.
(Photos: Mark Heckathorn/DC on Heels)

The deep dish pizzas come in small (9-inch) and large (12-inch) pies. There are six specialty pies such as the Berkeley with mozzarella, zucchini, portabella, red pepper, Kalamata olives and garlic; the Kirkwood with mozzarella, meatballs, red pepper and basil; and the South Side Classico with mozzarella, Berkshire sausage, mushroom, green pepper and onion. Specialty pies range from $16.95-$18.95 for a small or $21.95-$23.95 for a large. You can also create your own starting with mozzarella and tomato sauce for $13.45 for a small and $16.95 for a large plus extra for each topping that includes classics such as bacon, sausage, pepperoni, gourmet toppings such as anchovy, daiya vegan cheese or sopressata, and fresh herbs. 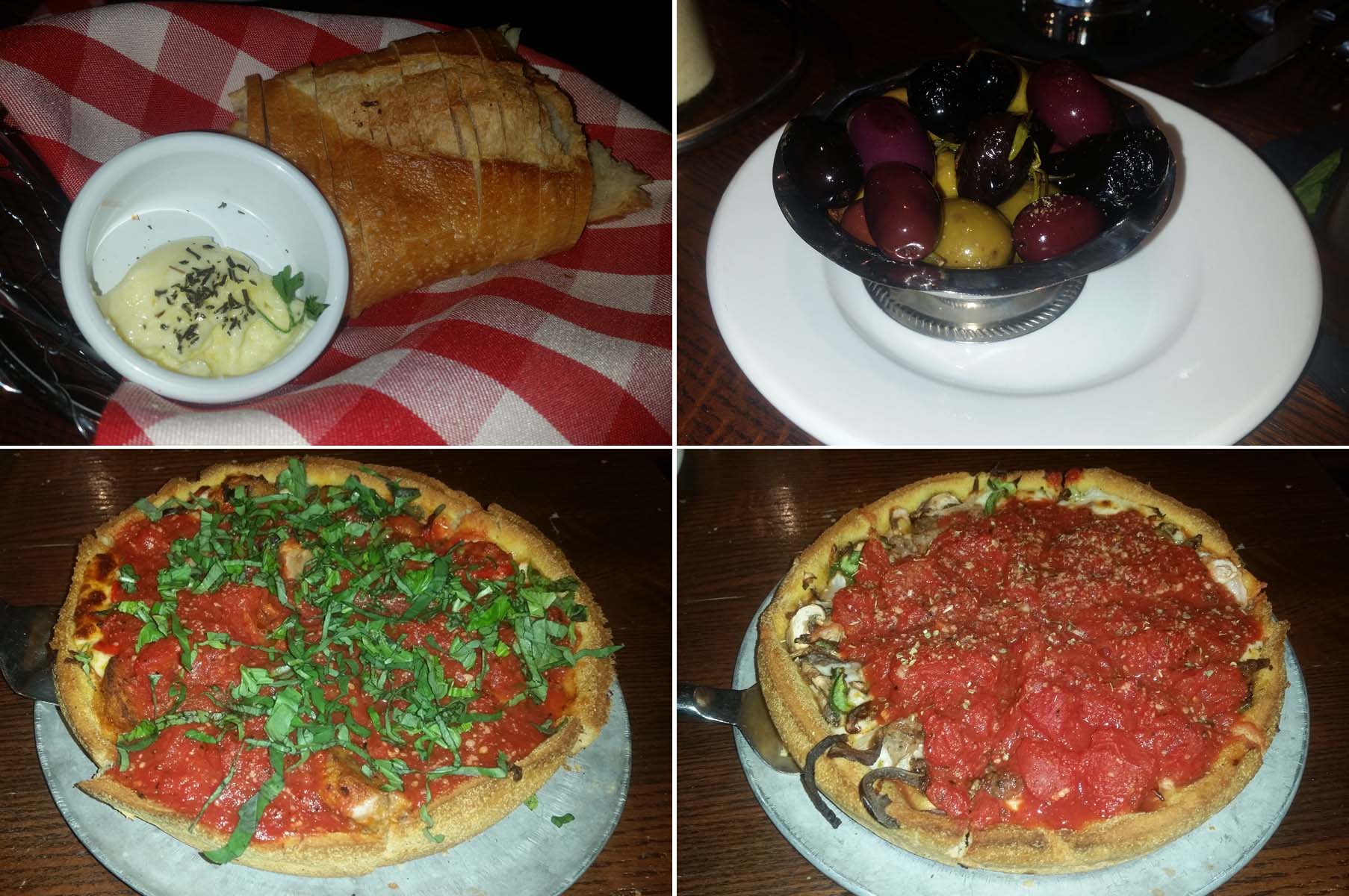 A small is enough for one person if you aren’t having anything else. If you plan on appetizers, salads and dessert, it is probably large enough for two.

Thin crust pizzas also come in small and large, but they are 12-inch and 16 inch, respectively. There are also six specialty thin crust pizzas such as The Hill with mozzarella, pepperoni, salami, green pepper, Kalamata olives, onions and pepperoncini; the Lincoln Park with mozzarella, zucchini, tomato, feta, basil, garlic and olive oil; and the Central West End with mozzarella, prosciutto, goat cheese, tomato, red onion and arugula. Thin crust pies range from $16.45-$17.45 for smalls and $20.95-$21.95 for large. You can also design your own thin crust and gluten-free thin crust is available upon request.

The restaurant also serves snacks such as spicy pickles, olives and a pint of mussels ranging from $3.95-$6.95 and appetizers such as garlic bread served with a whole roasted garlic and soft herb butter; meatballs and oven blazed wing ranging from $5.95-$10.95. Salads cost from $6.95-$11.95 and chicken can be added for an additional $3.25. Dessert, which range from $4.95-$6.95, include deep-dish apple pie, chocolate skillet cake, cheesecake and Moorenko’s ice cream. Pi also has a full bar with beer, wines and cocktails.