Noelia Switches from Italian to American 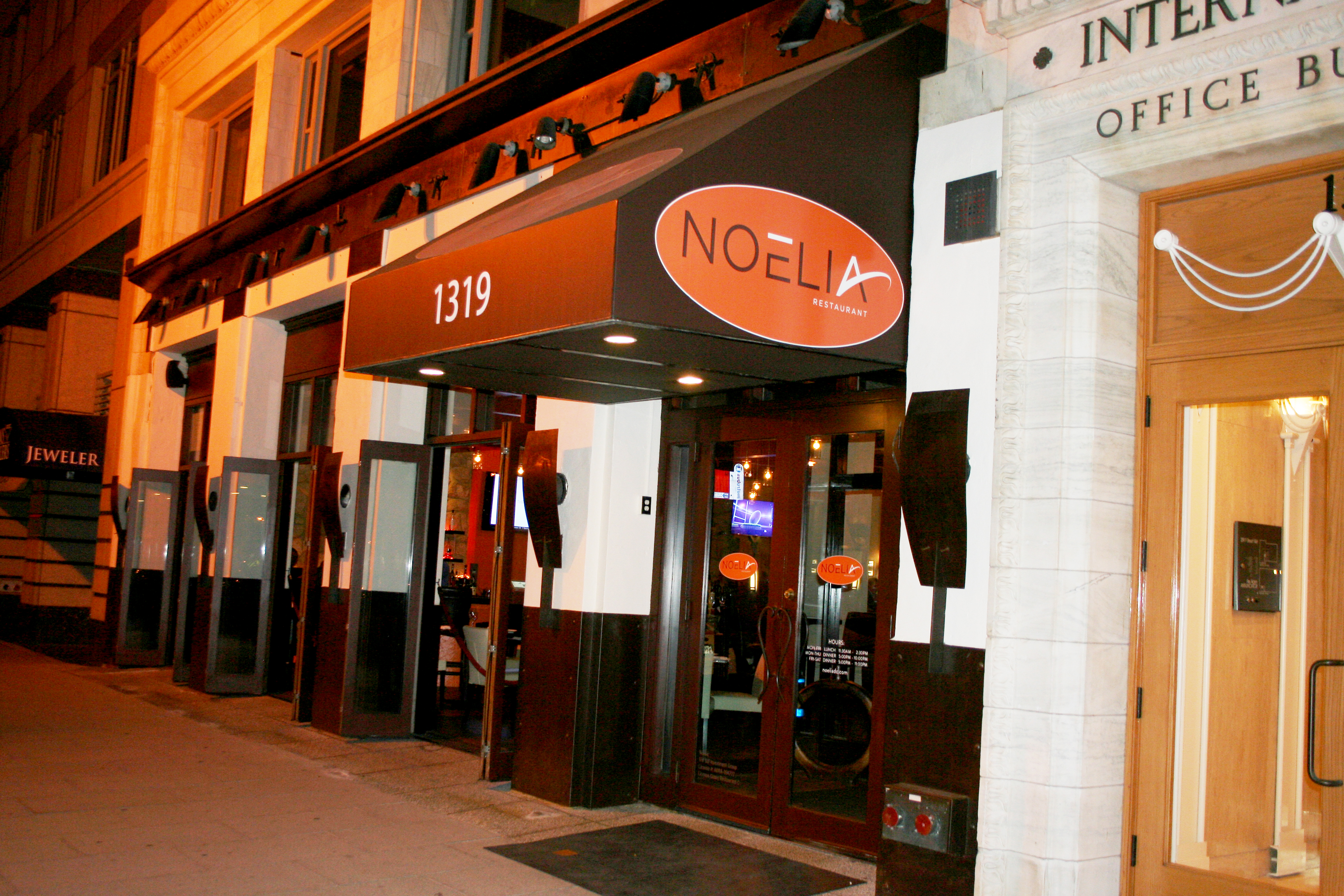 Although the name is the same, the pink logo has been replaced by orange and so have the lights along the front of the restaurant. But inside, it is still very much an Italian restaurant with dark wood, faux stone walls, glass and white, although some orange has been added inside as well.

Co-owner Kaiser Gill, a former Army officer and FBI agent, said they made the change because they wanted to hire Fisher as the executive chef and because he felt the restaurant was confined just doing Italian. With an American cuisine, he said, Fisher has the freedom to use seasonal items from local farmers’ markets. The menu will change seasonally.

A native of Maryland’s Eastern Shore, Fisher began cooking alongside his grandmother and received his first cookbook at the age of 7. At 14, he was already cooking professionally, which eventually led him to Le Cordon Bleu in Pittsburgh. After graduation, Fisher worked in the kitchen at The Ritz-Carlton, Tysons Corner and helped open four restaurants including The Ritz-Carlton Half Moon Bay and The Gaylord National, as well as a gastropub in Dallas. He then returned to Tysons Corner where he worked with RSVP catering company. He went on to serve as executive chef at Osprey’s Landing and most recently Dominion Valley Country Club.

However, Fisher’s menu is hit or miss. It is uninspired and has no standout entrees, although there are some tasty dishes. During a recent visit, the best dish of the meal was the $6 fried chicken and waffle sandwich made with crispy buttermilk brined chicken on Belgium waffles with picante Vermont maple butter, but it is only available on the bar happy hour menu. The chicken was crispy on the outside and juicy on the inside, while the maple butter added the perfect sweetness. 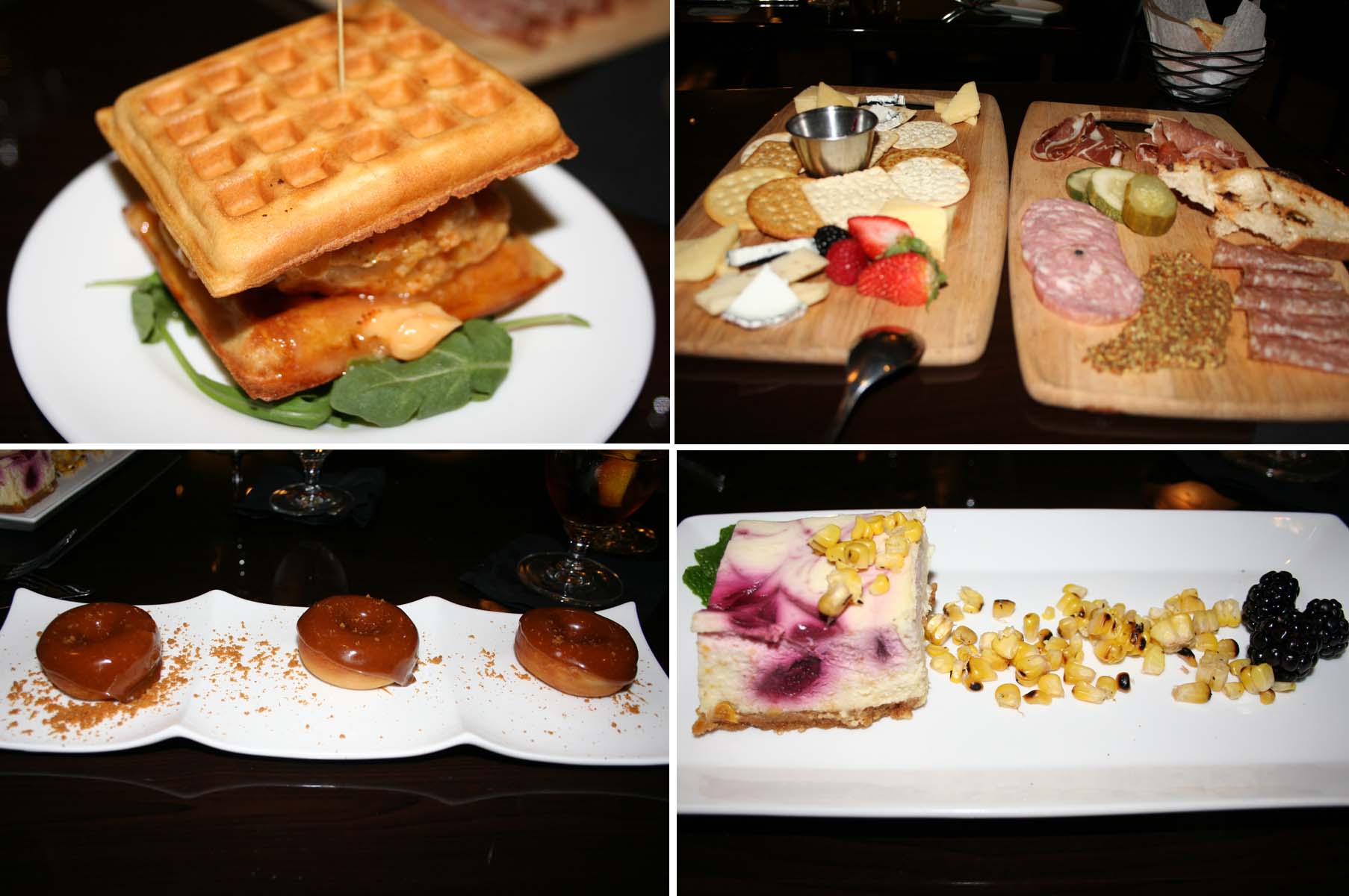 The chicken and waffle sandwich (clockwise from top left) off the happy hour bar menu was the best dish of the meal. Others include the cheese and cracker and carved meat boards, the tasty blackberry and corn cheesecake and fresh doughnuts with European cookie glaze. (Photos: Mark Heckathorn/DC on Heels)

For the most part, lunch and dinner menus are the same, although there are some medium plates at lunch that include chicken and waffles, a deconstructed N.Y. strip, a Wagyu bacon cheeseburger and a grilled chicken panini with pepperjack cheese, Granny Smith apple and a carrot and red onion marmalade. Lunch prices range from $5-$31.

The dinner menu includes smaller plates, priced from $5-$18, include roasted bone marrow with sweet garlic, peppery radish and fried shallot; a vegetarian “charcuterie” board with assorted pickled and grilled vegetables; and herbed ricotta and duck confit ‘sliders’ on fresh buttermilk biscuits with a Granny Smith apple-daikon radish slaw, pistachios and farmers market jam. The cheese and cracker board with fresh preserves was sparse for $15 and served with store-bought crackers while the chef’s selection of carved meats for $18 had an assortment of prepackaged pork products, which were good, with house-made probiotic pickles, whole grain mustard and two slides of grilled artisan bread.

Salads, priced from $11-$14, include a baby beat salad with grilled peaches, chives, Cherry Glenn chevere, spring onion yogurt and sherry vinaigrette; dinosaur kale with toasted garbanzo beans, almonds, sweet tomatoes, shaved onion and a honey and pink peppercorn vinaigrette; Caesar with romaine hearts, crispy pork “croutons,” pistachio, red onion, peppadew peppers, cantaloupe ribbons and aged balsamic. We sampled the summer market salad with gem lettuce, pulled chicken, avocado, red onion, charred corn, pickled cilantro, watermelon and buttermilk dressing. It was good, except for the chicken that was stringy pieces of dark meat with fat and connective tissue, obviously picked off the bone. It would have been better with chicken breast, although the watermelon was ripe and refreshing and the avocado creamy. 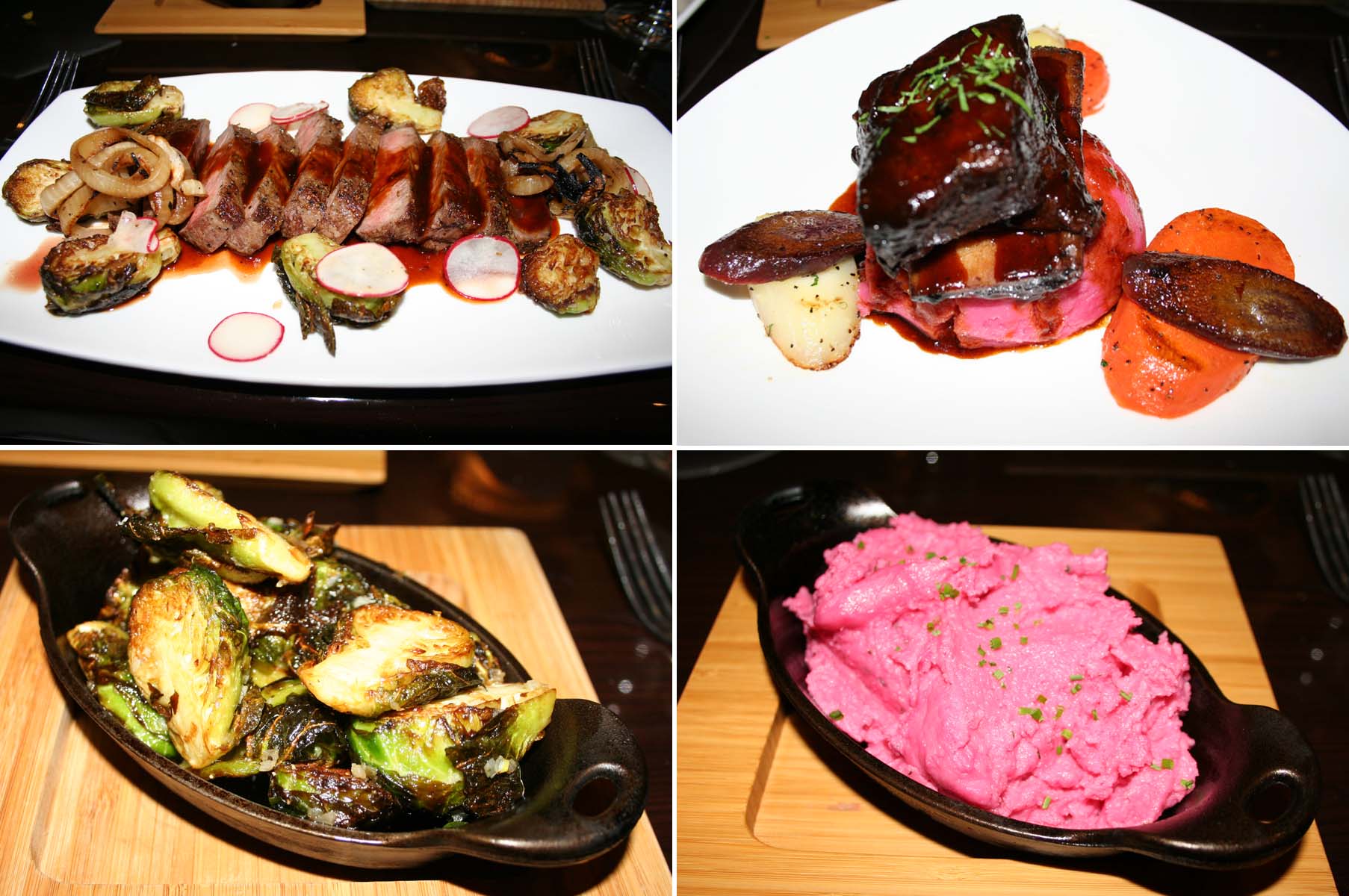 Noelia’s entrees include strip loin (clockwise from top left) and malt-braised short rib, while the better dishes were the beet-infused mashed potatoes and the crispy Brussels sprouts. (Photos: Mark Heckathorn/DC on Heels)

The standout dishes by far were the fried Brussel sprouts, which were crispy and delicious, and the beet infused mashed potatoes with truffle and thyme. The beets give the potatoes a bright purple color, but not the earthy beet flavor, while the truffle and thyme shine through. Other sides, priced from $6-$8, include stone-ground grits, roasted fingerling potatoes, asparagus and cast iron macaroni and cheese.

Homemade desserts, priced from $6-$9, include fresh doughnuts with European cookie glaze, which were light and fluffy, but overly sweet; and the corn and blackberry cheesecake with cinnamon graham crust. Although I could do without the roasted corn kernels on top of the cheese cake, the cheesecake itself was delicious and had corn baked in it.