If you’re looking for a place to enjoy a good meal and a waterfront view, set sail for Orange Anchor restaurant in Georgetown’s Washington Harbour, 3050 K St. NW. 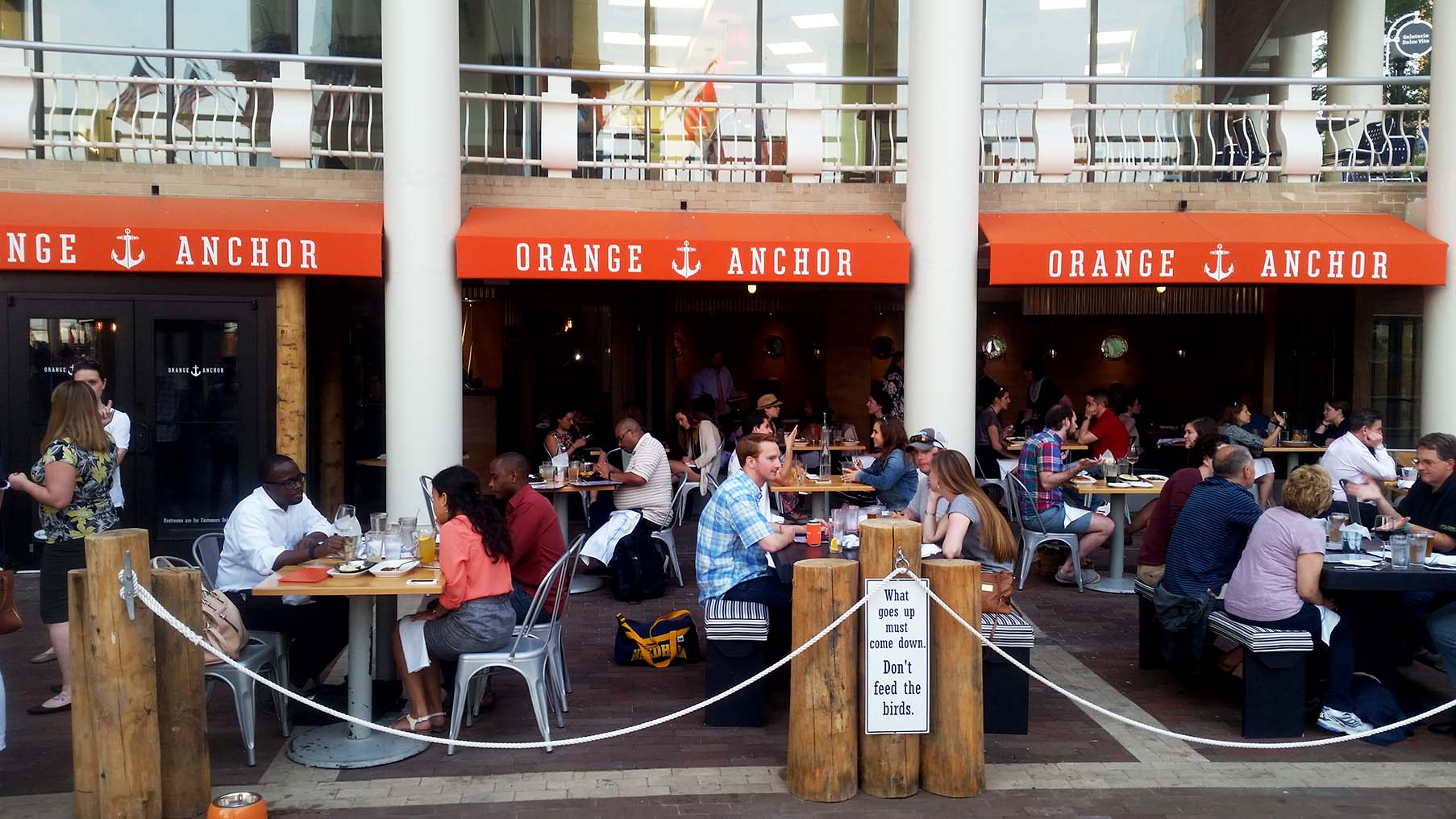 The restaurant, which opened in February, is the newest nautical-themed restaurant from Reese Gardner and his Wooden Nickle Bar Co., which also owns Cooperwood Tavern in Shirlington and Second State in D.C. Its patio is perfect for dinner on a nice spring evening watching Washington Harbour’s fountain with views of the Potomac River and Theodore Roosevelt Island.

For boaters and landlubbers, there are 28 varieties of rum, as well as cocktails from corporate beverage director Boris Stojkovic. And since you don’t want to break a bottle on your boat, there are 10 canned beers served in Orange Anchor koozies guests can keep as well as 10 brews on tap. They also have a selection of sparkling, red and white wines by the bottle or glass.

The Marlin Spike with Avuá amburana cahaça, grilled pineapple, Demerara syrup and sweet lime foam was my favorite. You could taste the pineapple and lime, but it wasn’t too sweet. The Sex on the Boat, made with coconut rum, pineapple juice, coconut cream, Demerara syrup and nutmeg, was also tasty similar to a piña colada. Cocktail prices range from $12-$14. 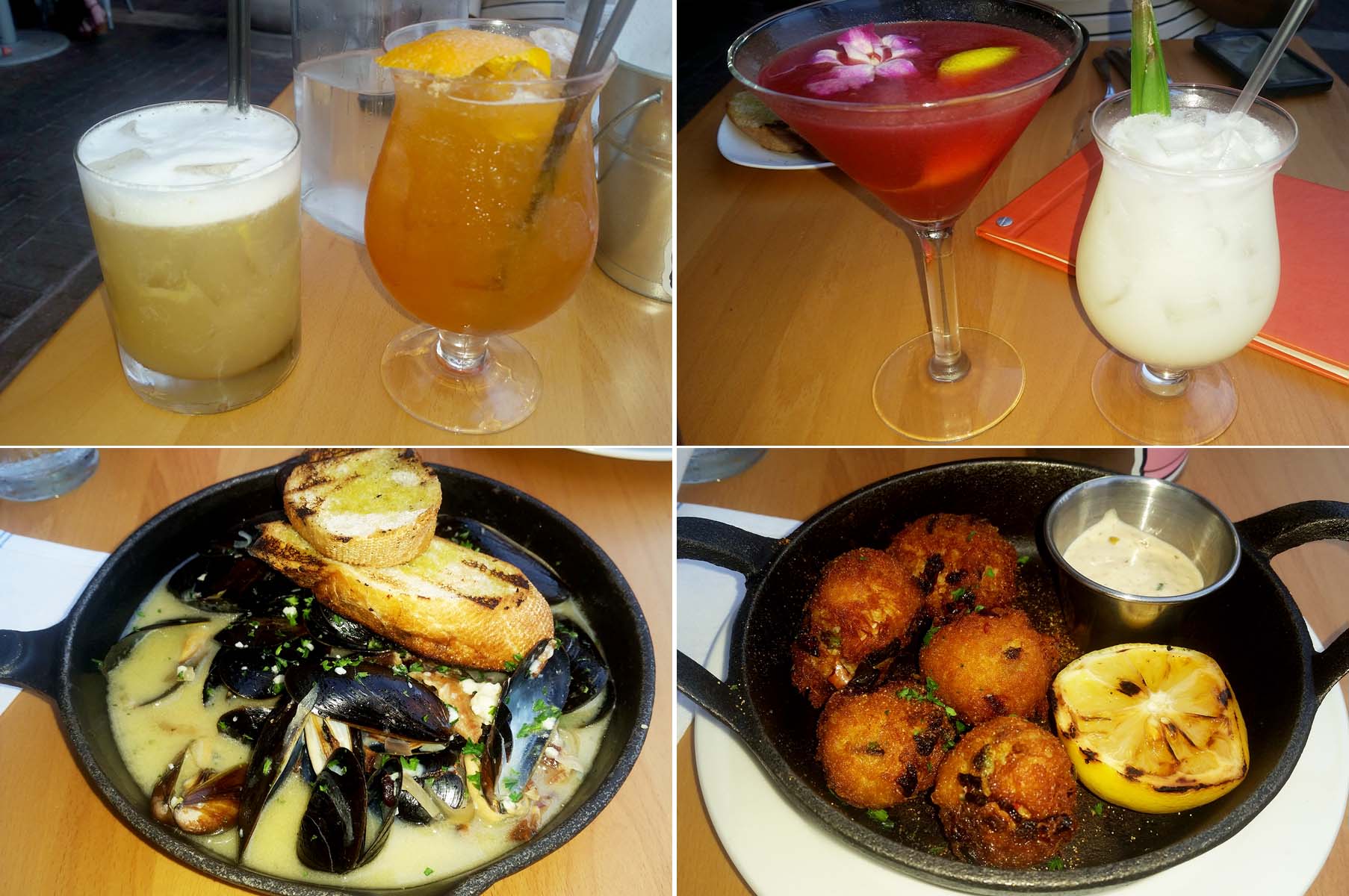 Corporate chef Allen Javery’s menu is seafood heavy with only a few non-seafood or fish items. In fact, if you don’t like want seafood, you have four choices: the cheddar burger, the brown ale chicken, a filet mignon or grilled Portobello. If you are a seafood lover though, you’ll be in heaven with oysters four way: chilled, grilled, fried or Champagne that are $17 for six or $32 for a dozen. Other starters include seared sea scallops and foie gras, caviar tacos, crispy tuna roll, clams casino and sautéed shrimp among others. Starters are priced from $8 to $32. Soups and salads are priced from $7-$15 and include a seared tuna nicoise salad and seafood chili with local white fish, shrimp and clams.

Meals start with a complimentary bucket of popcorn seasoned with Old Bay. For appetizers, I began with the crab fritters ($10) made with lump crab meat in beer batter served with grilled lemon and tartar sauce. They were little crab balls that were crispy on the outside and flaky inside. My friend ordered the hard cider mussels ($18) cook in hard cider with bacon, bleu cheese, caramelized onions and served with a grilled baguette. I don’t like mussels, but he liked them. In fact, he asked for extra baguettes to sop up all the juices.

Deciding what to order was hard. I was torn between the Shrimp and lobster roll ($18) made with chopped Maine lobster and North Carolina shrimp with lettuce and tarragon aioli on a butter toasted roll, the crab BALT ($18) made with a pan seared crab caked, bacon, avocado, bib lettuce and fresh tomato or the twin lobster tails ($38). I ordered the lobster, which was delicious served with a rum beurre blanc sauce. My guest chose the 10-ounce grass-fed filet mignon ($28) with a spice rum beurre blanc, which was also tasty. Other choices include ta pecan trout, swordfish and pepper crusted tuna. Sandwiches are priced from $13-$18 and a la carte entrees range from $21-$38.

Dinner at Orange Anchor tend to be on the pricey side, since sides have to be ordered separately, but are big enough for two. Sides are priced from $8-$14. One that you shouldn’t miss is the lobster mac n’ cheese made with large chunks of Maine lobster, cavatappi pasta and a five-cheese blend topped with crispy bread crumbs. The gouda mashed potatoes ($10) with smoked gouda cheese, garlic and cream is also a good choice. Others include fried Brussels sprouts, sautéed spinach, Old bay fries and grilled asparagus.

Desserts – all $10 each – can be skipped. The orange rum cake with olive oil pound cake, orange zest, orange juice and spice rum was drenched in the rum and not sweet at all. In fact, we couldn’t even finish it. The coconut key lime pie was a bit better with key lime, coconut milk and graham cracker and coconut crust. They also have a frozen dark and stormy with frozen whipped egg whites and cram mixed with rum, ginger and lime, and a stout brownie with vanilla gelato.