May Brings Many Outdoor, Food Events

It’s May, and the weather this weekend is supposed to be sunny and warm with temperatures in the 70s. It will be a perfect weekend for the many outdoor activities including the National Cathedral’s annual Flower Mart, Passport D.C.’s annual embassy tours, the Redskins’ Draft Day Party at FedEx Field, the Funk Parade and the fourth annual Running of the Chihuahuas at The Wharf. For foodies, you can eat sample foods at the National Harbor Wine & Food Festival, Taste of 8th, Taste of Dupont and the Bloody Mary Festival. There are plenty of indoor events too. 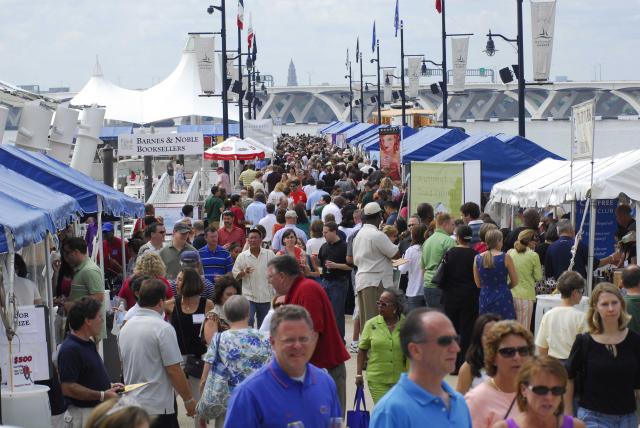 Visitors to the National Harbor Wine & Food Festival on the piers in 2013. (Photo: Trigger Agency)

The eighth annual National Harbor Wine & Food Festival returns to the National Harbor waterfront and is tent-covered. This year’s festival includes more than 150 international, regional and local wines, spirits and beers. Sample all of the varieties as well as purchase them by the glass or bottle. There is a Cinco de Mayo pavilion, special craft beer tasting bier garten experience, whiskey and bourbon tasting, three stages of live music and more. A cooking stage will include appearances by chef Scott Drewno of The Source by Wolfgang Puck, chef Mike Isabella of Graffiato and chef Victor Albisu of Del Campo on Saturday, and chef Marjorie Meek-Bradley of Roofers Union, chef Bryan Voltaggio of Volt/Range restaurant, and chef Rahman “Rock” Harper winner of Hell’s Kitchen. 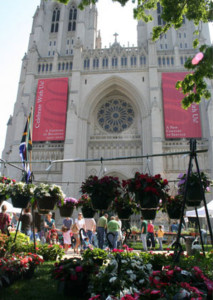 Each year, the Washington National Cathedral’s annual Flower Mart attracts 20,000 visitors who come to enjoy the grounds and gardens. This year’s Flower Mart celebrates Asia. Shop for plants, enjoy diverse food and enjoy puppet shows, rides on the 1890s wooden carousel and entertainment for the whole family. On Saturday, you can climb the Cathedral bell tower’s 333 steps for $10. Tours will be given every half hour between 10 a.m.-3:30 p.m. except at noon.

Around the World Embassy Tour 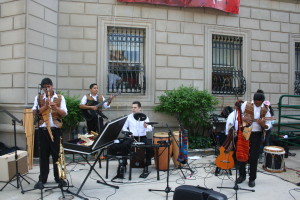 A Peruvian band plays outside the embassy during the 2014 open house. (Photo: Mark Heckathorn/DC on Heels)

Travel the world and experience the food, art, dance, fashion, music, innovations and manufactured goods from different countries without leaving D.C. This year, 42 embassies will open their doors for the Around the World Embassy Tour sponsored by Cultural Tourism D.C., allowing guests to pet alpacas, play with robots, learn indigenous dances and more. Many of the embassies are within walking distance of the Dupont Circle and Van Ness metro stations. Some embassies require ID. Next Saturday is the European Union embassies’ open house. 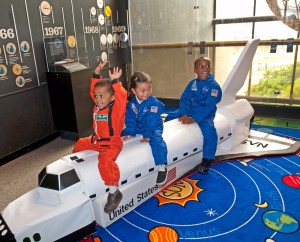 Find out what it is like to live and work in space from astronauts Patrick Forrester and Paolo Nespoli at the Smithsonian’s Space Day You can also learn about spacesuits and the tools used by astronauts and participate in STEM-inspired hands-on activities.

May 2 from 10 a.m.-3 p.m. at the National Air and Space Museum, 6th Street and Independence Avenue SW. Admission is FREE! 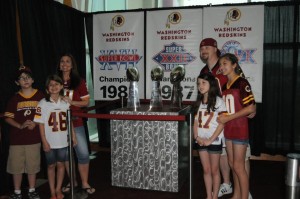 It’s time for the NFL draft, and the Washington team is throwing its Redskins Draft Day Party. The free event at FedEx Field includes appearances by players including Robert Griffin III, Dexter Manley, Ricky Irvins, Gary Clark and more. Wale is expected to perform between 12:30-1 p.m. Other events include live music and a performance by the Redskins Marching Band, passing and kicking contests, tours of the team’s locker room, pictures with the three Super Bowl trophies, rock climbing, hands-on tutorials, the debut of the 2015 Redskins cheerleaders, autograph sessions, a draft day scavenger hunt and free giveaways. Some food concessions will be open.

May 2 from 11 a.m.-4 p.m. at FedEx Field, 1600 FedEx Way, Landover. Parking lots open at 10 a.m., stadium gates open at 11 a.m. Entry is through the Comcast Sportsnet Gate (H) next to the Hall of Fame store. Parking and admission are FREE! Register online. 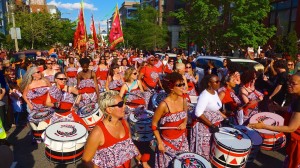 Saturday’s Funk Parade is actually an all-day festival with a street fair, the parade, a music festival and an after party. The day kicks off with the street fair from noon-5 p.m. in parking lots and alleyways along U Street between 15th Street and Vermont Avenue NW. You’ll find performances and workshops, including a guitar jam session, a songwriting class and hand dancing. The parade takes place from 5-7 p.m. Performers and pedestrians along with four marching bands – three from local schools and one from Brooklyn — will assemble at Florida Avenue and T Street NW, then proceed down T Street, north on Vermont Avenue, then west down U Street. A music festival with free concerts at 14 venues around the U Street including U Street Music Hall and DC9 from 7-10 p.m. The day winds down with an after party at the Howard Theater featuring Lee Field and the Expressons.

May 2 from noon-midnight at various venues in along the U Street corridor. Admission is FREE except the after party, which is $30.

Spring is here, which means it’s time for this year’s Fruhlingsfest at the Heurich House. The fun includes a May pole, scavenger hunts for the kids, face painting, live music, ice cream-making, a pig roast and beer from Virginia’s Old Ox Brewery.

May 2 from 1-4 p.m. at Heurich House, 1307 New Hampshire Ave. NW. Admission for people ages 13 and older is $20 online or at the door. Children 2-12 are $5. Admission includes unlimited food and non-alcoholic drinks. Guests 21 and older also receive two beer tickets. 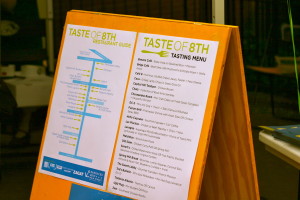 Once a year it’s possible to eat at just about every restaurant on Barracks Row in one afternoon. At Taste of 8th, more than 25 restaurants serve tapas-sized portions of their most famous dishes. If you already have a favorite dining spot or two on the Barracks Row, this is the perfect opportunity to check out some others. The food will take you from Ireland to Belgium, back to the United States, on to Korea and beyond. A menu by course of what every restaurant will be serving will be available during the event to plan a course-by-course, country-by-country sampling.

May 2 from 1-4 p.m. along Barracks Row, Eighth Street SE. Tickets are $20 for a pack of five online or at 8th and G Streets SE in front of Spring Mill Bread. 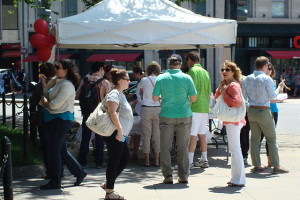 During Taste of Dupont, Dupont Circle restaurants will showcase their favorite appetizers, entrees, drinks and desserts. The progressive restaurant event allows patrons to explore neighborhood eateries by hopping from place to place with tasting tickets to enjoy the best Dupont restaurants have to offer. 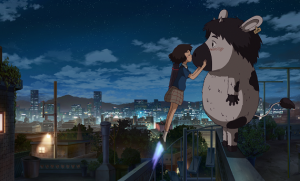 The Satellite Girl and Milk Cow kicks off Korean Film Festival D.C. at 2 p.m. on Sunday at the Freer Gallery. (Photo: Freer Gallery)

The Korean Film Festival D.C. featuring 17 Korean films kicks off with a full day of activities for the whole family from 11 a.m-4 p.m. at the Smithsonian’s Freer Gallery. Explore the richness of Korean culture through hands-on activities such as a Korean kite making workshop, learning to play jegichagi, an animated film, gallery conversations, a cooking demonstration by Jae Ok Chang and dance performances. Sunday’s film, The Satellite Girl and Milk Cow will be shown at 2 p.m.

May 3-June 25 at various times at the Freer Gallery of Art, Independence Avenue at 12th Street SW, or the AFI Silver Theatre, 8633 Colesville Road, Silver Spring. Admission at the Freer is FREE! Admission at AFI Silver is $12 for adults, $10 for seniors and $7 for children online or at the door. Click here to see the full schedule and purchase tickets. 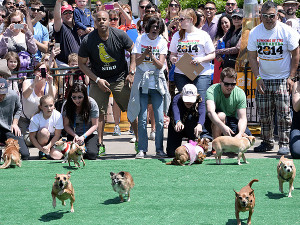 Chihuahuas race during the 2013 Running of the Chihuahuas. This year’s event takes place Sunday at The Wharf. (Photo: Getty Images)

It’s time for the fourth annual Running of the Chihuahuas. The stubby dogs will be racing for $500 in cash and prizes in contests including speediest dog, as well as all-breed contests for best dressed and best trick. Registration is $20 with proceeds going to Rural Dog Rescue. Hand Painted Swinger will perform live. Cornona and Corona Light will be for sale along with food from Red Hook Lobster Truck, Sol Mexican and Captain Cookie. An after party will be held at Cantina Marina on the waterfront with dogs welcome.

May 3 from 1-4 p.m. at The Wharf, Water Street SE between Sixth and Seventh Streets on the Southeast Waterfront. Admission is FREE! 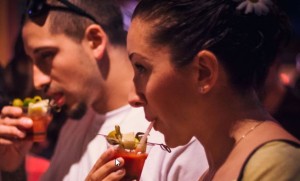 Sure, you’ve had a Bloody Mary, but have you had the chance to sample a dozen different Bloody Marys in one sitting? At The Bloody Mary Festival, you’ll get three hours of unlimited drinking along with sliders from Rocklands BBQ, live music and Crunkcakes. Participating bars and restaurants include Hank’s Oyster Bar, Del Campo, Range, The Heights, Founding Farmers, Pearl Diver Oyster Palace, Rebellion, The Source, Tico, Buffalo & Bergen, Glover’s Pepper Sauce, Gordy’s Pickle Jar and George’s Bloody Mary Mix. Guests will vote for “The Best Bloody Mary in D.C.”

Listen to Your Mother D.C.

Being a mother can be a thankless job. It’s also a subject ripe for artistic inspiration. At Listen to Your Mother D.C., local storytellers will offer live readings on the humor, frustration and pride that go along with motherhood. Invite your mom and share a laugh.