Two new restaurants opened Tuesday, Apr. 14 – one in Silver Spring and one on 14th Street NW. One was prepared and one wasn’t. One is on my list for a second visit, the other isn’t.

All Set Restaurant & Bar opened at 8630 Fenton St., Silver Spring, while Sette Osteria opened at 1634 14th St. NW. But the experience at the two was as different as night and day. 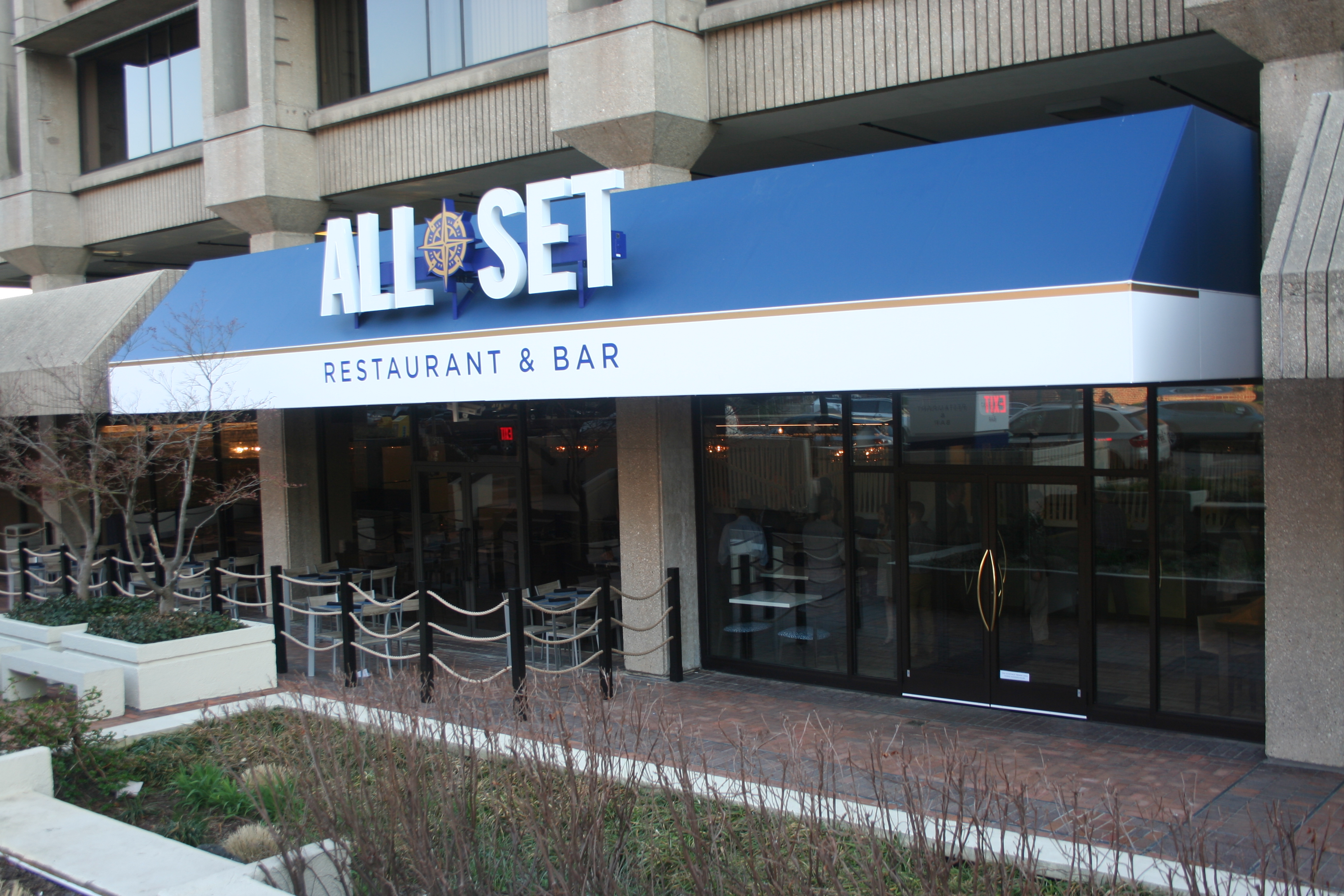 All Set Restaurant & Bar opened in the Montgomery Center on Fenton Street in Silver Spring on Tuesday.
(Photo: Mark Heckathorn/DC on Heels)

All Set has a nautical New England-theme with a sea blue and white décor, dark woods, gold banquettes and lots of white knotted rope. It reminds you of sitting in a sea shanty on the Massachusetts coast. The bar is large, along the back wall and includes a raw bar with lobster and shrimp cocktail, oysters on the half shell and littleneck clams, all with their origin marked on tiny blackboards. 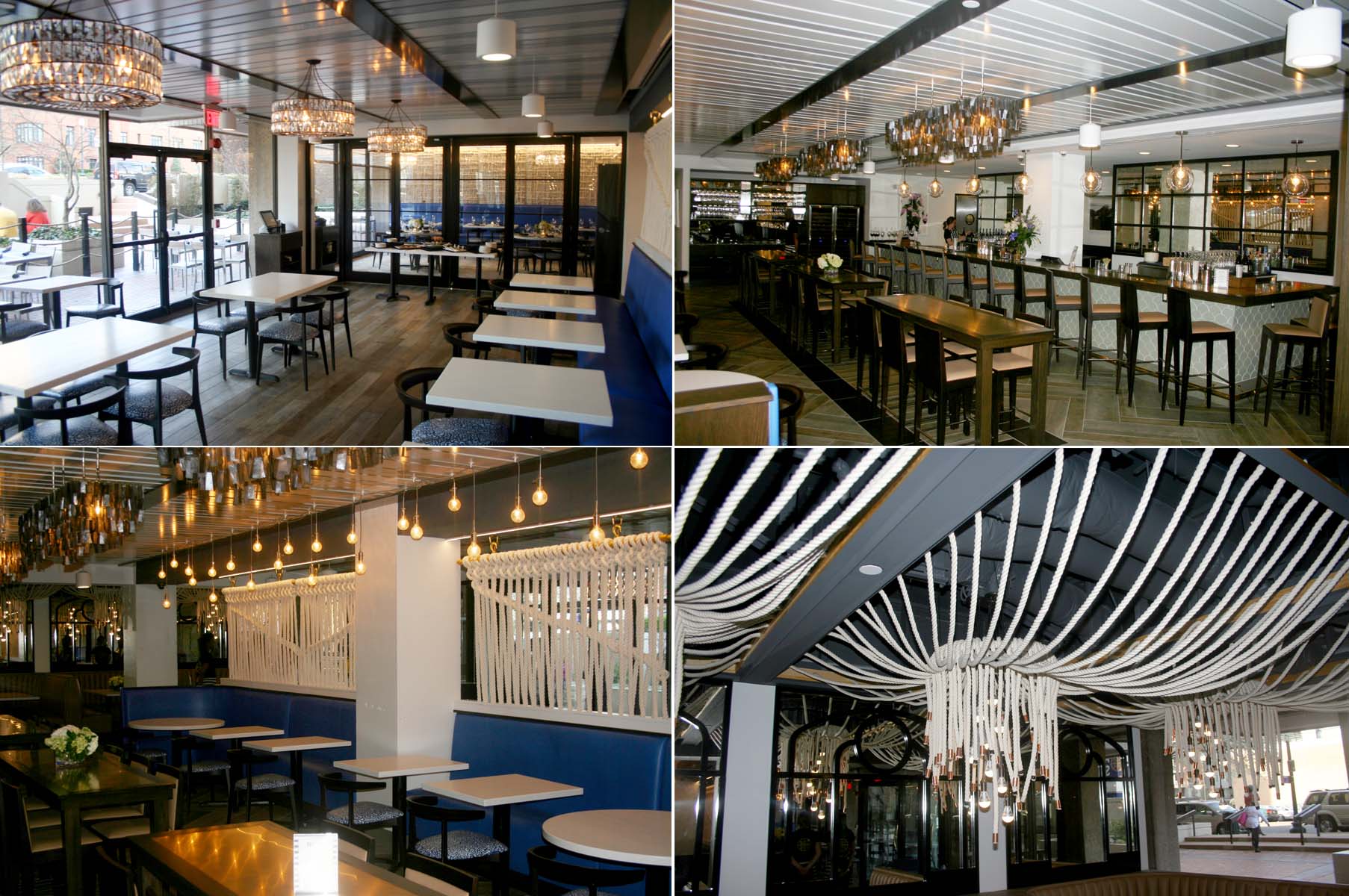 The interior of All set from the dining room to the bar is reminiscent of a New England sea shanty. (Photos: Mark Heckathorn/DC on Heels)

The shrimps where huge and the lobster roll was the star with chives, chervil and tarragon served on toasted rolls shaped like little loaves of bread. Another favorite was the pulled pork sliders with BBQ sauce and cole slaw. 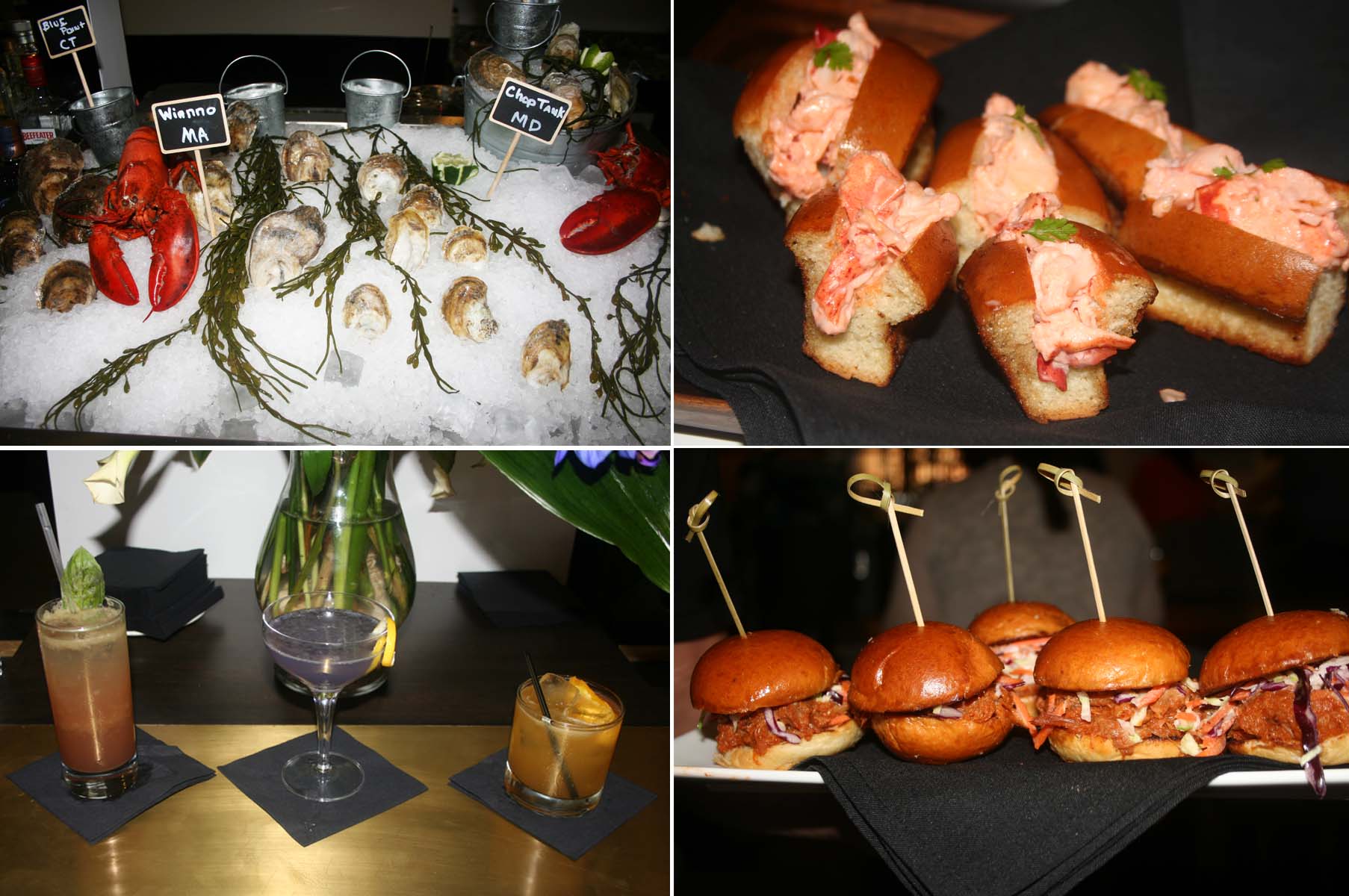 All house cocktails have nautical names and cost $12. My favorite was the Perfect Storm with rum, lime, pineapple, ginger and Goslings ginger beer. It was refreshing and perfect for sipping on the restaurant’s covered patio as warm weather arrives. Others include The Provincetown with cranberry-infused vodka, citrus, cucumber juice, basil-mint syrup and ginger juice; and the Crazy for Layla with Cold River gin, orange liquor, citrus and crème de violette.

Service was excellent and on point with food and drinks being passed constantly. Trash was quickly collected and even water glasses were kept filled. With plenty of on street parking as well a free parking in the county parking garages in the evenings and on weekends, All Set is certainly worth a trip to New England without leaving Silver Spring. 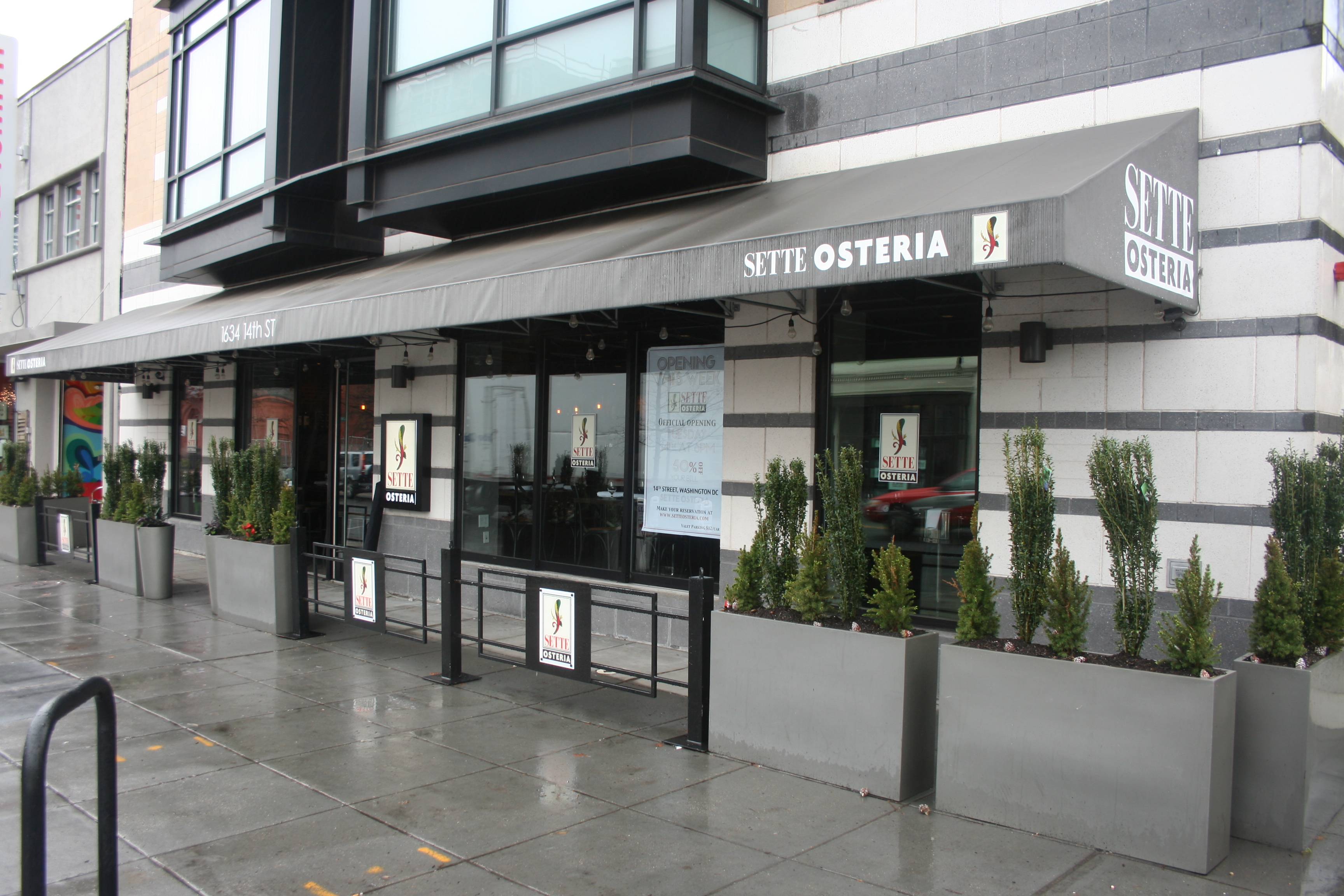 Sette Osteria also opened Tuesday on 14th Street NW, but with not so stellar food or service. (Photo: Mark Heckathorn/DC on Heels)

The décor at Sette Osteria is an improvement from the former M Café Bar, which was also owned by Iraklis Karabassis of IK Retail Group and closed in January. Gone are the Andy Warhol prints of Marilyn Monroe, Sophia Loren and Marcello Mastroianni, yellow walls and modern white furniture and chandeliers, replaced by black and white décor, exposed brick walls, dark wood floors and unpadded wood booths and leather chairs. It has a more relaxed, casual atmosphere than its predecessor. 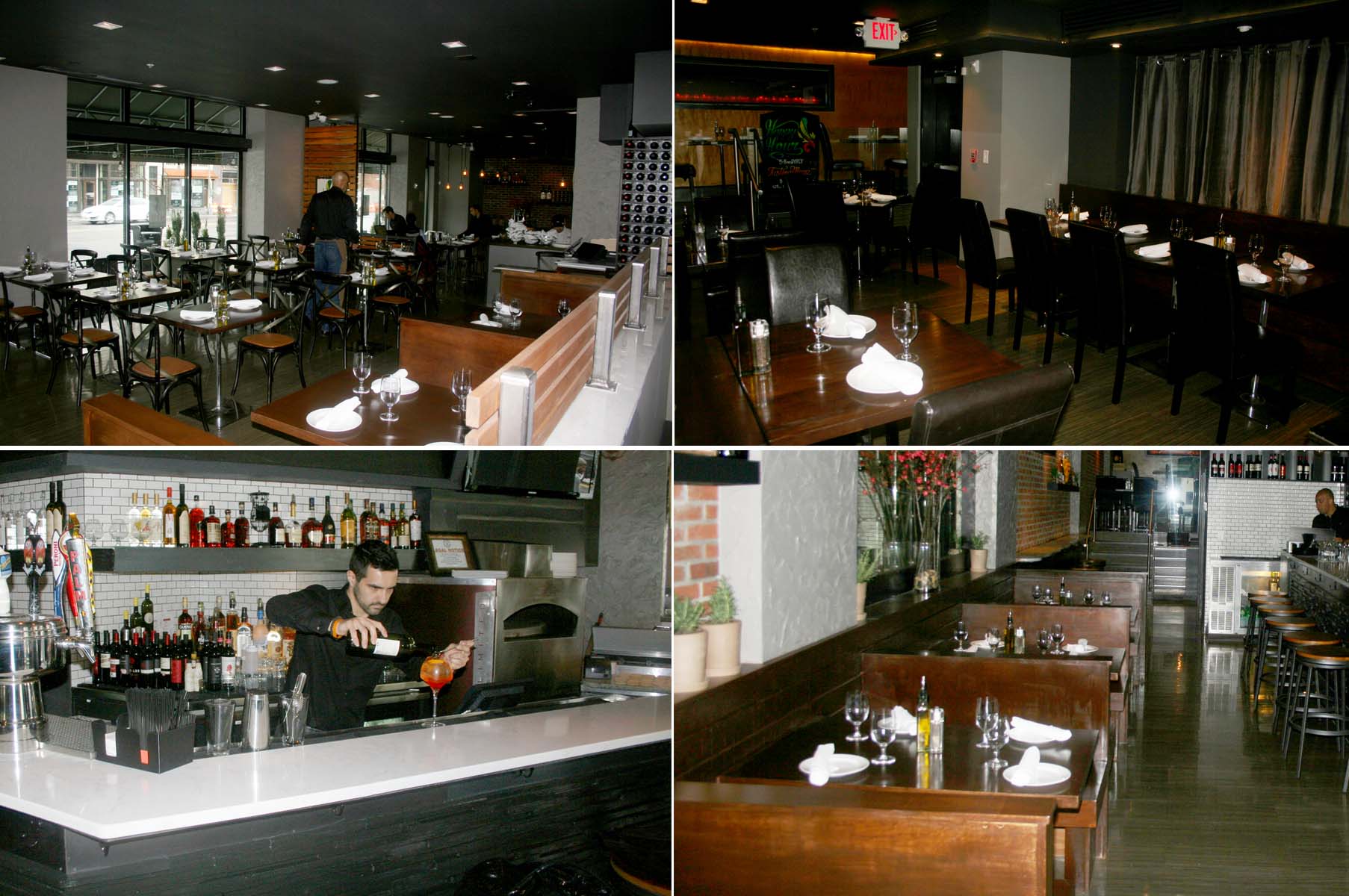 Sette Osteria on 14th Street NW has been remodeled from the former M Cafe Bar from the same owner. (Photos: Mark Heckathorn/DC on Heels)

Unlike All Set, Sette Osteria was ill prepared for its grand opening. Invitations had been sent to the media as well as tenants in many of the apartment and condo buildings in the area. All the guests were packed into the small bar area and service was slow with only one bartender making limited cocktails and another serving only beer and wine.

Most of the cocktails – named No. 1 through No. 9 on the menu – weren’t available because the fruit purees and house-made syrups weren’t available. When they are available, they will cost $12 each, $2 more than at the original, sister restaurant in Dupont. Also unavailable was draft beers because the lines hadn’t been run yet.

The passed food samples were even fewer and far between. With no dedicated wait staff, servers quickly passed the bites while waiting on tables in the dining room. The only samples I was able to try were the bruschetta, mozzarella alla caprese and tuna tartare, none of which were standout dishes. I also sampled the mini margherita pizzas, but they had become cold waiting for servers to pass them.

The menus at the bar were missing the food pages and the 14th Street location’s website isn’t working yet – it just loops back to the homepage for both locations so I don’t really know what is on the menu, although I was told by bartender Louis that it is the same are Dupont’s. A press release said menu prices range from $8-$28.

Opening night was definitely disappointing considering the restaurant’s executive chef is Italian-born Nicola Sanna. I was expecting to sample some of Sanna’s signature house-made pasta and other Italian dishes, not the same food found at every Italian restaurant in D.C.

It’s probably best to stick with one of the other fine Italian restaurants in the city a few more weeks before checking out Sette Osteria. Here’s hoping that Sette Osteria can work out the kinks and get service on track.