Chef José Andrés newest fine-dining restaurant is China Chilcano, 418 7th St. NW, in the Andrés block of Penn Quarter between Jaleo to the north and Oyamel to the south. It fuses Peru’s native Criollo cuisine with Chinese Chifa and Japanese Nikkei cuisines. The name pays homage to Peru’s famous fish stew and one of its national drinks, both called Chilcano. 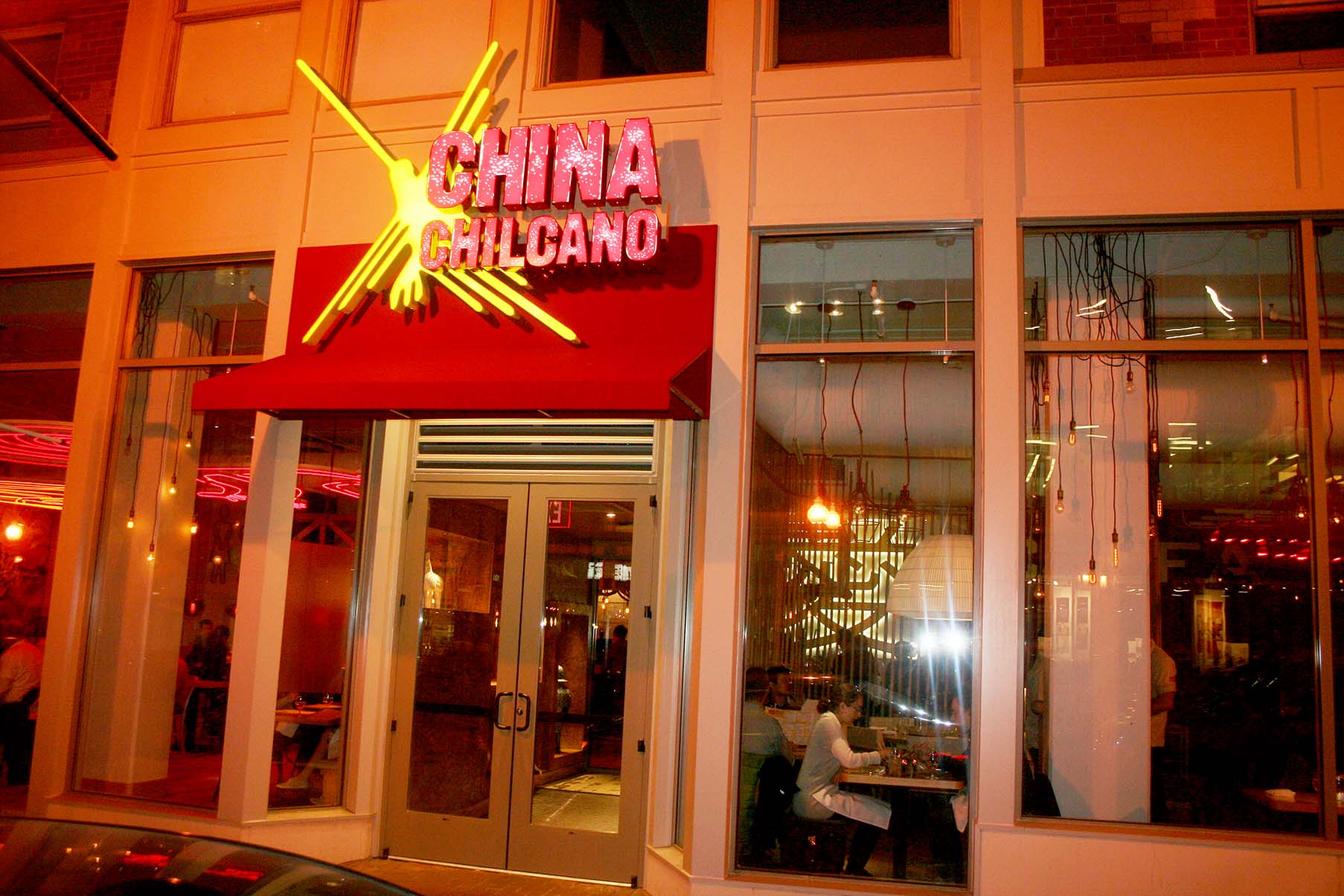 “Peru is an astounding place. You have incredible native foods, Chinese classics done the Peruvian way, raw seafood like you may find in Japan, all in one beautiful country,” said Andrés. “My team and I spent a great deal of time there as well as in Asia these past few years and are very excited to share this world of flavors.”

Upon entering the 158-seat restaurant —designed by Spanish architect and designer Juli Capella — you think you’re entering a construction zone with a foyer made from unfinished pressed board, unfinished plywood wait stations and a distressed floor that had been painted years ago and is in need of a new paint job. On one wall there is a mural of a floral-tattooed femme fatale by Cecilia Paredes called “Both Worlds,” painted red and white wooden pallets hanging from the ceiling and a traditional sunken Japanese dining table. Lighting is provided by mismatched, exposed bulbs hanging from the ceiling and red neon lights meant to evoke the ancient designs found in Peru’s Nazca desert. There’s also a 300-gallon fish tank.

Andrés, who is known for his Spanish tapas at Jaleo and mezze at Zaytinya, has found a way to make his small plates even smaller. While the server recommended first-time visitors order two or three plates each, dinners really need to order three or four each with these tiny servings. With plates priced from $9-$65, the average is in the $15 range. That means the average diner will spend $45-$60 just one food without drinks.

I personally am over the small plates format that so many chefs love right now. While they tote their menus as tasting menus meant for sharing, it’s really a way to get diners to spend more money without experiencing sticker shock. I want more than two or three bites of my meal without dropping $100 for an average weeknight meal.

China Chilcano’s menu is divided into sections including Dim Sum, Chaufas and Tallarines (fired rice and noodles), Piqueos, Salsas (unlike Tex-Mex restaurants, salsa is not included with your meal), Salads and Vegetables, The Chinese Connection, Peruvian to the Bone, Soups, Ceviches and Tiraditos, Causagiris (a cross of causa and nigiri) , Sashimi and Nigiris. 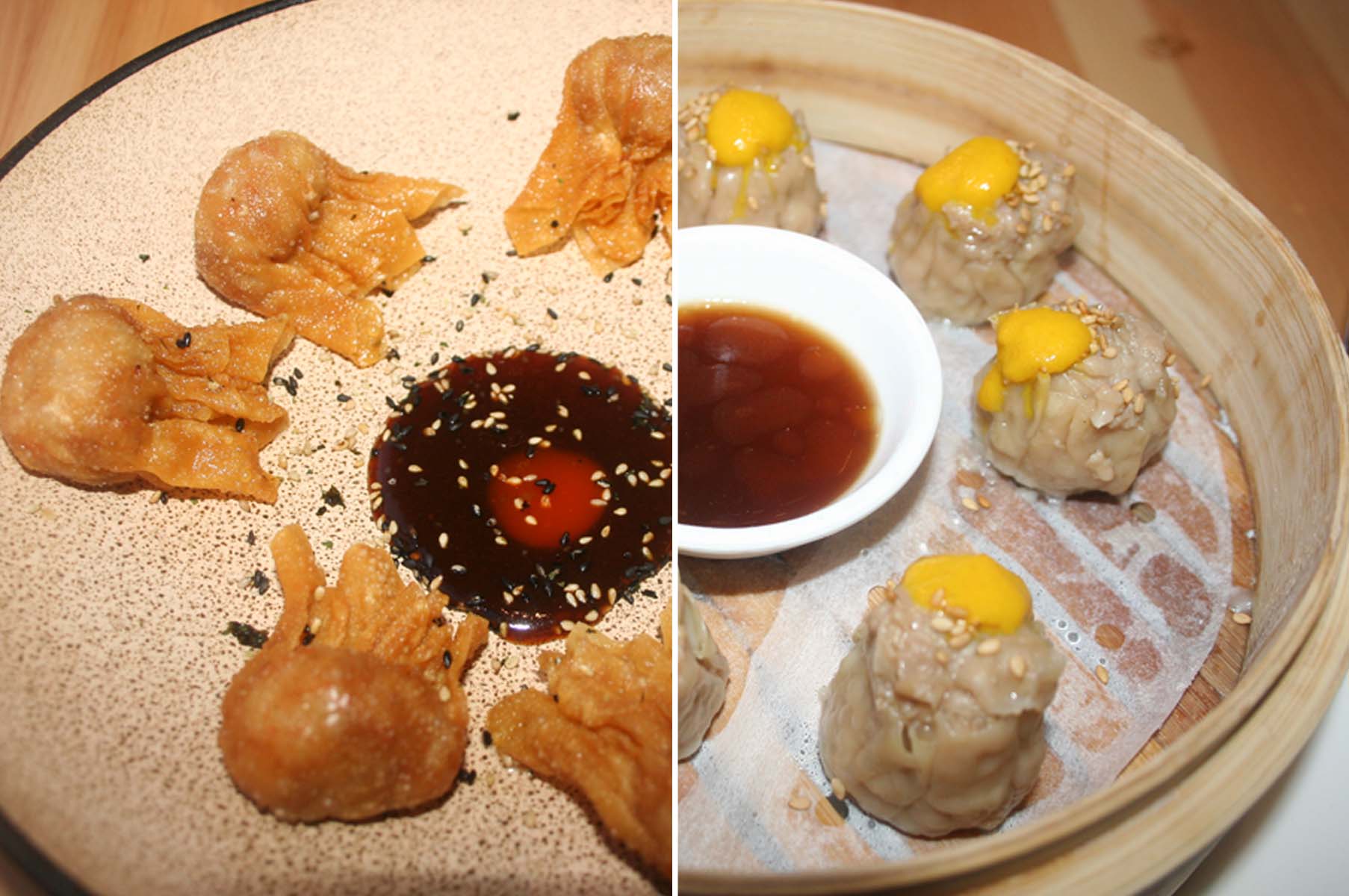 Something to note is that there is a head chef, a Chaifa chef, a Nikkei chef and a Peru chef, so dishes come out of the three separate kitchen areas as they are ready. Everyone will not get their food at the same time.

For our dinner, my guest and I split our server’s recommendation of two to three dishes, ordering five to shave between us. We started with dim sum. We ordered the fried kam lu wantán, a fried shrimp-pork dumpling with a hoisin-tamarind sauce and furikake ($10), and pollo siu mai, a steamed dumpling with chicken, cloud ear mushroom, garlic, ají amarillo and sesame seeds with a black vinegar-chicha de jora sauce ($11). While both were tasty, I preferred the friend dumplings better. When dipped in the tamarind sauce, you got the Chinese influence. But, both orders came with only seven tiny dumplings. General manager Mayu Horie stopped by our table and raved about our choice of the kam lu wantán, describing them as one of her favorites, something she could sit and eat a whole bowl of, popping them into her mouth instead of popcorn as she watched a movie curled up on her couch. So be warned, these are more of a single-bite snack that you pop in your mouth rather than a Chinese dumpling.

As we moved on, my guest’s plate from the Peruvian to the Bone section of the menu arrived first. He had ordered the sudado de pescado, slow-poached red snapper in papillote, tomato, potato, red pepper and cilantro with marigolds with white rice on the side ($17). The presentation was excellent in the pouched it was poached in and opened by the food runner at the table releasing a big cloud of steam and its aroma. But under the flowers and veggies was a tiny piece of snapper. My guest, who usually doesn’t finish his meal and takes home leftovers, remarked that even he might be hungry after eating this meal. 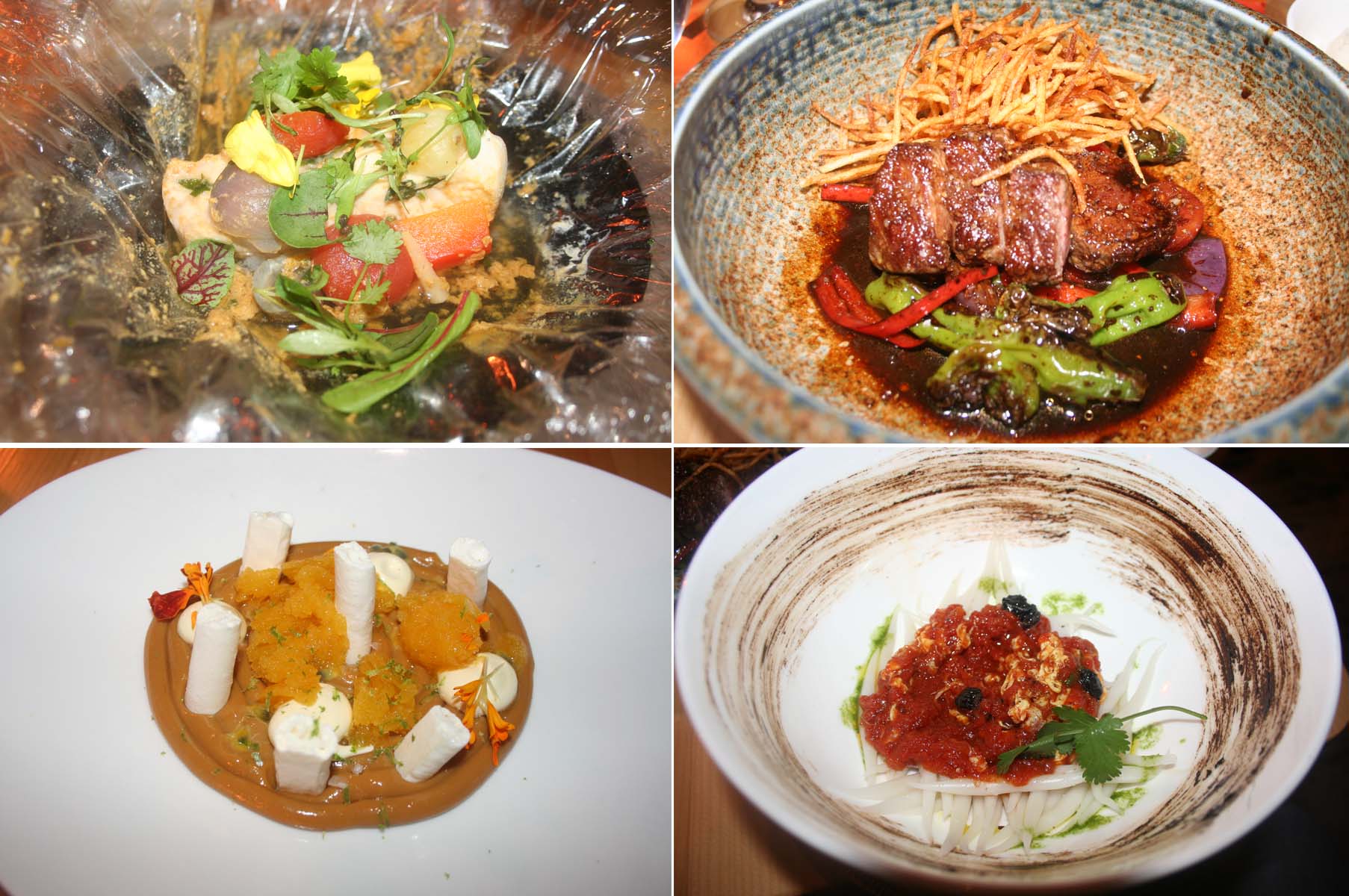 Then came my lomo saltado from The Chinese Connection section. It was four small coins of marinated coulotte steak, tomato, soy sauce, shishito peppers, ginger and shoestring potatoes with white rice on the side ($19). I’m a big fan of the lomo saltado at Lauriol Plaza on 18th Street NW full or steak, tomatoes, peppers, onions and French fries. Instead, I got four tiny pieces of steak, a lot of shishito peppers and what the menu called shoestring potatoes were more like the potato stix I used to carry in my lunchbox in elementary school. The flavor of the few bites on my plate was good, but I would have eaten twice as much and would have preferred French fries over the potato stix.

Our last dish was the tallarín zhen fe ($12) delivered by Horie who explained the dish was Hong Kong-style rice flour noodles made by the chef in house with cilantro, tomato stew, black garlic, egg and Chinese five spice. This was by far the best dish of night. I would have been happy ordering two or three plates of this for my entire meal.

For dessert, we ordered the suspiro limeña ($8), which the menu claims is the iconic dish of Peru. It was delicious with a base of creamy, sweetened condensed milk custard — that tasted like caramel — topped with both soft and crunchy meringue and tart passion fruit ice that cur the richness and sweetness of the other ingredients.

The beverage program features a full bar with one of the largest selections of Pisco in the DMV, and a curated wine list with almost 50 bottles highlighting South American varietals with a few European options. The beer selection includes classics such as Nuevo Mundo, Cumbres, and Cuzqueña. The cocktail menu focuses on Peruvian spirits with global inspiration; ranging from the traditional Pisco Sour and Chilcano, to more adventurous sips such as the Déjame Querete made with pisco, persimmon, cinnamon, lemon, Cholotini; the Macchu Pisco with prickly pear, passion fruit and lemon; or the Pisco Alejandro with cinnamon-star anise macerado, soy milk, honey and vanilla.

While the food was tasty for the most part, a few hours after dinner I was hungry again and pulled into a Burger King as I drove past for a late-night snack.