The Chicago-based Old Town Pour House is the newest addition to the blossoming Downtown Crown development at 212 Ellington Blvd., Gaithersburg. The beer-centric restaurant is Bottleneck Management’s first outside of the Chicago area. 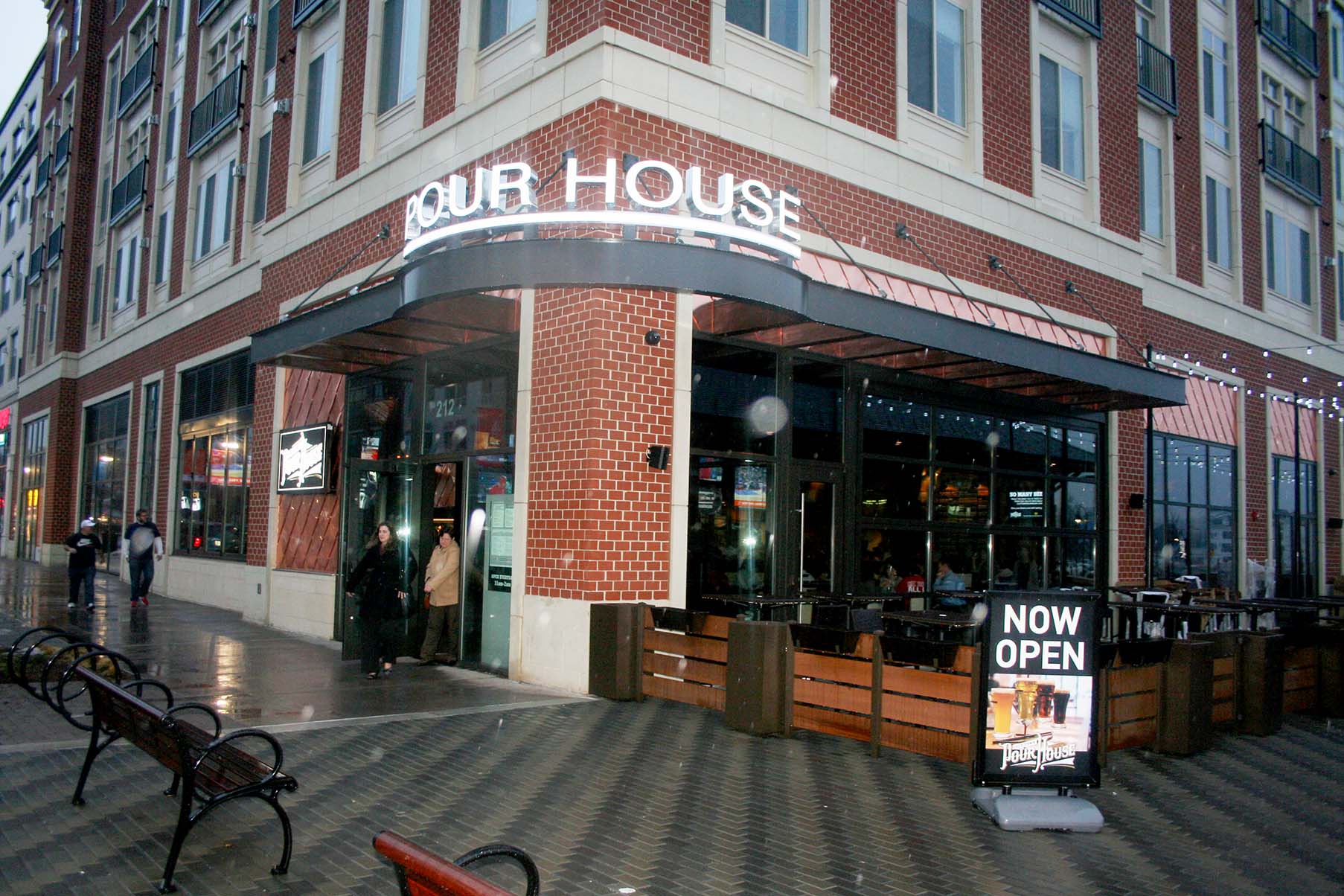 The gastropub is huge with 7,966 square feet and 1,511 square-foot outdoor patio. The interior has custom milled dark woodwork, high ceilings, copper-inlayed bars and tables, stone walls, windows that open onto the patio and a fleet of flat screens above the bar including three 110-inch “video walls” made from four 55-inch TVs. The restaurant seats 172 and another 92 on the seasonal patio. 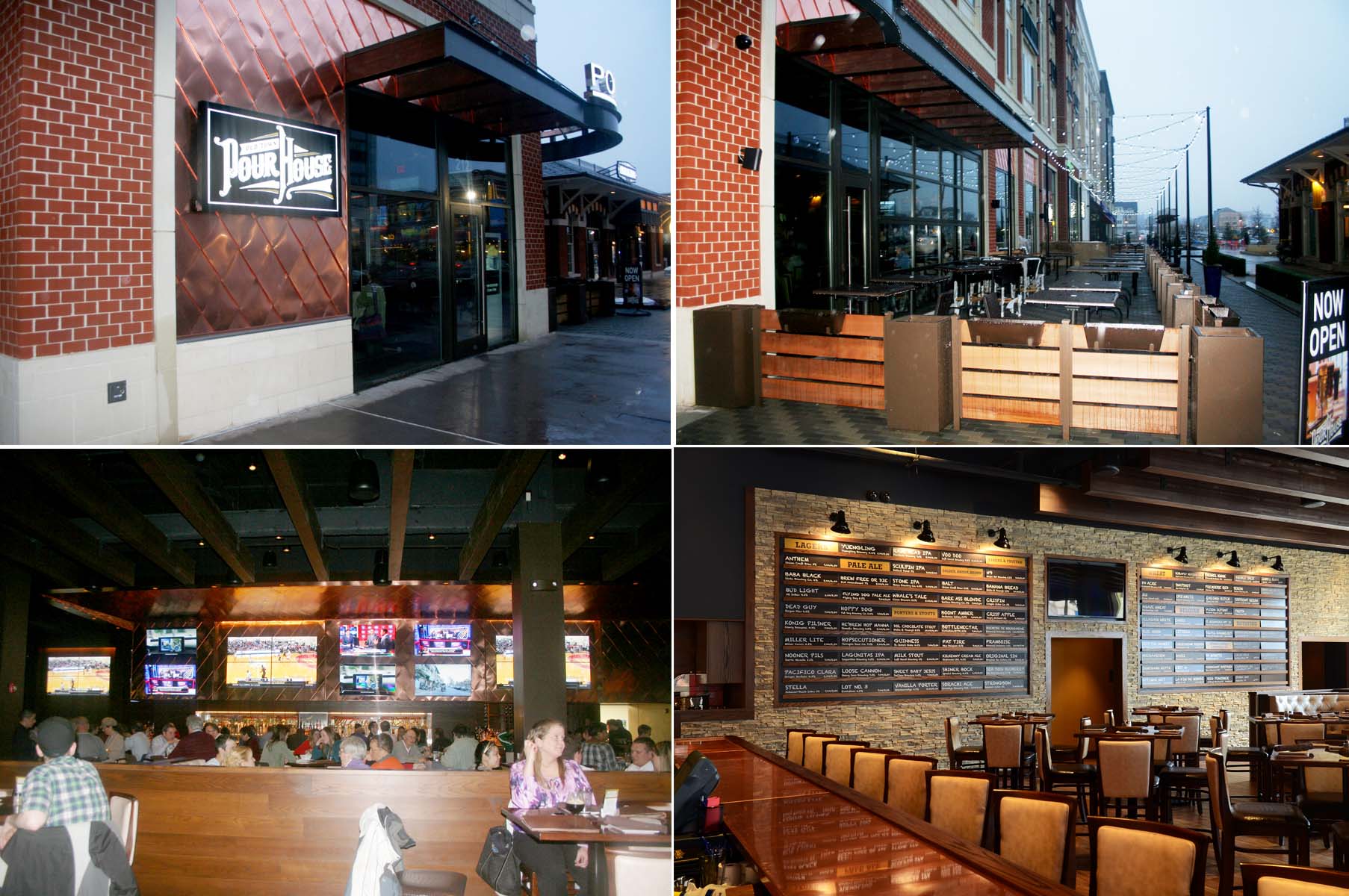 During a recent visit, the place was packed, even on a cold, rainy night. With 90 beers flowing from 120 draft handles, there’s something for everyone from wheats, lagers, goldens, ambers, browns and British to sweet, Belgian, stouts, IPAs and pale ales. General manager Daniel Guitierrez said there are 76 regional, national and international beers that will be regulars on the menu and another 14 that will only be offered for a limited time. There’s also 11 cocktails and eight wines on the menu.

The walk-in keg room at Old Town Pour House is as big as some bedrooms in city apartments. With three rows of kegs, the room has windows looking out on the massive bar between the tap lines. Beer enthusiasts can browse and rate the beers online . 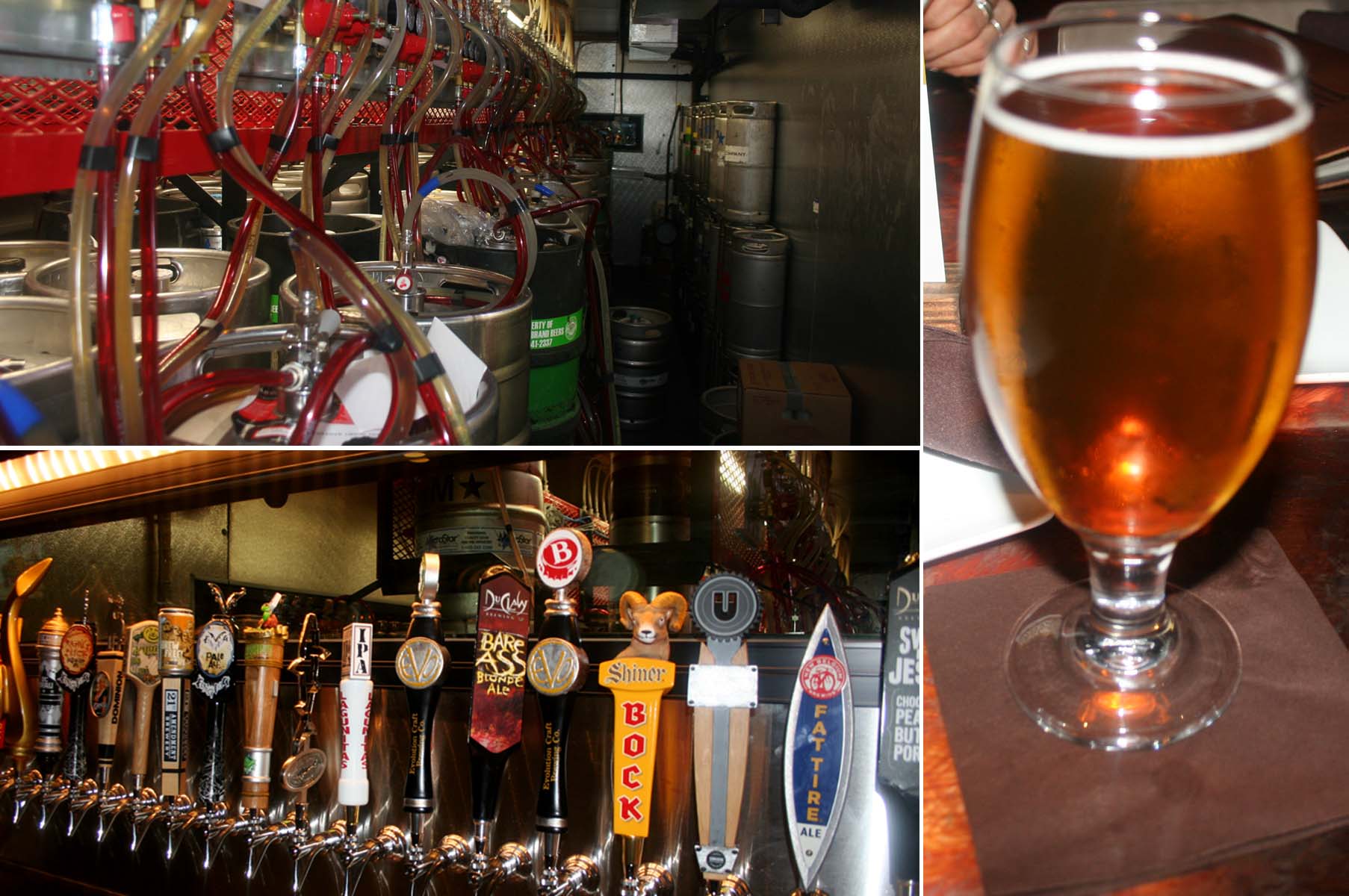 I decided to try new beers and first ordered Wells & Youngs’ Banana Bread beer on the recommendation of my server, only to learn it was out and refills wouldn’t be in until later in the week because of the last snow storm. So I decided to sample Sea Dog Brewing Co.’s Sea Dog Blueberry Wheat Ale, which was my favorite of the evening. It had a nutty quench of a wheat ale with a subtle blueberry taste from the wild Maine blueberries. I also tried the Magic Hat Brewing Co. #9, which was a deep bronze made with apricots, honey and malts. However, the apricots weren’t really discernable. 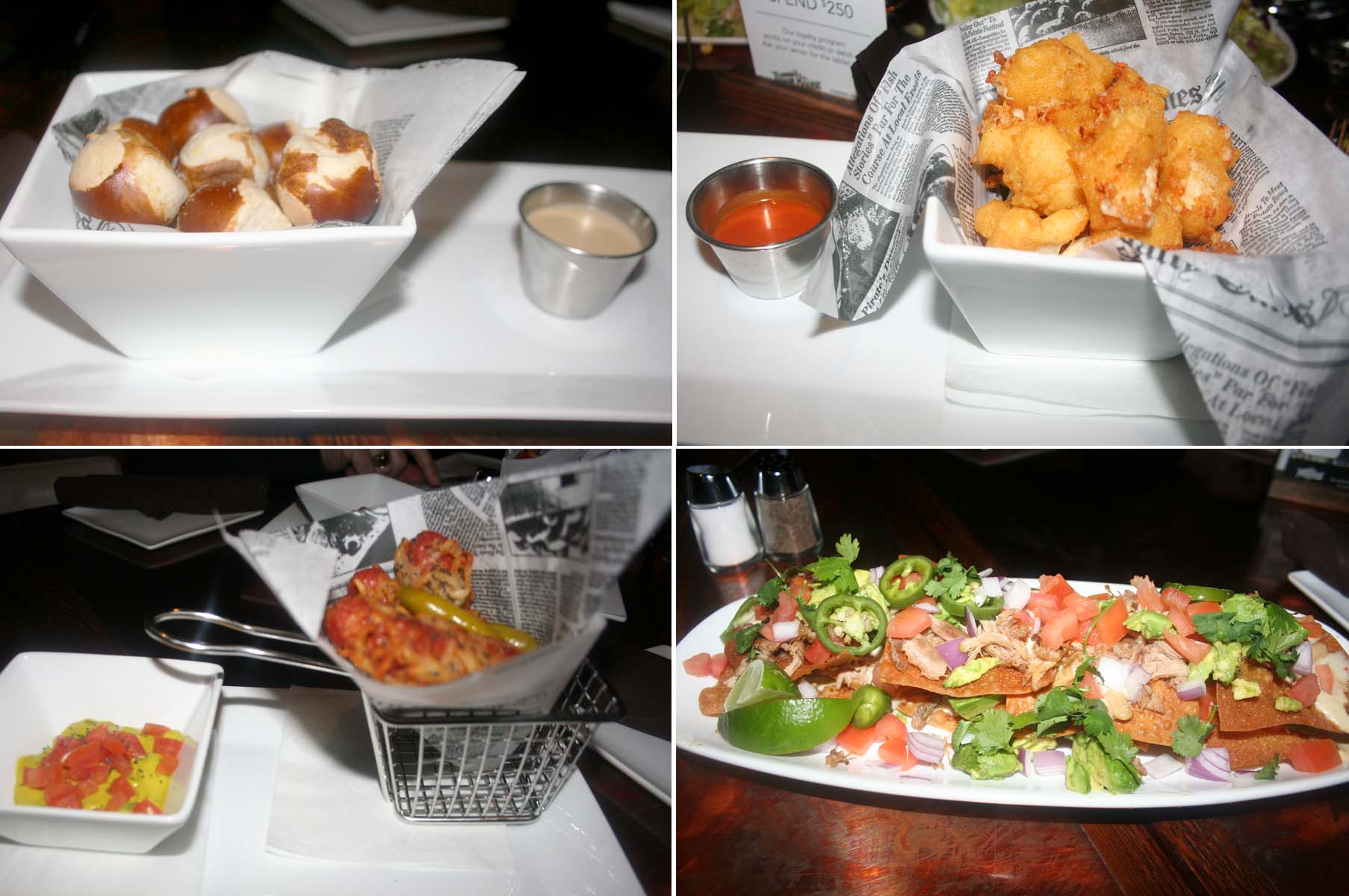 Entrée salads include the Pour House Chopped with grilled chicken, romaine, cucumbers, feta, cherry tomatoes, red onion, Kalamata olives, feta with a vinaigrette. However, except for the olives and feta, it was bland and needed a different dressing to bring out the flavor of the romaine and other ingredients. Instead, I preferred the BBQ chicken salad served with mixed greens, smoky BBQ chicken, black beans, roasted corn, jicama, buttermilk onion strings and ranch dressing. Soups, starter salads and entrée salads range from $6-$18. 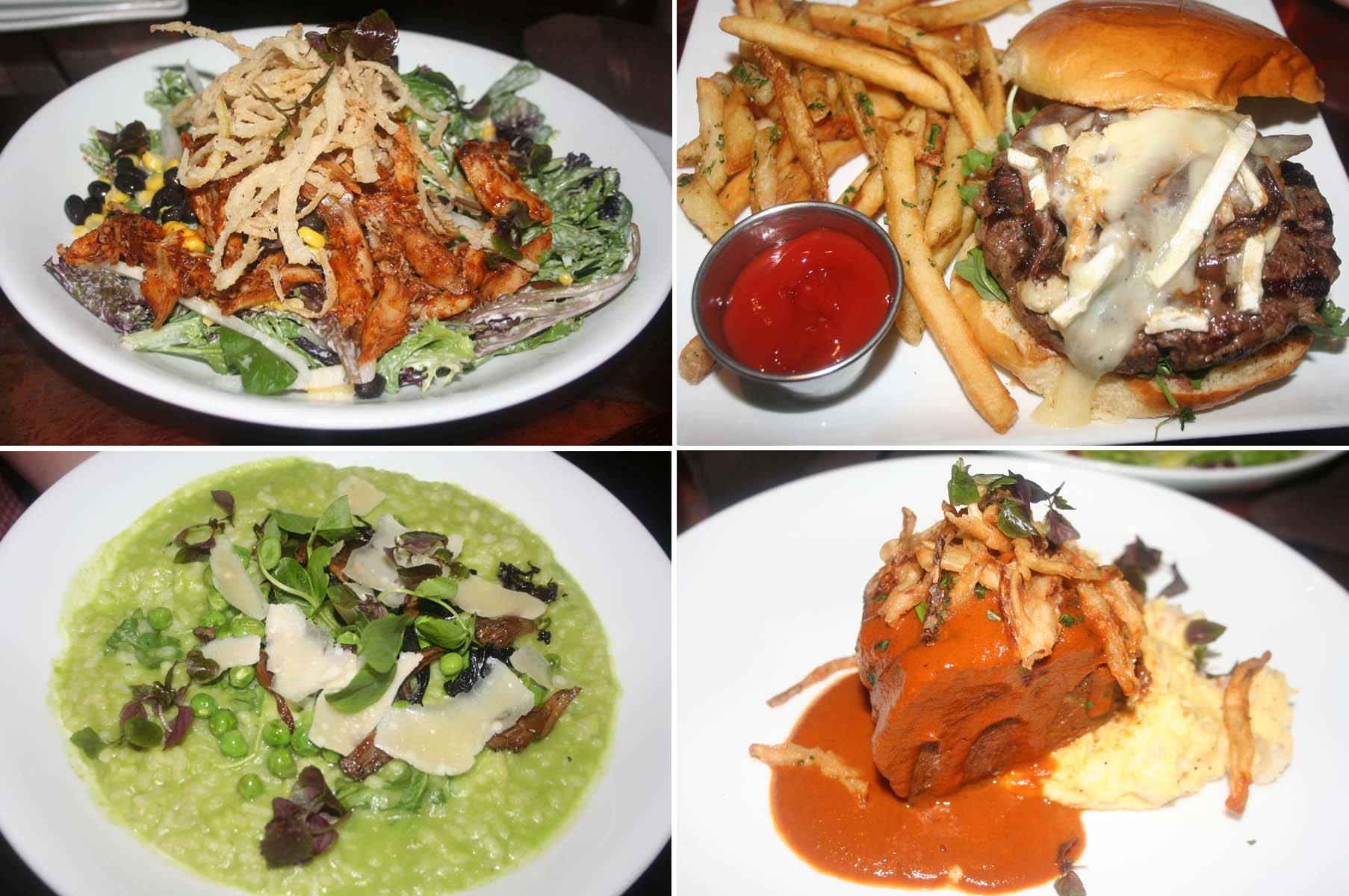 Old Town Pour House has a large selection of handhelds from BBQ pulled pork to burgers made with Wagyu beef, braised short rib, brie, Worcestershire onions and baby arugula on a brioche bun. Other entrée selections include meatloaf with peas, carrots, Yukon Gold mashed potatoes and red eye gravy; grilled rainbow trout with farro succotash, sweet corn, fava beans, roasted cippolini onions, squash, romanesco topped with arugula pesto; and a vegetarian pea risotto with seasonal wild mushrooms, shaved parmigiana-reggiano, baby arugla and brown butter. But by far the best dish I had all night was the short rib. The braised, boneless short rib was succulent, tender and flavorful served with a bacon tomato jam and crispy pickled fennel. And the shrimp grits were delicious. Sandwiches and burgers range from $12-$18 and entrees range from $17-$24. Desserts which range from $6-$8 includes a warm chocolate chip cookie topped with vanilla ice cream and chocolate sauce.