Do Parents Overshare on Social Media?

Some of social media’s greatest stars aren’t even old enough to tweet: Pictures of kids playing dress up, having meltdowns and even in the bathtub adorn Facebook walls. Diaper-donning toddlers dancing to the likes of Beyonce and Taylor Swift rack up YouTube views. Countless blogs share stories about everything from potty training to preschool struggles. 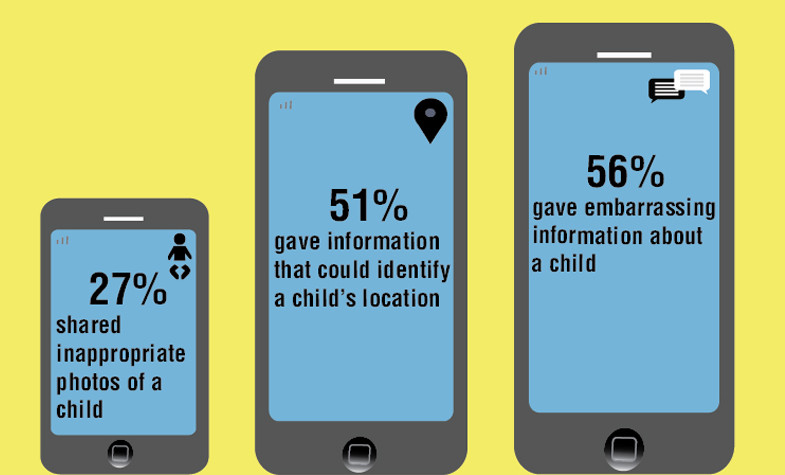 74 percent of parents feel another parent shared too much on social media. (Graphic: University of Michigan Health System)

A University of Michigan poll on children’s health finds that this so-called “sharenting” isn’t going anywhere anytime soon, with more than half of mothers and one-third of fathers discussing child health and parenting on social media and nearly three quarters of parents saying social media makes them feel less alone.

But how far is too far when it comes to crossing the boundaries between public and private life?

“By the time children are old enough to use social media themselves many already have a digital identity created for them by their parents,” says Sarah J. Clark, associate director of the University of Michigan C.S. Mott Children’s Hospital National Poll on Children’s Health and associate research scientist in the U-M Department of Pediatrics.

“Sharing the joys and challenges of parenthood and documenting children’s lives publicly has become a social norm so we wanted to better understand the benefits and cons of these experiences. On one hand, social media offers today’s parents an outlet they find incredibly useful. On the other hand, some are concerned that oversharing may pose safety and privacy risks for their children,” Clark said.

When sharing parenting advice on social media, common topics included getting kids to sleep (28 percent), nutrition and eating tips (26 percent), discipline (19 percent), daycare/preschool (17 percent) and behavior problems (13 percent), according to the November/December Mott poll that surveyed a national sample of parents of children aged 0-4. Nearly 70 percent of parents said they use social media to get advice from other more experienced parents and 62 percent said it helped them worry less.

“These networks bring parents together in ways that weren’t possible before, allowing them to commiserate, trade tips and advice, share pride for milestones and reassure one another that they’re not alone,” Clark said. “However, there’s potential for the line between sharing and oversharing to get blurred. Parents may share information that their child finds embarrassing or too personal when they’re older but once it’s out there, it’s hard to undo. The child won’t have much control over where it ends up or who sees it.”

Three-quarters of parents polled also pointed to “oversharenting” by another parent, including parents who shared embarrassing stories, gave information that could identify a child’s location or posted photos perceived as inappropriate.

Stories of sharenting gone wrong have been rampant in the news, with one of the most extreme examples including a phenomenon called “digital kidnapping” reported on earlier this year. Parents were shocked to learn that strangers were “stealing” their kids’ online photos and re-sharing them as if the children were their own.

In other cases, children’s photos have become the target of cruel jokes and cyberbullying. Among the most notorious cases in recent years was that of a Facebook group that made fun of “ugly” babies.

“Parents are responsible for their child’s privacy and need to be thoughtful about how much they share on social media so they can enjoy the benefits of camaraderie but also protect their children’s privacy today and in the future,” Clark said.

Article by the University of Michigan Health System