Pretzels and Dinosaurs Invade the DMV

While the temperatures are expected to warm up over the weekend, Sunday could be a rainy day. But there are plenty of indoor events this weekend to keep you and your family occupied. 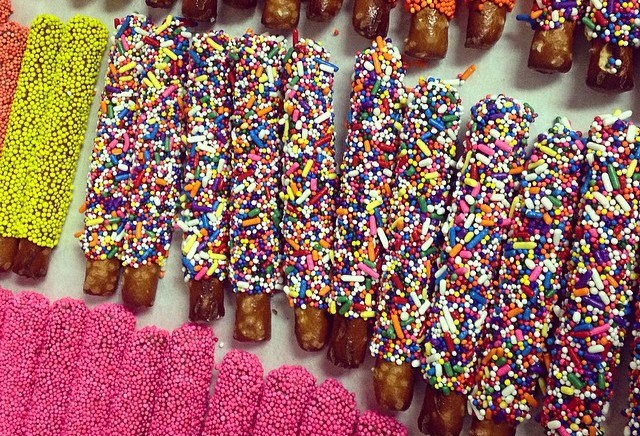 Fatty Sundays will be selling specialty dipped pretzels this weekend and next at Union Market. (Photo: Fatty Sundays)

Chocolate covered pretzels are objectively delicious, so you should head to Union Market and check out Brooklyn’s Fatty Sundays, which is hosting a pop-up shop for the next two weekends. Expect a bold selection of salty-sweet concoctions, with flavors like peanut brittle, salty toffee and strawberry licorice. As an added bonus, there will also be daily DIY workshops on dipping and topping pretzels. 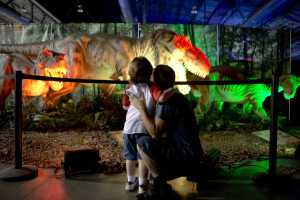 Experience up to 40 moving and replica museum-quality dinosaurs at Discover the Dinosaurs. Discover the Dinosaurs is for the entire family, especially kids, to explore the mystery of pre-historic life in an environment of learning, discovery and fun. It gives visitors the opportunity to actually get close and touch the dinosaurs! Beyond the exhibit, additional fun activities are available for kids of all ages, which make spending the day with the dinosaurs a great experience for the entire family. At companion show Discover the Ice Age, prehistoric Earth comes alive. See a world transformed by snow and ice. Where gigantic creatures reigned after the dinosaurs disappeared. Experience the massive moving, breathing, animatronic mammals of the Ice Age in the natural environment. 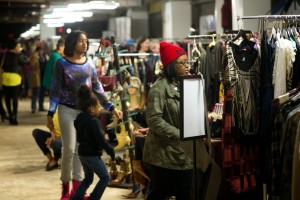 The biggest runway and pop up shop event is back. Crystal Couture show and sale unites 40 of the DMV’s most stylish boutiques, designers and fashion retailers. Shop discounted merchandise both on the rack and on the runway as models showcase select offerings at this 360-degree immersive shopping experience. Indulge in sips from the bar and tastes from local restaurants, complimentary mini beauty makeovers, meet fashion consultants and enjoy music from DJ Neekola. 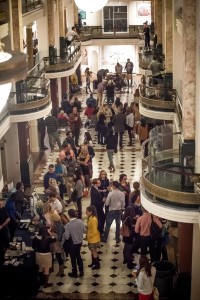 Listen to music and tour the exhibits at Luce Unplugged. (Photo: Smithsonian Museum of American Art)

Indie-rocker Art Sorority for Girls and R&B group lowercase letters, two local music scene standouts, will perform sets for Luce Unplugged on the first floor of the Smithsonian American Art Museum’s Luce Center. Luce Unplugged is a monthly concert series that pairs live, acoustic music by D.C.-area musicians with works in the museum’s collection. Each concert features an “opening act”—a staff-led talk on an artwork selected by the featured group, after which the headliner performs an hour-long set. Libations and small snacks will be available for purchase from a cash bar, and Port City Brewing Company will provide free samples. 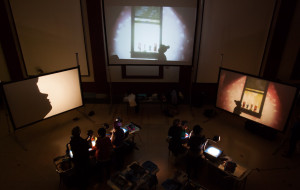 Shadows cast on a screen by the theater troupe Manual Cinema will tell the story of Lula del Ray. Lula del Ray is a mythic reinvention of the classic coming-of-age story. Told almost entirely without dialogue, Lula del Ray tells the tale of a lonely adolescent girl who lives with her mother in a mid-century American Southwest setting. After a chance encounter over the radio, Lula becomes obsessed with the country music duo the Baden Brothers. Inspired by their music, she runs away from home and encounters a world of danger, deception, and disappointment along the way. The production features an original score inspired by the music of Hank Williams, Roy Orbison and Patsy Cline. There’s no dialogue, just four musicians performing the score and triggering sound effects. Four puppeteers man a trio of overhead projectors, manipulating 200-plus paper puppets to create cinematic sequences and sometimes casting the shadows themselves, performing below the screen, their silhouettes projected above. 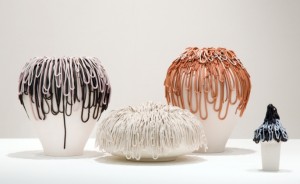 Taking the word artisanal back from the like of Second State’s ice cubes and overpriced cupcakes, Cutting-Edge Spanish Crafts celebrates the work of some of the most innovative artisans coming out of the land of 10 p.m. dinners. Showcasing 90 handmade items – including lamps, candles, purses, jewelry and glassware – the exhibition at the Former Residence of the Ambassadors of Spain draws attention to the resilience of craftsmanship in the face of the 2007-08 global financial crisis and its lasting effects. A recent boom in new craft enterprises in Spain is “more than a fad.” Among the crafts on display are Hilo vases by Marre Moerel, reticulum shawls by Teixidors textile cooperative craftsmen, tiles made by Ceramica Cumella for the façade of the Villa Nurbs, designed by architect Enric Ruiz-Geli and hand-painted by artist Frederic Amat, and the Lola shoe by Vialis.

Through Mar. 29 from noon-7 p.m. Thursday through Sunday at the Former Residence of the Ambassadors of Spain, 2801 16th St. NW. By appointment Monday through Wednesday. Admission is FREE! 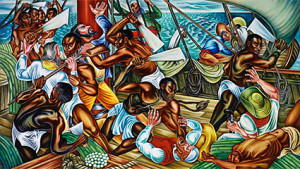 The Smithsonian’s Museum of American History will celebrate Black History Month with a display of artwork from Hall Woodruff. (Artwork: Hall Woodruff)

Bring the whole family to the Smithsonian’s kickoff celebration of Black History Month with the Smithsonian Black History Month Family Day. Visitors can take a special family tour of the exhibitions Rising Up: Hall Woodruff’s Murals at Talladega College, take part in an art-making activity and listen to music inspired by Hall Woodruff. The day ends with a fascinating presentation of Woodruff’s genealogy by Karen Bennett Harmon, the artist’s great-niece.

Sam Okerstrom-Lang has created a unique video installation specifically for the building hosting PRAVA. His piece will manipulate light such that the viewer can immerse herself in the spectacle of reflection and refraction. (Photo: Pike & Rose)

The Pike & Rose Audio Visual Arts (PRAVA) Festival is a nighttime art event that will transform two floors of a newly constructed office tower into an immersive spectacle of light, sound and projection. PRAVA features performances and site specific installations by artists convened from Washington D.C., Baltimore, New York, Boston and the Netherlands, creating a multi-sensory environment to explore and experience. The event features Baltimore’s Charm City Roller Girl’s choreographed to electronic music, a sound-reactive light show, a video that shows an elaborate Baroque sculpture exploding in slow motion and other art installations and electronic music. 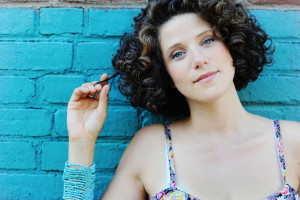 Cyrille Aimée performs at the Mansion at Strathmore. (Photo: Strathmore)

Winner of the Montreux Jazz Festival’s International Vocal Competition, the Sarah Vaughan International Jazz Vocal Competition and a finalist in the Thelonious Monk Vocal Competition, French/Dominican vocalist Cyrille Aimée is “one of the most promising jazz singers of her generation,” according to The Wall Street Journal. Aimée carries the torch of famed Django Reinhardt, both from Samois-sur-Seine, France. Aimée tours throughout the world, both with her band as well as in a duo setting with Brazilian guitarist Diego Figueriedo. She brings songs from her 2014 release It’s a Good Day to the Mansion.