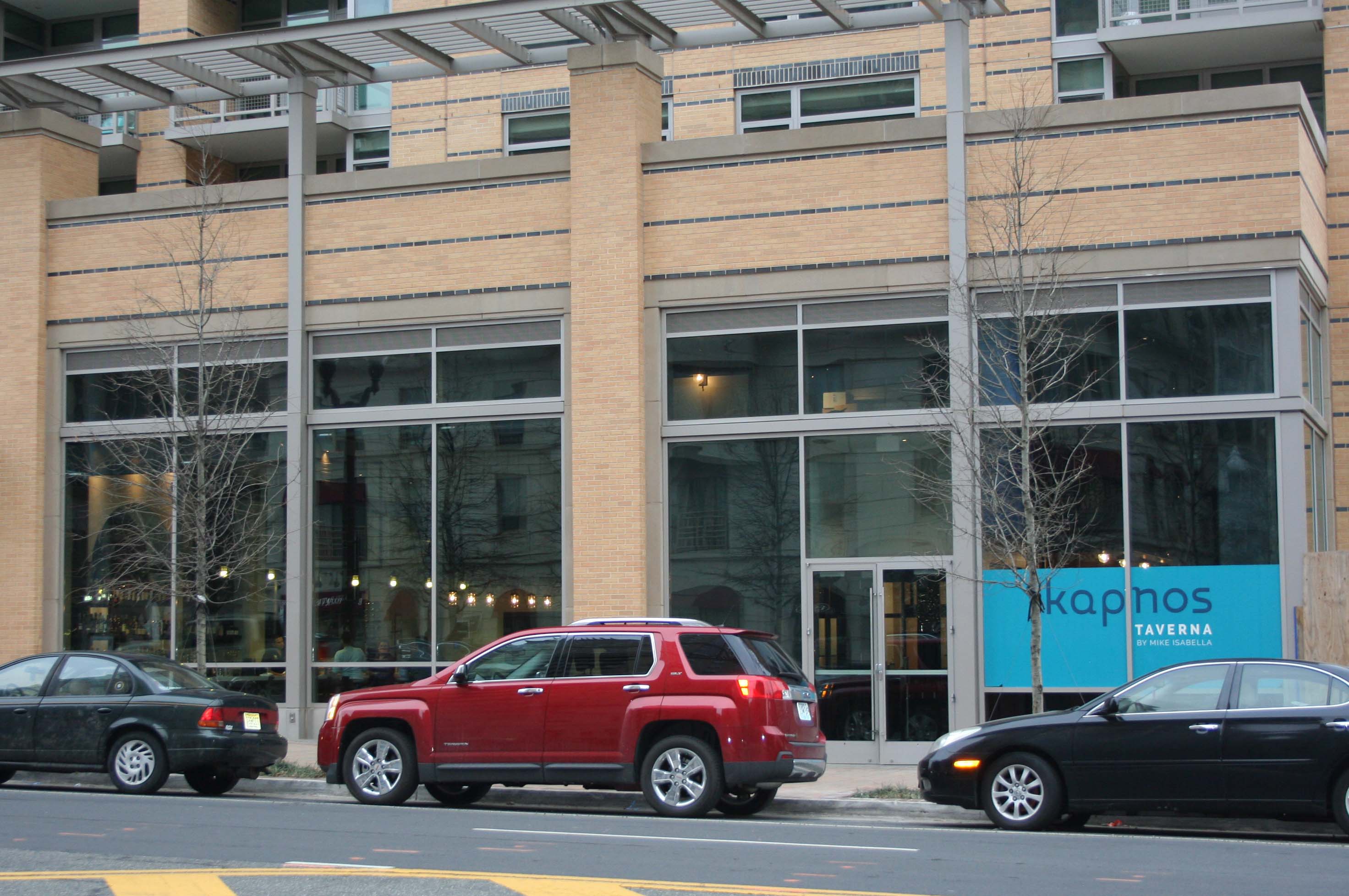 Kapnos Taverna, with a heavy seafood menu, opens Tuesday for lunch. There’s no sign yet, but it is across the street from Buzz coffee shop. (Photo: Mark Heckathorn/DC on Heels)

The 165-seat, 5,700 square foot space at 4000 Wilson Blvd. is a sister restaurant to Kapnos, Isabella’s Northern Greek restaurant that opened in 2013 on the 14th Street corridor.

Kapnos’ executive chef George Pagonis will oversee the new kitchen along with chef de cuisine Greg Basalla. At Kapnos Taverna, the menu will focus on the coastal regions and islands of Greece, including dishes from the Cyclades, Peloponnese, Thessaloniki and Ionian Islands. Pagonis, the son of Greek immigrants, drew on his experiences dining throughout the Aegean Islands near his family’s vacation home on Paros to create the restaurant’s heavy seafood menu.

“I’m proud of the ways in which we’ve made Kapnos Taverna stand apart from the original restaurant,” said Isabella. “At Kapnos we showed how much more there is to Greek cooking than lamb shank, spanakopita and moussaka, and I think people are going to see even more of the depth of the cuisine when they see and taste the menu at Kapnos Taverna.”

Isabella’s third Greek concept, Kapnos Kouzina, is slated to open this summer at 4900 Hampden Lane in the former Vapiano space in Bethesda Row. Meaning kitchen in Greek, it will focus on homestyle dishes and shareable platters of fried chicken, stewed lamb and more. It will be outfitted like a market with pantry items and wine on display, and bowls of fruits and vegetables throughout. 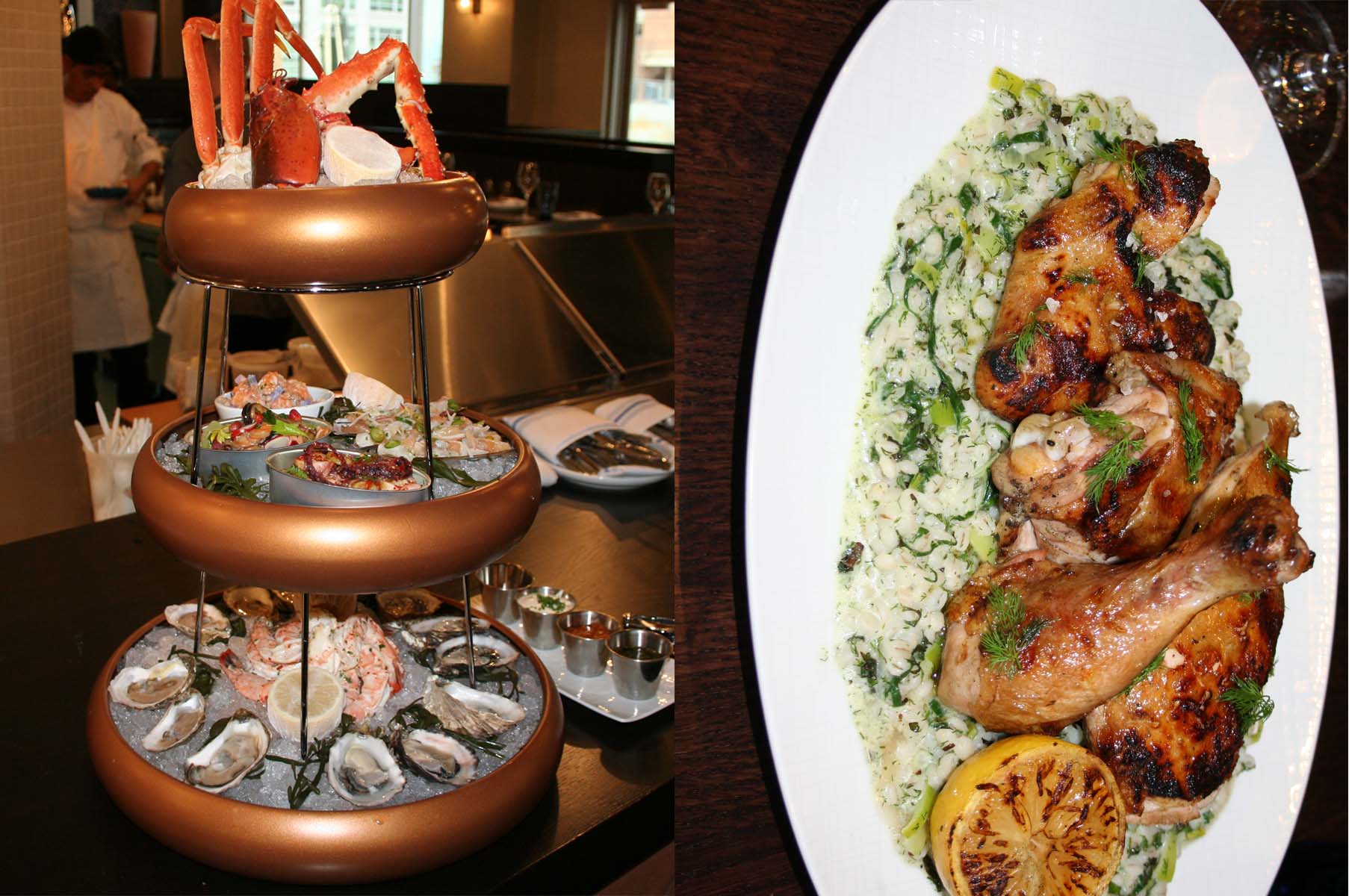 “I grew up vacationing at a family house on Paros and eating my way around the Aegean,” said Pagonis, who was kicked off Top Chef Season 12’s opening show in October because of his oyster shucking skills. He was won his way back, but was told to pack his knives again earlier this month when the judges disliked his plate that combined grilled octopus legs, a crispy croquette made out of the ground head, green apple harissa, lentils, pickled mustard seeds and a bacon chip. “To be able to bring those flavors to a wide audience in Northern Virginia where I grew up is something I’ve been dreaming about since I went to culinary school.”

An extensive list of Greek mezze includes the chefs’ takes on traditional dishes like falafel and cheese saganaki, as well as cold and garden mezze sections with spiced beets and dolmades. While about two-thirds of the menu will be different than the original Kapnos, some of its most popular dishes will such as its spreads and flatbread, and meat roasted on a wood-fired rotisserie spit, will find their way to NoVa.

The wine selection includes more than 90 bottles with at least three quarters of the list originating in Greece. Greek wines even find their way onto the taps, where a crisp, floral Moschofilero takes up one of the bar’s four draft lines. The other three are anchored by local beers, a rotating selection that includes brews from the likes of D.C.’s 3 Stars, Charlottesville-based Champion and Alexandria’s Port City. Also, the cocktail program is complete new from the D.C. location including The Papa Bear, which blends rye and amaro with cinnamon raisin-infused sweet vermouth, pimento bitters and Aleppo pepper.

The ebony-stained, distressed wood bar front has a charred wood back bar and white marble top. The dining area is highlighted by a steel framed vertical herb garden punctuated with lava rock. A dining mezzanine overlooks the open kitchen. In the spring, a 60-seat patio and fire pit will be added. 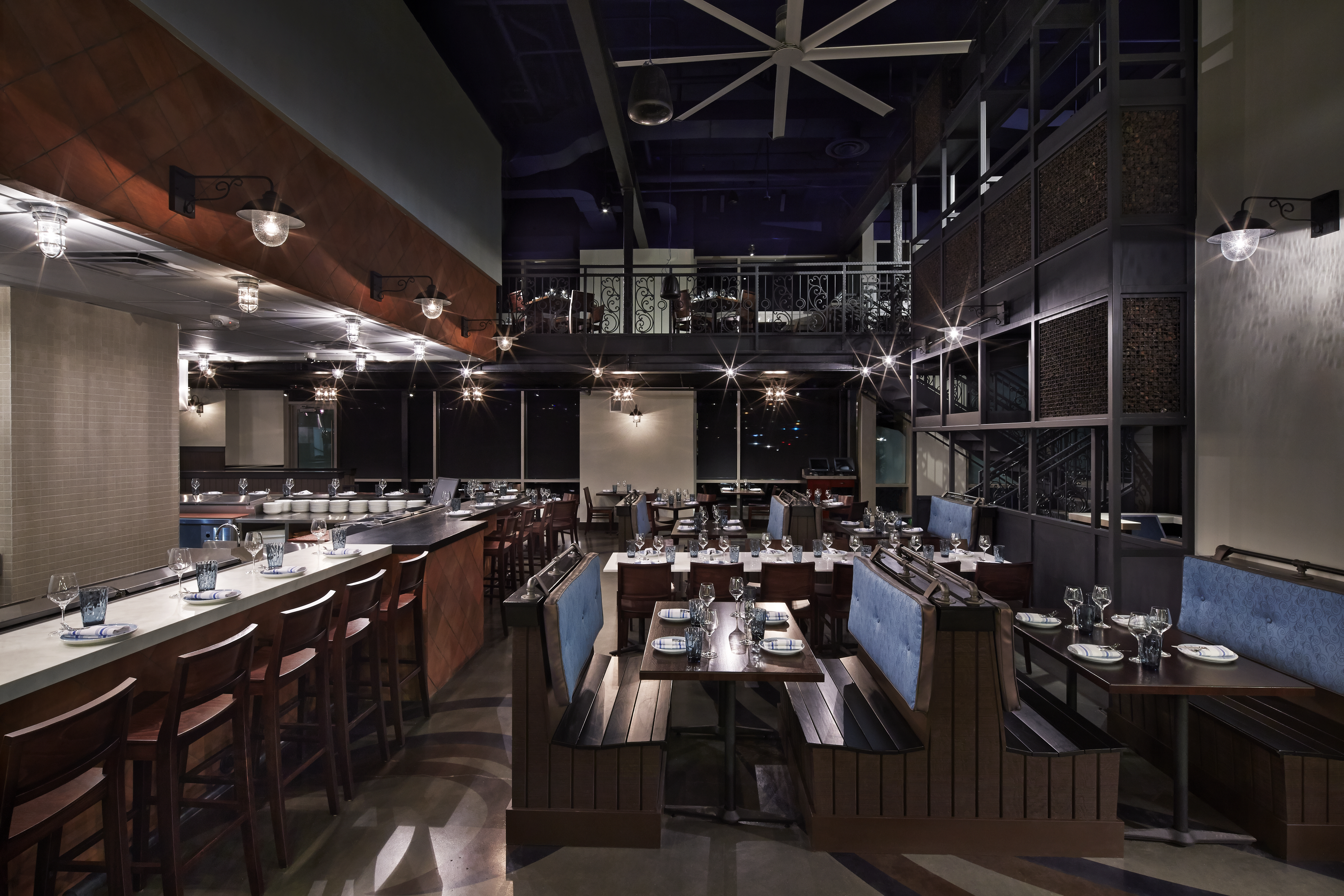 Located around the same building around the corner, Isabella’s Pepita Mexican cantina is scheduled to open in February or March. Come summer, chef Jonah Kim will open Yona, a noodle bar and Japanese small plates restaurant that Isabella is a partner in.