Warner Bros. Pictures’ The Hobbit: The Battle of the Five Armies easily led last weekend’s (Dec. 19-21) box office with $54.72 million. The third and final chapter of Peter Jackson’s The Hobbit trilogy has grossed $89.13 million through its first five days of release. On the heels of a sharper than expected percentage decline on Thursday, the film rebounded over the weekend. The five-day debut of The Battle of the Five Armies was 13 percent below the $102.05 million five-day start of 2002’s The Lord of the Rings: The Two Towers, which also opened on a Wednesday, and 3.5 percent ahead of the $86.14 million five-day start of last year’s The Hobbit: The Desolation of Smaug, which opened on a Friday. 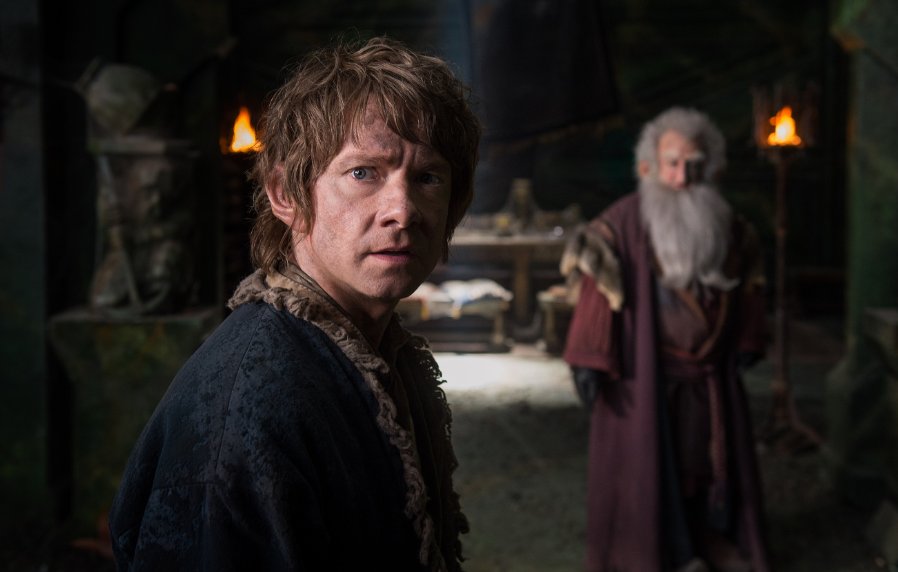 Martin Freeman and Ken Stott in The Hobbit: The Battle of the Five Armies. (Photo: Warner Bros. Pictures)

It what turned out to be a closer than expected race for second, 20th Century Fox’s Night at the Museum: Secret of the Tomb was able to outpace Sony Pictures’ Annie with an opening weekend take of $17.10 million. The two films split up the family audience last weekend and may remain close to one another throughout the rest of the holiday season. While it was able to claim second, Night at the Museum: Secret of the Tomb opened significantly below expectations. The third installment of the Ben Stiller led franchise had already been expected to see a significant drop-off from the performance of its predecessor, 2009’s Night at the Museum: Battle of the Smithsonian, which debuted with $54.17 million in its first three days.

Annie debuted in third with $15.86 million. The musical remake starring Quvenzhané Wallis, Jamie Foxx and Cameron Diaz opened towards the lower end of pre-release expectations. That is positive news for Sony, especially after the events of the past week that led to the cancellation of the studio’s release of The Interview. Annie trailed Night at the Museum: Secret of the Tomb by just $1.24 million last weekend. Like Secret of the Tomb, Annie is likely to hold up nicely throughout the holiday season, though between the two films, it will face more direct competition from Walt Disney Studio’s Into the Woods beginning Christmas Day.

Twentieth Century Fox’s Exodus: Gods and Kings landed in fourth with $8.11 million. The pricey Ridley Scott directed biblical epic starring Christian Bale was down a very sharp 66 percent from the previous weekend’s debut. Poor reviews, mixed word of mouth and direct competition from The Battle of the Five Armies are all taking a toll on the film. Exodus: Gods and Kings has grossed a lackluster $38.94 million in 10 days.

The Hunger Games: Mockingjay – Part 1 followed closely behind in fifth with $7.88 million. The third installment of Lionsgate Entertainment’s blockbuster franchise was down a solid 38 percent from the previous weekend. Mockingjay – Part 1 has grossed $289.36 million in 31 days, which leaves it just $10.64 million away from becoming the second release of 2014 to reach the $300 million domestic milestone.

In its first weekend of wide release, Fox Searchlight’s Wild took in $4.11 million to place in sixth. The critically acclaimed drama starring Reese Witherspoon has grossed $7.17 million in 19 days of release.
On the limited front, UTV’s PK was off to a very strong start with $3.57 million from 272 locations. That gave the Hindi language comedy starring Aamir Khan a per-location average of $13,108 for the frame. PK finished in ninth place among all films this weekend