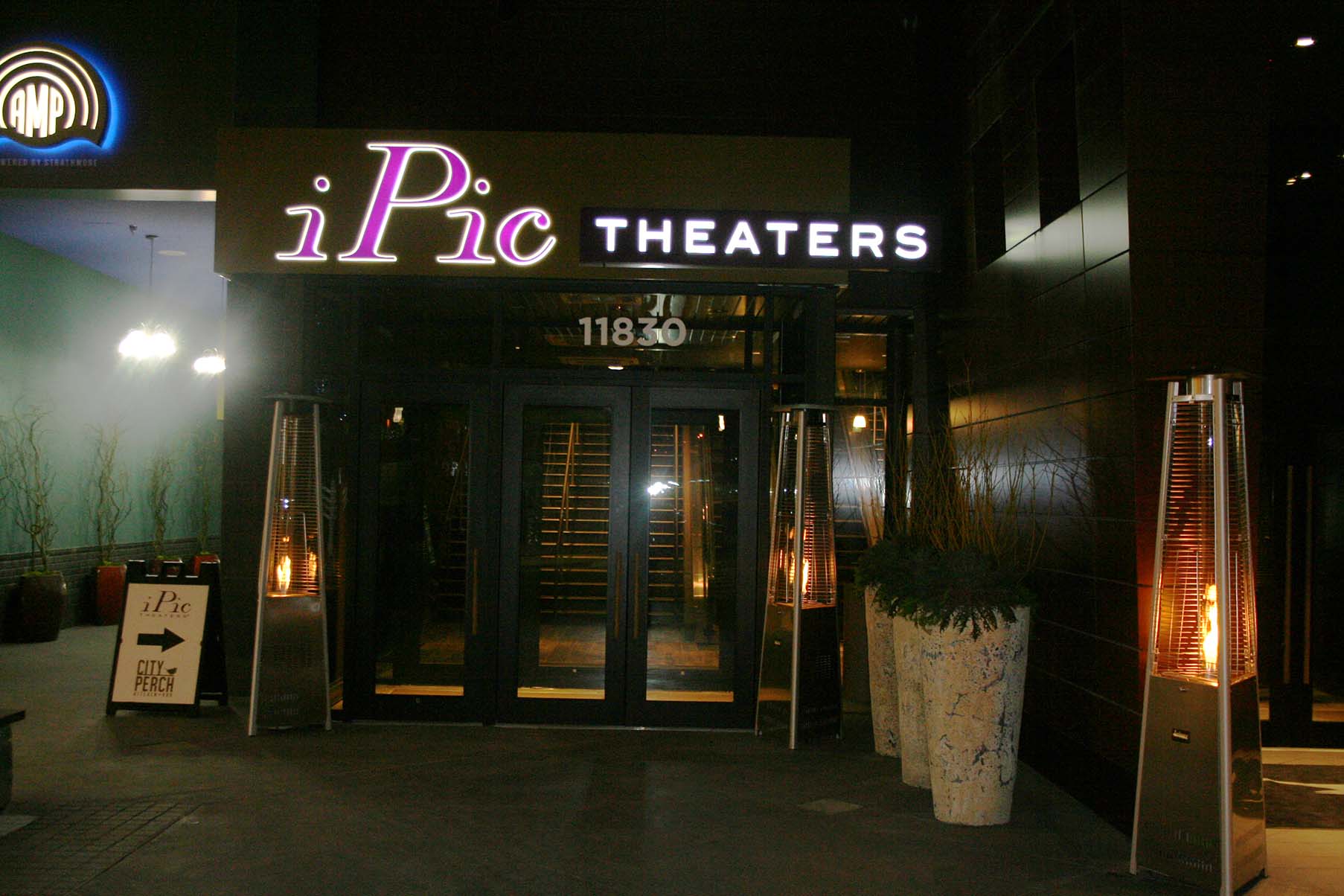 The new iPic Theater opened in the Pike & Rose Development along Rockville Pike in North Bethesda on Oct. 31.
(Photo: Mark Heckathorn/DC on Heels)

Operated by the Boca Raton, Fla.-based iPic Entertainment, the theater has eight screens and 782 seats. Each theater features premium and premium plus seating with plush leather seats. Premium plus seating includes fully reclining seats, personal pillows and blankets, free popcorn and guests can order from the theater’s “dining in the dark” menu designed by James Beard-award winning chef Sherry Yard and cocktails designed by iPic mixologist Adam Seger on iPads at each seat. The food is then delivered by servers dressed in black. Premium ticketholders can purchase their food from the iPic Express count in the lobby and take their food into the theater.

Premium tickets are $13, while premium plus seats are an additional $9 on top of the base price. 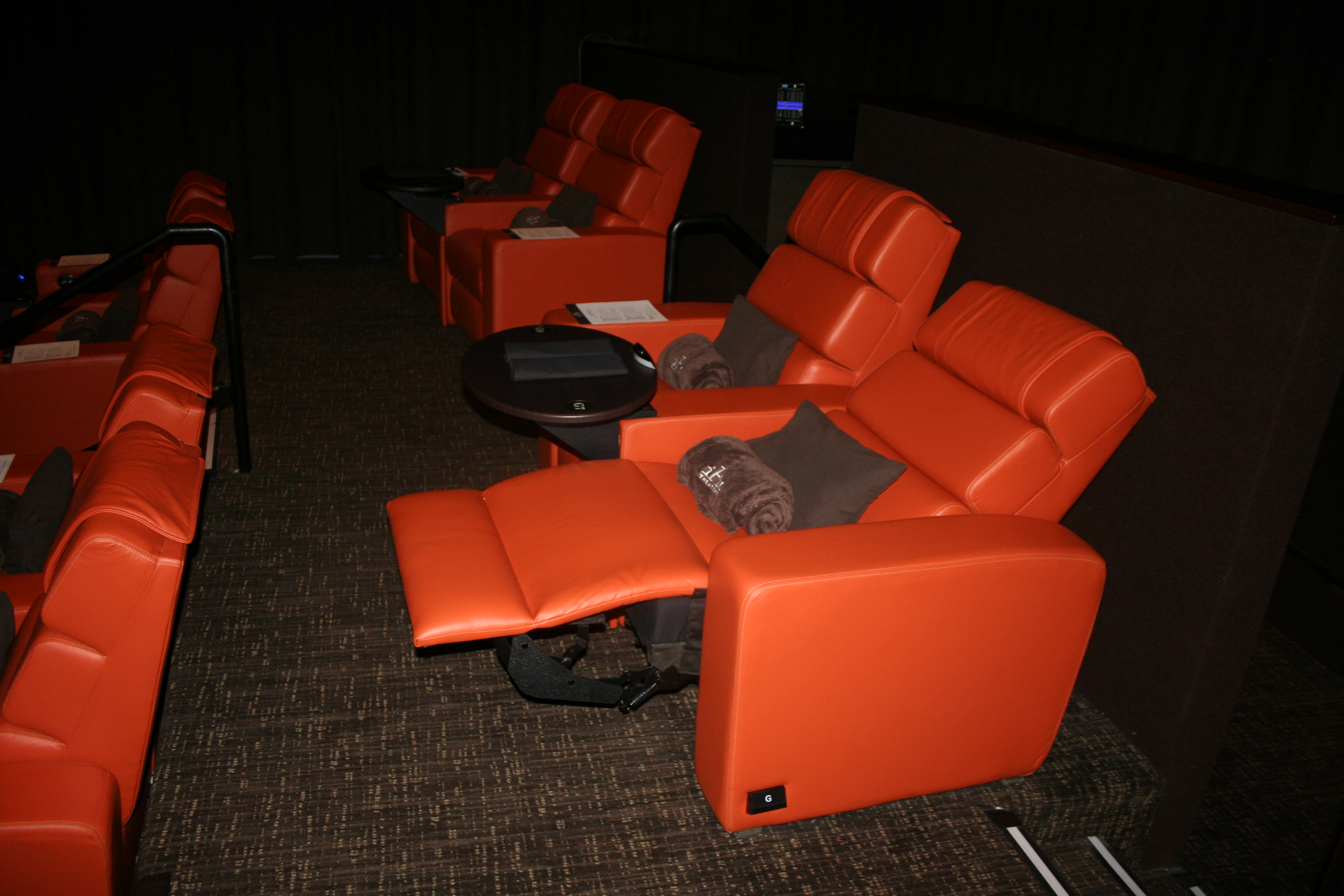 Premium Plus seats recline with a pillow and blanket at each one and iPad to order food delivered to your seat.
(Photo: Mark Heckathorn/DC on Heels)

Unfortunately, only the very front two or three rows are the $13 premium, with the better locations all filled by the $22 premium plus seating. Since the seats are assigned at purchase, you need to order early and be prepared to get a stiff neck from looking up at the screen or pay for more expensive seats. If you’re in the premium plus section, you’ll also have to give the server your credit card to pay for any purchases you may make during the film.

Dinner in the theater is pricey too and just mediocre.

iPic Express features a menu designed by Yard, who joined iPic as corporate vice president of culinary direction last April. Yard previously was pastry chef for Wolfgang Puck for 20 years. She began her culinary career at the Rainbow Room followed by stints at Drew Nieporent’s Montrachet and Tribeca Grill. She moved to California where she established herself as a pastry chef at San Francisco’s Campton Place followed by a move to Los Angeles to work with Puck including helping with the opening of his Source restaurant at the Newseum.

Menu items are conducive to in-cinema dining while a full-service bar offers an exclusive selection of handcrafted cocktails featuring local, fresh produce and herbs with house-made syrups, bitters and infusions. Seger’s creations include the Norma Jean ($19) made with strawberry vodka and from-scratch strawberry lemonade, and the Augustine Sour ($13), made with cherry house-infused bourbon, grade B maple syrup and pressed lemon. 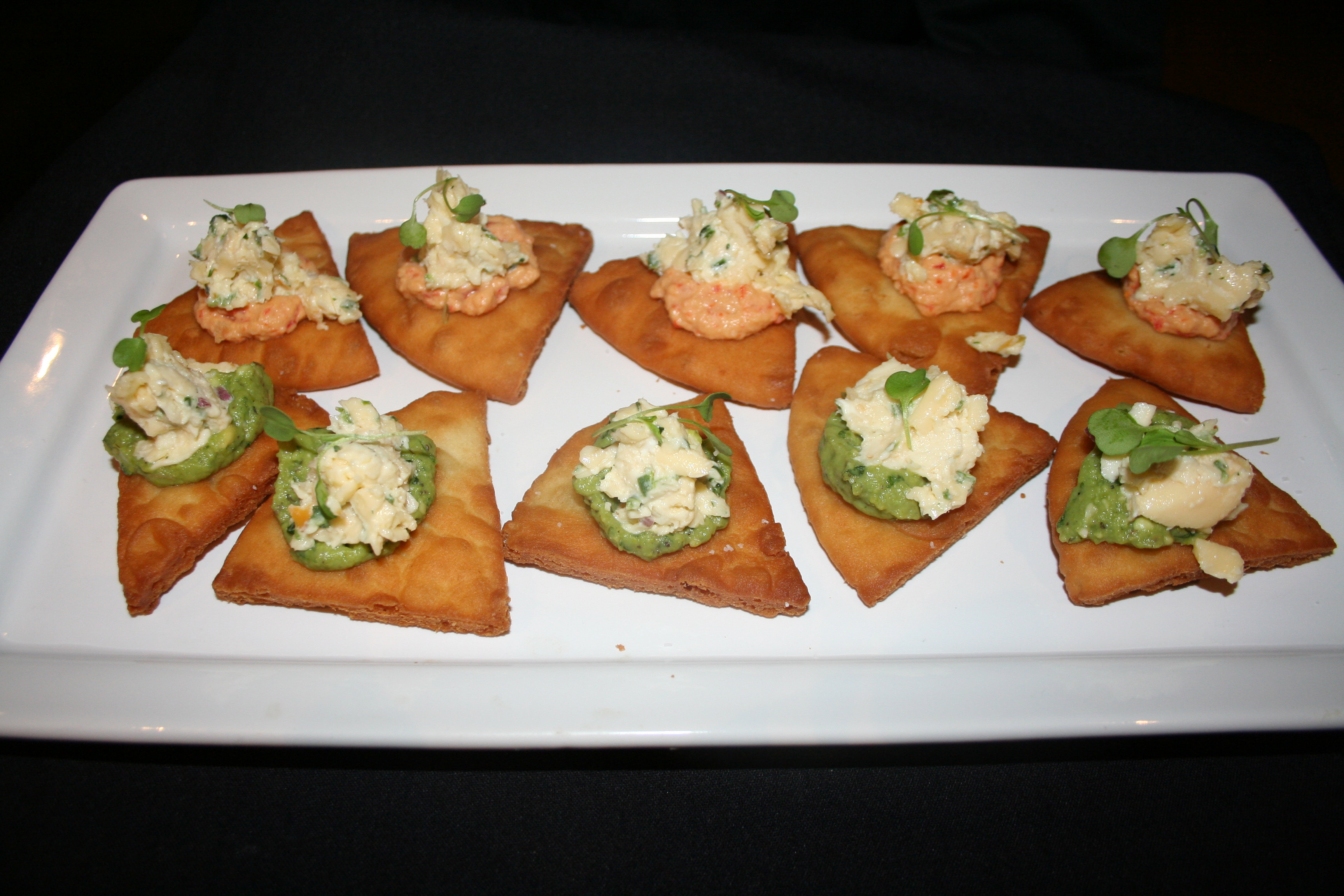 The $13 naan-chos were the best dish on the menu. (Photo: Mark Heckathorn/DC on Heels) 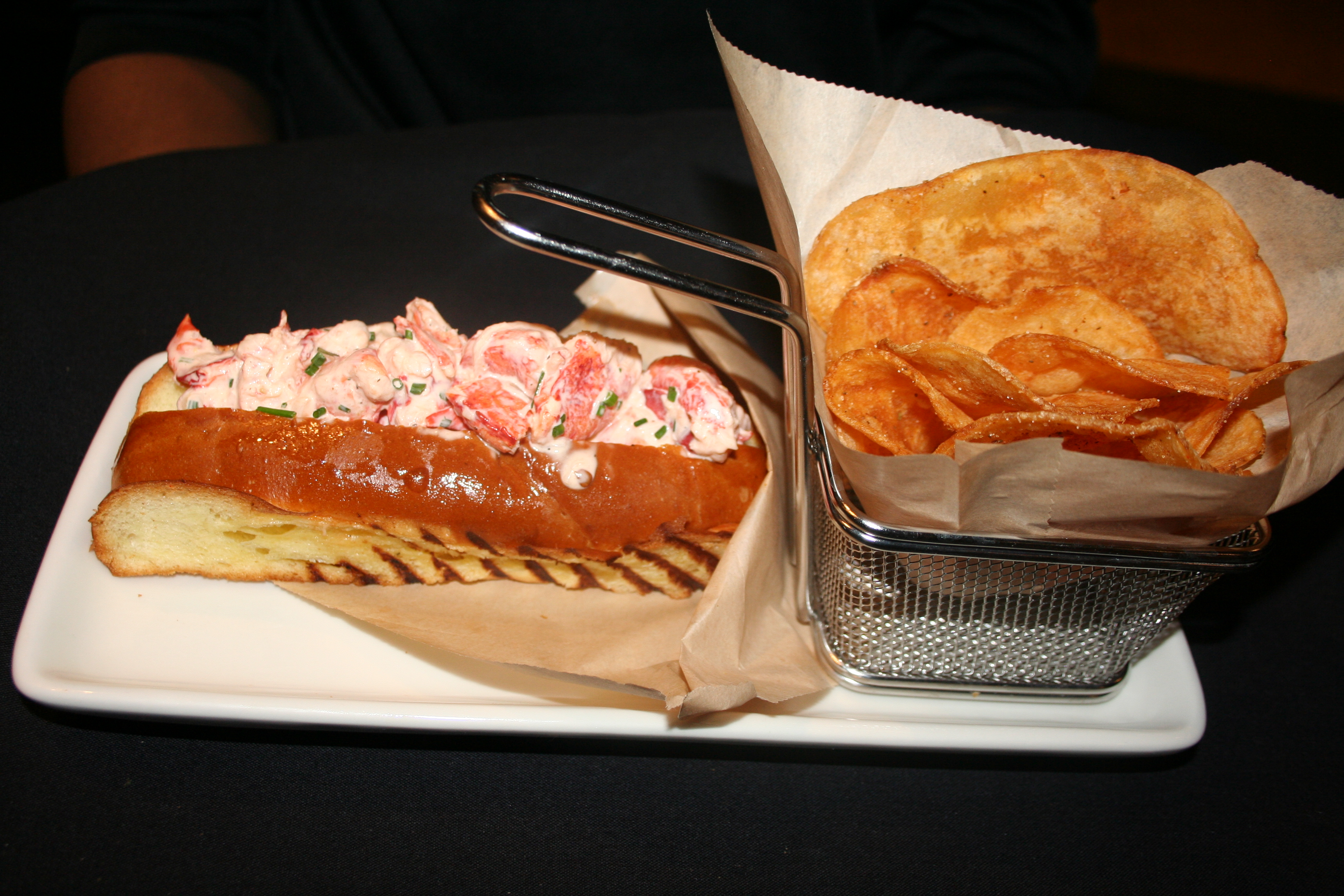 For $18 you can have a lobster roll and Old Bay chips. (Photo: Mark Heckathorn/DC on Heels)

During a media preview, we were offered a limited menu. I had the naan-chos, naan chips with red pepper hummus, sweet pea guacamole and smoked gouda topping. At $13, this was the best a  dish I sampled all night. I also had the lobster roll ($18) with poached Santa Barbara lobster, pink chili dressing and Old Bay seasoned potato chips. The lobster roll lacked flavor and the chips were limp. For dessert, I had the worst chocolate s’mores cake ($7) with toasted marshmallows, graham cracker crumble and whipped cream. I actually sent dessert back because the whipped creamed tasted like Crisco. My waited check with the kitchen and told me the Crisco taste was because Yard used crème fraiche in her whipped cream recipes. 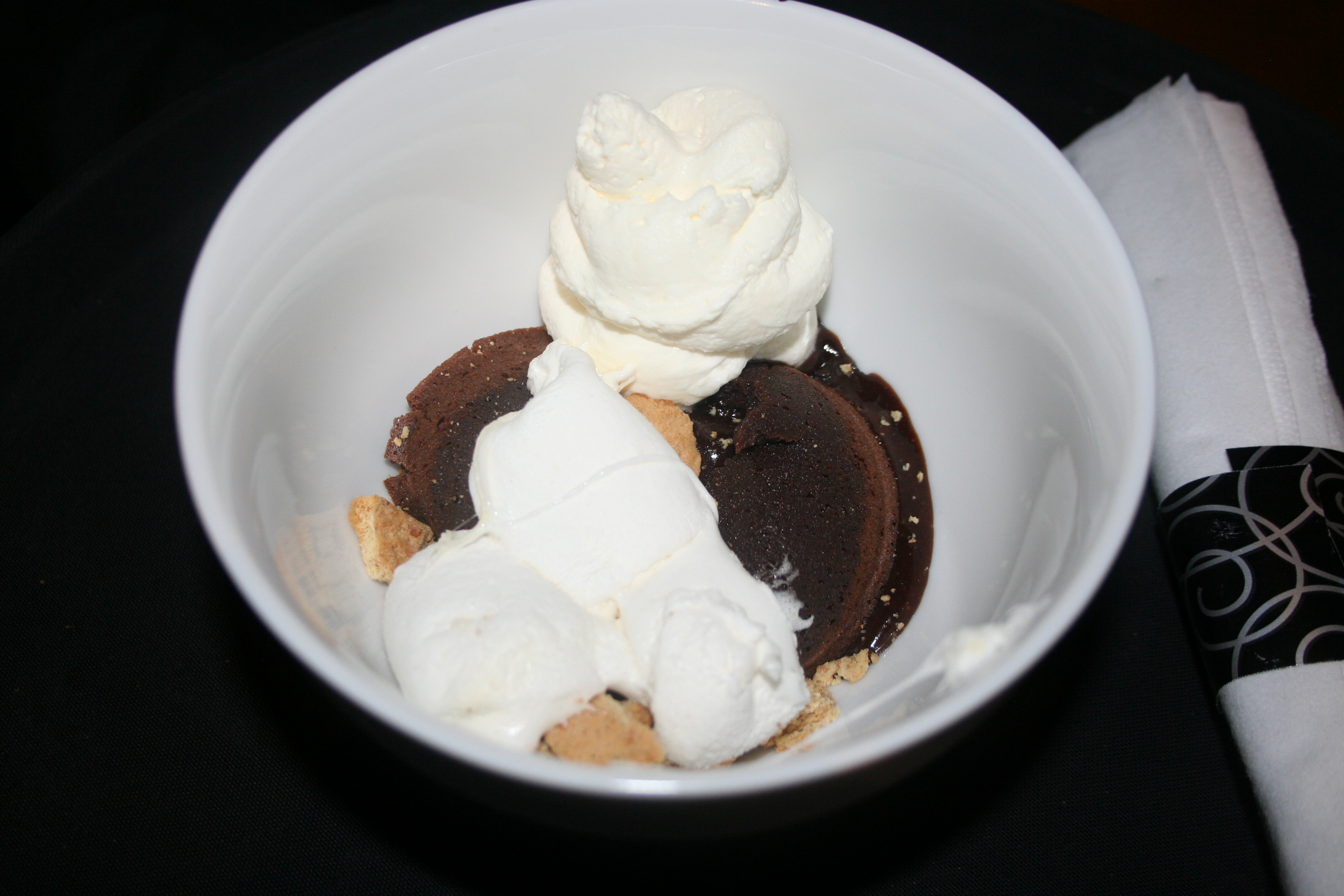 I contacted Yard by email about the foul tasting whipped cream and she explained: “Truly I feel terrible about what happened last night. I pride myself on tasting everything in the kitchen prior to service,” she wrote. “Half-way through the night I tasted the desserts and the ‘whipped cream.’ Unfortunately, the recipe was made incorrectly. Yes I do use crème fraiche but only a smidge. It gives the recipe a slight tang. Here was the problem: The crème fraiche was tripled in the recipe and then OVER-whipped. These mistakes were the cause of the “Crisco” factor and sour factor.”

A night for two at iPic with dinner and a movie is going to set you back about $100. More if you have dinner at the attached City Perch restaurant first. Unless you live close by, this is better suited for that once or twice a year night out.

For other times, the new Regal Theatre at the Springfield Town Center and Landmark’s Bethesda Row Cinema both have reclining leather seats and full-service bars in the lobby. The AMC Courthouse Plaza 8 and AMC Lowes Center Park 8 in Beltsville, Md. Also both have reclining leather seats with no upcharge, but no bars. And the new Arclight Cinema at the nearby Montgomery Mall has wider seats, a café and a bar, and none of them charges extra for the nicer seats.