Diners will have to wait a bit longer to visit Thip Khao, the first Laotian restaurant in the District being opened by chef Seng Luangrath, who also owns Bangkok Golden in Falls Church. Although the restaurant hosted a soft opening last week by invitation only, the public debut for the restaurant at 3462 14th St. NW in Columbia Heights has been delayed until early December. 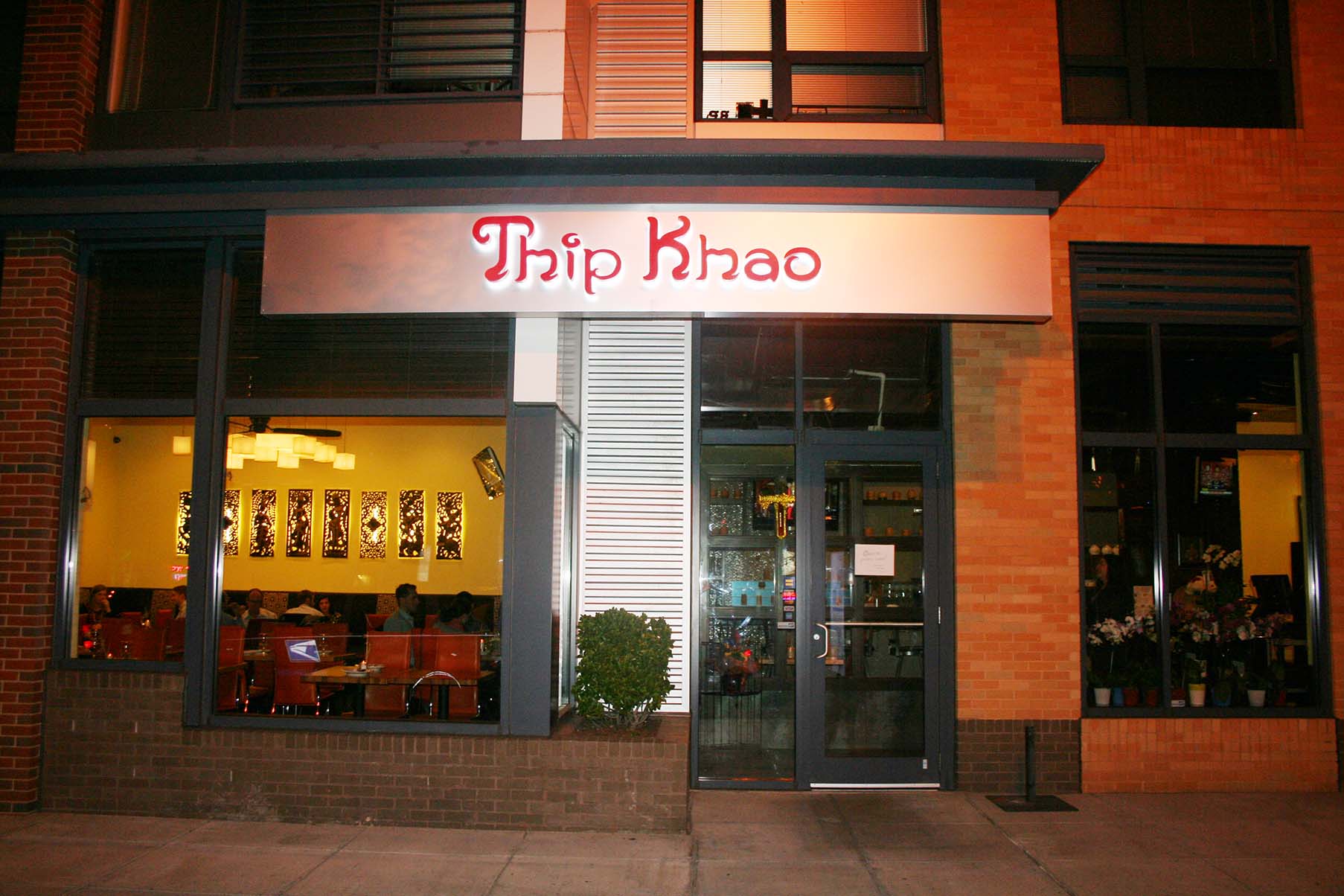 Luangrath is visiting her ill father in Laos before starting daily service in the space formerly occupied by Thaitanic II in the Allegro building. Luangrath fled Laos for a refugee camp in Thailand in 1981 amidst political turmoil lingering from the the Vietnam War. Stay tuned for an opening date.

Inside the 89-seat dining room, not much has changed except for the tables and some new artwork on the walls. In warmer weather, there will also be patio seating.

DC on Heels was invited to the soft opening. Let me preface this by saying this was my first Laotian food. Laos lies in the middle of Thailand, Vietnam, Cambodia, Myanmar and China. I’ve been told that Laotian food is mainly influenced by southern Chinese and northern Thai cooking. While many of the ingredients are common, especially lemongrass, the food at Thip Khao was unlike either I had ever tasted.

Spice – hot, make-you-sweat spice – dominated many of the dishes my guest and I sampled. The meal started with complimentary board of hard boiled egg halves topped with a way-too-hot red pepper paste, pork rinds and dried seaweed topped with sesame seeds. I was braver than my guest and tried all three items, but most went back to the kitchen. 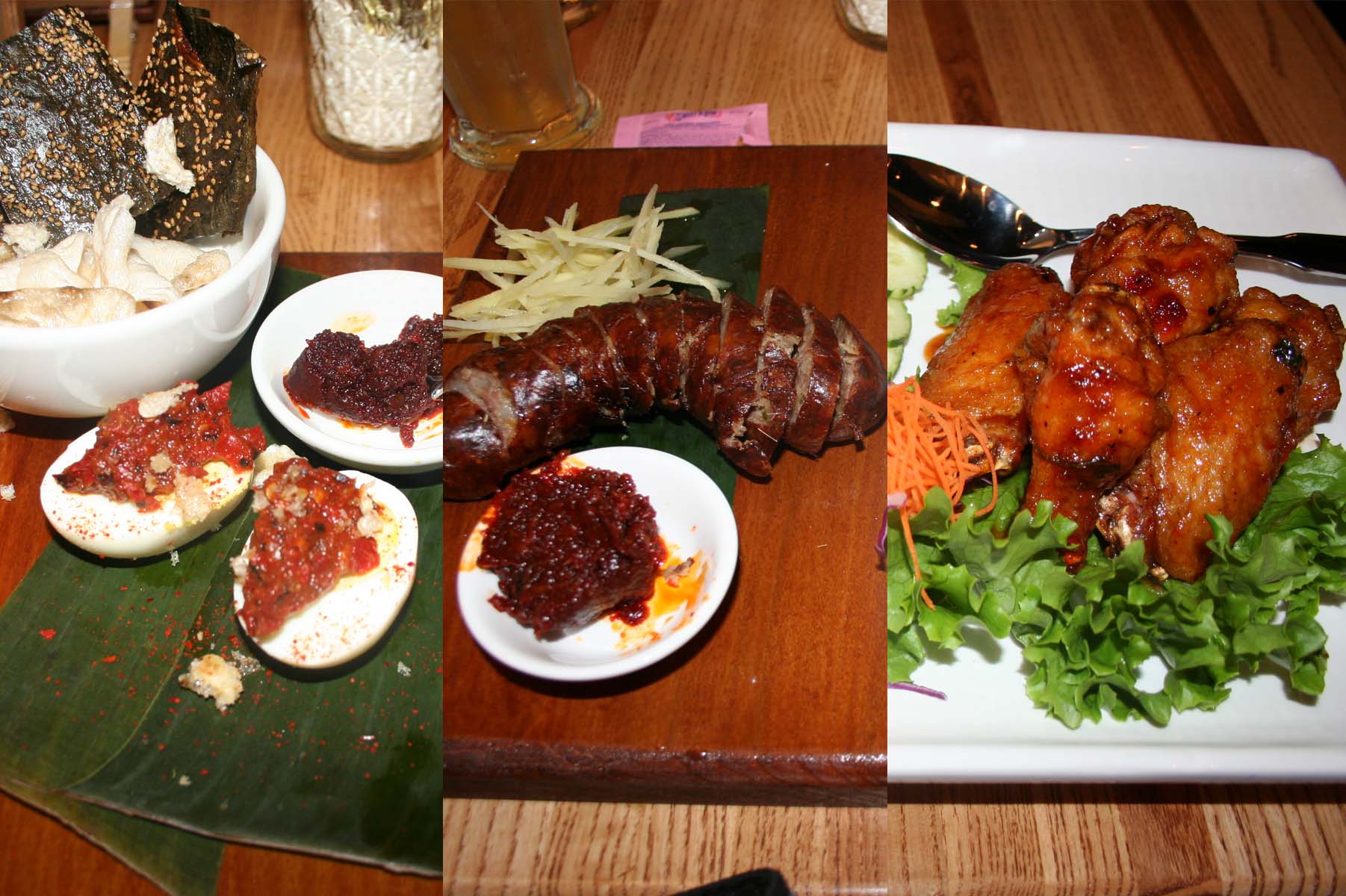 For appetizers, we orders saioua ($10), a pork sausage made with lemongrass, peanut and ginger and served with jaew mak len, a tomato-based dip, sort of a Laotian salsa; and the chuenh peek gai, crispy chicken wines in a house sauce. Both were good, and surprisingly, the wings weren’t that spicy. Appetizers ranged from $5-$12. 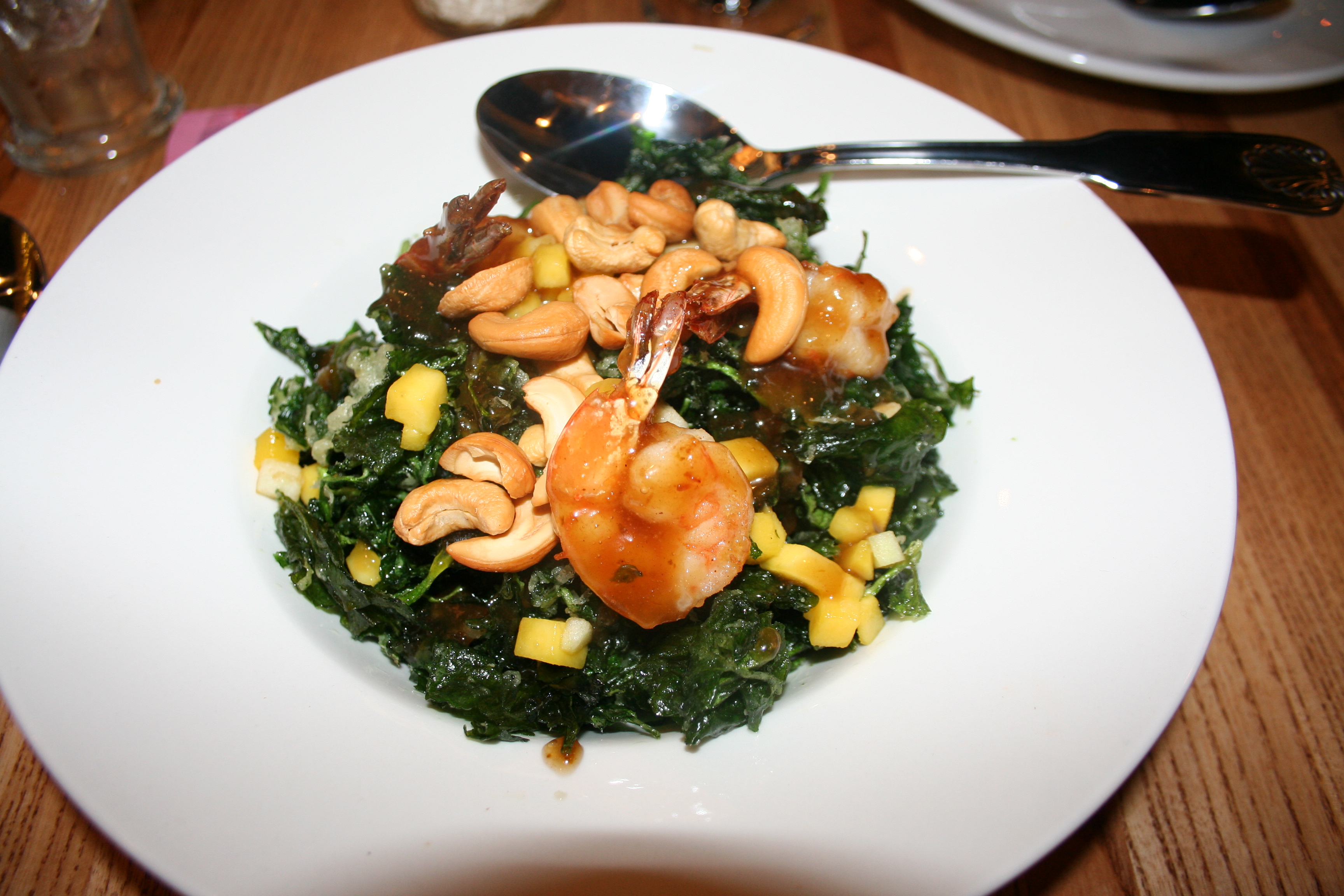 Soups and salads range from $7-$15. Surprisingly, the best dish of the night was the pak nam ($11), a crispy watercress salad with shrimp, shrimp, cashews, tamarind sauce, mango and green apple. The watercress was crispy as advertised and the sauce sweet. With the cashews, this was one crunchy bite after another. 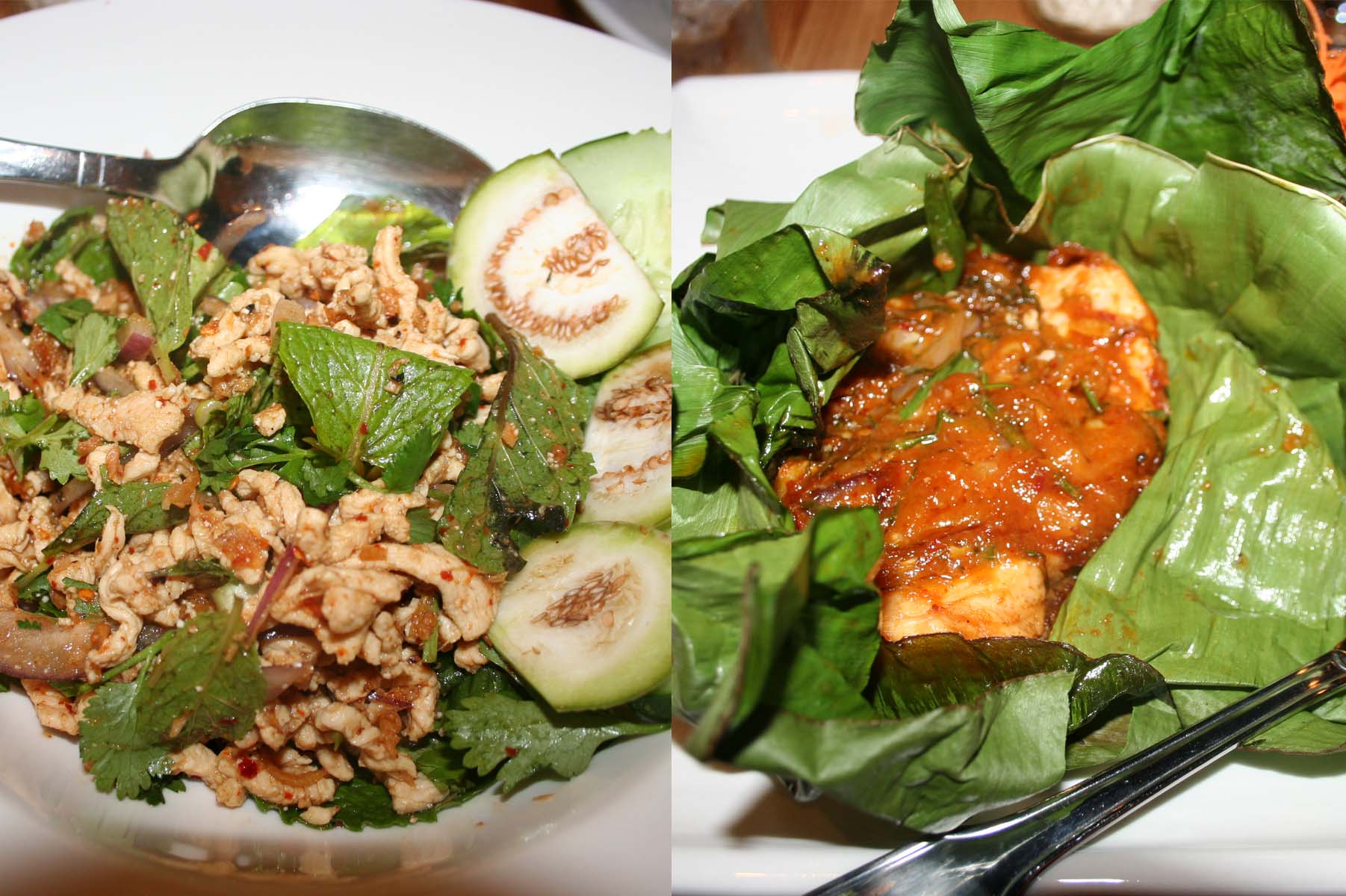 For my entrée, I chose the classic gai laab ($11), a minced salad type dish with chicken, kaffir lime, leaves, toasted rice, shallots, garlic, green onion, cilantro and mint. The laab also comes in duck, pork, beef or tofu. While I like spicy food, this dish was way too hot and I had to send it back. After only three or four bites, my mouth was on fire. There’s no way I could have made it through the entire plate. Luckily, our server brought out a milder version that was much better. My guest had the knap pah ($14), grilled salmon wrapped in banana leaves with herbs, ginger and dill. It can also be served with Chilean sea bass. Entrees range from $9-$18. 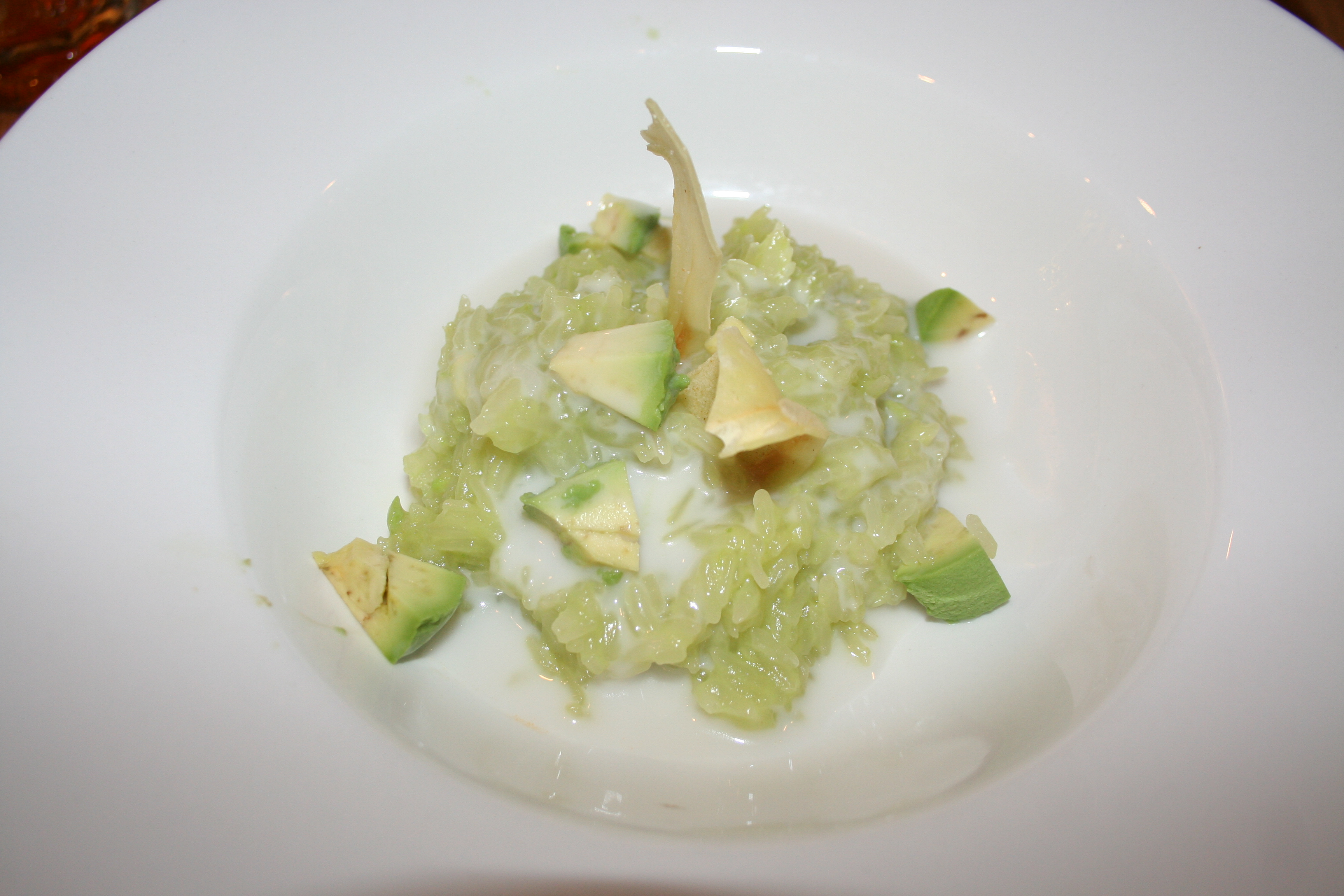 The only dessert offered the night we visited – it wasn’t even listed on the menu — was khao mao ($5.95), avocado sticky rice, which was good, but not sweet and not what I’d consider a dessert. Also during our visit, Thip Khao had not alcoholic drinks, although it eventually will, and no soda. All the drinks such as Thai iced tea are sweet, so the only sugar-free option is D.C. tap water.

While thip khao is a sticky rice basket in Laos, there was no plain sticky rice on the menu – not even as a side dish. Prices were a bit high for the portion size, especially since the entrees came with no sides. I had expected a thip khao filled with sticky rice, since it is the main staple in Laos. Sticky rice is usually rolled into a ball and used to scoop up the other food, similar to the way injera bread is used in Ethiopian cuisine.

For a look at the entire soft opening menu, click here. Many of the menu items are vegetarian and gluten free, or can be made so. Hopefully, Chef Seng will make some adjustments prior to opening. For sure the menu needs to note the spice levels, especially when the ingredients don’t indicate how hot the dish will be. At the very bottom of the menu, way down below the undercooked meat warning, was a list of spice levels: phet noi (mild), phet lai (medium) and phet e’lee (Lao hot), but no indication which dishes fell into each category or an indication the diner was to specify the spiciness. If that is the case, the server should ask and the kitchen should not just assume phet e’lee.

When it opens, Thip Khao will be open from 5-10 p.m. Sunday, Monday, Wednesday and Thursday and 5-11 p.m. Friday and Saturday. It will be closed on Tuesdays.