A Mix of Hunger Games & Lord of the Flies

When Thomas wakes up trapped in a massive maze with a group of other boys, he has no memory of the outside world other than strange dreams about a mysterious organization known as W.C.K.D. Only by piecing together fragments of his past with clues he discovers in the maze can Thomas hope to uncover his true purpose and a way to escape. 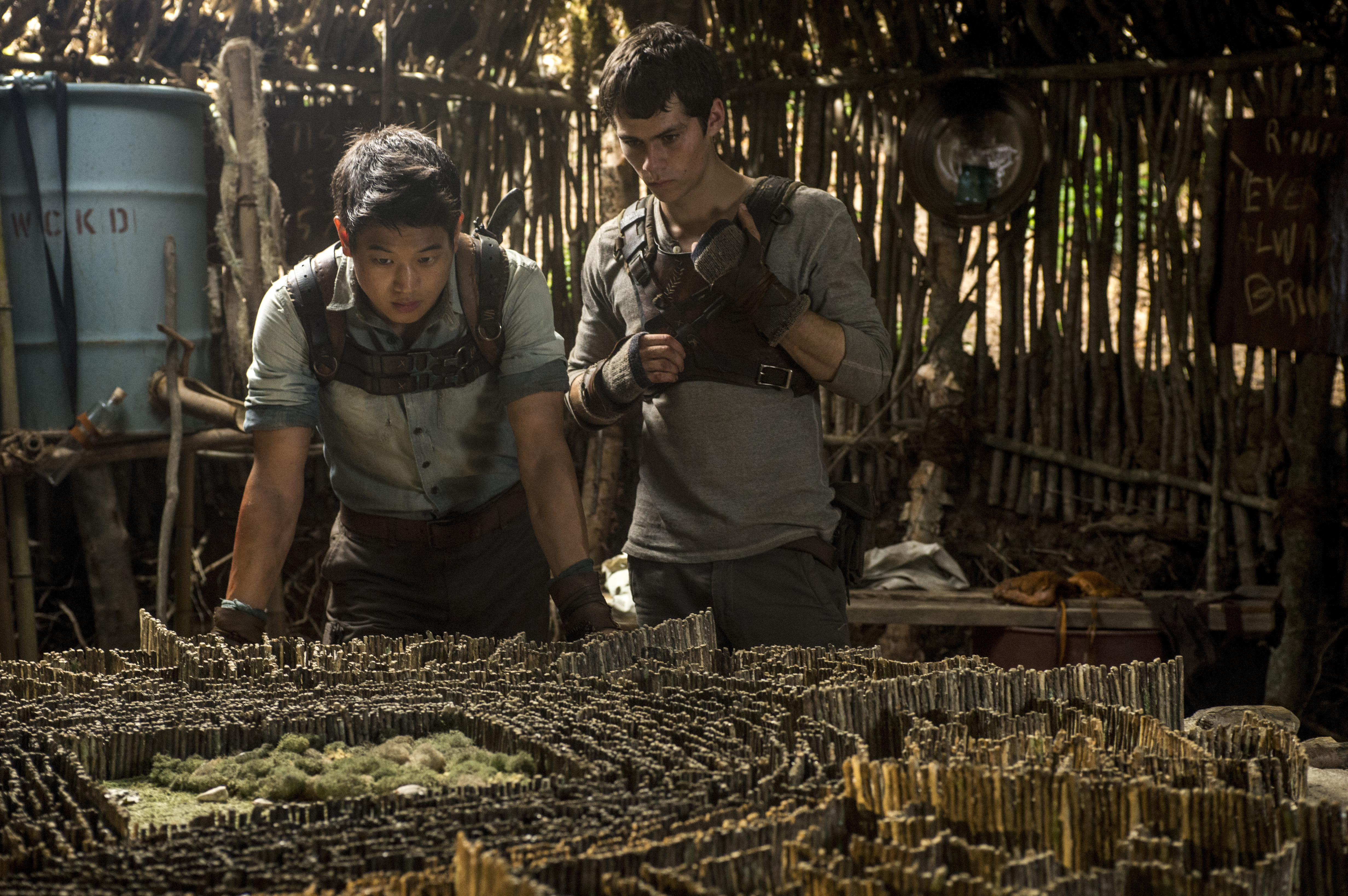 Based on James Dashner’s bestselling books, The Maze Runner opens as Thomas (Dylan O’Brien) wakes up in a freight elevator, hurtling toward an unknown destination that turns out to be The Glade, an encampment inhabited by a multi-ethnic group of male teenagers who have been living there for three years. He has no memory of the outside world other than his name and strange dreams about a mysterious organization known as W.C.K.D.

He’s quickly assimilated into the makeshift society that the teens have created, even though all of them suffer from a similar amnesia. Alby (Aml Ameen), the first arrival, and Newt (Thomas Brodie-Sangster) form the leadership team, and enforcer Gally (Will Poulter) provides the physical persuasion required to keep everyone in line.

They grow their own food, raise their own livestock and maintain their own system of government, because there’s no way to escape. At the edge of the Glade is a massive maze. Every night, the Maze shifts configuration, and every day, the Runners enter the labyrinth guided by Minho (Ki Hong Lee) to map each iteration in an ongoing quest to find a way out, but they must return to the Glade before nightfall and the emergence of the terrifying Grievers, giant spider-like biomechanical predators that patrol the Maze. After more than three years of exploration, they’re still searching for the secret to the Maze.

First-time feature director Wes Ball and screenwriter Noah Oppenheimer set about building tension amongst the group. This being a community built purely of testosterone, conflict begins almost immediately upon Thomas’ arrival. While everyone else is content to merely endure their predicament, Thomas starts asking the questions they’ve all tried to forget. His bending of the rules puts him at odds with Gally, who fights to maintain the status quo. Thomas is quickly promoted to Runner after helping Alby, who was stung by a Griever, and Minho survive a night in the Maze and killing a Griever, both unprecedented feats.

When the elevator arrives unexpectedly and drops off Teresa (Kaya Scodelario), the only girl ever sent to the Glade, it only signals more trouble on the horizon. Teresa’s arrival upsets the delicate social order further, particularly since she appears to have some mysterious connection with Thomas, although neither can remember exactly what it might be. Thomas and Minho’s search continues to turn up more clues, including an electronic device retrieved from the slaughtered Griever that might help them unlock the Maze’s inner workings. But with Alby gravely injured and Gally aggressively pushing back against any attempts to abandon the Glade, Thomas and Teresa will need to convince the other boys that a direct and strategic penetration of the Maze is their best hope for escape and survival.

The sequel-teasing finale is improbable, but until that point, The Maze Runner is a relatively well-rounded teen adventure. Even if it doesn’t manage to be quite the Hunger Games level hit its producers would like, it’s the best of the wannabes so far. The acting is strong, though it remains to be seen whether O’Brien can carry a franchise like a Jennifer Lawrence. Scodelario’s Teresa doesn’t figure in the action until well into the film, when she initially causes a sensation by disrupting the masculine equilibrium, but then gets quickly relegated to sidekick status. She will bear watching in the sequels. Equally lacking in backstory, most of the sizable supporting cast has little opportunity to build character, although Brodie-Sangster and Poulter are better differentiated as Thomas’ advocate and antagonist, respectively. Aside from some uneven handling of the cast, Ball competently styles the action sequences throughout the film and capitalizes on his VFX expertise with pulse-pounding scenes tracking the Runners through the Maze battling Grievers. Rated PG-13. Opens Sept. 19, 2014.