Chuy’s, the quirky Austin, Texas-based Tex-Mex restaurant chain has its sights set on the DMV. First up is its restaurant at 11219 Lee Highway, Fairfax in a former Chili’s location, which opens on Tuesday. Until now, the restaurant’s nearest location were two in Richmond. 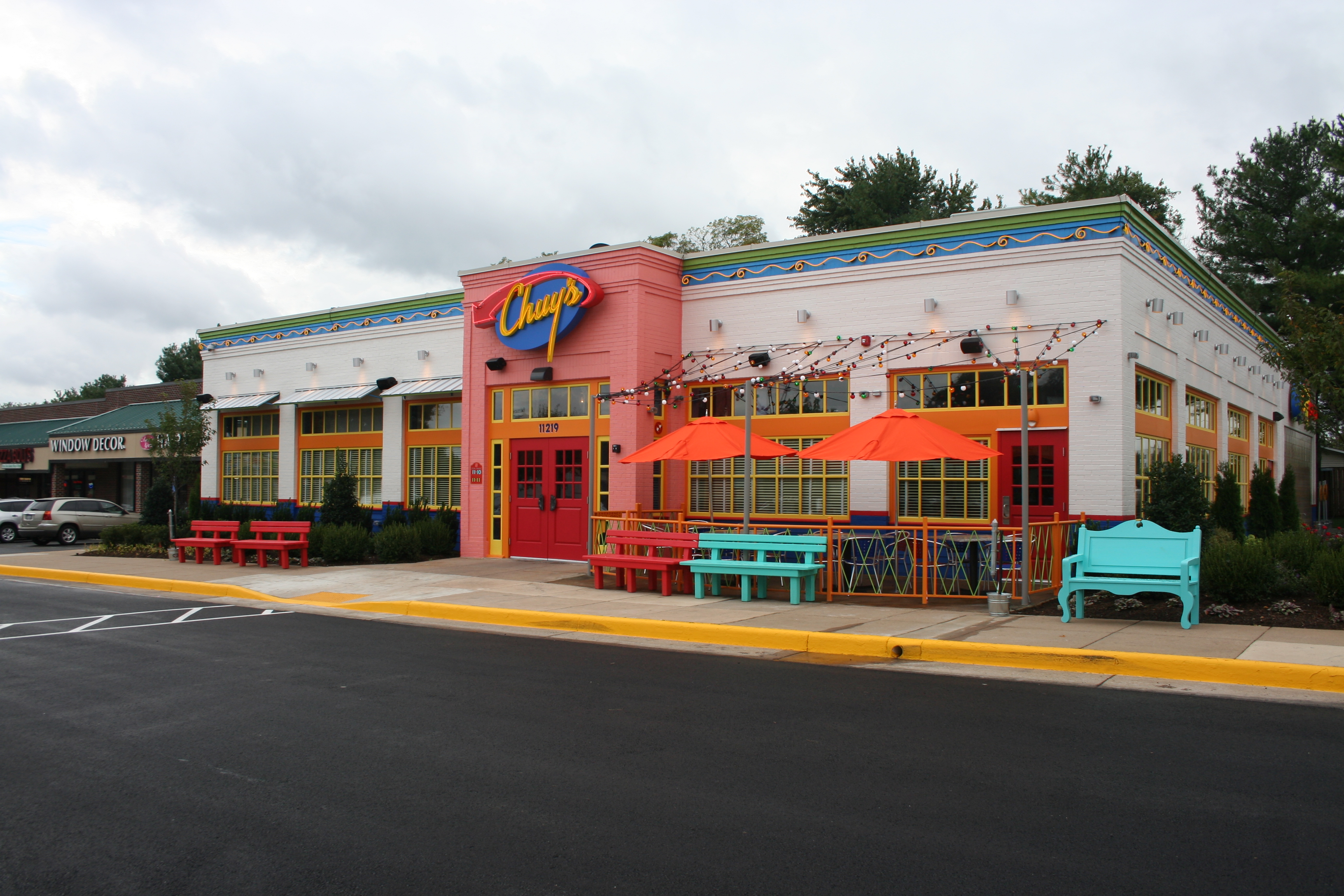 A larger, second location will open at the newly renovated Springfield Town Center in mid-October, Lance Smith, Chuy’s area manager for Northern Virginia told DC on Heels during a preview on Saturday. That will be followed by Sterling and Gainesville in 2015. Then the company will move north in D.C. and Maryland, eventually having about a dozen locations in the DMV.

What’s on the menu? To start, a free nacho bar in the trunk of an old car in “La Chihuahua Bar.” The bar is dog themed with customer’s invited to bring in a framed photo of their dog to receive a free appetizer. The framed dog photo are hung on the walls permanently. 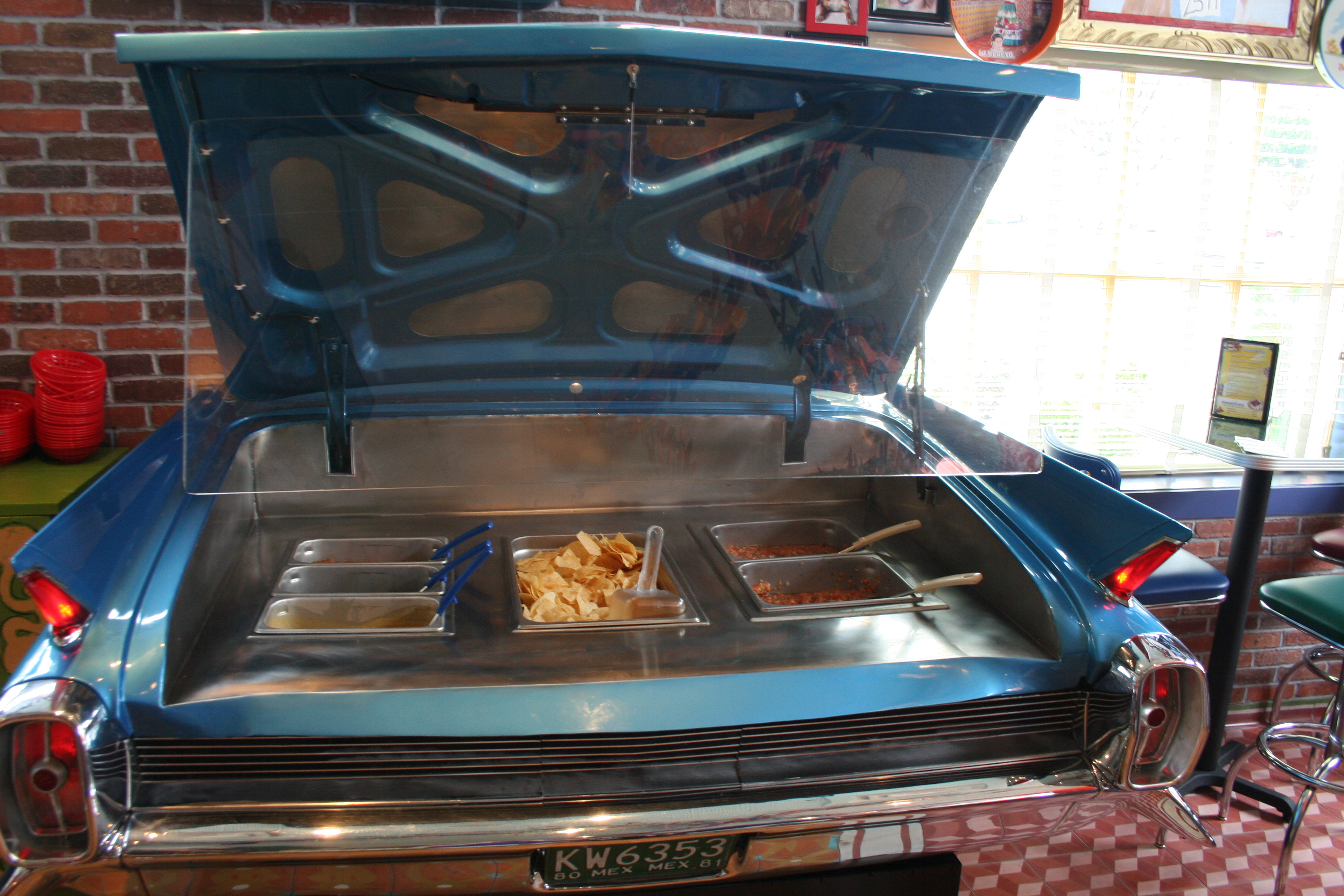 “We take the back end of a classic car and convert it into a build-your-own nacho bar,” said Kainne Hilburn, Chuy’s marketing manager for the southeast region. “It’s totally free from Monday through Friday, 4 to 7 p.m. It includes chips, sirloin, our queso and salsa fresca. It’s a good little treat that compliments happy hour.” There’s no minimum purchase required partake in the free nacho bar, so guests can make themselves a plate of nachos to eat in the lobby while they’re waiting for their table.

In 1982, Chuy’s opened its first restaurant in Austin. The 56 restaurants are primarily located in Texas and the southeast, but the chain can also be found in Indiana and Ohio. Hilburn described Chuy’s is “more rock-and-roll than mariachi,” as is apparent with each location displaying a unique Elvis Presley shrine in honor of the restaurant’s patron saint. It started when co-founders Mike Young and John Zapp didn’t have a lot of money to decorate the original place so they purchased a cheap velvet painting of Stevie Wonder and another of Elvis from “the guy on the corner.” Customers began donating their own Elvis has memorabilia and the shrine was born. Now, customers who come dressed as either Elvis or Priscilla on the King’s birthday, Jan. 8, get a free entrée. 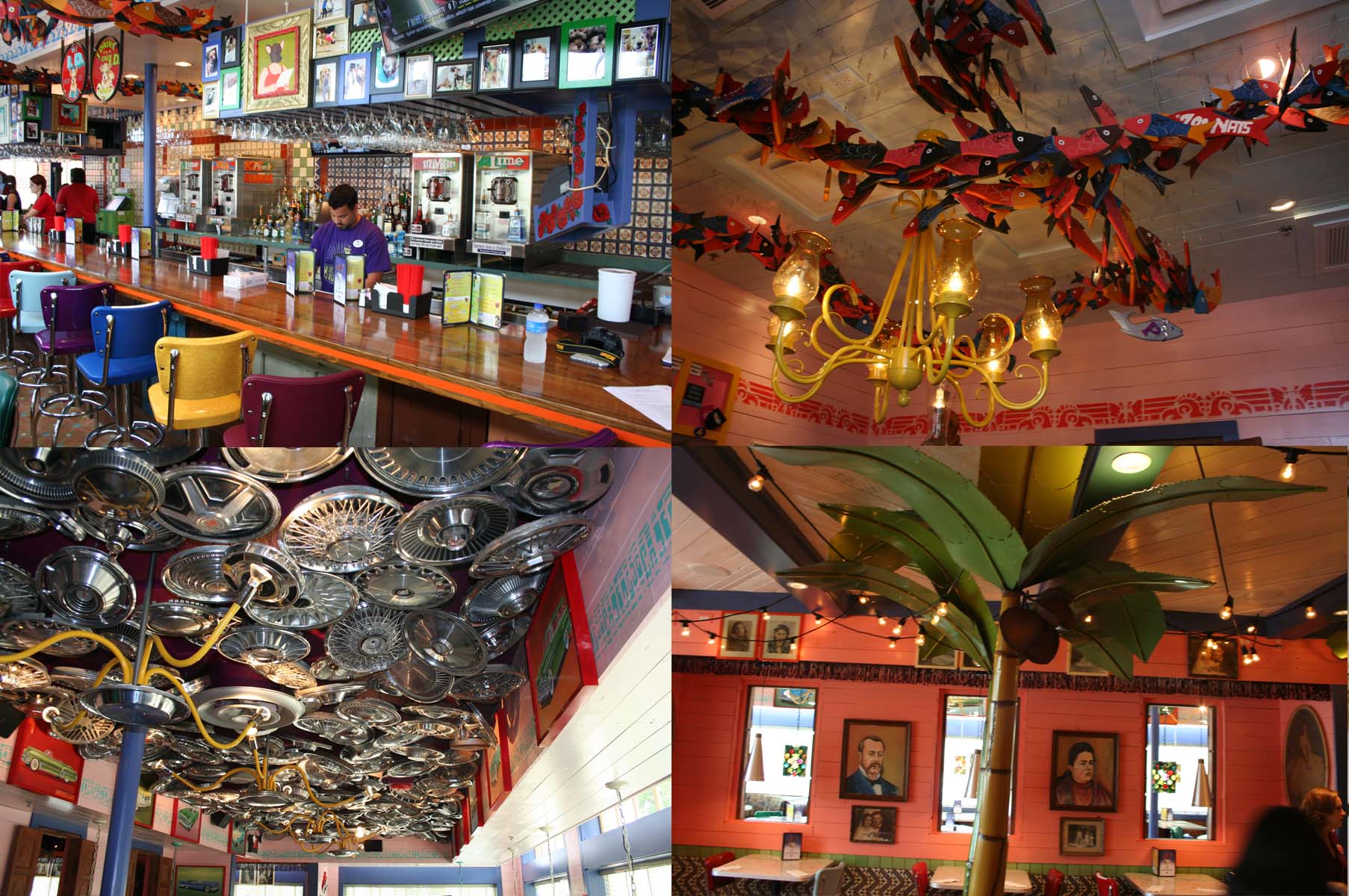 Chuy’s has a saying, “If you’ve seen one Chuy’s, you’ve seen one Chuy’s.” Hilburn said each location has a personality of its own, but in addition to the Elvis shrine, you can expect hand-carved wooden fish, metal palm trees, hubcaps hanging from the ceiling, uneven tile in funky color and colorful artwork. The Fairfax location has 24 very tiny koala bears hidden throughout. 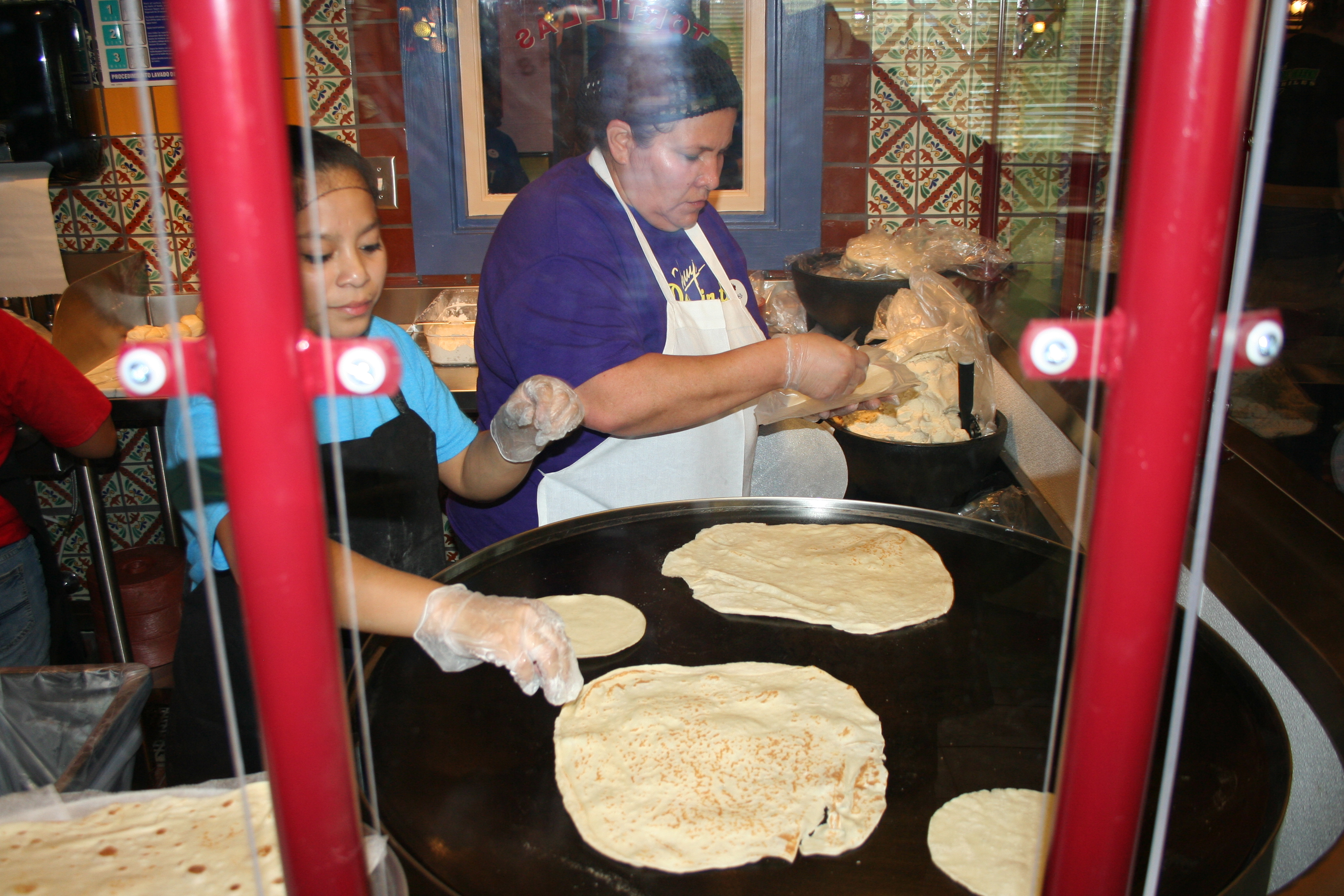 Most of the food is made from scratch using ingredients delivered fresh six days a week. Everything from the nine sauces – from the mild tomatillo sauce to cheesy queso to the spicy Hatch Green Chile — and the corn, blue corn and wheat tortillas to the pulled chicken for the burritos and enchiladas, tortilla soup and chips are made in house several times a day. In fact, almost a third of the kitchen is taken up by the walk-in cooler housing the produce and the only freezer – which holds ice cream, push pops and French fries for the kids’ meals – is smaller than a standard home refrigerator. The hand-rolled tortillas are cooked fresh on a traditional comal in the dining room and salsa fresca made every hours Chuy’s showcases dishes made from authentic recipes found in South Texas, New Mexico and Mexican border towns. 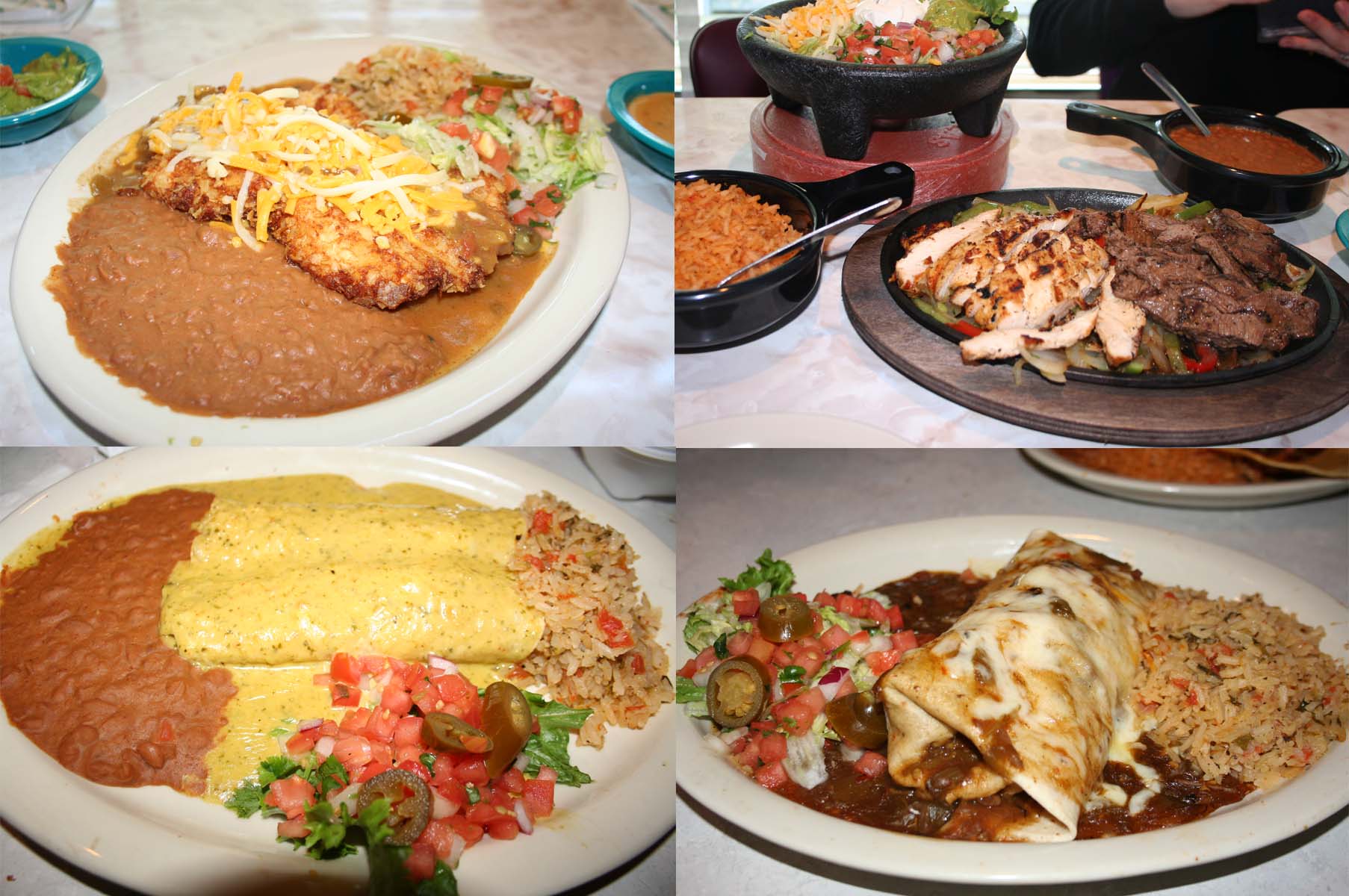 My favorites include the queso; the tortilla soup made with house-made chicken broth, freshly-roasted hand-pulled chicken, fresh avocado, roasted corn, green chiles, tomatoes and cilantro, topped with cheese and tortilla strips; the combination fajitas; the Chicka-Chicka Boom-Boom; and the spicy green chile rice.