Brookland Pint Is Still Working Out the Kinks

Finally, after years of having only the Colonel Brooks Tavern as a dining option, the Brookland neighborhood in Northeast is developing with the new Monroe Street Market. The development at Monroe Street & Michigan Avenue NE across from The Catholic University of America is a mix of retail, residential and 27 artist studios. 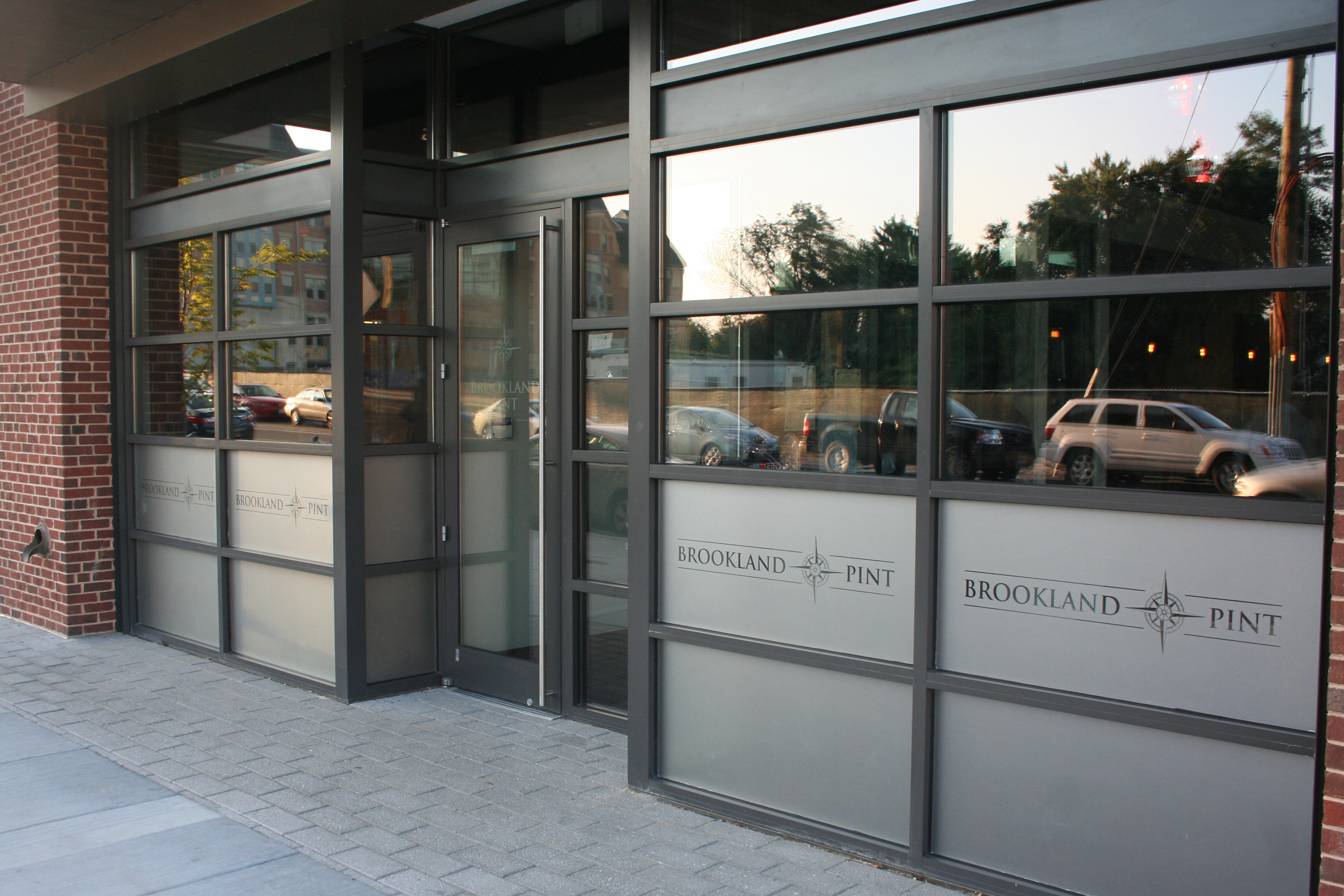 The new development is home to three buildings with retail including the Catholic University bookstore on street level and apartments above. Where empty lots once stood, there’s an &Pizza and a Potbelly sandwich shop soon to be joined by a Barnes & Nobles Café serving Starbucks coffee, a Bus Boys & Poets, Filter Coffeehouse and Espresso Bar, a Bike Rack bike shop and Brookland Pint, owned by John Andrade and sister of Columbia Height’s Meridian Pint and Adams Morgan’s Smoke & Barrel, which opened Aug. 18.

Brookland Pint is located at 716 Monroe St. NE along the Arts Walk in the Brookland Works development – the building right above the Brookland-CUA Metro station with “BROOKLAND” painted across it. 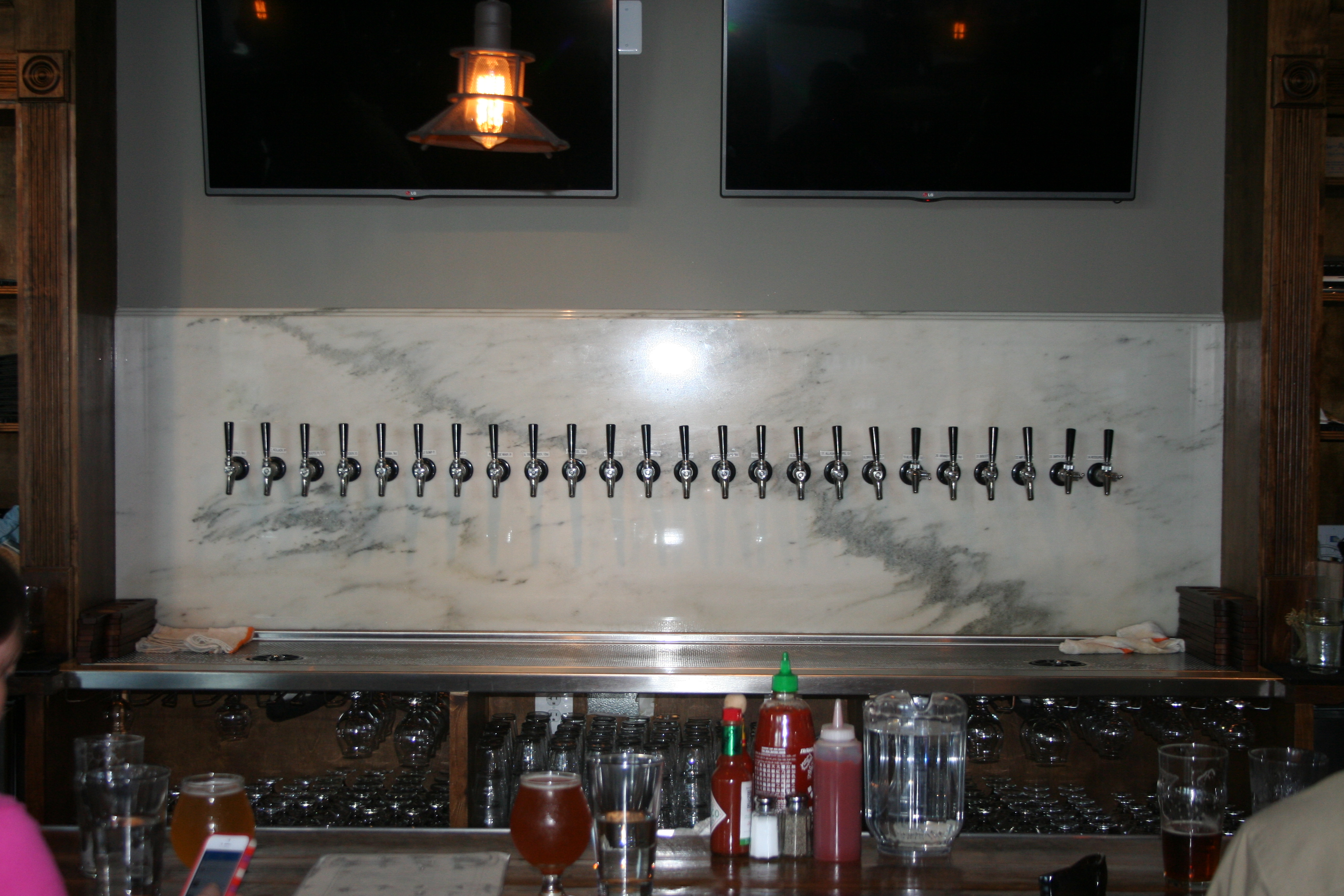 The wooden bar made from wood reclaimed from Southern Maryland tobacco barns is the focal point of this beer-centric restaurant specializing in American craft beers. At the back of the bar is a white Vermont marble and glass enclosed beer tap and refrigeration unit which houses all of the kegs and large format beer bottles. The unmarked taps coming out of the marble serve up the 24 beers on tap – the current selection ranges from $6-$12 a glass and changes weekly – and another 11 in bottles, which cost between $21 and $44 a bottle.

USB and electrical outlets are situated along the bar and at nearly every table. The same reclaimed wood used to build the bar was also used for the two communal tables in the bar area and trim throughout the restaurant. A Virginia Juniper tree from along Utah Street, which fell during the 2012 derecho, was used to build the restaurant’s banquet room tables. 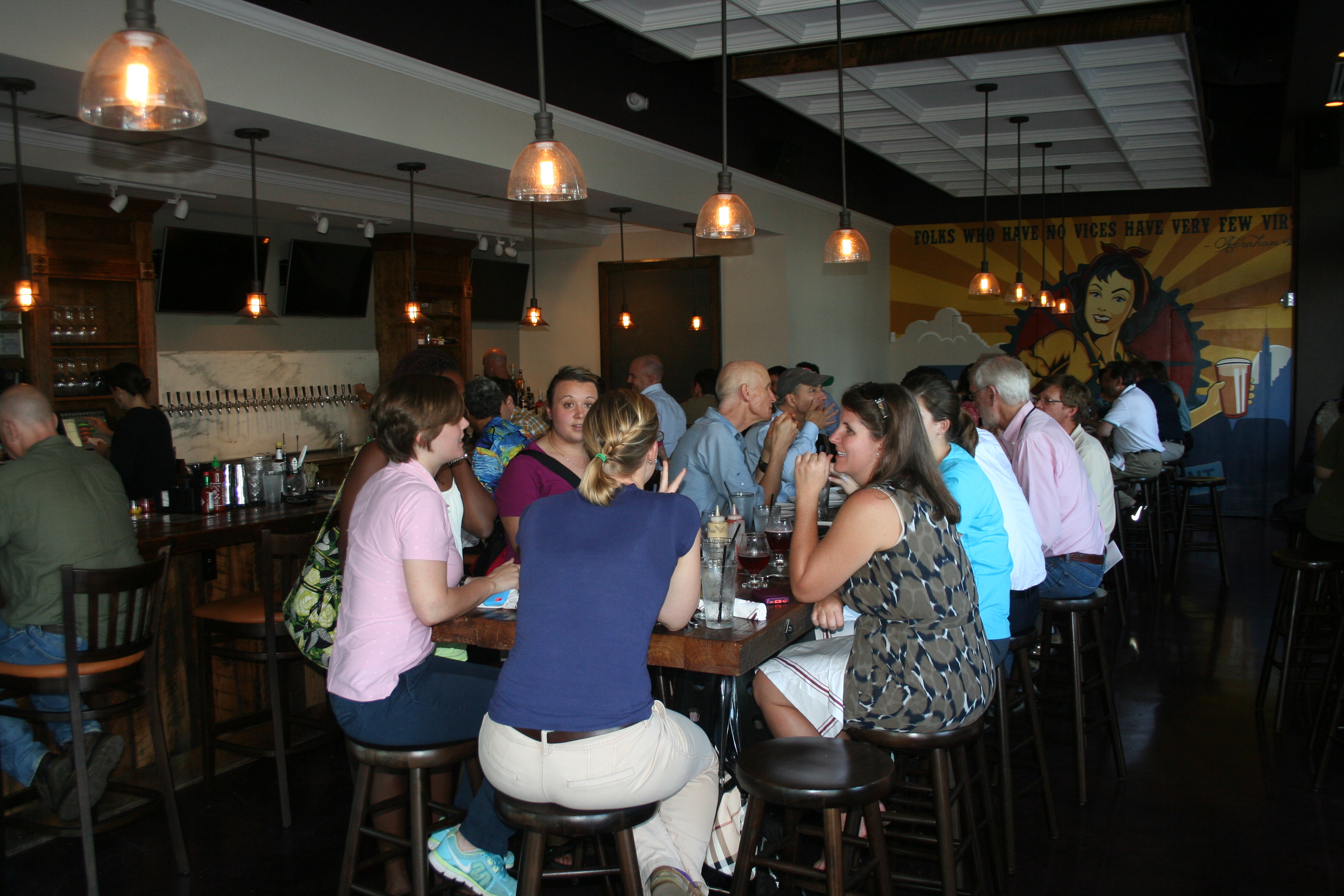 On my recent visit, the restaurant and bar, which seat 118 customers, and the patio, which seats another 48, were packed and there was about a 15 minute wait. My guest and I were notified our table was ready by text – none of those bulky buzzers to carry around – and were seated.

Chef Rebecca Hassell’s menu features locally grown and harvested foods that range from southern comfort dishes to American classics. Many of the dishes are gluten-free, vegan or can be made vegan. Hassell was formerly a sous chef at Estadio and Masa 14.

Unfortunately, our dining experience wasn’t as impressive as the restaurant itself. Our server left a lot to be desired. She didn’t explain the beer menu at all. Luckily, the server at the next table did. We had to ask for water, then it was served without ice. The table on the other side received their food before us, even though the server took our order first. And she only checked on us to take our drink order, our food order and bring us our check. I had to ask a food runner for a soda refill. The food was hit or miss with some dishes incredible and other went on my list not to order again. I’m hoping to chalk it up to the restaurant having only been open a few weeks and were still working out the kinks. 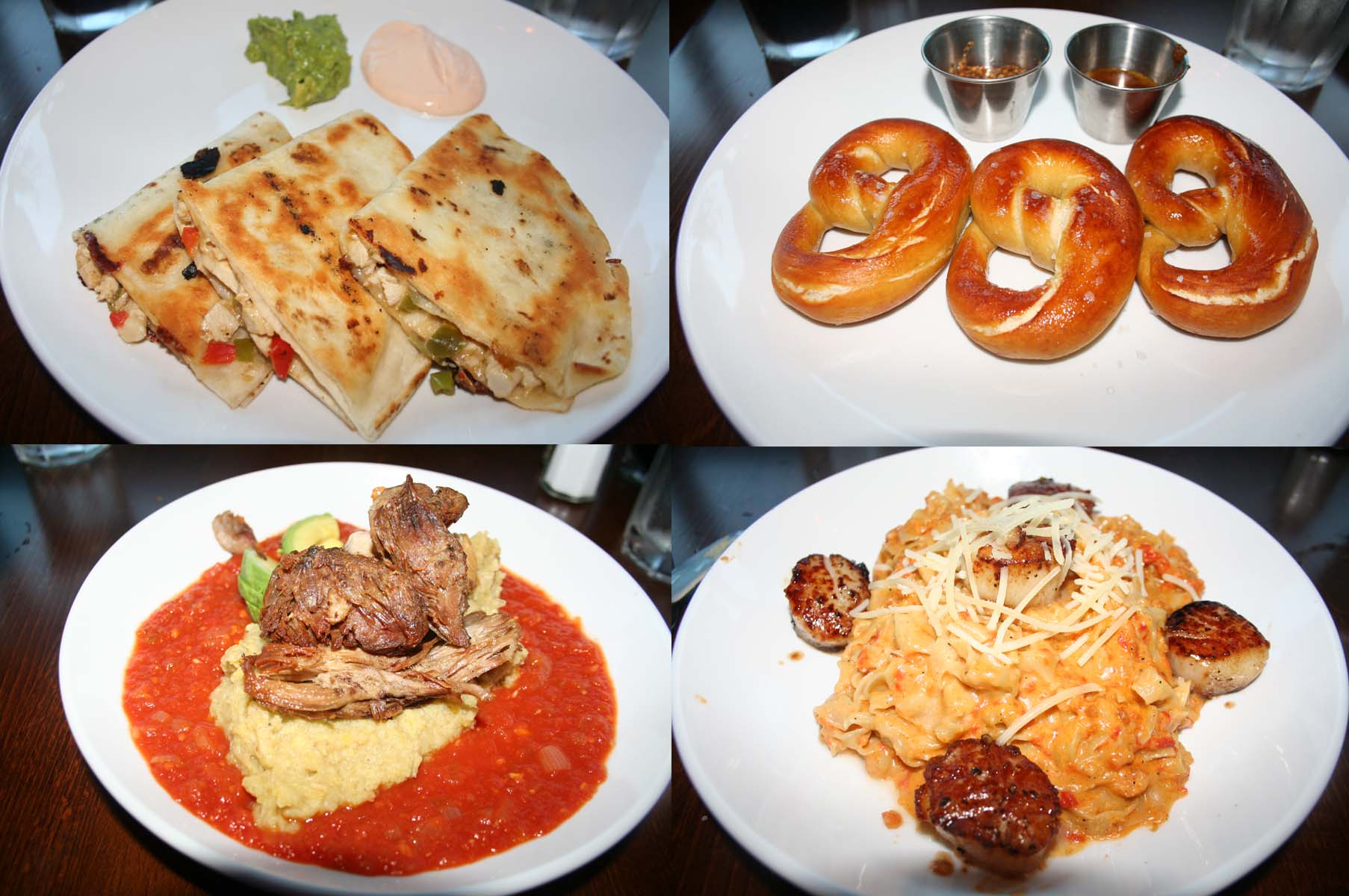 Appetizers include (top, l to r) grilled chicken and pepper quesadilla and soft pretzels. Entrees (bottom, l to r) include the Puetro Rican mofongo and the seared scallops. (Photos: Mark Heckathorn/DC on Heels)

We started our meal with soft pretzels with a house-made spicy mustard and a classic cheese and beer sauce that didn’t taste like beer or cheese and was a dark orange color. The pretzels were dense and chewy and practically saltless – I suspect they were frozen. The Otis quesadilla with grilled chicken, peppers and pepperjack cheese served with guacamole and a spicy sour cream was a much better choice, although it was a bit small. Appetizers range from $7 to $24 and includes cider-steamed PEI mussels, pimento cheese spread and ciabatta, deviled eggs with garam masala and toasted coconut flakes, an artisanal cheese plate, macaroni and cheese, wings and sliders.

For entrees, we chose the Puerto Rican Mofongo with crispy pork, garlicky mashed green plantains, spicy tomato sauce and avocado and the seared sea scallops with roasted red pepper pesto over house-made fettuccini. Neither of us had ever had mofongo before, and I’m not sure if I would again. The tomato sauce tasted like salsa, the pork was dry not crispy and the plantains were lumpy and tasteless. The scallops on the other hand were perfect, the pasta cooked just right and the sauce tasty. Other entrees, which range from $12 to $28, include Kashmiri curry with coconut green beans, carrot chutney, spiced lentils and rice piflaf; fish and chips with beer-battered cod, fries and coleslaw; oregano-roasted chicken breast with zucchini-feta fritters, tzatziki sauce and a grilled pits; and a rib-eye steak with yucca, collard greens and chimichurri sauce. 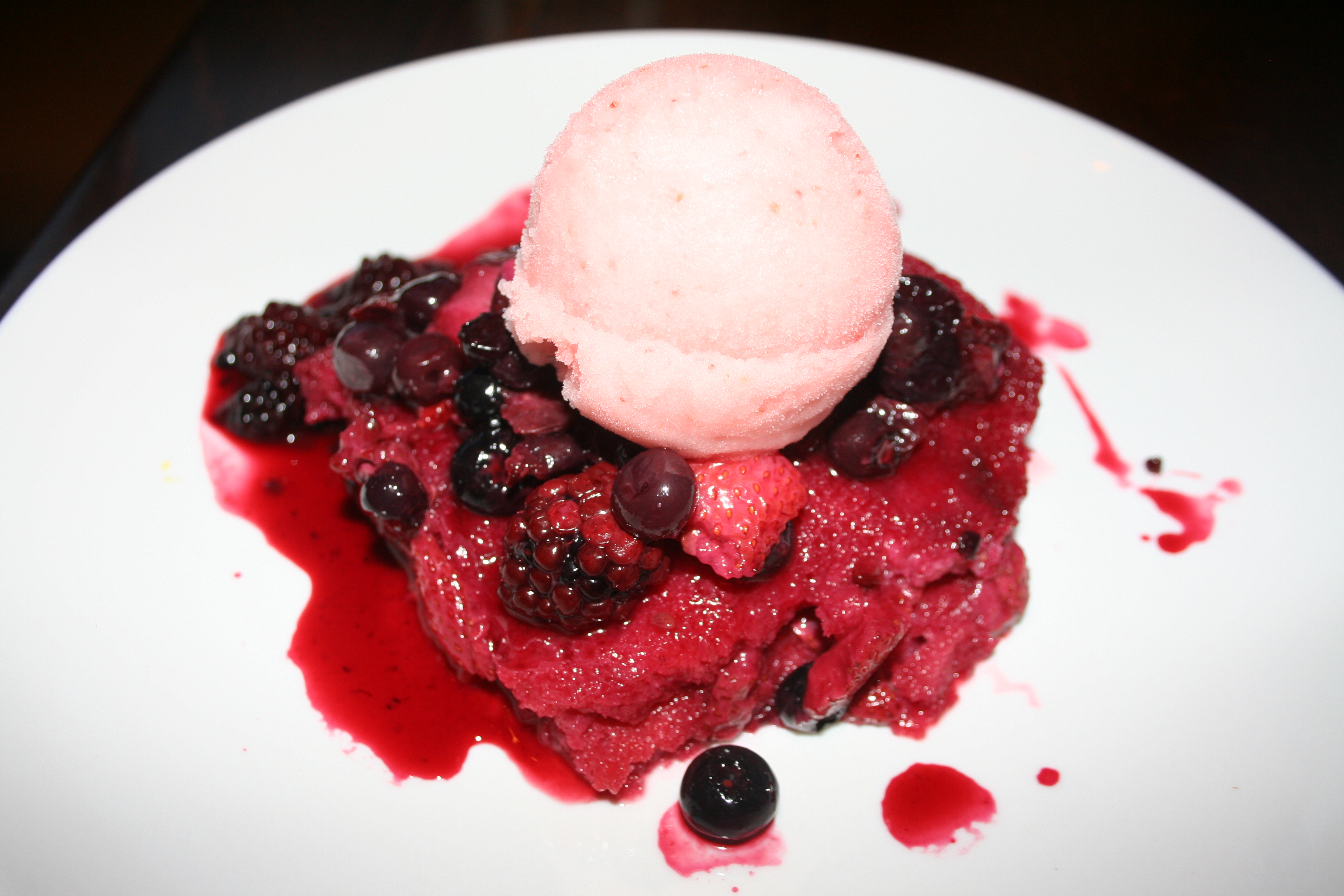 The chilled summer berry bread pudding was the star of our meal. (Photo: Mark Heckathorn/DC on Heels)

The best dish of the night was the chilled summer berry bread pudding soaked in blueberries, strawberries, blackberries and raspberries and topped with strawberry moscato sorbet. This dish was five-star. Other desserts, which range from $6 to $7, include zucchini spice cake with cream cheese frosting and a hot fudge sundae with chocolate and vanilla ice cream topped with whipped cream, candied pecans and a cherry.

After observing other diners around us, the sandwiches, which range from $10 to $17 and are served with a choice of fries, sweet potato wedges, coleslaw or a side salad, looked like they would have been a better choice. The grilled chicken Caesar sandwich with bacon, romaine lettuce, a parmesan crisp and Caesar dressing on a ciabatta roll and the lamb shish kebab with cucumber-mint sauce, marinated feta, lettuce and tomato on a grilled pita both looked especially tasty. They also have a friend green tomato sandwich with pimento cheese on rustic farmhouse bread, a banh mi with roasted pork, chicken liver pate, pickled vegetables, cilantro and chiles on a baguette and barbecue pulled pork with coleslaw on a Kaiser roll. The menu also includes 10 burgers made with beef, chicken or lentils all priced at $13 and include the same side choices as the sandwiches.

Brookland Pint is open 5 p.m.-2 a.m. Sunday through Thursday and 5 p.m.-3 a.m. Friday and Saturday. Eventually, they hope to open for lunch and weekend brunch. If you go, you have to look for it since there is no sign other than the frosted windows (at least not yet when we visited).