Turtles and Guardians Hold Off Newcomers 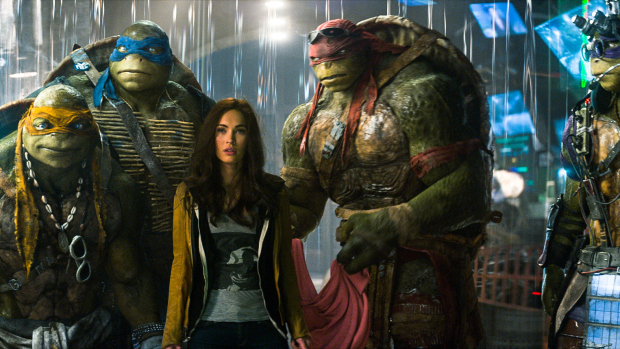 While it debuted towards the lower end of expectations, 20th Century Fox’s Let’s Be Cops was the weekend’s top new release with a third place take of $17.81 million. Given its Wednesday release date, it was impressive that the action-comedy topped both The Expendables 3 and The Giver over the weekend. Let’s Be Cops is also performing well with its low production cost in mind. Let’s Be Cops has grossed $26.22 million through five days of release. Let’s Be Cops didn’t get rave reviews, but will still have a solid chance of holding up well going forward due in part to the lack of new comedies entering the marketplace over the next several weeks.

Lionsgate Entertainment’s The Expendables 3 landed in fourth place with a disappointing debut of $15.88 million. The third installment of the ensemble action franchise starring Sylvester Stallone opened below its already scaled back expectations and 44.5 percent below the $28.59 million start of 2012’s The Expendables 2. In addition to moviegoers clearly growing tired of the franchise, The Expendables 3 also appears to have been hurt by having been pirated online prior to its release.

The Giver rounded out the weekend’s top five with a debut of $12.31 million. The young adult sci-fi adaptation from The Weinstein Company opened on the lower end of pre-release expectations.

Holdovers Into the Storm and The Hundred-Foot Journey claimed sixth and seventh place with takes of $7.89 million and $7.18 million respectively. Warner Bros. Pictures’ Into the Storm was down a significant 55 percent from the previous weekend and has grossed $31.51 million in 10 days. Disney Entertainment’s The Hundred-Foot Journey was down 35 percent and has grossed $23.69 million over the same 10-day span. Both films are performing in line with their respective pre-release expectations thus far.

In limited release, Boyhood took in $1.99 million from 771 locations to place in eleventh among all films, while Magic in the Moonlight took in $1.79 million from 964 locations to finish in 14th place. IFC Films’ Boyhood has grossed an impressive $13.64 million to date, while Sony Pictures Classics’ Magic in the Moonlight has grossed a soft $4.62 million so far.