Priest Pays for the Sins of Others in Calvary

In Calvary, Father James is a good priest who is faced with sinister and troubling circumstances brought about by a mysterious member of his parish. Although he continues to comfort his own fragile daughter and reach out to help members of his church with their various scurrilous moral — and often comic — problems, he feels sinister and troubling forces closing in, and begins to wonder if he will have the courage to face his own personal Calvary. 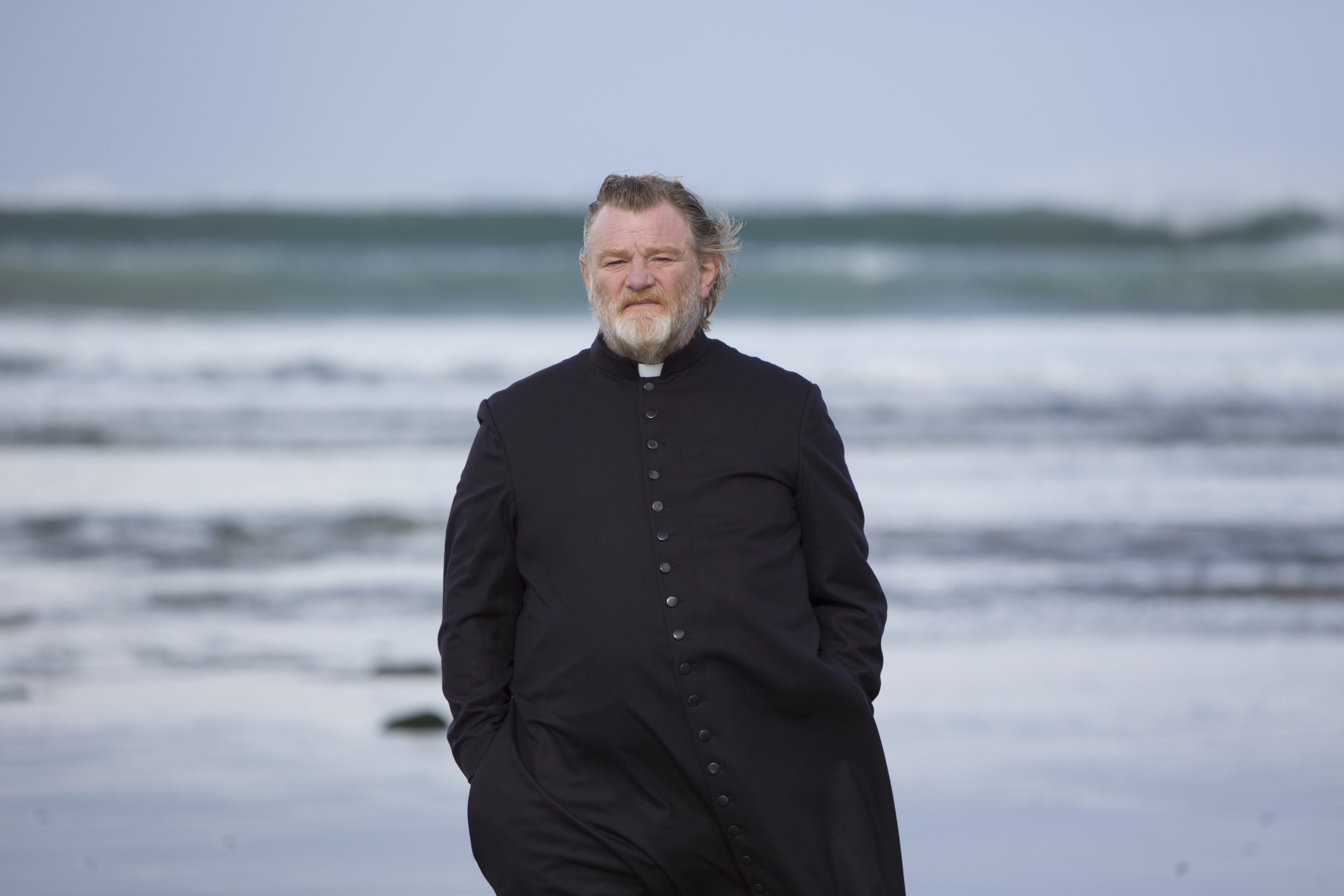 Father James (Brandon Gleeson) walks along an Irish beach were a parishioner plans to kill him for sins of a long-dead priest in Calvary.
(Photo: Fox Searchlight Studios)

In the midst of confession, a man tells good-hearted Father James (Brendan Gleeson) he was repeatedly raped as a boy by a priest. That priest has long since died, and although the man acknowledges that Father James is a good man, he tells the priest to settle his affairs since the confessor plans to kill the Father on the beach a week from Sunday anyway, to make the church atone for its sins, to draw attention to the blight of priestly abuse. Thus begins a sort of detective story.

The remote Irish village where Father James tends his restless flock seems surrounded by a crown of thorns, each soul within suffering in his or her own way. Over the next seven days, the priest sets out to find who wants him dead, and finds there are many people with grievances about the failings of Catholicism, none necessarily directed at him personally. He moves through his doubt-ridden community making amends and meeting with the various suspects who seem to be everywhere in the small town – from a caustic, agnostic, opinionated doctor to a guilt-ridden financial speculator with a “business proposition” for the priest, to a jealous husband and a cheating boyfriend who do not wish to be judged.

Father James is aware of his own limitations and failings. A widower and recovering alcoholic with an anxious adult daughter Fiona (Kelly Reilly) from before he entered the priesthood who longs for the fatherly attention she never received as a child and who arrives fresh off a botched suicide attempt that has left her very much alive, if shell-shocked. Her presence becomes a kind of catharsis for the priest, both as a Father and as a father.

As the title implies, Father James, presumably en route to his own execution, goes about his daily rounds administering last rites to a young man who dies in a car wreck, dispensing advice to people who have lost their faith, delivering groceries to an elderly shut-in who reads books about Hitler and listens to Hoagy Carmichael records. Between interracial adultery, coke sniffing in the pub toilet and an act of violence that burns down the church, the priest sees every sin in the book.

The bearish priest experiences a passion of the Christian variety, much of which involves his effort to shepherd a highly dysfunctional flock: butcher Jack Brennan (Chris O’Dowd) beats his wife Veronica (Orla O’Rourke), who’s sleeping with the local car mechanic Simon (Isaach de Bankolé) and doing cocaine with the cynical doctor Frank Harte (Aidan Gillen). The pompous, wealthy, drunk Michael Fitzgerald (Dylan Moran) tries, like Satan in the desert, to tantalize the priest with riches. Sex-starved Milo Herlihy (Killian Scott) wants to join the army so he can kill. And former student, Freddy Joyce (Gleeson’s son, Domhnall), who grew up to be a serial-killer and cannibal and claims that in the act of murder, the killer becomes God.

Yet, with the Sunday showdown rapidly approaching, the priest finds himself confronting not only the limits of modern faith and his own impending mortality, but also realizing his strength in the lost arts of grace, forgiveness and humility.

Calvary is less about the church and its problems than it is about one man’s faith in the wilderness, as it were, and how it is severely tested. And yet for all that, it’s a comedy, sort of. Gleeson is remarkable in one of the best roles for one of the finest character actors around. This is one of the best films of the summer. Rated R. Opens Aug. 1, 2014 in limited release, Aug. 8 in the DMV.