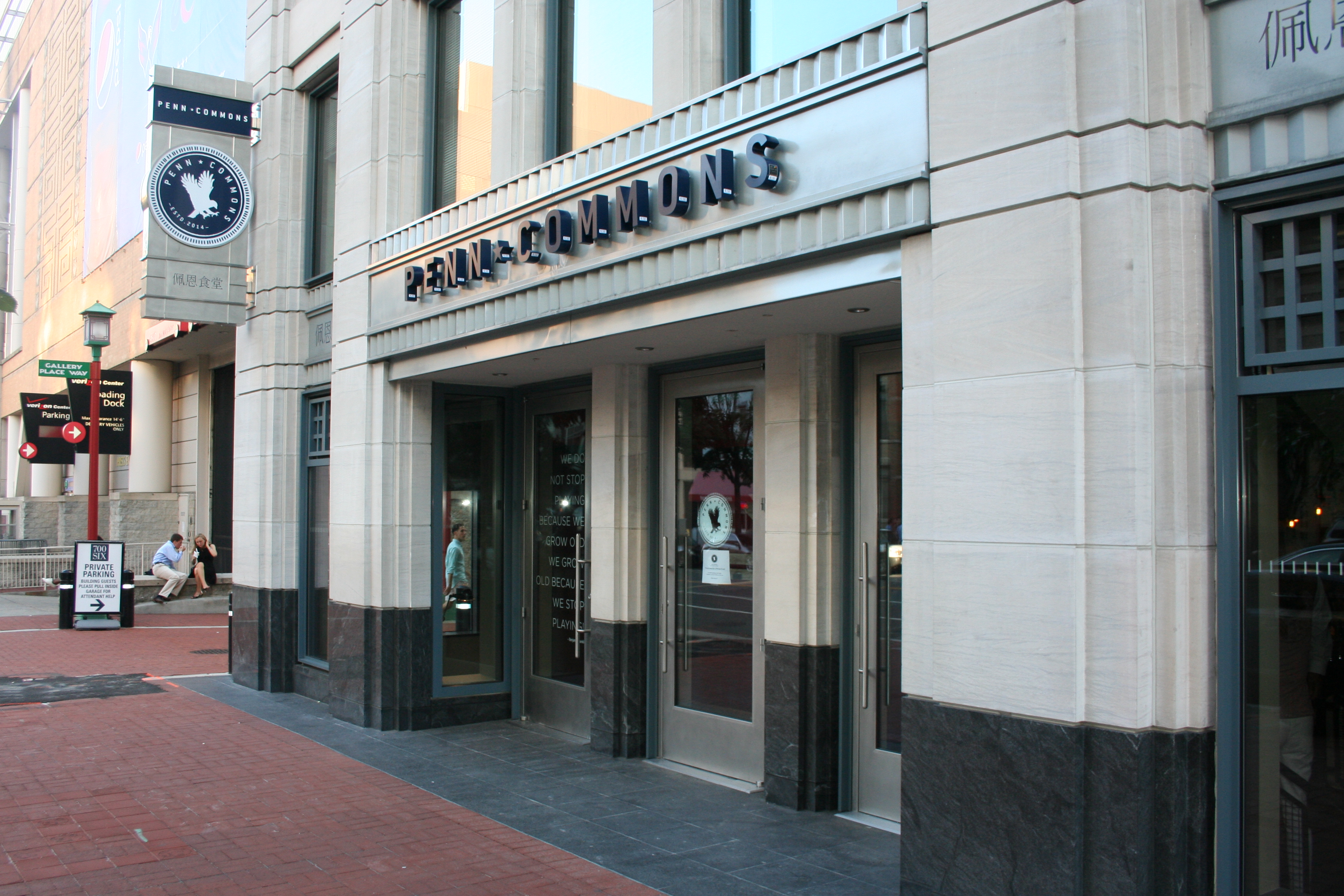 During a preview party July 26, DC on Heels got a peek at the restaurant and menu. The décor is dark wood, steel and brown leathers. The restaurant has an industrial vibe with exposed duct work, a cement floor and light bulbs. A sepia tone mural on the back wall features presidents playing sports.

Chef and partner Jeff Tunks sat down for a chat and told us that the restaurant was supposed to open as a beer-centric eatery called Townhouse Kitchen & Bar, but the owners went bankrupt three weeks before they could open. Tunks said the lights, banquettes and beer taps were already installed. “We saved a lot of money,” he told DC on Heels. “Basically, it’s what Townhouse was going to be. We just came in and put our fingerprint on it – finishes, votives, etc.”

At 10 p.m. nightly (9 p.m. on Sunday), the farm bell rings for a homey, family-style meals served at a communal table for $12. Monday’s meal includes chicken parmigiana, spaghetti, Caesar salad and garlic bread; Tuesday is a six buck chuck burger, fries and a Pabst Blue Ribbon beer for two; Wednesday is chicken fried steak and cream gravy, mashed potatoes and Monday’s green beans; Thursday is a sausage fest with a platter of assorted grilled sausages, beer mustard, saurkraut, a pretzel baquette and potato salad; Friday is pupusas with all the fixings; Saturday is huevos rancheros; and Sunday is fried chicken, macaroni and cheese, and collard greens.

End the night with a dessert like a root beer float from BTS, three kinds of sundaes, Boston cream pie with salted caramel sauce, mini oatmeal cookie pies with blueberries and lemon custard or Nutella cream puffs. There’s also a spiked float for the adults.

The Oval Room, 800 Connecticut Ave. NW, will reopen Aug. 4 after closing for renovations on June 30. The restaurant, which originally opened in October 1994, has undergone a million dollar renovation changing both the menu direction and the design scheme. 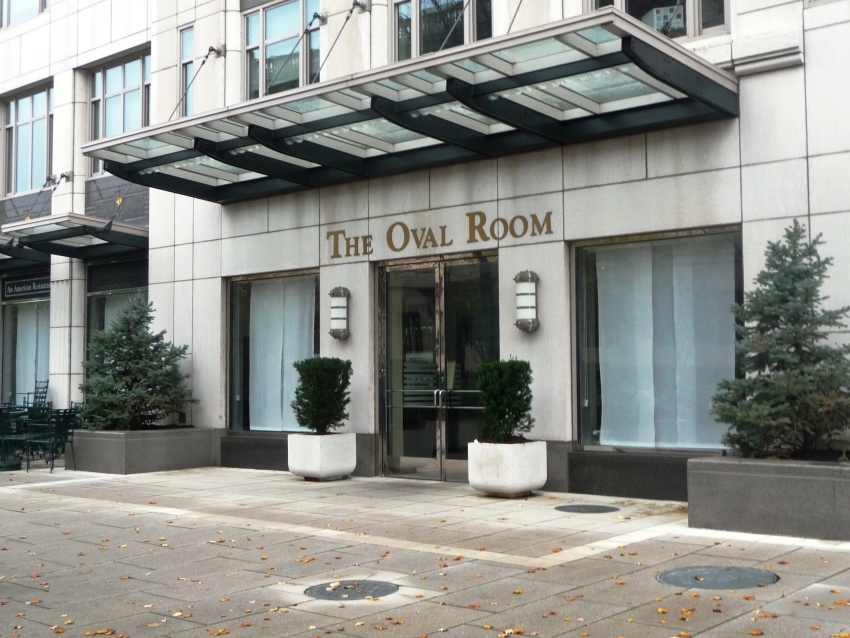 The Oval Room reopens Monday after being closed a month to remodel and rework the menu. (Photo: Cityseeker)

Executive chef Tony Conte will introduce a new a la carte menu as well as a four-course, prix fixe menu for $60 or $90 with complementing wine pairings, selected by the Oval Room’s new sommelier Alek Milford. The restaurant will also offer a $20 lunch special at the bar special that includes one glass of wine or non-alcoholic beverage, an entrée and sorbet. A new happy hour from 5-6:30 p.m. Monday-Friday will offer 20 percent off drinks at the bar or on the 35-seat patio, which also has new furnishings.

Conte’s new dishes will range in price from $10 to $36, and the menu is now organized into raw bar offerings, appetizers, entrees and sides. Raw bar choices include fluke with coconut, lime, togarashi and breakfast radish, and tuna with bonito ranch with ginger dressing and spicy crispy tapioca. Appetizers include dishes such as burrata with shaved summer vegetable salad and jalapeno vinaigrette, and gently smoked sweetbreads with brown butter, licorice and fennel-green mango salad. New entrees include kazu marinated duck with hazelnut-nastruim crumbs, carrots, turnips and duck jus; spice rubbed lamb rack with blackened eggplant, arugula and millet; and lobster with saffron ginger broth, market beans and potato gnocchi. Sides on the summer menu include fried Chinese eggplant and glazed squash.

“Oval Room is the boutique, fine dining experience within Knightsbridge Restaurant Group and this modern American restaurant is also celebrating its 20th birthday this October so it great timing for a fresh new direction,” said owner Ashok Bajaj in a press release. “Guests will enjoy an inventive menu that Tony has been working on for the last six months. The cooking technique is the same, but his dishes will be simpler and lighter.”

Also new is Simon Stilwell, who is moving from sister restaurant Rasika to be the opening general manager.

August is National Coffee Month and Mio Restaurant is celebrating with four a la carte specials that showcase the bean. Each of the three dishes and one cocktail incorporate Mio’s premium blend of 100 percent Arabica sundried coffee beans grown exclusively for the restaurant in Puerto Rico. 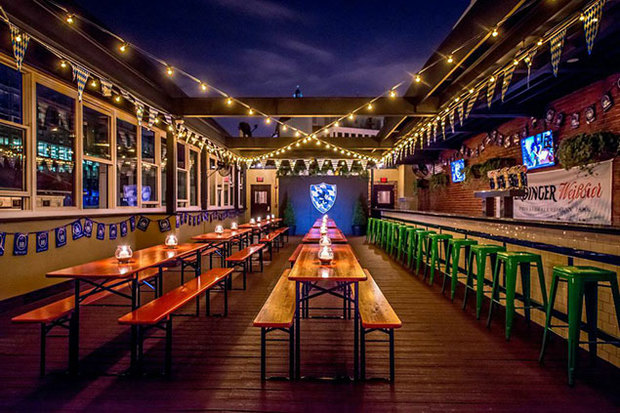 The restaurant’s décor is Bavarian with long wooden picnic benches and German regalia, plus a foosball table. At the bar, there are 16 taps devoted solely to German beers including liters and half-liters of Warsteiner Dunkel, Hofbrau Hefeweizen and Schöfferhofer Grapefruit. Beers in cans and bottles include craft domestics. House beer-tails include a mix of grapefruit, hefeweizen and house-infused vanilla vodka. A full bar is available, but you’ll only find a single brand of each spirit such as Tito’s vodka and Patrón tequila.

There’s no kitchen to speak so initially, Shake Shack downstairs will be your only option if you don’t want a soft pretzel. Eventually a cart on the top floor will offer Fells Point Meat’s brats and franks, and freshly shucked oysters.

Happy hour specials include $2 off all drinks from 4-7 p.m. Monday through Friday.

Sauf Haus will be open year-round. Plans include a retractable roof for the deck and warm drinks such as mulled wine for when the weather turns chilly. Sauf Haus opens at 4 p.m. daily. 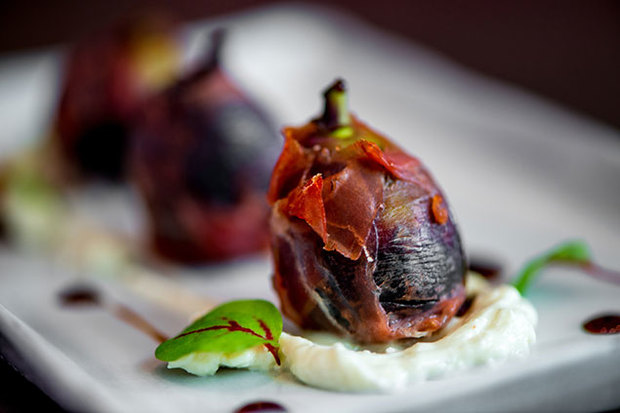 Pinea will open in September and feature a menu that will favor “contemporary regional European dishes with a focus on France, Italy and Spain,” according to a press release.

Popular flavor profiles from the region including citrus, fresh herbs such as lavender and rosemary and special olive oils will enhance local vegetables and seasonally varying meat and seafood. Other menu highlights include handmade pastas and housemade spice blends, along with fresh seafood like whole grilled Branzino. A portion of the menu will be dedicated to sharable dishes inspired by the Italian “Merenda” or afternoon snack. Offerings like roasted Serrano ham wrapped figs with blue cheese to “Pissaladiere” — caramelized onion, black olives, and boquerones—will be on the Merenda menu.

The restaurant’s beverage program will include wines from Southern European regions such as Campania, Valencia and Languedoc Roussillon as well as unique craft cocktails and beers.

“I think the strength of Pinea lies in the versatility we will be offering, the freshness of the ingredients and the bold, clean flavors that we will produce,” Koslow said in the press release. “Pinea will be a restaurant that serves imaginative, elegant food in a simple and approachable style. The overall experience will be harmonious.”

Toro Toro, located at 1300 I St. NW, recently debuted their On the Run Exec Express Lunch Buffet available Monday through Friday, from 11 a.m.-3 p.m. The lunch option is $28 and includes the choice of a soft drink, iced tea or lemonade. Guests can enjoy a chef’s daily offering of Pan Latin favorites along with a rotating selection of signature salads, ceviche and carved meats. Guests can make multiple trips to try the various dishes and the buffet must be ordered by the entire table.

Toro Toro is open for lunch Monday through Friday from 11 a.m.-3 p.m.