I Origins Pits Science Against Faith

I Origins tells the story of Ian Gray, a molecular biologist studying the evolution of the eye. He finds his work permeating his life after a brief encounter with an exotic young woman, who slips away from him. As his research continues with his lab partner Karen, they make a scientific discovery that has far reaching implications and complicates both his scientific and spiritual beliefs. Traveling half way around the world, he risks everything he has ever known to validate his theory. 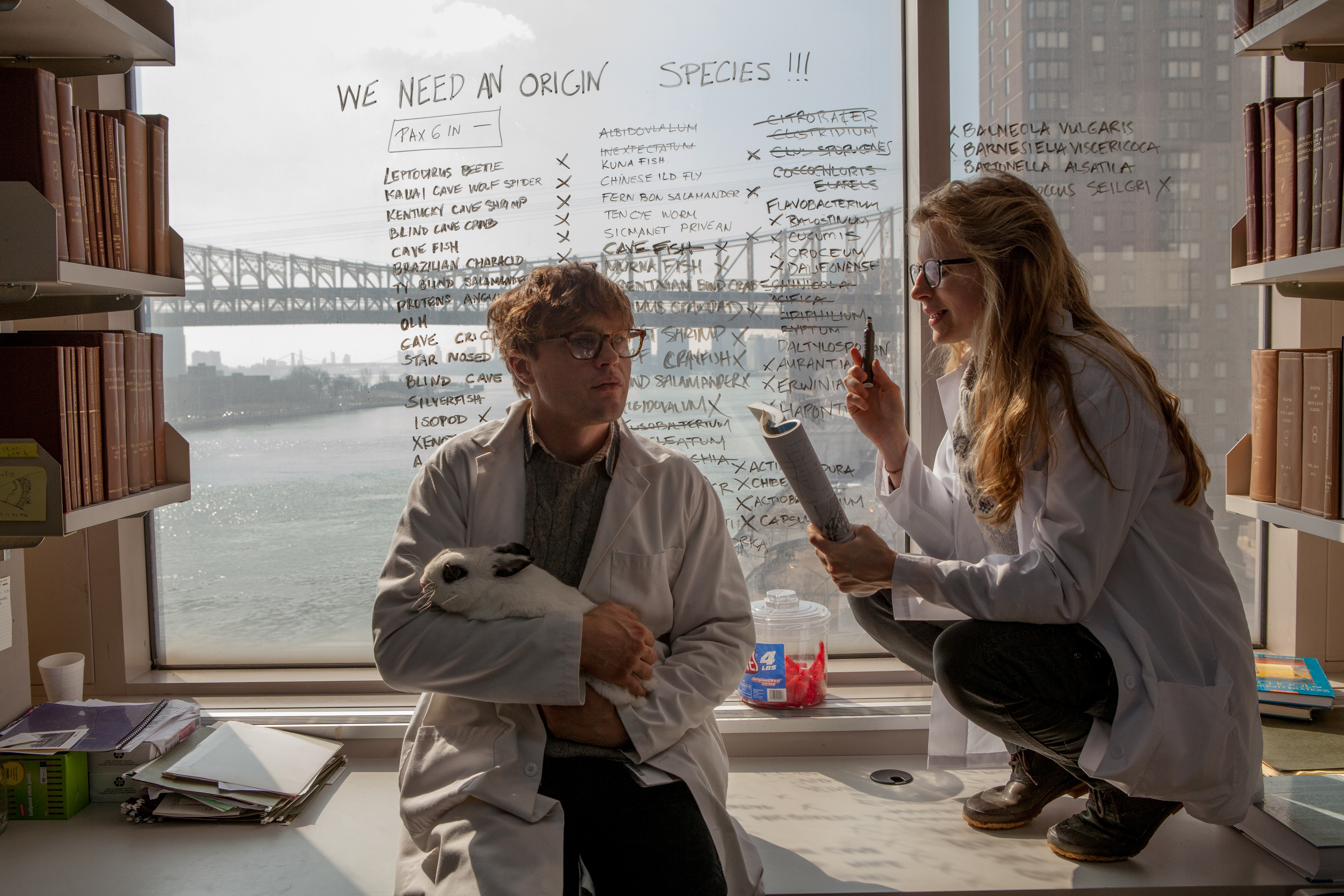 I Origins focuses on molecular biologist Ian Gray (Michael Pitt), a doctoral student and an atheist who believes only in things that he can prove scientifically. He constructs an elaborate experiment to prove conclusively that the human eye developed through evolution. It involves finding the gene responsible for the development of the eye and the most primitive, least complex organism that has that gene.

He believes in proof; he believes in data. He doesn’t believe in spirituality, which is guided by faith — the belief in something without evidence.

With the help of his undergraduate lab assistant Karen (Brit Marling), his research takes a new turn. She believes Ian’s work actually can be traced back to how our eyes first developed. They think that if they can prove the first blind worm ultimately acquired vision via evolution, it would prove that eyes had evolved naturally and therefore quash the religious “greater power” theories put forward by the advocates of intelligent design or creationism.

Although the movie’s premise is rooted in science, romance shakes Ian’s life up. Entirely oblivious to Karen’s infatuation with him, Ian meets a mysterious masked woman with magnificent eyes who he has sex with at a Halloween party, but after their brief encounter, she disappears before he can get her name. Despite only having pictures of her eyes, he finds her one afternoon when he notices that he keeps running into the number 11. Her eyes appear on a billboard when he decides to follow the number after buying a lottery ticket on Nov. 11 at 11:11 a.m. and get 11 cents change (he takes the No. 11 bus, gets off at 11th Avenue, and so on).

Eventually, he is able to track her down. An Argentine-French model, Sofi (Astrid Bergès-Frisbey) is Ian’s opposite: a deeply spiritual new ager who is convinced she has been reincarnated. With love for Sofi comes a radical doubt in science that upends Ian’s life and forces him to question his own convictions. He’s a man who’s addicted to proof, she’s not; she’s a spiritual woman who has the power to rearrange Ian completely and capsize everything he’s been working toward.

Ian and Sofi enjoy a whirlwind romance that ends tragically.

The story picks up seven years later. Ian and Karen are married, and they have a toddler who may have autism. The tests for their son eventually circle back to Ian’s work and Sofi’s memory. It also sparks another, and very different, round of research. The answer lies in the startling blue eyes of a New Delhi orphan named Salomina (Kashish). Do Salomina’s eyes speak of evolution, reincarnation or a random anomaly?

Writer-director Mike Cahills’ sophomore feature directorial effort following his widely acclaimed Another Earth fails to provide us with strong characters. As a result, Ian and Sofi come across as philosophical stereotypes. He’s a cold, closed-minded man who refuses to accept things that he can’t see or touch. She’s a warm, spiritual woman who acknowledges there could be more to existence than this one life. Karen is caught between the two, not doing a whole lot beyond moving the plot forward. Cahill is fond of shaky, handheld shots that are off-putting and distracting. His use of metaphors, especially those involving eyes, is heavy-handed and obvious. The final act of I Origins is its weakest, taking a long time to arrive at the expected resolution. Rated R. Opens July 18, 2014 in limited release. July 25, 2014 in the DMV.