“And So It Goes” Movie Review

And So It Goes Is Amusing but Forgettable

There are a million reasons not to like realtor Oren Little, and that’s just the way he likes it. Willfully obnoxious to anyone who might cross his path, he wants nothing more than to sell one last house and retire in peace and quiet — until his estranged son suddenly drops off a granddaughter he never knew existed and turns his life upside-down. Clueless about how to care for a sweet, abandoned nine-year-old, he pawns her off on his determined and lovable neighbor Leah and tries to resume his life uninterrupted. But little by little, Oren stubbornly learns to open his heart – to his family, to Leah and to life itself. 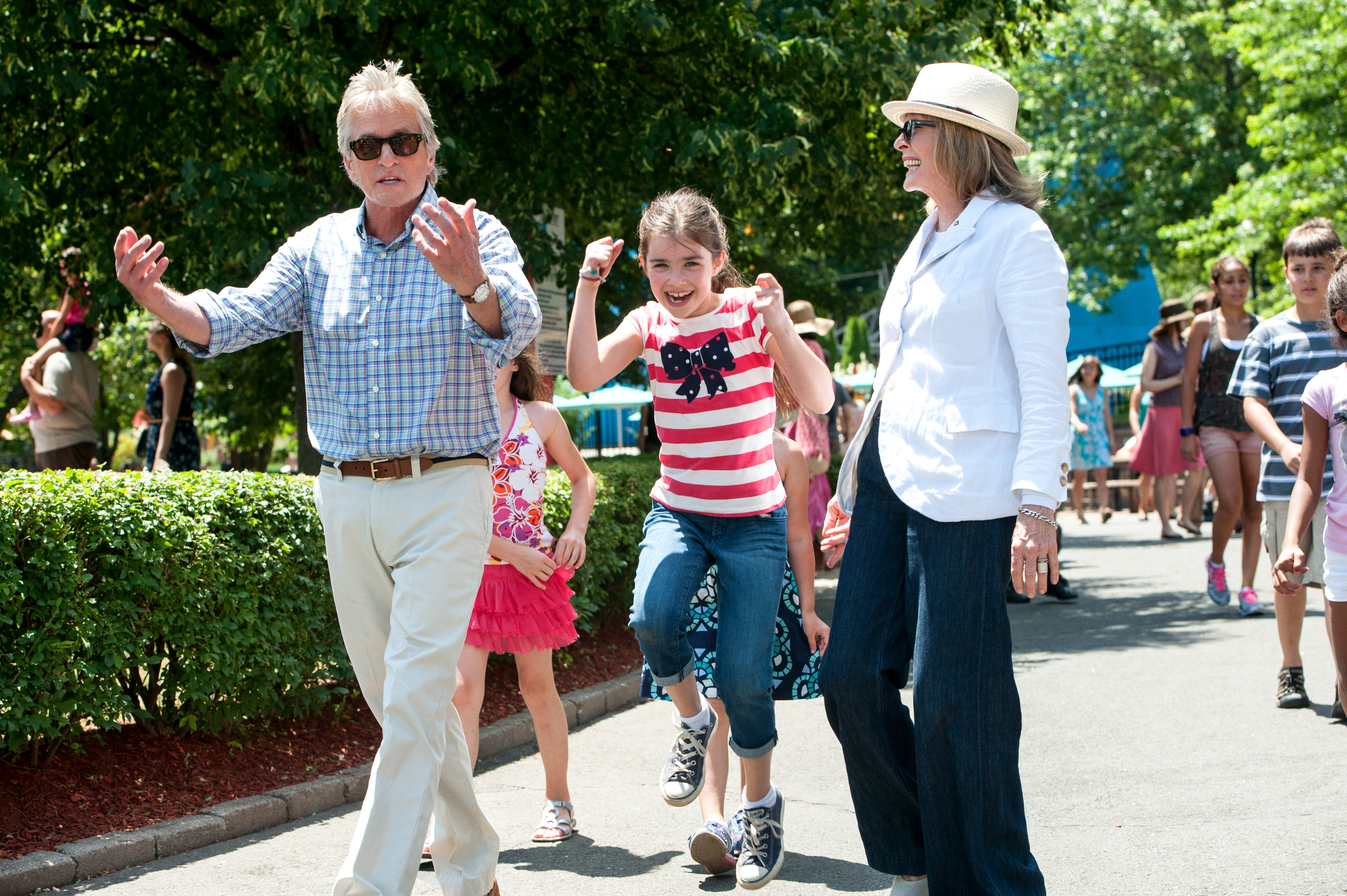 Michael Douglas, Sterling Jerins and Diane Keaton (l to r) enjoy an afternoon at an amusement park And So It Goes.
(Photo: Clay Enos/Clarius Entertainment)

Michael Douglas plays Oren Little, a real estate agent, widower and cranky old coot trying to sell his $8.6 million Bridgeport, Conn. mansion and retire to Vermont in And So It Goes, a romantic comedy from director Rob Reiner. Oren bides his time living in a cramped fourplex he owns. He takes up tenants’ parking spaces, snarls at the children, shoots dogs with a paintball gun for pooping on his lawn and switches out family photos in his house to match the race of prospective homebuyers — not always correctly.

Oren makes life hell for pretty much everyone he meets. When his estranged son (Scott Shepherd), an ex-junkie, has to serve a nine-month prison sentence, Oren is saddled with the 10-year-old granddaughter, Sarah (Sterling Jerins), he never knew he had — and doesn’t want to know.

Oren dumps Sarah off on next door neighbor Leah (Diane Keaton), a widow still recovering from her husband’s unexpected death, who is trying to remake herself into a lounge singer with a habit of bursting into tears during her performances. Leah takes the girl in, and Sarah calls her grandma.

At first, Oren is standoffish with Sarah, but she eventually starts to melt Oren’s heart and Leah sees another side of the man she thought she couldn’t stand. Eventually, the oldsters rediscover dating and Oren discovers he actually enjoys being a grandpa.

Reiner, who plays Leah’s pianist in a bad toupee, assembles a square rom-com meal, but it’s bland, by-the-numbers and not particularly memorable. The slapstick is awful and the pathos isn’t much better. Douglas essentially reprises his role from last year’s Last Vegas, while Keaton resurrects her feisty role in last year’s AARP-approved romantic comedy The Big Wedding. Will Oren and Leah find late-life love? Will they learn to grandparent? Will father and son reunite? The questions are as suspenseful as an episode of Matlock, and And So It Goes joins the recent spate of forgettable December-December romances. Rated PG-13. Opens July 25, 2014.