Shake Shack is opening its fourth D.C. location in Union Station at 10:30 a.m. on Monday. Shake Shack’s newest joint will be a two-story eatery in the former America restaurant space in West Hall. 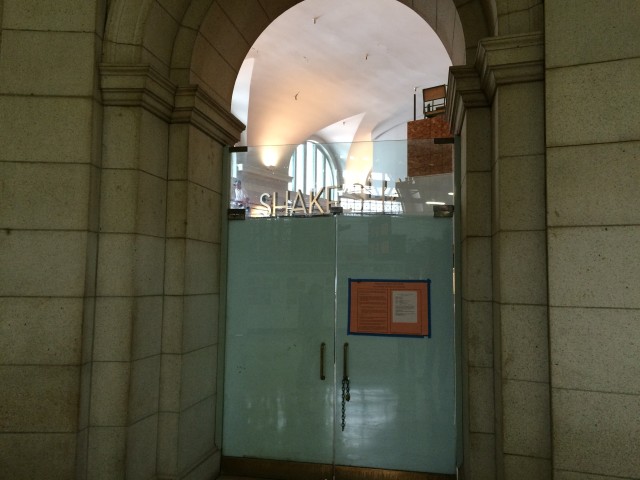 Like its siblings on F Street in Penn Quarter, 18th Street in Dupont Circle and at Nationals Park, Union Station’s menu has all the Shake Shack classics from 100 percent all-natural Angus beef burgers, griddled flat-top dogs and hand-cut fries to fresh-made frozen custard, wine and Brooklyn Brewery ShackMeister Ale. The Union Station location will have two specialty frozen custard concretes only available there that feature local bakers: the Busy Bee with vanilla custard, strawberry puree and a Baked & Wired Bee Sting bar with sliced almonds and honey; and the Beaux-Arts Banana with vanilla custard, caramel sauce, banana and graham crackers from Pollystyle. Shake Shack will donate 5 percent of sales from the Beaux-Arts Banana concrete to the non-profit Casey Trees, devoted to restoring, enhancing, and protecting the tree canopy of D.C. The Dupont Circle Shack’s popular Washington Monu-Mint with chocolate custard, minted marshmallow sauce and chocolate truffle cookie dough will also be available at Union Station.

The Union Station location was designed to match the 1907 Beaux Arts style building. It will feature a custom planter and trellis in one of the neo-classical niches in the restaurant’s waiting area. In keeping with Shake Shack’s eco-responsibility commitment, the Union Station location is constructed with recycled and sustainable materials and features energy-efficient kitchen equipment and lighting. Chairs and booths are made from lumber certified by the Forest Stewardship Council and tabletops are made from reclaimed bowling alley lanes.

Last August, when Shake Shack announced the Union Station restaurant, it also said it would open a stand-along restaurant in Tysons Corner beside Tysons Corner Center mall. It was supposed to open this summer also, but no word yet on when it will open.

Good Stuff Eatery, the burger joint owned by Chef Spike Mendelsohn and his family with locations on Capitol Hill, Georgetown and Crystal City, will open its fourth location at 108 S. 18th St. in Philadelphia’s Rittenhouse Square neighborhood at 11 a.m. on Tuesday. It is in a former Japanese restaurant at 18th and Chestnut Streets. 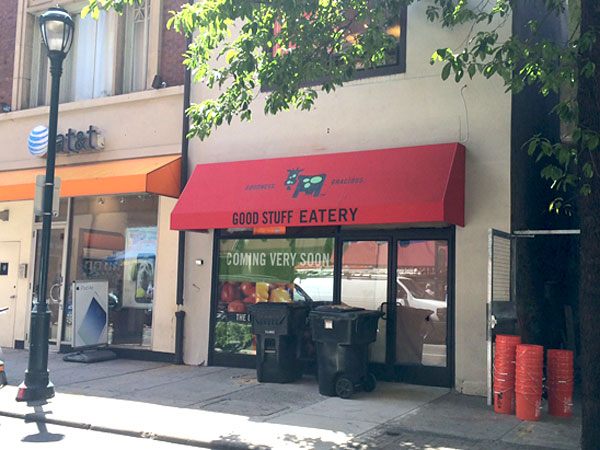 All Good Stuff Eateries look different, and Mendelsohn says the 3,000 square-foot Philadelphia restaurant will be a “unique ode to Philly” with graphics and quotes from the city’s history.

Good Stuff Eatery, the brainchild of restaurateur Cathy Mendelsohn, was inspired by her father Sunny Nakis. Nakis famously served his family juicy hamburgers wrapped in wax paper. As a tribute to him, and his favorite saying, “Now that’s Good Stuff,” the restaurant wraps their hamburgers in wax paper.

Zengo, the Latin-Asian inspired restaurant located at 781 7th St. NW, will unveil its next “Test Kitchen” series beginning July 1 to Sept. 30 with a nod to Brazilian fare. Every few months the Zengo chefs research and develop new recipes featuring the cuisine and spirits of one Latin and one Asian country. The result is a specialty menu featuring small plates and cocktails that feature some of the bold flavors and techniques from each region. The specials are available during dinner service beginning at 5 p.m.

To complement the bold dishes, there will be cocktails with the flavorful fruits, spices and spirits of China and Brazil priced from $11 to $12. The monte alegre is made with pitu cachaca, elderflower liqueur, Campari, fresh lychee, fresh lime juice and champagne, and the strawberry chipiroshka made with vodka, Thai basil simple syrup, fresh lime, fresh strawberry puree, fresh lime juice, and ginger ale, which is a twist on a Brazilian classic.

West End Wednesday, the progressive dinner series showcasing the West End neighborhood’s Blue Duck Tavern, Marcel’s, Ris and Westend Bistro all in one evening will conclude on July 30. The series launched in April. 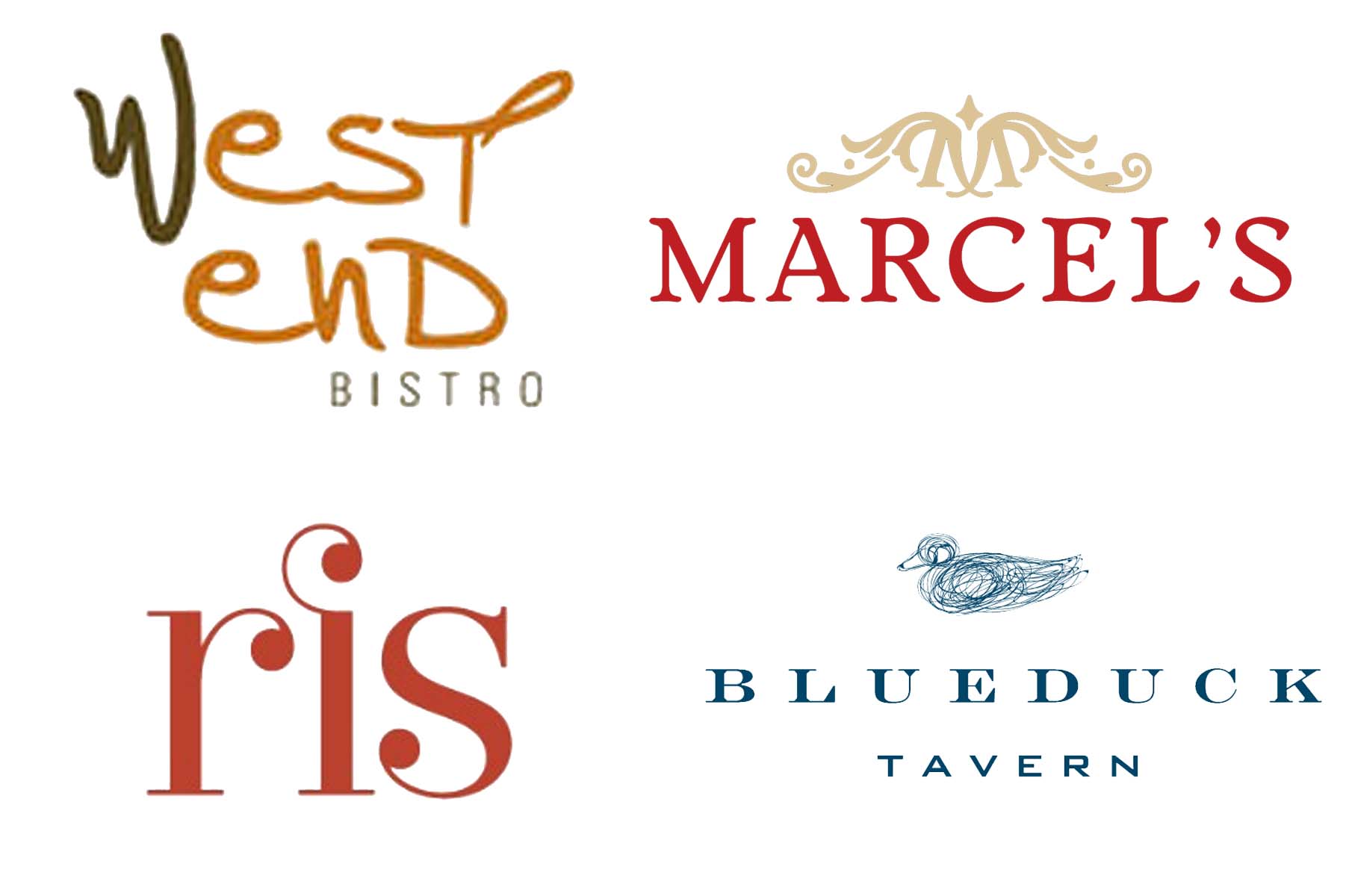 This Wednesday night walkable dinner experience begins at 6:30 p.m. The participating chefs, sommeliers and mixologists showcase their skills to create a memorable dinner for 12 guests to dine together at a communal table within each of the four restaurants.

Tickets must be purchased at www.giftrocker/westendwednesdays. The progressive dinner costs $100 per person. Meals features specialty small plates that include an hors d’oeurve, a seafood appetizer, a meat selection and a dessert. It includes pairings of wine, beer or specialty cocktails at each stop along the dining adventure, and guests will be escorted to each location by one of the hosting restaurant staff members.

The restaurant starting place and lineup rotates as does the special monthly menu for West End Wednesday.

The Fainting Goat, 1330 U St. NW, is fusing the art and culinary worlds with new “Meet the Artist” happy hour from 6-8 p.m. on the third Thursday of the month. 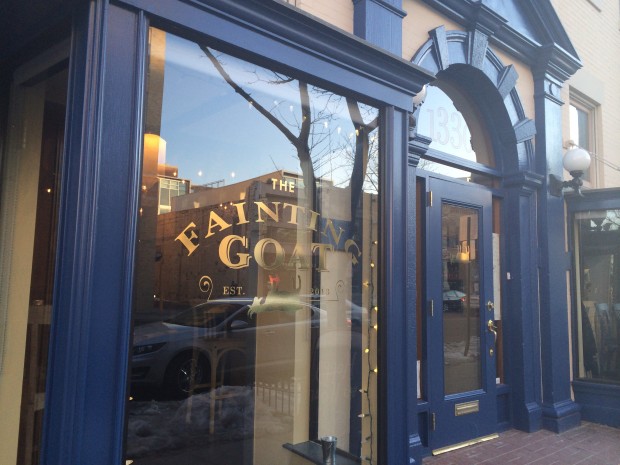 The Fainting Goat on U Street will host a “Meet the Artist” happy hour the third Thursday of every month. (Photo: Girl Meets Food)

The local restaurant and bar will showcase the works of area artists while inviting the community to meet the artists in person over specially priced drinks and complimentary hors d’oeuvres. The happy hour kicked off last week with D.C.-based artist Amanda Kates. Guests can peruse works from the month’s featured artist while enjoying $5 specialty craft punches, glasses of Prosecco, red and white wine, and DC Brau drafts, as well as complimentary cheese and charcuterie boards. Artwork will be available for purchase all evening, continuing through the month until the next artist’s exhibition.

The Fainting Goat’s “Meet the Artist” happy hours are free and open to the public. A monthly schedule of artist exhibitions will consistently be updated on the restaurant’s website.

Jose Adorno has been promoted to chef de cuisine at Graffiato, 707 6th St. NW. Adorno joined Mike Isabella’s team a year ago to oversee private events and catering for Kapnos, G and Graffiato.

José Adorno is the new chef at Graffiato. (Photo: Graffiato)

In addition to keeping Graffiato classics like the sweet corn agnolotti and Jersey Shore pizza fresh, Adorno is adding his own touch to the menu with dishes like pan seared sea bream with spaghetti squash.

“This is a really exciting kitchen to work in,” said Adorno, “Graffiato has a lot of classics, like the hand cut spaghetti and the gnocchi, that aren’t going anywhere, but there is also room for creativity, and Mike has given me and the team space to try new things. I’ve been privileged to work for a number of really incredible chefs and with a number of different cuisines, and I hope to show that range on the menu at Graffiato.”

Before moving to D.C., Adorno worked for several notable Philadelphia restaurants and chefs, and had his own catering company. Between fall 2011 and spring 2013, he served as chef de cuisine at Sbraga, which he helped open. Prior to that, he worked as a sous chef for Starr Catering; spent two years a sous chef at two of Chef Jose Garces’ restaurants, Distrito and Tinto; and one year at Rae. Adorno earned a bachelor of science in culinary arts from The Restaurant School of Philadelphia.

We Love Our Fans