This is Pride weekend in the DMV with the area’s gay, lesbian, bisexual and transgender residents celebrating their pride with events all week culminating this weekend. For others, there is a reggae concert at the Yards Park and free canoeing at the Ballpark Boathouse tonight; a fashion truck rally at the Yards Park on Saturday; and an arts, crafts and wine festival in Annapolis on Saturday and Sunday.

Capital Pride, the city’s gay, lesbian, bisexual and transgender pride celebration has been going on all week, but culminates this weekend with a full slate of activities ranging from an opening party tonight at Dock 5 at Union Market from 9 p.m.-2 a.m., to a Shabbat tonight from 7:30-8:30 p.m. at the Sixth & I Street Synagogue to a historic walking tour of Dupont starting at 2 p.m. on Saturday across from the Dupont Circle metro at Q and 20th Streets NW. The most popular events are the pride in the Dupont, Logan Circle and 14th Street NW neighborhoods on Saturday and the street festival along Pennsylvania Avenue in front of the U.S. Capitol on Sunday (see details on both below).

Through June 8 at various times and locations around the city. Some events charge admission, but many are free. See the link above for a full schedule of events.

A band peforms at Rockin’ on the River in 2013. (Photo: Capital Riverfront)

Rockin’ on the Riverfront

Every Friday night this summer, enjoy fantastic bands with a river view at Rockin’ on the Riverfront. Family-friendly lyrics and grassy open space make this a fun, friendly event for adults and kids alike. Tonight, the park jams with the reggae sounds of Sam O! Concerts continue ever Friday except July 4 through Sept. 12. Next week Texas Chainsaw Horns will perform followed by Sin Miedo on June 20 and the D.C. Jazz Festival on June 27.

Paddle Nights on the Anacostia River 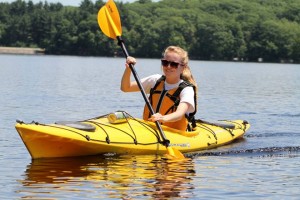 A boater paddles on the Anacostia. (Photo: Ballpark Boathouse)

June 6 from 5-7:30 p.m. at the Ballpark Boathouse, First Street and Potomac Avenues SE. Admission is FREE, but on a first come, first served basis! 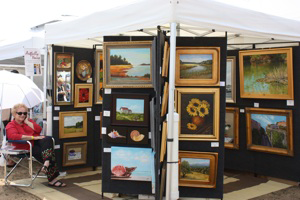 The Annapolis Arts, Crafts and Wine Festival is a weekend of fine, juried arts and handmade crafts, and wine tastings. It is a two-day, outdoor celebration of the arts and Maryland’s fruit of the vine in Annapolis. View the juried works of over 200 of the region’s best artists and craftsmen employing a variety of media including painting, sculpture, ceramics, digital art, mixed media, printmaking, jewelry, fiber art, glass, wood, leather, metal and photography. Sample wines from more than 25 Maryland wineries in the wine pavilions. Purchase a bottle of wine and relax while listening to smooth jazz all day long. Take the children, too, for activities in the Kids’ Art area including theatrical, dance and musical performances on stage.

The Hole Truth: A History of the Doughnut 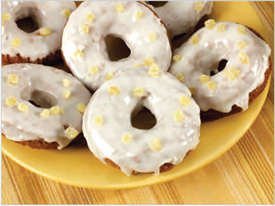 In celebration of National Doughnut Day, the Smithsonian hosts food historian, award-winning cooking instructor, food writer and former chef Michael Krondl, who serves up an entertaining introduction to the popular pastry’s social history. The doughnut has popped up in surprising ways through the ages. For example, it played a role not only in the traditional prelude to Lent, but in Hanukkah and Ramadan rituals; it found its way to American doughboys in the trenches of World War I; and Red Cross Clubmobiles, equipped with built-in doughnut machines, served fresh doughnuts to servicemen during World War II—along with music, magazines, candy and other comforts of home. The program ends with a doughnut tasting by Astro Doughnuts & Fried Chicken. Copies of Krondl’s book, The Donut: History, Recipes, and Lore from Boston to Berlin, are available for signing. 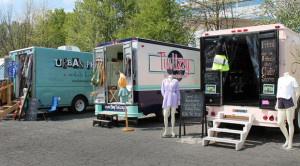 Fashion trucks will be selling their wares at The Yard Park. (Photo: Capital Riverfront)

Fashion trucks are becoming the new food trucks. A bevy of boutiques on wheels (and some additional pop-up storefronts) will set up shop at The Yards for a day of shopping during Fashion Yards. You will find everything from vintage jewels and threads to $10-and-under dresses to even Jimmy Choos! Fashion Trucks include Arden Reed, Street Boutique, Botique Saivita – the Flower Truck, The Thread Truck, Pichardo Boutique, Nollypop Boutique, The G Truck, Tin Lizzy, Urban Pearl, Style Ride Botique and many more! The event will also include a DJ; live styling sessions; snacks from TaKorean, Ice Cream Jubilee, and Honest Tea; cocktails by Osteria Morini; and complimentary spa treatments from Aura Spa and Vida Fitness. 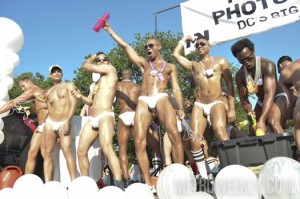 Models in only their underwear ride on a float in the 2013 Capital Pride Parade. (Photo: Metro Weekly)

The 39th annual Capital Pride Parade. The parade steps off at 22nd and P Streets NW and travels 1.5 miles through Dupont Circle and 17th Street, passes by the Logan Circle neighborhood and ends along the revitalized 14th Street corridor at S Street. The parade attracts over 150,000 spectators annually and includes more than 170 contingents — floats, vehicles, walkers, entertainment and much more. The review stand is located at 15th and P Streets NW; another announcement stand is just east of Dupont Circle on New Hampshire Avenue at Q Street. A sign language interpreter will be available at the 15th and P Streets review stand. The first contingent is expected to reach the review stand before 5 p.m. and the final contingent should pass the review stand at by 7:15 p.m. An Armed Forces Color Guard present and retire the colors. The grand marshal is former Minnesota Vikings punter Chris Kluwe. 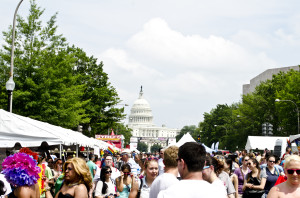 Visitor’s to the Capital Pride Street Festival in 2013 fill Pennsylvania Avenue in front of the Capitol. (Photo: Tim Evanson/Flickr)

The Capital Pride Street Festival continues along historic Pennsylvania Avenue NW. The U.S. Capitol has served as the iconic backdrop to the Capitol Stage for hundreds of performances from local and national entertainers, politicians, and activists for 18 years. Since its inception, the festival has grown and evolved, and this year is no exception. The festival is D.C.’s largest a one-day event with over 200,000 visitors, almost 300 sponsor and vendor exhibits, three stages, two beverage gardens, a family area and numerous food vendors. Entertainment this year includes DJs, local performers and headliners Betty Who, Bonnie McKee, Karmin, DJ Cassidy and Rita Ora.