A Million Ways to Die in the West Misfires

Seth MacFarlane directs, produces, co-writes and plays cowardly sheep farmer Albert Stark in A Million Ways to Die in the West. After Albert backs out of a gunfight, his gold digger girlfriend leaves him for another man. When a mysterious and beautiful woman rides into town, she helps him find his courage and they begin to fall in love. But when her husband, a notorious outlaw, arrives seeking revenge, the farmer must put his newfound courage to the test. 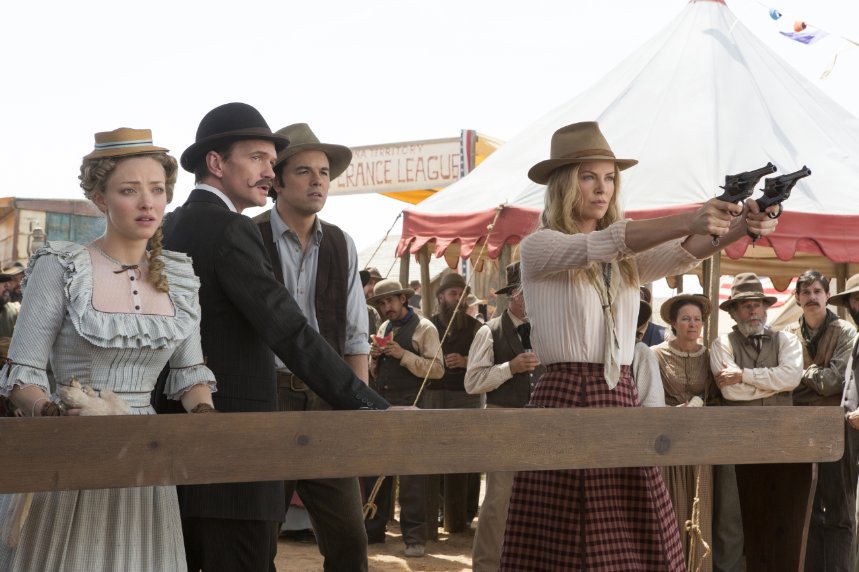 Set in 1882, MacFarlane plays Albert Stark, a cowardly sheep farmer in Old Stump, Ariz., who’s trying to figure out how to escape the godforsaken frontier that seems to be trying to kill him and everyone else in it. Joining Albert in his quest are his best friend, Edward (Giovanni Ribisi), the unfailingly nice, extraordinarily naive town shoe repairman and virgin, and Ruth (Sarah Silverman), Edward’s girlfriend who is just as chaste with him as she is whorish with her brothel clients.

In the opening scene, Albert talks his way out of a gun fight over his sheep eating his opponent’s fields by promising to pay the varmint the money. But Albert’s girlfriend, the pretty Louise (Amanda Seyfried), dumps him after he backs out of the gunfight, and falls for Foy (Neil Patrick Harris), a successful, but arrogant, businessman. Foy runs the town’s mustachery and sports a curlicue lip toupee.

But when a mysterious and beautiful gunslinger named Anna (Charlize Theron) rides into town, she helps Albert begin to find his courage and they start to fall in unexpected love after he saves her in a bar brawl.

As Anna teaches Albert marksmanship for his impending showdown with Foy, Anna becomes attracted to the sheep herder.

However, Anna is married to Clinch Leatherwood (Liam Neeson), a notorious outlaw whose name strikes fear into the hearts of the citizenry. He eventually comes to town seeking revenge on the man whom he thinks has made a dishonest woman of his wife. Reluctantly, Albert must now put his newfound courage to the test in a one-man-left-standing gunfight that will earn him Anna’s hand and long-denied respect in the Wild West…or another unmarked grave forgotten in the annals of history.