After a disastrous blind date, single parents Lauren Reynolds and Jim Friedman agree on only one thing: they never want to see each other again. But when they each sign up separately for a fabulous family vacation with their kids, they are all stuck sharing a suite at a luxurious African safari resort for a week in Blended. While at the retreat for “blended” families, their attraction grows as their respective children benefit from the burgeoning relationship. 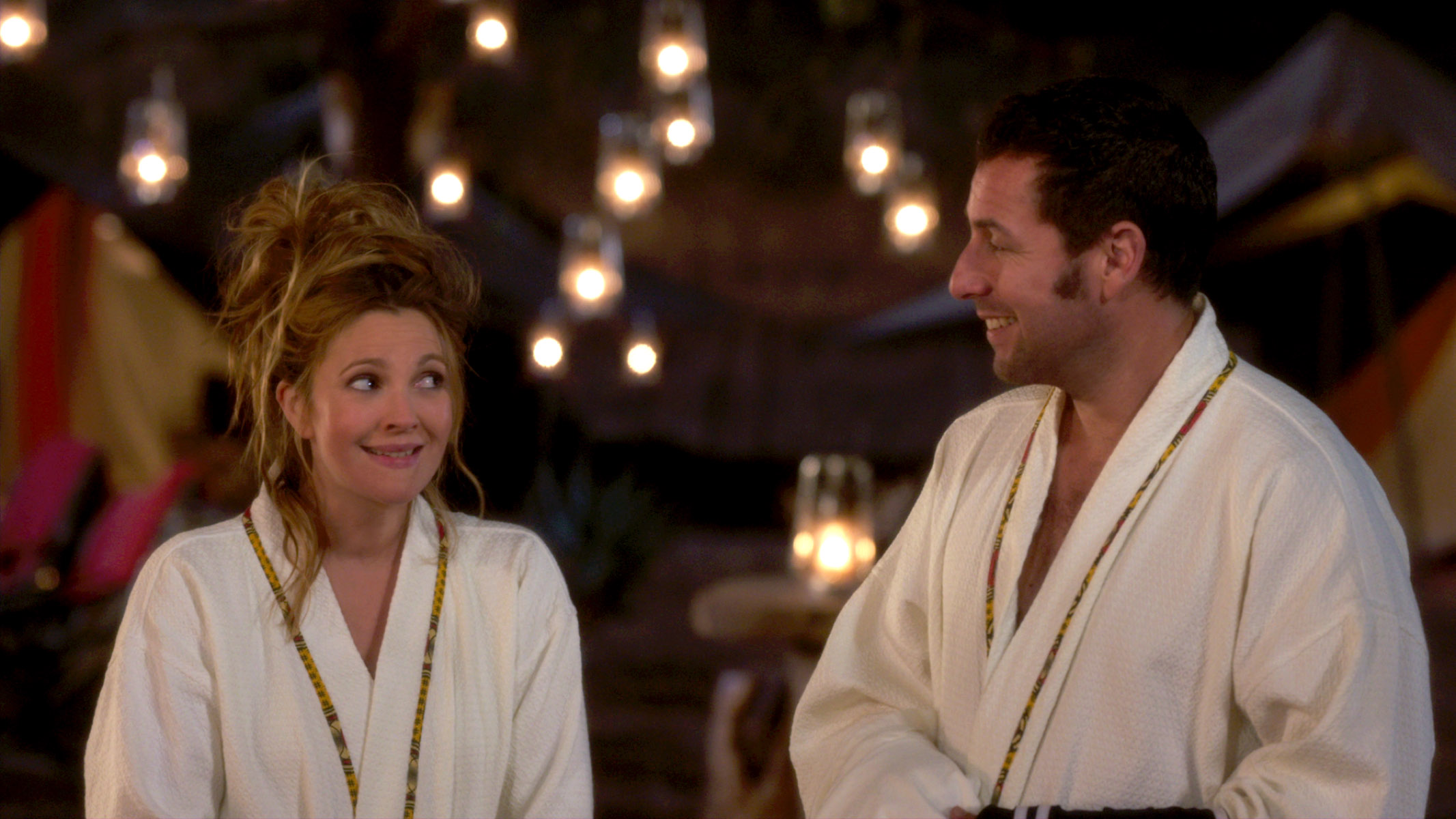 In Blended, single parents Jim Friedman (Adam Sandler) and Lauren Reynolds (Drew Barrymore) have an awful first date and want nothing to do with each other. Jim is the manager of a Dick’s Sporting Goods store and a widower raising three daughters as if they were boy after his wife died of cancer. Lauren is the owner of Closet Queens closet organizers and a divorced mother of two sons, who hope she’ll get back together with their dead-beat dad (Joel McHale).

The movie begins with Jim and Lauren fumbling through a disastrous blind date at Hooters. The two go their separate ways, but continue running into each other. Eventually, they and their five cumulative children end up booked into the same suite at a South African resort during a weeklong event designed for the newly re-married to get better acquainted with their stepchildren. How they end up booked into the same suite doesn’t really matter; it involves Lauren’s partner (Wendi McLendon-Covey), some Dick’s Sporting Goods “integration,” and some finagling that the movie never bothers to depict or explain.

Lauren, Jim and their families end up assigned to the same dining and tour group, and that Jim has to spend the whole trip pretending that his last name is “Theodopolous.” Jim’s daughters Hilary (Bella Thorne), Espn (Emma Fuhrmann), who was named after his favorite television network, and Lou (Alyvia Alyn Lind) and Lauren’s sons Brendan (Braxton Beckham) and Tyler (Kyle Red Silverstein) all hate each other at first, but over a series of comic misadventures come to like each other and each others’ parents.

Jim isn’t a particularly bad parent: his children are tomboys, some by nature and others by accidental design, but their problems take outside forms like being confused for a boy or embracing odd coping mechanisms in response to their mother’s death. Lauren doesn’t seem to be a terrible parent, but her children nevertheless behave like raving lunatics just because she tries to fill their lives with structure.

Although Blended strives to celebrate alternative family units – the kitschy hotel decorated in all the African stereotypes including elephant statues, lion paintings and zebra stripe bedsheets, turns out to be hosting a series of activities designed to bring step-parents closer to their new children – it concludes with the same old conservative message: that kids need two parents, one definitively feminine and the other undeniably macho. Jim teaches Lauren’s sons about maturity through reckless endangerment and sports, and Lauren fills the shoes of Jim’s recently deceased wife by tucking his daughters in at night and giving them makeovers.

However, like many of Sandler’s movies, Blended revels in juvenile comedy, like rhinos mating in the background for no reason or lions devouring a baby boar in front of the two families. The South African setting is meaningless, merely an excuse to force Jim and Lauren to spend time together and participate various activities like ostrich riding and ATV chases.

Blended marks the third comedy collaboration between Sandler and Barrymore, however this is not their finest work together. While some scenes are funny, the first half of the movie is slow. It doesn’t pick up until the two families arrive in Africa. While Sandler and Barrymore trade barbs, none of their witticisms are particularly witty. The viewer gets the impression that the movie is little more than an excuse for Sandler and his friends (including Kevin Nealon, Terry Crews and Shaquille O’Neal) and family (Sandler’s wife, children and mother all have credited speaking roles) to go on a paid vacation. The two actors’ previous romantic comedies 50 First Dates and The Wedding Singer were much better and stronger out of the gate. Rated PG-13. Opens May 23, 2014.