Vinifera Is a Hidden Gem in Reston Westin

Just outside the Beltway and feet from the Dulles Toll Road is one of Reston’s best kept secrets. Vinifera Wine Bar & Bistro is tucked inside the Westin Reston Heights located at 11750 Sunrise Valley Dr.

When you think of hotel restaurants you most likely think of rubbery chicken and over-priced steaks, unless you’re at one of the top hotels like the Mandarin Oriental, Four Seasons or Ritz-Carlton. But Vinifera makes the trip to Reston worthwhile, even in rush hour traffic.

Inside, you can dine in the bar, which features 38 wines by the glass, 300 wines by the bottle, 27 bottled beers and six on draft, or in the dining room, but a nice relaxing meal on Vinifera’s garden patio transports you outside of the city. If it cools down in the evening, there are three handcrafted, custom-made Hawaiian fire pits to keep you warm. 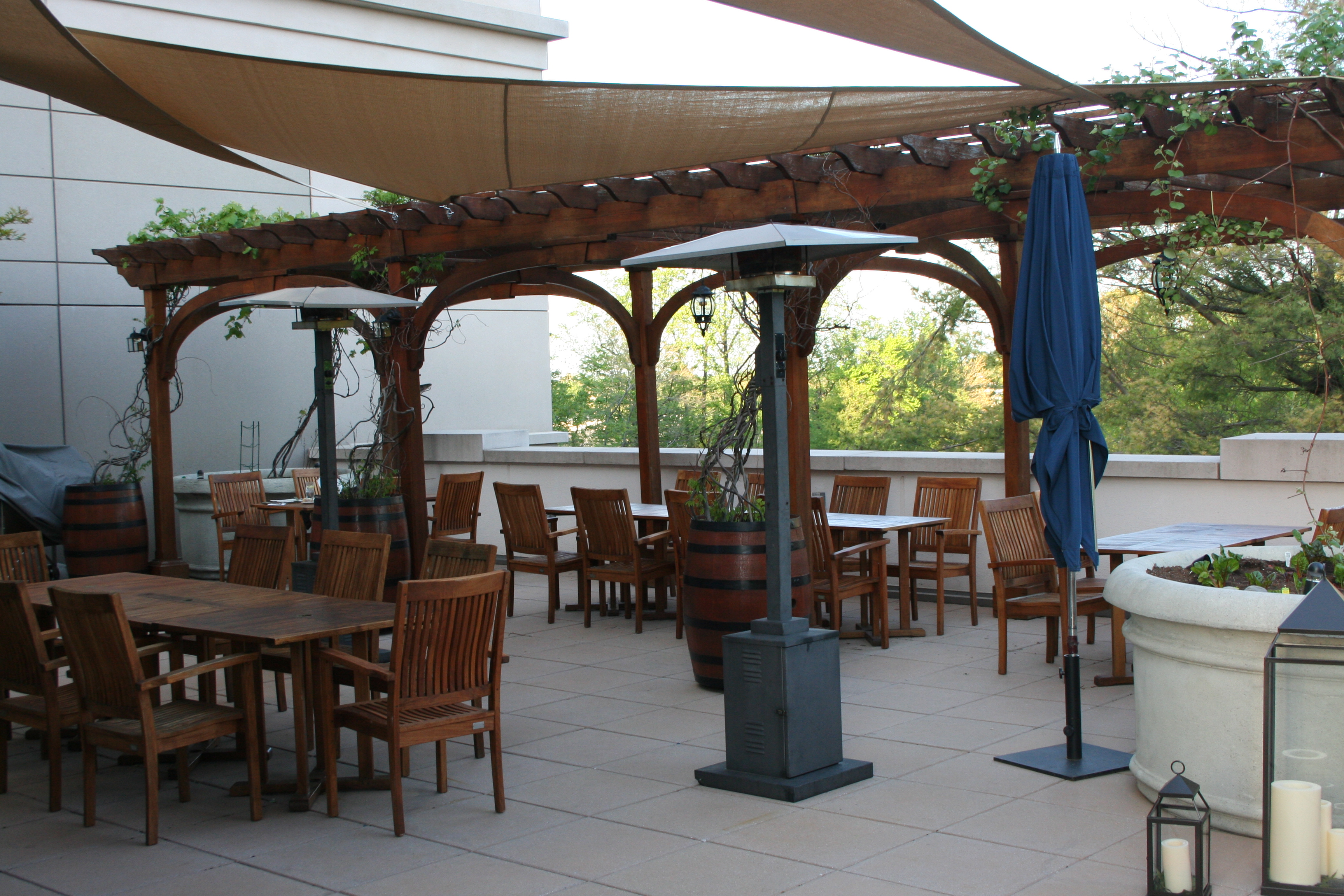 The patio garden includes seating as well a pots growing vegetables and herbs for the kitchen. (Photo: Mark Heckathorn/DC on Heels)

The patio seats 70 and has a mix of tables and chairs, as well as lounges and coffee tables. There are also awnings and a pergola along with trees to provide shade and several large concrete planters and wine barrels where Chef John-Michael Hamlet grows 12 varieties of heirloom tomatoes, leeks, Swiss chard, bell peppers, basil, lavender, peppers, fresh mint, oregano, thyme, figs and apricots. During the day, you may even catch Hamlet tending to his gardening and watering the plants, which are used in recipes as well as drinks.

Sitting on the patio a week ago, I enjoyed a quiet dinner despite being a stone’s throw from the toll road. There was a nice breeze blowing through the grape arbor. As I sipped my Foris Vineyard’s 2012 Moscato that sommelier Nicole Bernard recommended, I wouldn’t have known I was in Reston with the plants and trees shielding diners from the highway.

Inside, the dining room is decorated in rich woods and beiges with floor-to-ceiling windows while the matching wood bar features a black granite top and wood shelving. There are also high-top tables and stools as well as lower tables and banquettes. 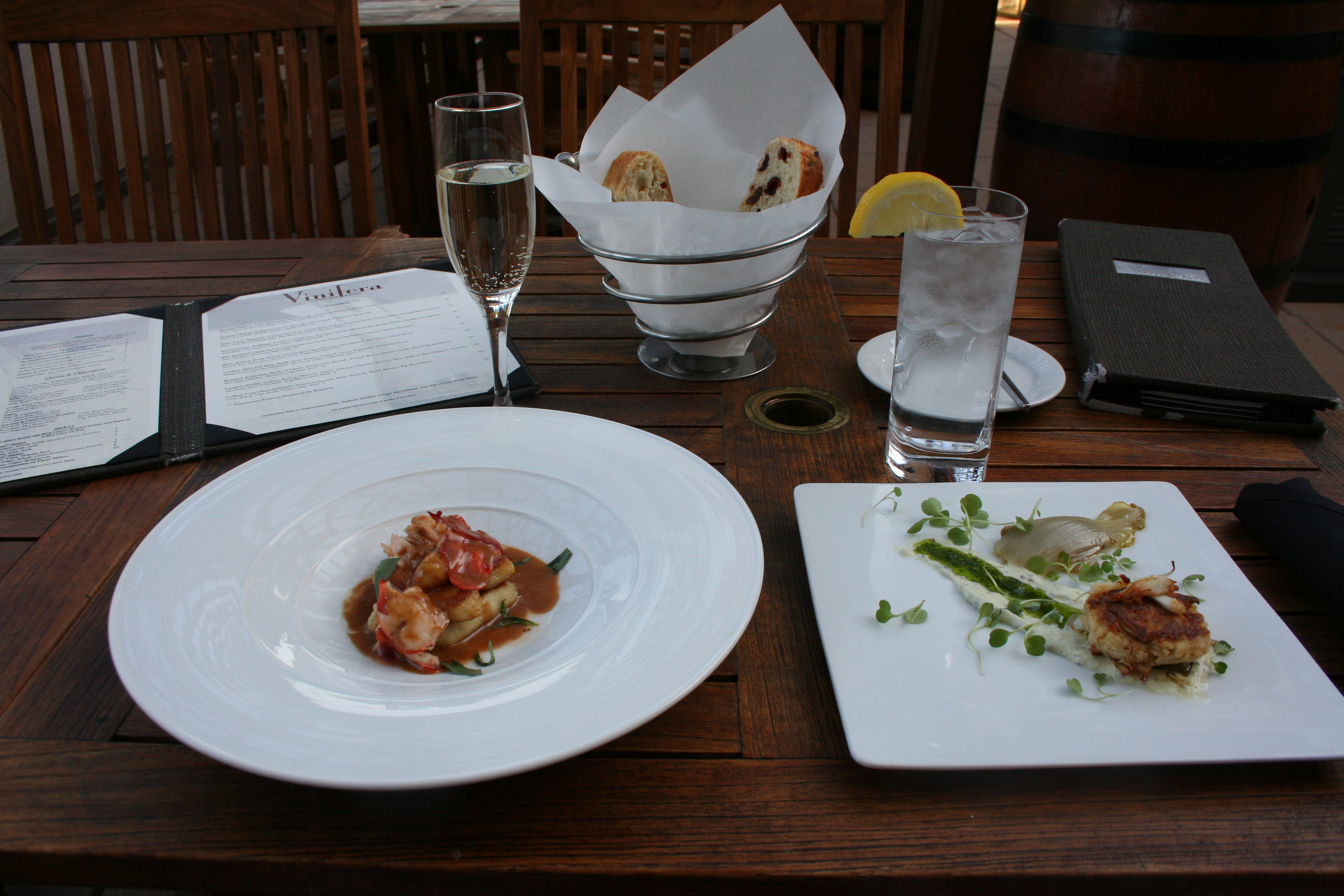 Hamlet features seasonal menus with a Mediterranean and French flair that encourages sharing with small plates priced from $3-$6 each, starters priced from $7-$14, cheese ($12) and charcuterie ($14) boards, sliders ($4-$7 or 3 for $12) and Pinxtos – basically amuse bouches that are a single bite for $1-$2 each. For my starters, I chose the “Seared not Fried Crab Cake” with braised endive and grain mustard crème fraiche and the lobster gnocchi in lobster cream with micro salad small plates. At $6 each, both were excellent. The crab cake was full of crab meat and the gnocchi had several chunks of lobster. 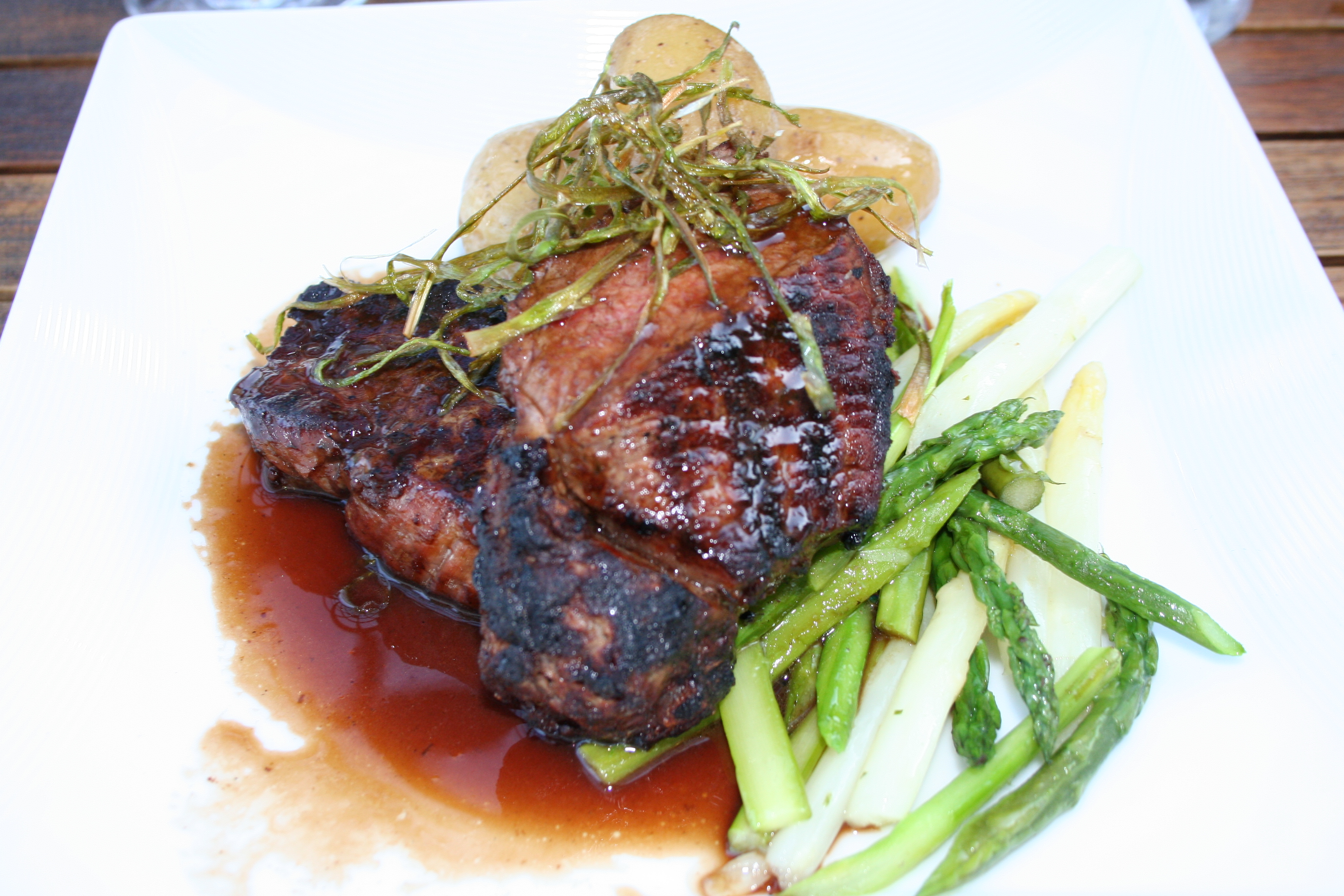 For my entrée I took my server’s recommendation and went with the grilled 1855 N.Y. strip steak with baby potatoes, white and green asparagus and a Zinfandel sauce. The 14-ounce steak had a nice sear on it and was nicely trimmed with no fat and perfectly cooked to my requested medium well.

My only disappointment was dessert. Again, I went with my server’s recommendation and ordered the PB&J, a peanut butter mousse between brioche squares with Concord grape ice cream. The peanut butter mousse was excellent – light and fluffy. But served between pieces of brioche didn’t really strike me as a dessert and the Concord grape flavor wasn’t very prominent in the ice cream. 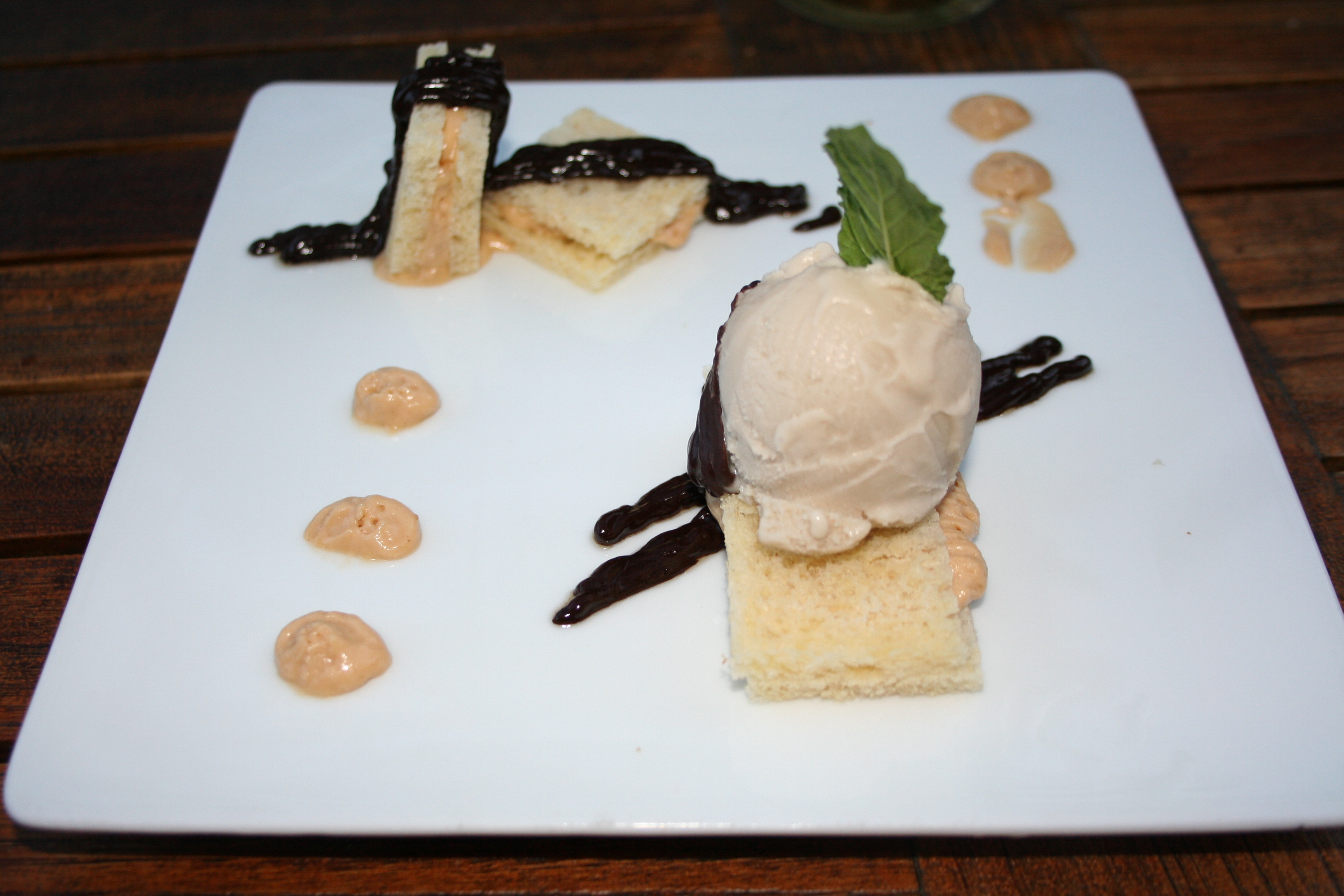 The dessert menu is broken down into tasting desserts or smaller bites ranging from $3-$4 and the larger main desserts, which cost from $7-$9. Next time, I think I’d opt for the tasting desserts, which include a mini trifle with blackberries, cassis and vanilla cream; the banana pudding sandwich made with Nilla Wafers, banana brulee and chocolate; or the pear ravioli with cinnamon, phyllo dough and a brandy vanilla reduction. Or maybe the deconstructed Black Forest cake with pot du crème, chocolate ganache cake and dark cherries or the warm mixed berry soup with Mascarpone mousse and pastry boats, both from the main dessert section.